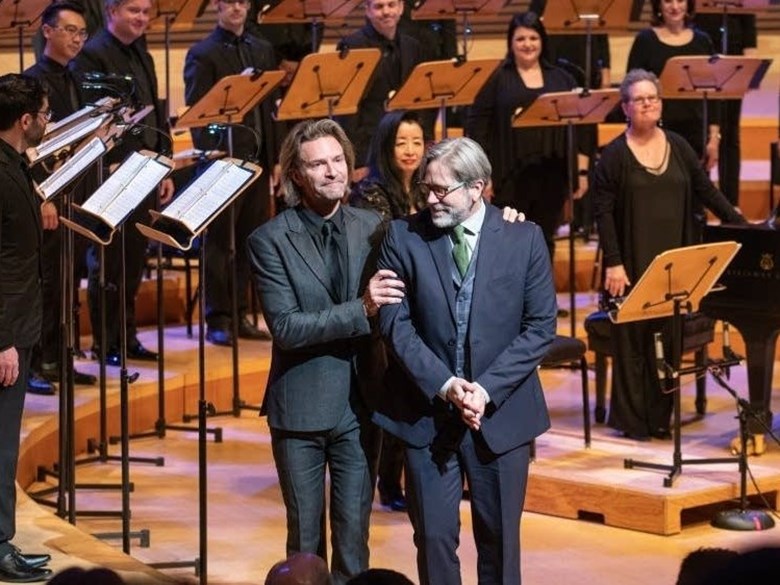 Eric Whitacre and Charles Anthony Silvestri at the premiere of 'The Sacred Veil' with the L.A. Master Chorale.

"I started playing piano when I was four or five, I think. So I started improvising and then eventually sort of composing at some point. And, and that's so the piano has always been my personal way of expressing myself as a musician."

"We've talked about this a couple of times, so we can't remember never being best friends. I don't remember even our first meeting. I just remember there was the time before Tony in my life and then the time afterwards."

Composer Eric Whitacre and poet Charles Anthony (Tony) Silvestri, first met in college choir at the University of Nevada. Eric was an undergrad, and Tony was working on his doctoral thesis. Because of that chance encounter, they became lifelong friends and collaborators.

Their latest project, The Sacred Veil, is the journey of a soul crossing the threshold into the next world. For Tony Silvestri, it also became a way to come to terms with his own grief after the loss of his wife, Julie, to breast cancer.

I would imagine that it was that sense of closeness and trust that allowed you, Tony, to be able to set a poem on Eric's piano three years ago that became the seed for this newest project that you're working on.

(Tony) "I had a long time to think and to grieve and not to grieve as we'll talk about. But this first movement of the piece represents a kind of 35,000 foot view of everything that I've learned about this grief process and about life and death and eternity. And it's in that poem that this idea of the sacred veil between this world and eternity first sort of took shape.

Do you by chance have that poem in front of you or you could read it for us?

(Tony) "I do. I do. Whenever there is birth or death,/The sacred veil between the worlds/ Grows thin and opens slightly up/ Just long enough for Love to slip,/ Silent, either in or out/ Of this our fragile, fleeting world,/ Whence or whither a new home waits./ And our beloved ones draw near,/ In rapt anticipation, or/ In weary gratitude, they stand;/ Our loved ones stand so close, right here,/ Just on the other side/ Of Eternity."

Eric, when you first saw that poem, what was the first thing that came to your mind?

(Eric) "I remember, it was at the piano when I sat down. Usually, by the way, my process is to memorize a poem and live with it for days or weeks or sometimes months before music starts to emerge. And here I just started reading it and started playing along. That rarely, rarely happens — the music was already there and I could see the structure the moment I read it. Oh, there it is. There's the piece. There's, here's how it opens, here's where the climax is, here's how it ends. All of the music is built into the poetry itself, which is Tony's great talent as a poet, I think is his ability to to fill his words with musical possibility."

(Eric) "I started for myself. I said, let's just start with the pillars of of a story. And so the first thing I asked Tony to write about was the moment of Julie's death. Tony was there in the room with her. And so I asked him to write about that. And then I gave him very, very specific music that was taken directly from this this first movement that we'd already written, saying it needs to be in this exact meter. Like, OK, let's just build this pillar and see what we've got. And that was the movement 'You Rise, I Fall,' which is the second to the last penultimate movement."

(Eric) "The next thing I asked Tony to write about was the the moment that he knew that he was in love. And that's the third movement which is called "Home."

What has this project meant to each of you and your friendship?

(Tony) "I think walking this journey together, and I couldn't have walked it without Eric's help and without his support with him holding my hand and encouraging me. I feel more strongly now that he's my brother and I know that he experienced these things with me and has encouraged me to come out the other side as a stronger man, as a stronger person."