Ear To Ear: Musical Mishaps In The Life Of A Professional Pianist

It’s been a bit since I’ve added to my Musical Mishaps portion of this blog, where I share some of my most embarrassing or horrifying public moments onstage(You’re welcome!). So, the time feels right for a second installment! If you missed the first round, check out our Ear to Ear from August 2019 and have a good warm up laugh.

They say truth is stranger than fiction. And in fact, my life constantly proves this little saying true. You couldn’t make these situations up! The pieces I’ve chosen for you are the ones I was about to perform when these Musical Mishaps occurred.

I was at a wonderful outdoor venue in the Sierra Nevada, during a hot and dry August. We were sound-checking for a large program to be performed later that evening, and there were easily 40-50 musicians onstage. Now, mind you, the glory of this venue is partially the fact that it is nestled in the back of a narrow canyon. One road in, one road back out.. Sensing where I’m going with this? The weather suddenly became cloudy and extremely windy, but no rain at all… Next thing we knew, CRACK! Dry lightning. Dry lightning that hit the adjacent side of the canyon wall, the one filled with dry brush and dead summer trees. Smoke immediately rose, as did a swelling of panic.

The only way out was that one dirt road, and between us onstage and that road was the side of the narrow canyon that had just caught fire from the lightning strike, and the wind was howling. Impressively, there wasn’t a moment of hesitation: They called for an immediate evacuation. The kind where you leave everything behind and head for the river that runs adjacent to the road. RIGHT NOW. Most people made a break for it. A handful of people froze and cried. A handful of people clung to their instruments, their most prized (and priceless) possessions, and refused to leave them behind, despite the need to navigate terrain on foot that demanded doing so. But we can stop there.

Cut a few hours later (you know, to make a long story quite short), we made it out without more than a few scrapes and bruises. And thanks to the heroism and fast actions of the staff, (including some firemen who serendipitously happened to be working there already), and the quick response time from local forces, we lost nothing. No physical damage, not a single priceless instrument destroyed. Shake a firefighter’s hand if you see one!

This piece almost has a frantic, running feel to it… Perhaps I should have taken more notice of that when selecting my concert program, because it most definitely proved to be a musical premonition of sorts.

We can call this Musical Mishap my geography lesson, or my how-NOT-to-travel-internationally lesson. (Hey, I was in college, everyone needs one of those right?) I was headed to Italy to perform in a wonderful summer music festival high in the Italian Alps, located in Völs am Schlern. (Did that umlaut just give you pause? It should have...) It all started when my transatlantic flight was significantly delayed, and we (my two fellow American performers and I) landed in Milan well after the festival shuttle had departed without us.

There we were, left to arrange last minute transportation in a foreign country to a festival located somewhere still several hours north, after all the English-speaking customer service booths had closed. It probably still would have been fine, had the bag with the phone chargers and festival contact papers made it to Milan with us. (We were young — I have never put items like that in my checked luggage again, I assure you!)

We told the only semi-English-speaking person we could find our dilemma and the name of the town we needed to be in and they pointed us to a train to board, which, of course, was leaving seven hours later. Fast forward through sleeping on the floor of the Milan train station and almost 24 hours of train travel , and you will find us in Schlern. But don’t celebrate yet. We were in a Schlern alright… at the base of Mount Schlern, AUSTRIA. Apparently there are two places with the name Schlern. The one in Austria is a big bustling town. The one in Italy? A village, only on local maps. The kind stranger had thought surely we had come all the way from America to see the real city (and that darn umlaut only confirmed it for him— It seemed closer to Austrian than Italian), and had put us on a train to an entirely different country.

Fast forward through the tears, fast forward through sleeping on a bench outside waiting for a return train that would not come until the next morning, fast forward through the Italian army demanding our passports at gunpoint (truth), and find us dropped off in real umlaut-bearing Völs am Schlern at last, having gotten lost in Europe for four days and missed our first festival performances entirely. (Without a word from us, because our phones had all died long ago of course.)

What happens next while we are standing mid-cobblestone street with our luggage, wondering where the festival actually was in town? A thunderstorm of course. The skies opened up with lightning and dumped an inconceivable amount of water on our uncovered bodies and suitcases. Viva Italia!

(And in case you’re wondering, yes, the festival did actually go off without a hitch from then on out! Some of the best performances of my life, and some lifelong friends and connections made as well. Balance in all things, I suppose…)

Here’s the rest of the sonata if you’re interested!

Come to think of it, this piece can also feel a bit like frantic running, which also turned out to be predictive! I need to move away from this style of music, clearly.

Anyway, this mishap is just… dumb. In a different Italian festival, this one in Vipiteno (considerably easier to get to!), I was housed in a wonderful old bed and breakfast. Even the keys to my room were the original skeleton keys from the late 1800s when the home was built! I thought this was all very charming, even though you had to lock your door using the skeleton key from the inside of your room as well. (Uh oh...)

At this festival, we comfortably had almost a week of practice and rehearsal before performances began, and of course, I had zero trouble with those keys during that time. It wasn’t until it was time for my first solo recital (literally time, as in 45 minutes away) that the ancient skeleton key decided to break in the lock, locking me INTO my second story room as I was trying to exit to perform. Of course everyone had already left for the show, and of course there was no one to hear me pounding on the door and yelling! 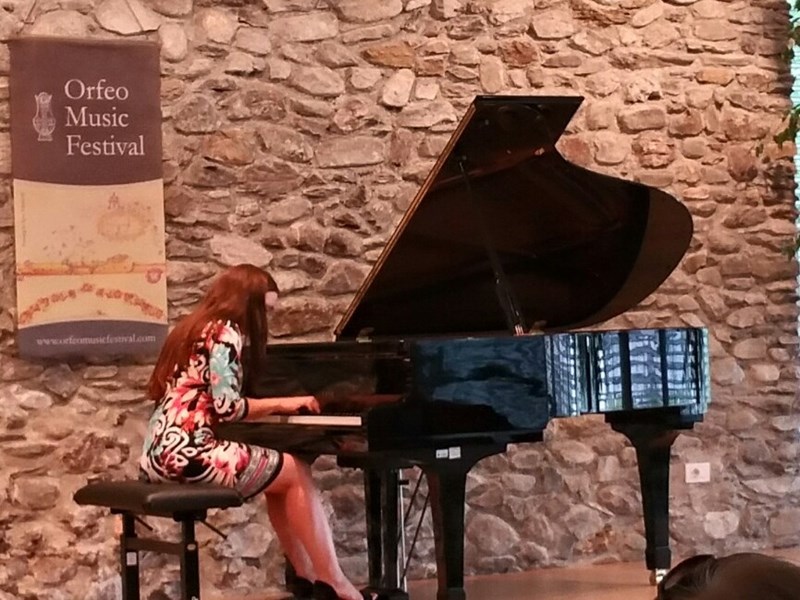 Jennifer Reason performs at the Orfeo Music Festival in 2015, site of the Musical Mishap #3 where a key broke in a lock, shutting her into her room right before her performance.Courtney Tackitt

I kicked and yelled so loud that eventually (after at least 20 minutes) a dog started barking, which brought a local child out to investigate. He spoke no English but understood an upset tone enough to go get a cook from next door, and that dear wonderful person was able to break me out by pounding various implements into the keyhole from the outside. This is Europe though, so everyone walks… I may have been broken free but I still had to run almost a mile on cobblestone to get to the concert venue!

I flew through the door as they were announcing my name onstage and people were clapping. And that’s how my first performance happened: I ran from the street directly onstage without so much as pausing, and played gasping for breath from running, with a tear-stained face, sore fingers from pounding so long on my door, and...  of course, my skirt was unraveling from getting it caught on something sharp in my run over. “Hello everyone, I’m from California. Hopefully you enjoyed my recital today.” Wow.

As they say, the show must go on!

To hear the entire 6 movement suite, check out this album.

Listen to our full Ear to Ear playlist below: