Ear To Ear: Here’s What CapRadio’s Classical Hosts Are Loving This November

Each month, our classical hosts bring you some of the pieces that struck a chord for them in our Ear to Ear playlist. This November Kevin Doherty and Jennifer Reason will be performing at the Festival for New American Music. They share some of their excitement for the festival in this month’s Ear to Ear. And as we all turn our clocks back, Victor Forman takes us on a classical exploration of time.

It’s that time again… The leaves are starting to change, the sunlight is starting to feel a bit thinner, and the air has a morning chill. That can only mean one thing: it’s the season for the Festival of New American Music (known to fans as “FeNAM”)!

As an alumna of CSU Sacramento and current pianist in their Ensemble-in-Residence, Citywater, the Festival of New American Music has been a staple of my every November for well over a decade now. This is the country’s longest-running free new music festival, and it’s in Sacramento! Color me proud!

This year is the 42nd annual festival and will feature incredible performers and living composers from all around the country. As is only appropriate then, my November Ear to Ear is all about highlighting the offerings of this great festival.

But don’t get scared! This music will undoubtedly surprise you. It is not the academic or atonal sound that can often be associated with the words “new music.” Give it a chance. It’s beautiful and approachable, and dare I even say, moving. And best yet, it’s of our own time and our own country.

I was a huge fan of Frank Ticheli even before he was chosen as the keynote for the 2019 Festival of New American Music. He is in the vein of Eric Whitacre, for those of you who are familiar, composing for both acapella and wind ensembles. His expression in both avenues is just lovely.

I’ve programmed this song several times for my own vocal ensemble to perform, and I think the poignant words (which he also wrote!) are particularly applicable to our current day:

Sing, be, live, see
This dark stormy hour
The wind, it stirs
The scorched Earth cries out in vain
Oh war and power, you blind and blur
The torn heart cries out in pain
But music and singing have been my refuge
And music and singing shall be my light
A light of song, shining strong
Hallelujah, hallelujah
Through darkness and pain and strife
I'll sing, I'll be, live, see
Peace

Since Ticheli is also a wind band composer and is in fact here at the festival to do wind band-related things, I guess it’s only fair to include a nod toward that second half of his oeuvre as well. I chose this arrangement because I’m an old sap when it comes to the American folk tune “Shenandoah.” Maybe you are too.

I’ve sang and played it since I was a small child, and I have imagined the Missouri River my whole life because of the words to this song. (“…Look away, we’re bound away…Across the wide Missouri…”) I finally just this year got to see that Missouri River in person, while on a concert tour in middle America. I even included a picture I took of my very first glimpse of it! Of course now this piece is all the more poignant to me. I hope you love it in this setting for brass as much as I do. 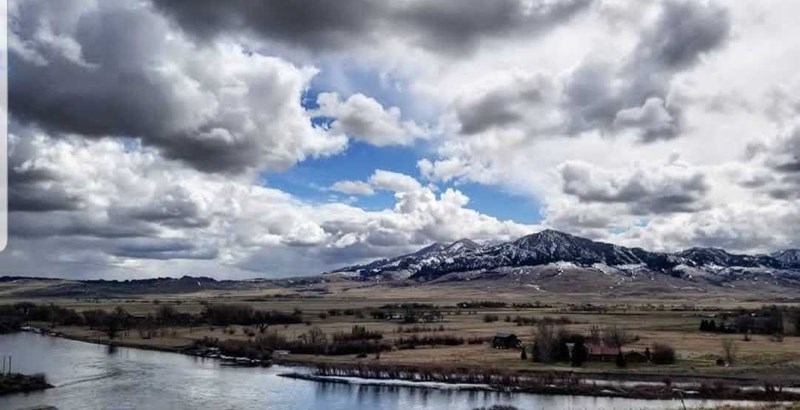 It’s going to be hard not to “fangirl” on this one, but I’ll do my best. The composer is Judd Greenstein, who is also an American, as all the composers at the Festival of New American Music must be. He’s 40 years old and living in New York, passionately advocating for the new music community and writing his own fascinating works as well.

You’ll see what I mean when you listen to this piece. His sheer skill, his passion and interpretation, the overwhelming musicality of his playing… I could go on, but then I’d be gushing. It helps his performance, I’m sure, that this is a special piece of music for multiple reasons. First, it was Greenstein’s return to the piano, if you will. He hadn’t written for the solo instrument since he was 17! What brought him back around?  Mizrahi’s own wedding. This piece was written for him on his wedding day. Touching, isn’t it? I should let the composer speak for himself:

“Whatever the reason, First Ballade brings many of my favorite piano composers to the table: J.S. Bach, Maurice Ravel, McCoy Tyner, Nicky Hopkins, and (of course) Frederic Chopin. There are no quotes, but it has a ‘quotational’ feel, like it’s telling a story. I hesitate to say that it’s the story of my life with, and love for, the piano, but I can imagine that being said by someone else. In any case, it’s a Ballade in the Chopin sense, written for the magnificent Michael Mizrahi, and dedicated to him and Erica Scheinberg on the occasion of their marriage.” -Greenstein

Sac State’s Festival of New American Music is right around the corner and it’s bringing some of the country’s greatest composers and performers to Sacramento. This year we are incredibly lucky to have Austin-based composer Graham Reynolds and former Kronos Quartet cellist Jeffrey Zeigler in town to perform music from an adventurous project pairing composers and scientists. Each composer selected for the project was given free rein to choose a scientist or scientific research on which to base their brand new composition. The year-old album from the Golden Hornet composer lab is called “The Sound of Science” and I’ve selected a few tracks from it for my Ear to Ear playlist this month.

Composer Graham Reynolds is “the brains” behind this project, so I thought it apropos to start with his music. Reynolds told me in a recent interview that though he’s had a lifelong interest in science,  he found Dr. Kristen Harris’ work by way of a mere Google search. This meeting of minds proved, however, to be destiny (not scientifically proven, by the way). When he contacted the neurobiologist and University of Texas professor, she exclaimed that she had often thought about having her work set to music! After sending a video illustrating her research to Reynolds, the Golden Hornet founder put his film scoring chops to work in constructing the first track of the album. Below is Harris’ video, along with the music video for Reynolds’ piece.

Gambian composer Foday Musa Suso was born and raised on a peanut farm, so it seems he already had a kindred spirit in the botanist and chemist George Washington Carver. Carver was often referred to as “The Peanut Man” and created over 300 uses for the plant-based product. Suso uses his personal experience and his research of Carver to tell Carver’s story in “Salumba,” and he also aims to portray a shared appreciation for farming as a life force. Suso used his preferred instrument, the 21-string kora, to compose the music with a peanut farm aesthetic in mind. Zeigler does a great job finding that kora sound on his cello while adding a surprise of his own about midway through the piece.

Composer and guitarist Sarah Lipstate suffered from severe stomach pains in college. In order to isolate the problem, Lipstate underwent a specific kind of treatment that involved ingesting foods with radioactive isotopes. Since then, much of her work has been inspired by a desire to see beneath the surface. As a “lab partner” Lipstate chose the only person to win the Nobel Prize in two different scientific fields and who developed the theory of radioactivity, 19th- and 20th-century chemist Marie Curie. “Radiation in Moderation” is a haunting piece that takes the listener on a journey to the depths in hopes of uncovering the secrets of unknown terrain. The guitarist Lipstate finds a fascinating balance between remaining true to Zeigler’s cello while incorporating sounds as though they were written for the guitar.

As we gratefully gain an extra hour on Nov. 3 by turning our clocks back to Standard Time, I thought it timely to look at time and clocks in music for this month's Ear to Ear.

Franz Joseph Haydn composed twelve symphonies, #93-104, specifically for London audiences. These were enthusiastically received and earned him a pretty penny. Number #101 earned its nickname "The Clock" for its ‘ticking’ rhythm in the second movement.

A graduate of Harvard and Columbia, contemporary American composer Paul Moravec won the Pulitzer Prize for Music in 2004. His composition from 2001, “The Time Gallery,” considers some ways we mark time: church bells, ticking clocks and the human pulse. The second movement, The Time Machine, ponders our mechanical measurement of durations and intervals with clocks.

Clocks and time are all-important in the story of Cinderella, and my favorite classical music take on the fairy tale is the ballet by Sergei Prokofiev. With scene after scene of charm, drama, and romance — much of it sounding slightly askew in Prokofiev’s mid-20th century musical language — it is perhaps my favorite ballet score overall. And in this scene the clock famously strikes midnight, a reminder that we all have our limitations of time.

Leroy Anderson composed such light classical delights as "The Typewriter" and the holiday favorite "Sleigh Ride." In 1945 he composed "The Syncopated Clock" for the Boston Pops Orchestra, where it had its premiere. Recordings of it made in 1950 and 1951 remained in the Top 30 for weeks and WCBS-TV used it as the theme for “The Late Show” of movies starting in 1950 and for the next 25 years. The last notes of this music ends my Ear to Ear time this month by going out of sync and slipping its mainspring!

Listen to our whole Ear to Ear: Classical playlist below: