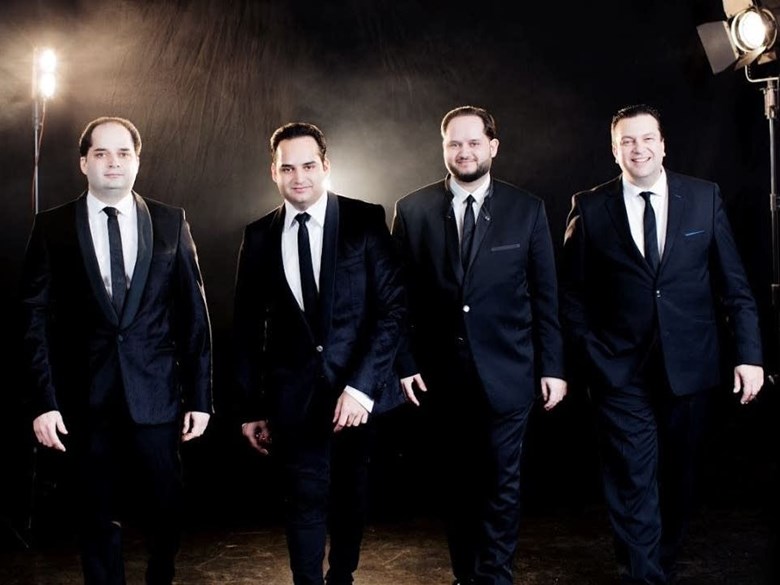 "Where is your personality inside the piece? Can I create my own music? And yes you can, of course you can. Every human being is a unique one. Everybody has another fingerprint. And you have to show the world who you are and where you come from."

Sage advice from Julius Darvas, double bassist of the four-member Janoska Ensemble. Ondrej and Roman Janoska are the group's violinists, and Frantisek Janoska is the pianist. Here's how Frantisek and Julius describe the Janoska style, which is imprinted on their new recording, Revolution.

Frantisek: "You know, before in Baroque times, but also later, big musicians like Bach, Mozart, Paganini and Liszt, they can all improvise, and this is, I think, lost in classical music, and we want to bring it back. In the same time, we make all our arrangements by ourselves, and we compose also new pieces."

Julius: "And it's of course based on classical music, but we play every genre of music. There is Latin American music. There is tango music. Pop, rock, jazz — everything."

You're taking familiar popular music and integrating classical music within those pieces. I want to talk about how you've made use of three different pieces by The Beatles, and I'm wondering what connection you have with them.

Julius: "Yeah, I have to say that we are all big, big fans of The Beatles. And when they make records, they improvise in the studios also. And that was very important for us to go inside the studio and we did two or three numbers that was born in the studio. So it was like improvisation, like a jam session, in the record session."

So you're telling me you went into the studio with the intention of recording Yesterday, and then just accidentally wove in the Prelude from Bach's Cello Suite No. 1 in G major?

Julius: "It was very special because you start to play Yesterday, and Roman said 'I want to play intro on this,' and he grabbed his violin and played the violin like a guitar. And he was playing pizzicato, and then Frantisek realized that the chords on Yesterday, they have very same [chords] to the Bach Suite. And so Roman begins to play pizzicato, the theme from the Bach Suite, the Bach Cello suite. It was matched totally."

What is the whole idea behind calling your recording Revolution?

Frantisek: "We want to have some sound small revolution in classical music, with the improvisation, with the Janoska style. The energy between us and the audience is also very special, they give us so much energy on the concerts, and that's something very special."

Would you say that you are introducing people to classical music through the way you're presenting it? Are there people who come to your performances who are not familiar with classical music?

Julius: "There are many people coming to our concerts who are not in the classical music genre, and they love it. And also teenagers are coming. It's very important to have the young generation to show them that classical music can be playing not so strictly as we know."

Frantisek: "Or, they can can create something new, and you open new doors. And after that, you change a life."