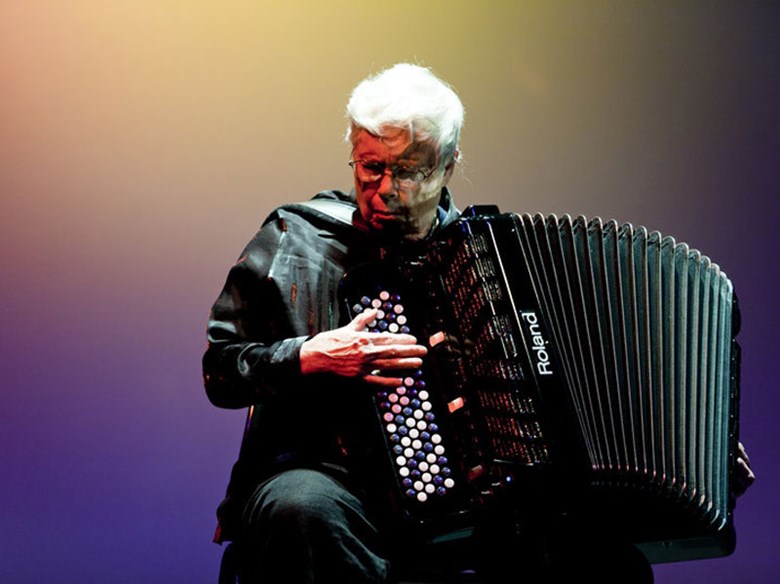 Oliveros created the music theory known as "deep listening." "I found myself listening to long sounds and becoming more interested in what the sound did themselves than what I would do with them," she says.

Vinciane Verguethen / Courtesy of the artist

American composer Pauline Oliveros died on Thursday at the age of 84. She was an accordionist, a teacher and a performer, as well as an early pioneer of electronic music. She dedicated her life to experimenting with sounds and changing the way that people listened to music.

Oliveros' commitment to the inclusion of female composers in the musical canon would also become a part of her legacy. In a 1970 New York Times op-ed, composer Pauline Oliveros posed a question: "Why have there been no 'great' women composers?" In the piece, she went on to criticize the music industry for ignoring musical contributions by women.

Stuart Dempster, Oliveros' longtime bandmate and friend, says Oliveros considered every sound worthy of study. "Her philosophy was to listen to everything all the time — and remind yourself when you're not," Dempster says. "She incorporated everything as musical possibilities — bulldozers, garbage trucks, any kinds of instruments."

Oliveros was born in Houston, Texas, in 1932, and she knew at a young age that creating music was her calling. Steve Smith, who profiled her for the New York Times in 2012, says her childhood environment inspired her. "She was in a household where she was surrounded by music and surrounded by sounds," Smith says. He says Oliveros was intrigued by the eerie sounds she heard on radio serials like Buck Rogers and The Shadow.

Drawing from these early inspirations, Oliveros spent her career experimenting and mixing up sounds. Her song "Bye Bye Butterfly" was inspired in part by melodies from the classical opera Madama Butterfly, an early 20th century opera about an arranged marriage. Smith says Oliveros' radio show influences are evident in this song. "You can definitely hear the sort of spacey, Buck Rogers kinds of sounds, the sort of science fiction squeals and wobbles," he says.

Smith adds that the piece was also a feminist statement. He says Oliveros' take on Madama Butterfly is "using a piece that ascribed the kinds of roles that women were expected to take within the classical music world, and using it in a sort of radically alien kind of setting."

Oliveros became most famous for creating a music theory called "deep listening." The idea is to be fully engaged in the sound and aware of the way nature, vibrations and man-made sounds interact. In a 1976 interview with NPR, Oliveros describes the origins of her method. "I found myself listening to long sounds and becoming more interested in what the sound did themselves than what I would do with them," she says. "And as this work proceeded, I began to become interested in what the kind of listening I was doing did to me and my own internal processes."