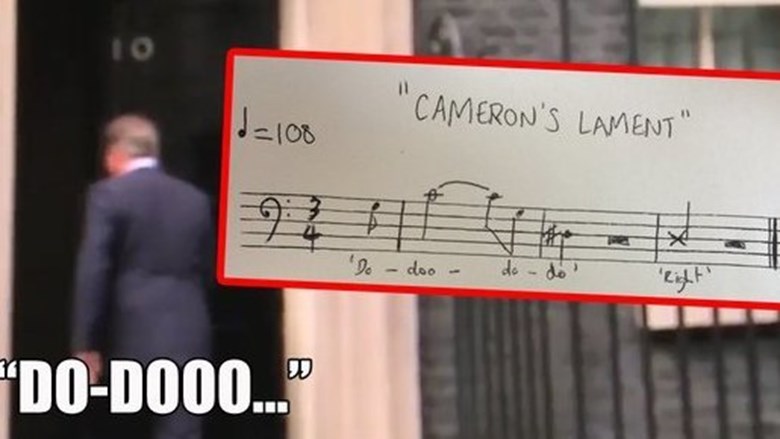 The fallout from the Brexit vote has attracted all kinds of commentary from many corners of the world. But some particularly musically minded observers have been intrigued by the enigmatic codato parting comments made by Britain's outgoing prime minister.

On Monday, David Cameron addressed the media about the person who was poised to succeed him, Theresa May. Cameron's short speech was capped off by an odd moment: After turning back toward No. 10 Downing St., just before he reached the front door, he was captured on mic singing a quite upbeat, though harmonically ambivalent, little four-note tune that ended with him briskly saying, "Right."

By that evening, the British music magazine Classic FM had published a transcription of Cameron's song that editor Daniel Ross cheekily titled "Cameron's Lament" — as well as a detailed musical analysis. (Britishism alert: Ross uses the word "crotchet" for "quarter note." Music-nerd alert: As one would dare to hope, Ross' analysis is indeed gloriously music-nerdy, though in retrospect he has observed that he would have been wise to write an E-flat in his transcription rather than a D-sharp.) He begins:

Let's start with the time signature. A brisk 3/4, with a crotchet roughly equaling 108 a minute, suggests activity. Positivity, even. But 3/4 is not the most immediately stable of signatures. It's easy to feel secure in 3/4, but for just a couple of bars it's disconcerting — especially when starting with an anacrusis. ["Anacrusis," by the by, is the fancy-pants way of saying "pickup note."]

By yesterday, new musical arrangements of "Cameron's Lament" began pouring in, and Classic FM has promptly been rounding them up.

Among them are British composer Thomas Hewitt Jones' "Fantasy on David Cameron," which the composer notes was "written and recorded hastily between midnight and 2 AM on 12 July 2016."

There is also a Bach-inspired fugal improvisation from Venezuelan-American pianist Gabriela Montero. (Montero is rather politically minded in any case: The pianist, who performed alongside cellist Yo-Yo Ma, violinist Itzhak Perlman and clarinetist Anthony McGill at President Obama's first inauguration, also frequently writes and speaks publicly in stinging rebukes of Venezuela's political situation.)

Classic FM has made its exploration of Cameron's humming the leitmotif of the week. They've also published a host of theories about what existing music the prime minister might have been trying to sing (maybe Schoenberg's Pelleas und Melisande?) and a survey of May's reported favorite tunes. At the top of the list: Elgar's Cello Concerto.

But the British magazine certainly wasn't the only entity to take note of Cameron's tune. Stephen Colbert did a segment on it Tuesday night, comparing the prime minister's musical exit to the zippy adieu bid by former U.S. Speaker of the House John Boehner.