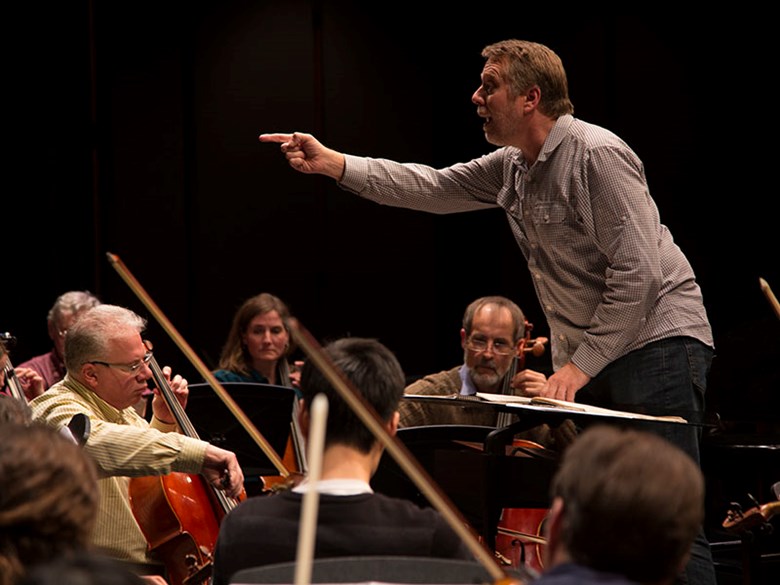 When you see the words “college orchestra” you probably think of a group of student musicians. But students are only a portion of the people who play in the American River College Orchestra, a unique and worldly mix of student, amateur and professional musicians. The orchestra performs tonight and tomorrow night in Sacramento.

On a recent Wednesday night, inside a rehearsal room at the ARC Music Department, Orchestra Director Dr. Steven Thompson leads the musicians through a practice of “Rhapsody in Blue.”

Thompson says he works with a lot of orchestras, including semi-pro groups in the Bay Area and college symphonies.

“But this is really something that’s kind of wacky,” says Thompson, “and way out there in a way.”

Wacky, he says, because this orchestra is an eclectic mix of 75 student, professional and amateur musicians who come from a wide variety of backgrounds. It’s an orchestra where a middle school violinist is sitting next to a former member of the Mongolian National Orchestra.

“I will run into situations that I might not have run into at another place,” explains Thompson. “Maybe a part needs to be simplified for someone so that they can be part of the group.”

And English is not the first language for many of the musicians.

“I see a lot of pointing,” says Thompson. “And the communication on a musical level is pretty good. Sometimes the language level is a little more difficult.”

Some of that pointing is done by the orchestra’s first-violinist, or concertmaster, Bolormaa Damdinjav from Mongolia. “Instead of saying the words in English,” says Damdinjav, “for myself it’s better playing and showing them. I think it’s a very easy way to understand each other, because we have one language, a music language.”

Another professional musician is principal cellist Yuriy Klyushnik. He’s from Ukraine where he played with the Dnipropetrovsk Symphony Orchestra. Klyushnik says it feels good to pass his knowledge onto his younger colleagues.

“I am surrounded with people who play next to me with different levels of playing (abilities),” says Klyushnik. “And I try to organize, for each semester, how to give some good knowledge to play parts to understand them.”

At 59-years-old, Klyushnik is one of the ARC Orchestra’s older musicians.

One of the youngest is violinist Ardalan Gharachorloo. He was born in Iran in 1993 and started playing when he was six years old.

“My grandfather was the concertmaster of Tehran Philharmonic, the capital city philharmonic,” explains Gharachorloo. “After the revolution, they disbanded the whole symphony orchestra. But he was my first teacher. I mean he is the primary reason that I’m in this field, because of the love that I have for music and also for him.”

Gharachorloo is among a dozen ARC Orchestra members who will be spotlighted as soloists during the orchestra’s performances tonight and tomorrow night.

ARC Orchestra Director Steven Thompson calls this unique ensemble of musicians an orchestra for everybody.

“You have to want to be and enjoy being in an orchestra for everybody,” says Thompson. “But I think it’s a very wonderful thing. It’s kind of an intergenerational group of people who put on these wonderful concerts together.”

Both concerts, tonight and tomorrow night, will be at 7:30 in the American River College Theater.