Milne On The Danube: The Great Concert Halls Of Vienna 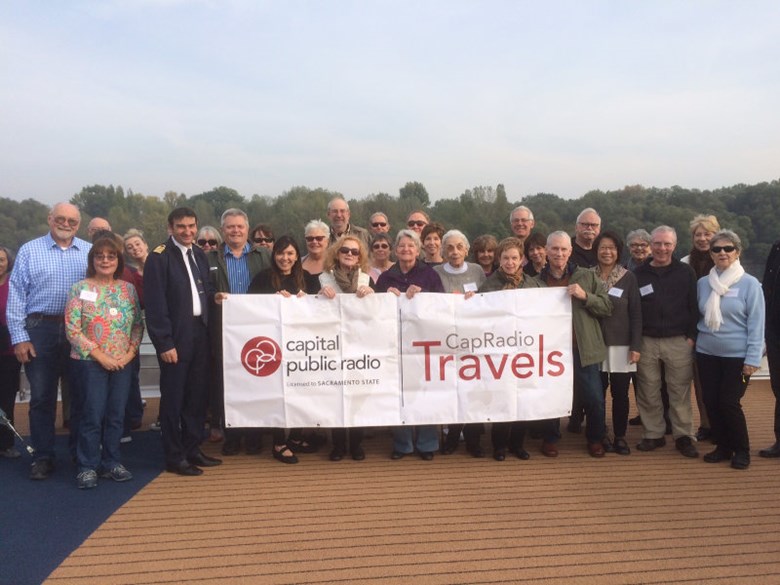 CapRadio Travelers on the sun deck of the MS Amadeus Elegant posing for a picture while cruising from Budapest, Hungary to Austria.

Morning News Anchor Steve Milne is getting an up-close look at some of the most important landmarks in classical music history as part of a CapRadio Travels expedition down the Danube River. He’ll be bringing you stories and pictures of his adventures through Europe’s greatest cities, check back daily for updates. 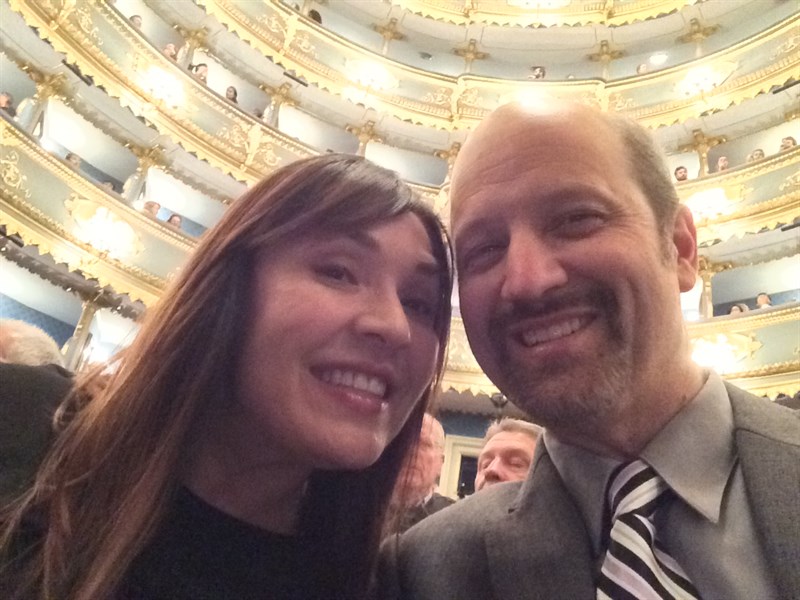 Steve Milne and his wife, Marie Herrera, snapping a selfie before a performance of the Marriage of Figaro in the Estates Theatre in Prague.

The full CapRadio travels crew on the deck of the MS Amadeus Elegant. 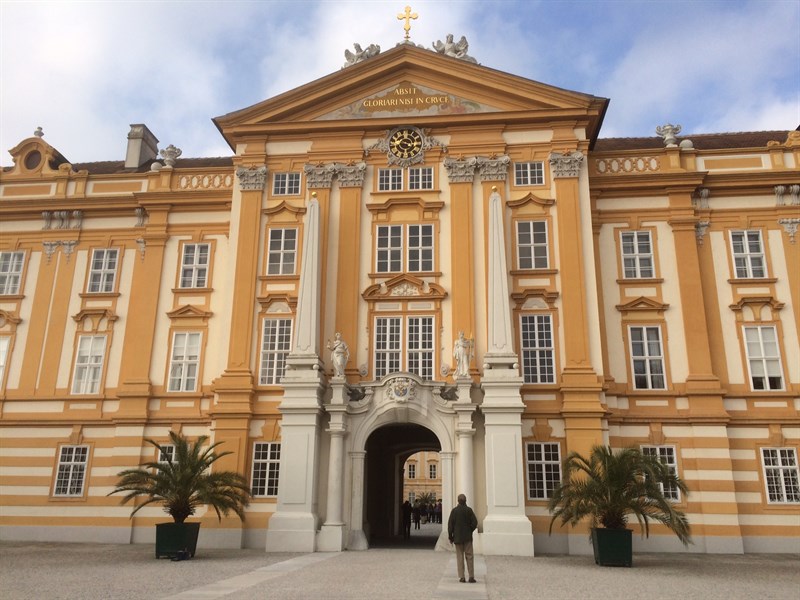 Day 10: We docked in the quaint village of Melk in lower Austria's Wachao Valley and visited the Melk Abbey where Benedictine monks still live and work today. The abbey contains many significant religious and historical artifacts such as skeletal remains of Catholic saints. 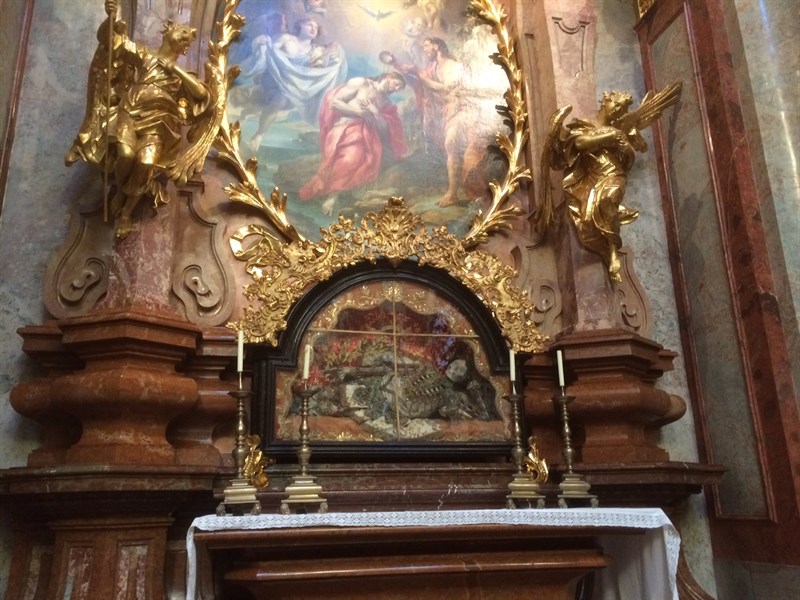 We also visited a restaurant and sampled some of the white wines the Wachao Valley is famous for including Sauvignon Blanc and Riesling. 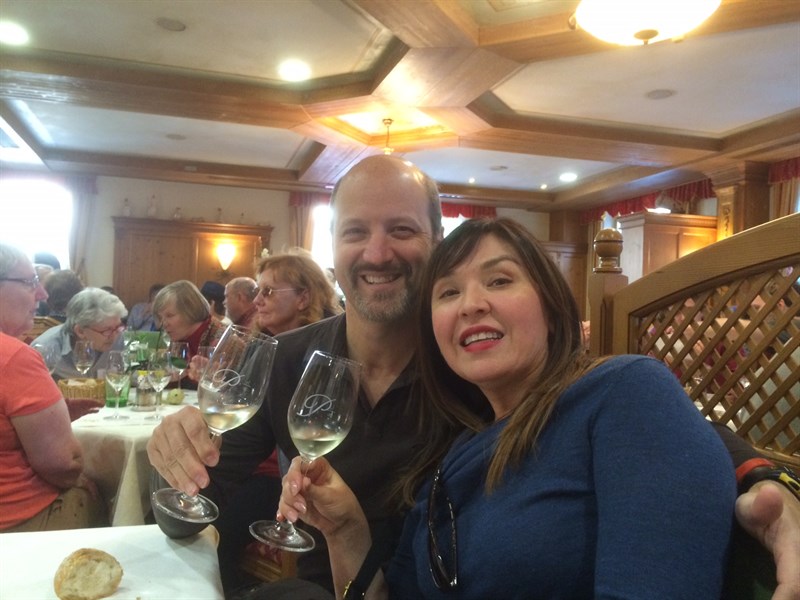 A very relaxed day and the perfect way to end our excursion along the Danube.

Day 9: This morning we arrived in Hainburg, Austria for an excursion to nearby Vienna - where more famous classical music composers have lived than any other city. 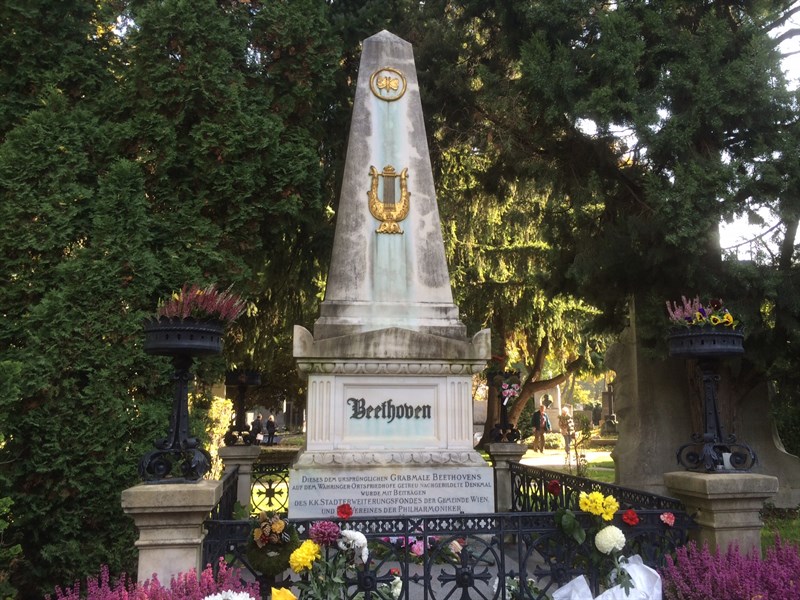 But before we reached the center of Vienna, we stopped off at Zentralfriedhof - a huge cemetery where many of those composers are buried, including Beethoven and Brahms.

While in Vienna we toured the Musikverein - a concert venue. This is where the annual New Year's concert with the Vienna Philharmonic is telecast. 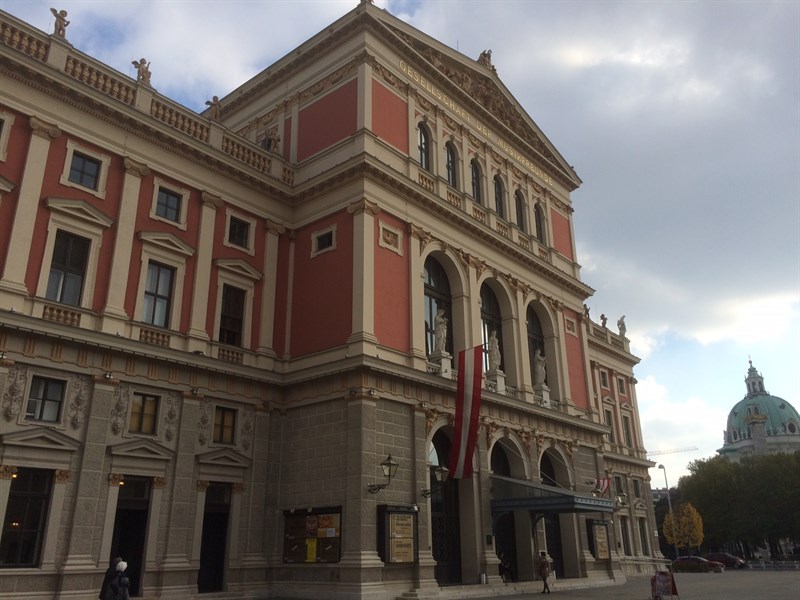 We also checked out the Kunsthistorisches Museum (or the Museum of Art History) that dates back to 1891. It sits across from the Museum of Natural History. 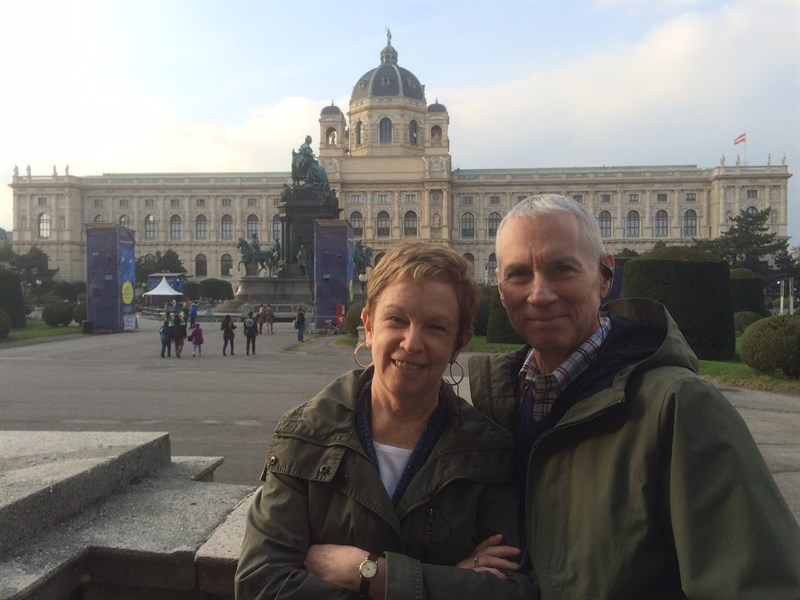 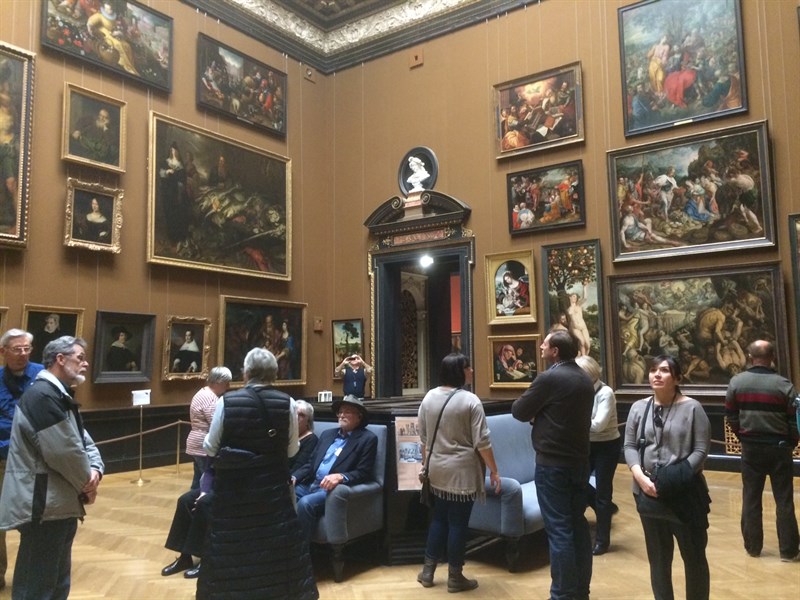 Day 8: CapRadio travelers began Sunday in Budapest in a variety of ways. Some attended mass at Matthias Church. Others took thermal baths at the Hotel Gellert. And a few went shopping for souvenirs in nearby gift shops. 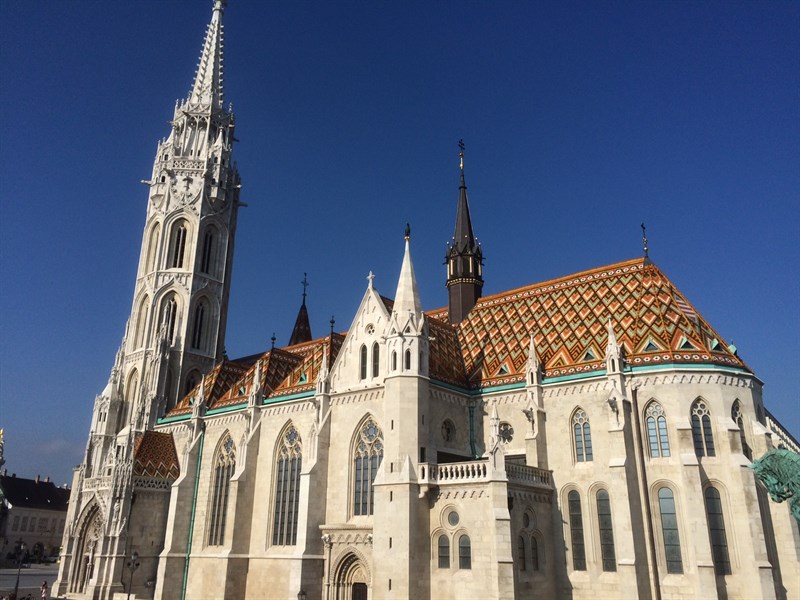 At 1:00 p.m. we set sail for Hainburg, Austria and met on the sun deck for a group picture. We cruised through the beautiful Danube Bend on our overnight voyage back to Austria. 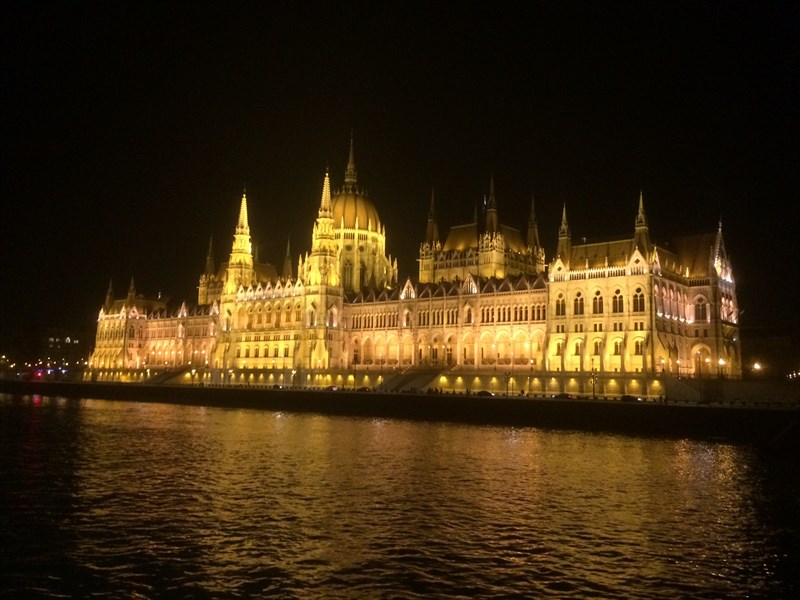 A view of the House of Parliament in Budapest during a nighttime cruise of the Danube. Steve Milne / Capital Public Radio

Day 7: We arrived in Budapest, the capital of Hungary. Our first stop was the Hungarian State Opera House where we stepped inside for a tour. Composer Gustav Mahler directed the Opera House in the late 1880s. 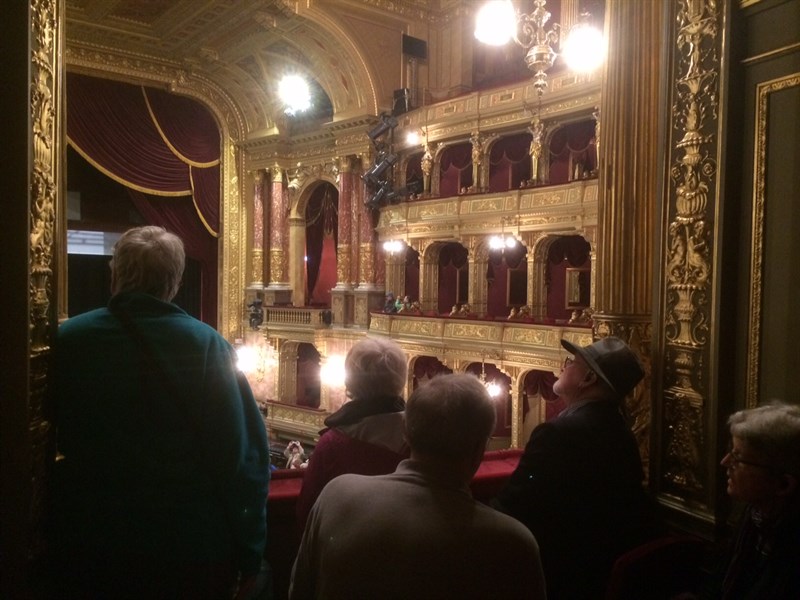 Then we took a bus to the Buda Castle District. That's where we saw Matthias Church, a Gothic-style structure built in the second half of the 14th century.

Near the church is the Fisherman's Bastion, a neo-Gothic terrace providing panoramic views of Pest, Hungary and the Danube River.

Later in the day we visited the Franz Liszt Academy of Music, a concert hall and music conservatory.

The day ended with a scenic nighttime cruise, passing magnificently floodlit buildings on both sides of the river, including the illuminated Charles Bridge.

Day 6: This morning we reached the historic city of Bratislava, which was founded more than 2,000 years ago. Today it's the capital of Slovakia. Our sightseeing tour covered the city's major sights including Bratislava's 13th-century castle and various classical music landmarks. 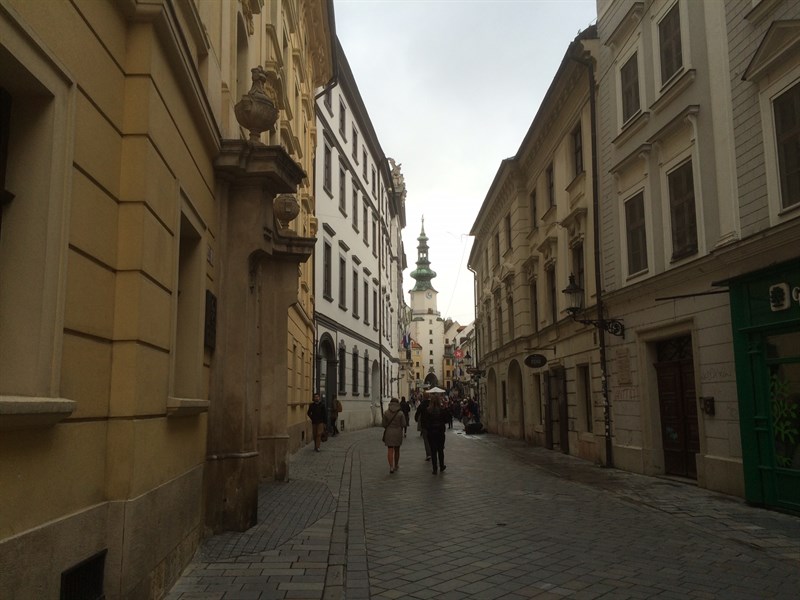 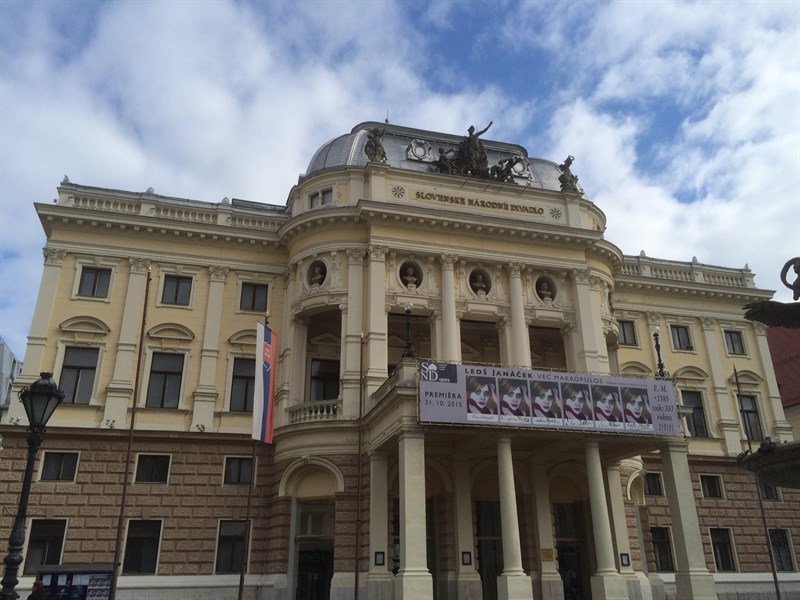 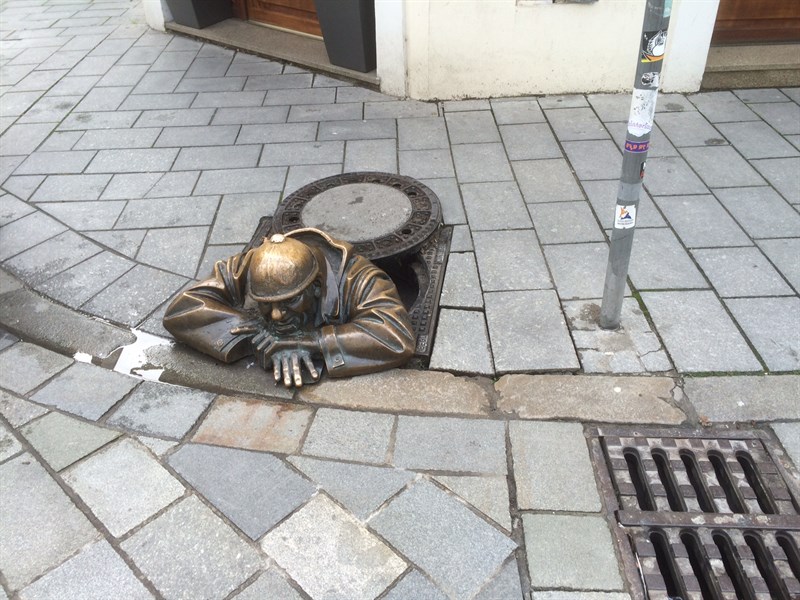 Day 5: After cruising past charming villages and the lush vineyards of eastern Austria, we arrived in Vienna. A local guide took us to Mozart's house where he composed The Marriage of Figaro. We enjoyed a private concert in the very chamber where Mozart himself performed as a young man. Tomorrow - on to Bratislava. 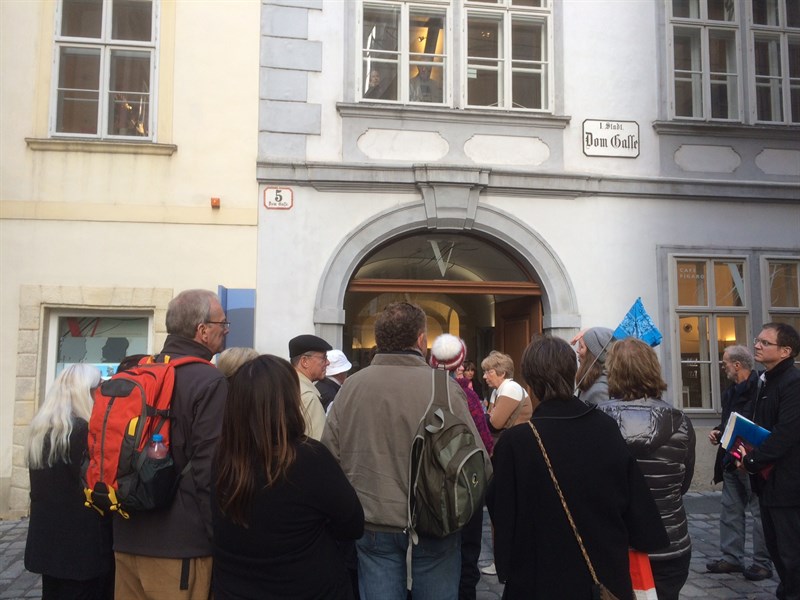 The house where Mozart composed the Marriage Of Figaro in Vienna. Steve Milne / Capital Public Radio 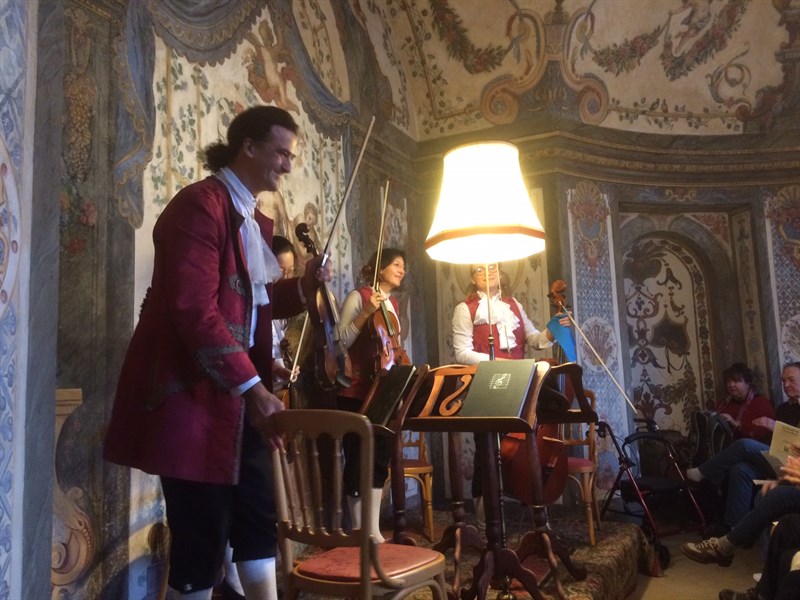 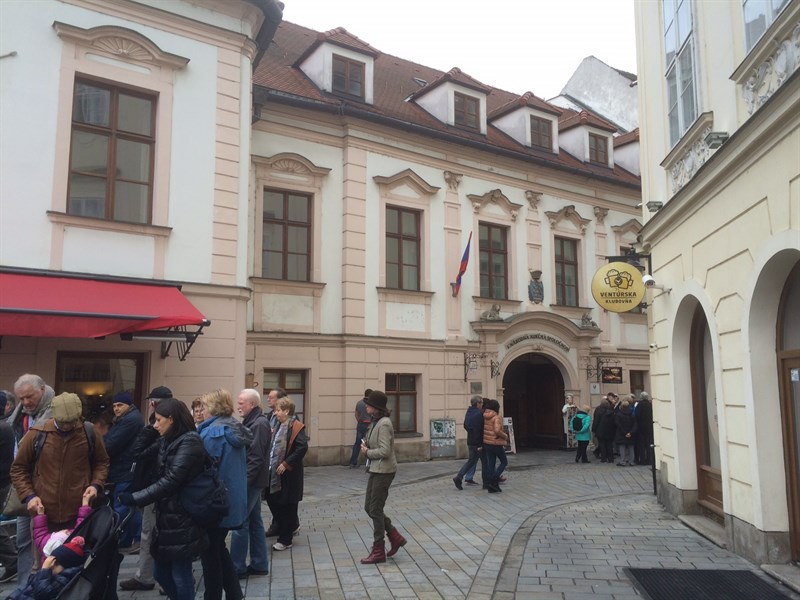 We hate to leave the beautiful city of Prague after three days of historical sites, sumptuous meals and finally mastering "dobry den" for "hi," "prosim" for "please" and "dekuji" for "thank you."

Oh, one more thing about Prague. Beer and the Czech Republic go hand-in-hand. The country boasts the highest beer consumption per capita in the world. Needless to say we (and when I say "we" I mean "I") lifted a few Pilsners Urquells. 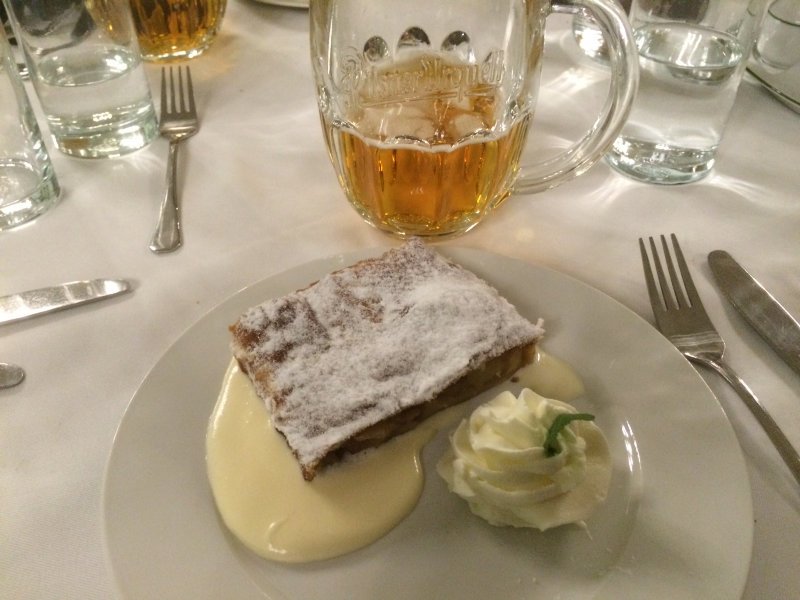 And last night's passionate performance of "The Marriage of Figaro" at the historic Estates Theatre was the perfect way to end our Prague stay. 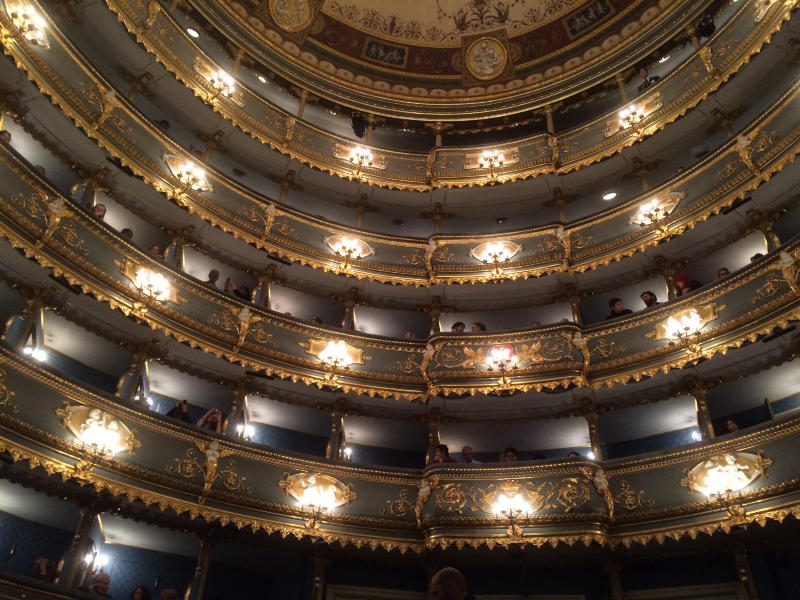 Today we departed for the city of Passau in Bavaria. We embarked on the MS Amadeus Elegant at about 4 p.m. (7 a.m. California time) for our cruise on the Danube.

Day 3 - A Castle, A Cathedral And An Opera 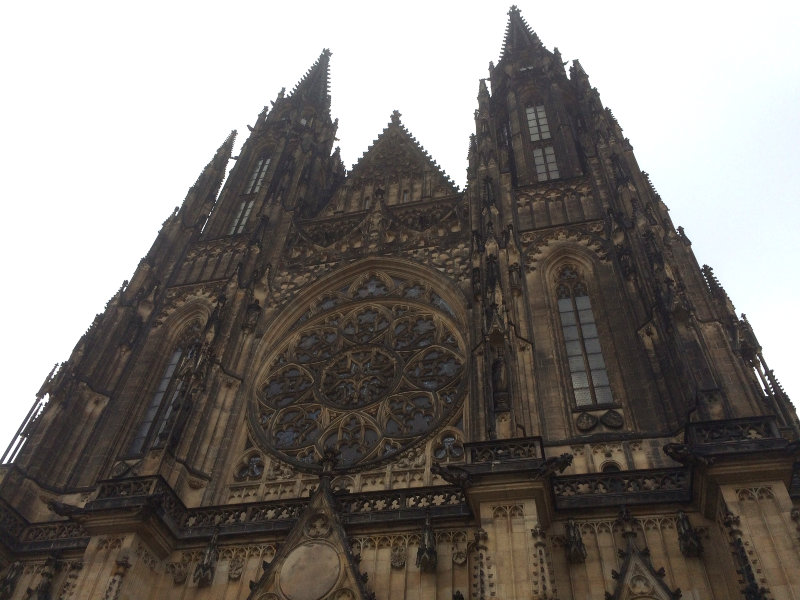 One of the highlights of the castle is St. Vitus Cathedral. While walking through the castle, we got a peek at the Bohemian Crown Jewels - reproductions of course. 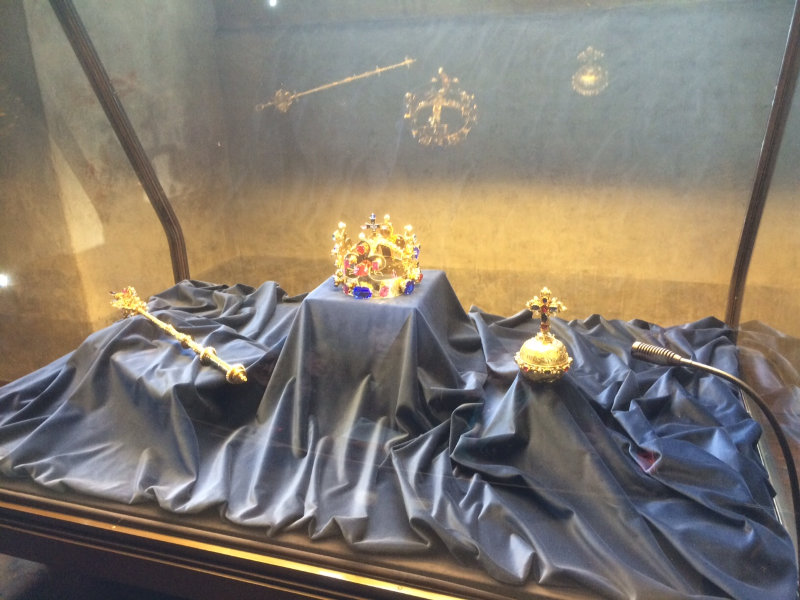 After our castle visit, we strolled across the historic Charles Bridge that crosses the Vltava river. The bridge was built in 1357 by King Charles IV and connects Prague Castle with the city's Old Town. The bridge features 30 baroque-style statues. 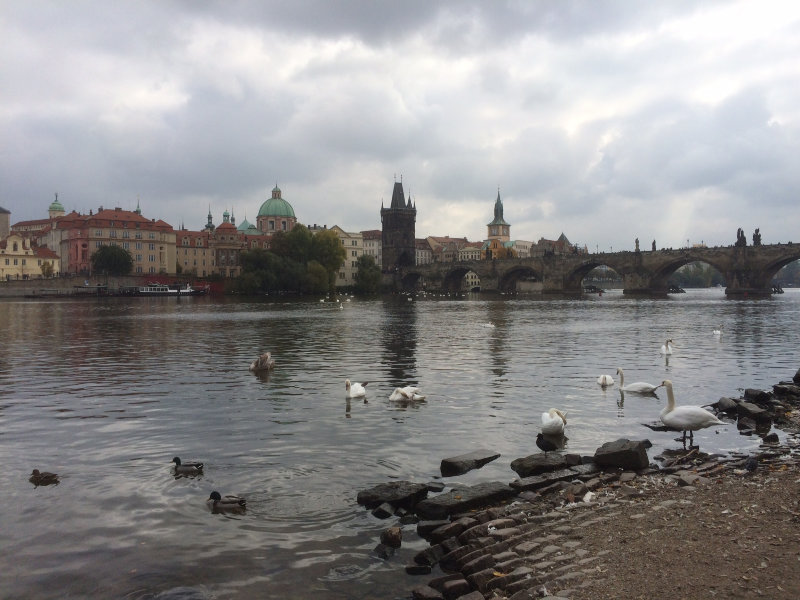 Tonight at 7 p.m. (10 a.m. California time) we attend a performance of Wolfgang Amadeus Mozart's The Marriage of Figaro, at the Estates Theatre. The venue is known for being where Mozart conducted the world premiere of his opera "Don Giovanni" more than 230 years ago.

Day 2 - Revolutionary Sites Of Prague Our day began with a walking tour of Prague. We started at Wenceslas Square, a place that has seen numerous historic protests and demonstrations over the years, including the “Velvet Revolution” in 1989, a relatively non-violent demonstration which helped lead to the end of more than 40 years of Communist rule in Czechoslovakia. 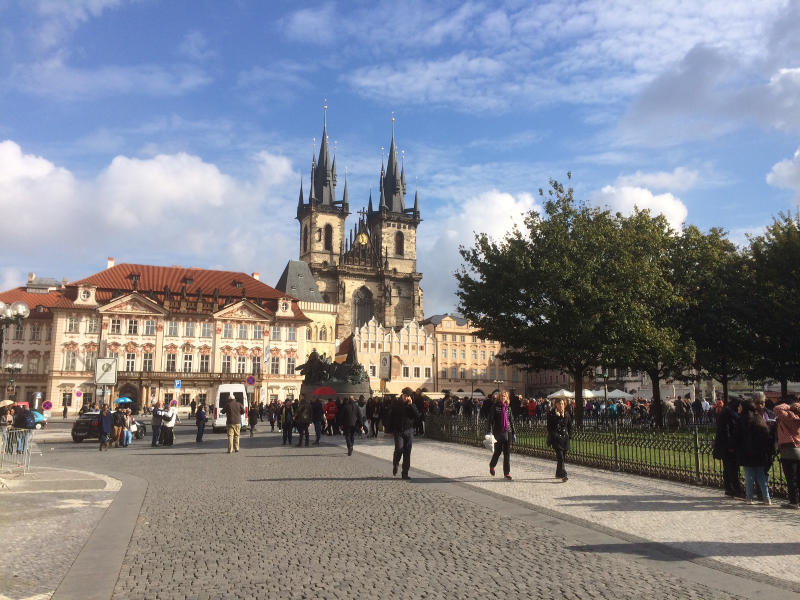 Our tour guide Jara Cernosek explained that Mikhail Gorbachev, the leader of the Soviet Union at the time, did not order riot police to interfere with the Czech protestors.

“But they didn’t do anything in 1989 because Gorbachev said that this is our own Perestroika,” explained Jara. “Gorbachev said ‘this is your business’ and so he didn’t interfere. And so we were able to go from Communism to Democracy peacefully. No military force was used. Only the very first demonstrations, police arrived with shields, clubs, their helmets and they clubbed the people. That was on November 17, 1989. But other than that it was pretty peaceful, bloodless. The demonstrations happened here in Wenceslas Square.” 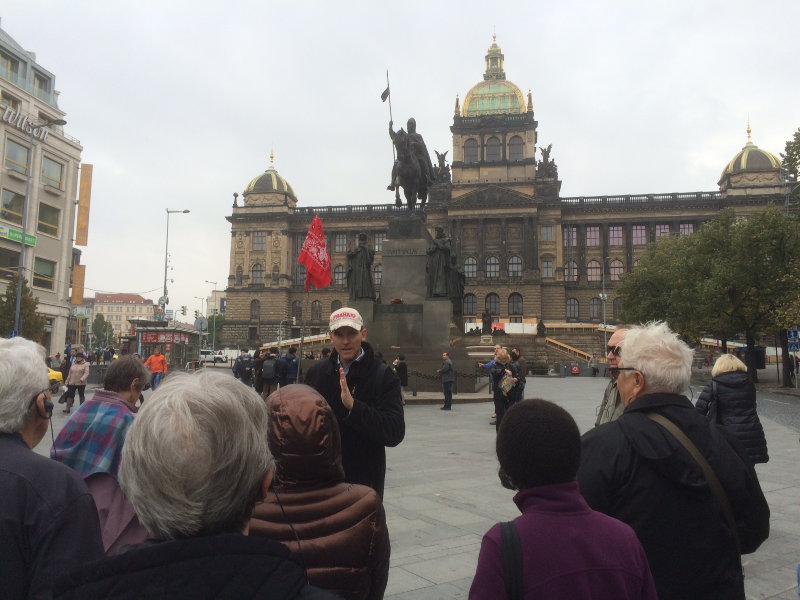 The day ended with an emotional walk through the Jewish Quarter, an area of Prague that dates from the 13th century, where Jewish people were ordered to settle. Sites included several historic synagogues and the Old Jewish Cemetery. 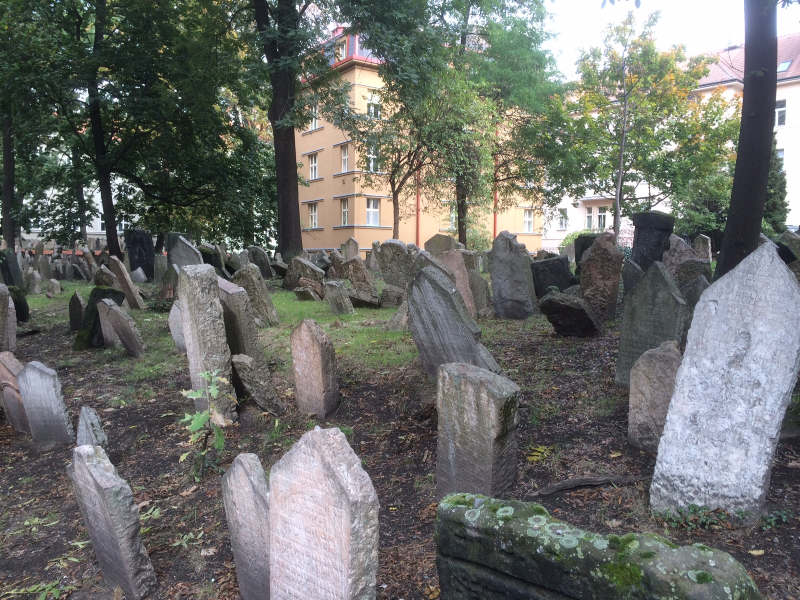 Day 1 - Dumplings And Folk Music In Prague About 60 Capital Public Radio listeners arrived in Prague, the capital city of the Czech Republic, on October 18th, as part of the latest CapRadio Travels excursion with Earthbound Expeditions.

CapRadio President and General Manager Rick Eytcheson and I are traveling with the group. Our adventure will include a cruise down the Blue Danube River, performances at grand opera houses and visits to world-class museums in Budapest, Bratislava, Vienna and Salzburg.

Most of Saturday and Sunday were spent making the 6,000 mile trip from Sacramento to Prague. The busy travel day culminated with a relaxing and sumptuous "Welcome to Prague Feast" of roast duck and dumplings, washed down with Pilsner beer, and apple strudel for dessert. As we dined we enjoyed the music of an accordionist and bassist playing and singing Czech folk songs.

On Monday's itinerary - a walking tour of Prague starting at its center, Wenceslas Square and ending in the Jewish Quarter.