Student Pianists Take The Stage In A 10-Piano Concert

Piano performance takes on the unlikely role of a team sport in the upcoming 10-Piano Concert. This unique performance, held biannually in Sacramento and Matsumoto, Japan, presents the music of ten grand pianos played in unison by Japanese and American students.

Linda Nakagawa, Director of the Sacramento 10-Piano Concert, said the performers are students of Suzuki Piano Basics, an international organization including teachers from Holland, Singapore, Japan and beyond. Students in these various countries work with the Suzuki piano teachers, learning to build the technique and listening skills taught through the program.

Nakagawa said the Suzuki Method relies heavily on a student’s ability to listen, fostering a technique known as playing by ear.

Instead of instructing students to read musical notation from the get-go, Suzuki teachers focus first on a student’s ability to learn through listening and musical imitation.

“They start with the right hand only, learning folk song melodies,” said Nakagawa.

This initial learning is done solely by ear. As they advance, students are gradually introduced to notated music and taught to use their left hand as well, to supplement their melodic playing.

Although the method is taught globally, the 10-Piano Concert itself is a performance opportunity offered exclusively to Japanese and American Suzuki students. They interact not only on a musical level, but culturally as well.

The concert’s exchange program allows students from both Japan and America to travel to Sacramento and live with host families during the weeks of concert preparation. This year, 11 Japanese students join American students for the Sacramento performance.

One of these students is 29-year-old Suzuki student Ryota Miyoshi from Tokyo, who is preparing for his seventh 10-Piano Concert.

“It is great because we can create something with a different culture of people. Piano, we can all do, because we don’t need the language," said Miyoshi.

There is an unspoken musical connection between performers, but Linda Nakagawa says it's still difficult to coordinate the ten student musicians.

“The piano is a solo instrument,” Linda Nakagawa said. “When you have ten together, we still want to have the musicality, but we cannot base it on individual interpretation.”

During their group rehearsals, spanning two weeks in August, the teachers focus on developing the students’ group cooperation, as the young musicians learn to play together.

Louis Lanik, a 14-year-old Suzuki student from Rochester, NY, offers his experience on the difficulty of group rehearsals.

Despite a little bit of unavoidable stumbling during rehearsals, Suzuki Piano Basics President and teacher Karen Hagberg offered her statement of optimism.

“It’s amazing what they can do. They get this sort of telepathy with each other,” Hagberg said. “They are having the experience of playing in an ensemble with others, something that most piano students never experience until they become advanced players.”

“Piano, it’s a really lonely instrument, but only in the 10-Piano Concert can you play together,” said Miyoshi. “That’s really a special point. We can share the music, not only with the audience, but also with each other.”

Not only is the performance a new experience for the students, it provides an opportunity to experience the music of Bach, Mozart, and Beethoven in a new light. By attending the performance, Hagberg said audience members get to hear ten times the sound and sense the “hearts and souls of ten players as they express the music together.” 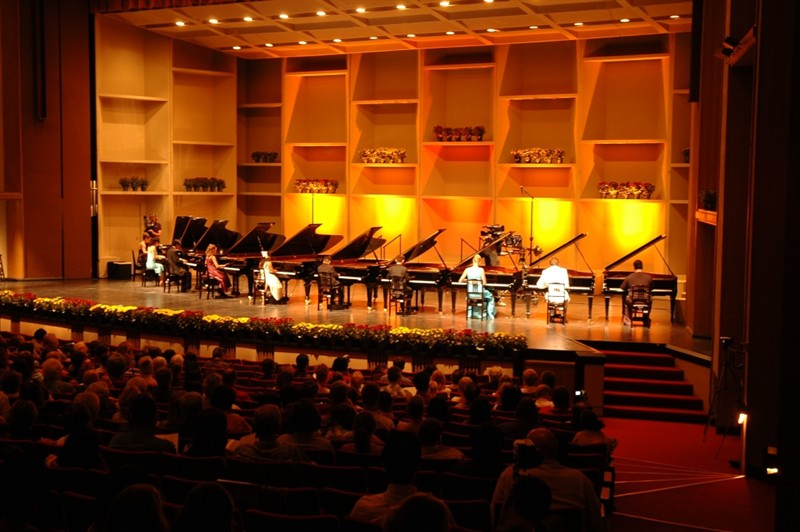 The Suzuki 10-Piano concert takes place on Saturday, August 16 at 2:30 p.m., on the stage of the Sacramento Community Center Theater. Tickets are $20. Witness the Suzuki piano students for an afternoon of team piano playing.