A pickup is pinned under a fallen tree on Second Ave. in Sacramento, Calif., on New Year's Day morning, 2023.

As 2023 began, people throughout the Sacramento region awoke to survey the damage from a powerful New Year's Eve storm that brought flooding, closed highways, downed trees and power outages to hundreds of thousands of residents.

At least one person has died in the flood waters that shut down Highway 99 south of Elk Grove, which reopened Sunday night.

One dead in flood waters

One person was found dead in a submerged vehicle in south Sacramento Sunday morning after two levees were breached along the Cosumnes River.

The Cosumnes Community Services District Fire Department began looking for a missing person Sunday morning and found a car completely submerged along Dillard Road near Highway 99. Rescue personnel reached the vehicle and confirmed the driver had died, and later confirmed it was the missing person.

"Our understanding is the vehicle was washed off the roadway sometime in the night, and it appears the person never exited the vehicle," said Cosumnes Deputy Fire Chief Dan Quiggle.

The threat of flash floods and levee breaches remains. Highway 99 was been shut down at Dillard Road between Elk Grove and Galt due to the flooding on the Cosumnes River, but reopened late Sunday night.

Highway 99 is back open in both directions, south at Grant Line and north at Twin Cities Road just south of @CityofElkGrove. Thanks to our crews and @CHPSouthSac for their efforts working on the holiday weekend to keep motorists safe. @CaltransHQ https://t.co/b7pS9QI3bq

The California Highway Patrol reported a number of cars were submerged in the water and is advised drivers Sunday drivers to stay away from “the surrounding areas of Wilton, Herald and outlying region of Galt."

Highway 99 remains CLOSED between ⁦@CityofGalt⁩ and Grant Line Road just south of ⁦@CityofElkGrove⁩ due to flooding of the Cosumnes River. The roadway won’t reopen until the water recedes, which is expected sometime tomorrow afternoon. ⁦@CaltransHQ⁩ ⁦ pic.twitter.com/TjFo670tul

Sacramento County declared a state of emergency on Saturday evening, and on Sunday morning extended a flash flood warning along the Cosumnes River at Cosumnes Road and Wilton Road to Highway 99 between Twin Cities Road and Dillard Road following a levee breach.

The county advised some residents in the area of Wilton near Cosumnes Road and Wilton Road to seek higher ground just after 9:30 pm. Saturday due to an imminent levee failure in that area on the Cosumnes River after the NWS issued a flash flood warning in the area. 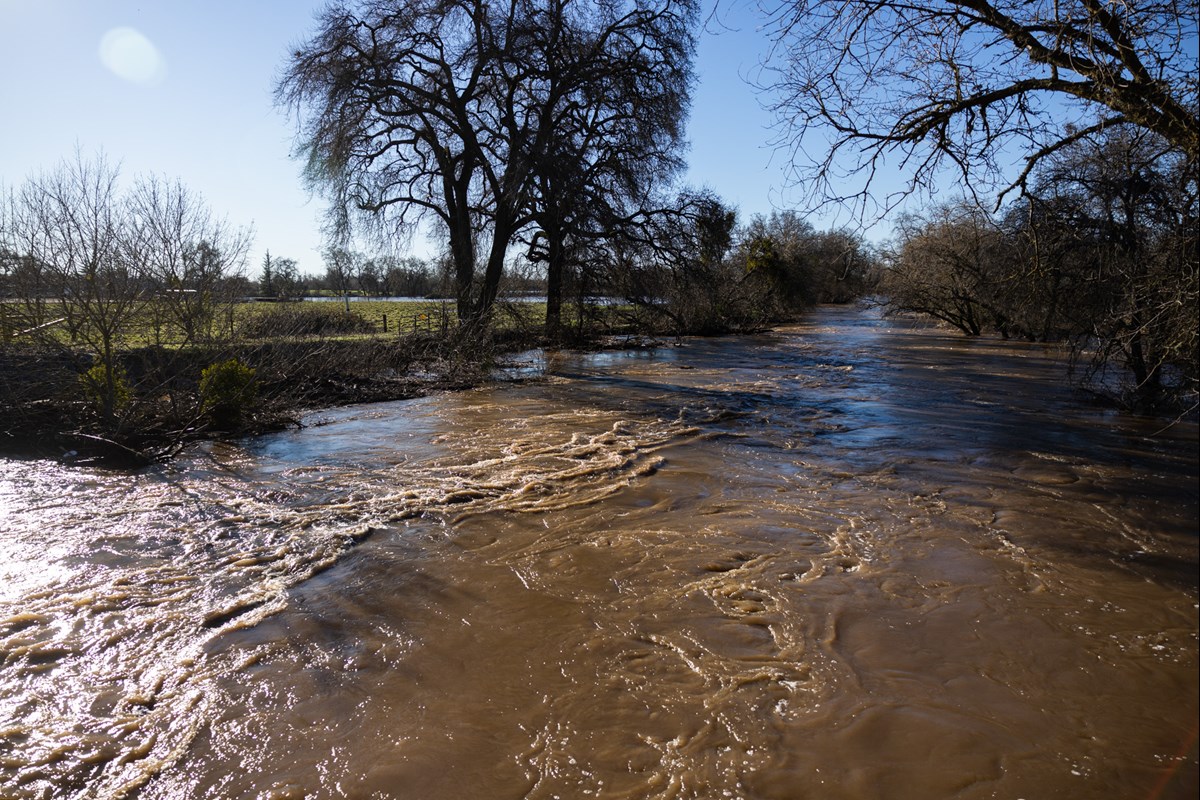 A rain-swollen creek crosses under a bridge on Wilton Road on New Year's Day morning in Sacramento County.Andrew Nixon / CapRadio

The Sacramento County Office of Emergency Services has issued an evacuation warning to residents living in the areas of Point Pleasant, Glanville Tract, and Franklin Pond to prepare to leave the area now before roadways are cut off to evacuate the area. pic.twitter.com/5kVy7UeGmz

The center, located at 2450 Meadowview Road, will have water, snacks, restrooms and a place for people to rest and charge their phones. Pets are also welcome.

Mary Spencer-Gode stood on her porch New Year’s Day morning, looking out onto her Land Park street, where a gigantic elm tree had fallen the night before.

It is a city of downed trees in Sacramento right now, after nearly 60 mile an hour winds pummeled residents on New Year’s Eve.

Here is a massive Dutch elm that fell in Land Park — and broke a gas line — last night at around 8:15 PM.

No one was hurt. pic.twitter.com/Gwhz8nKFs0

“The wind was just going crazy,” she recalled of New Year’s Eve evening around 7 p.m. “We turned our TV off so we could hear it, and I was sitting in the kitchen, I heard a big ‘woosh’ and kind of the house moved.”

Out front, the towering elm tree — the last one standing on the block — ripped from the ground, taking with it a neighbor’s driveway before crashing into the street and brushing up against another home.

“We could smell gas,” she said. “It was really strong.”

A PG&E crew spent their New Year’s Eve midnight working on Fourth Avenue, and the next morning curious neighbors snapped pictures and chatted in front of the giant elm.

It was a scene familiar across the region, after more than 60 mph winds wreaked havoc and shut down power for tens of thousands of Sacramento residents, many of whom spent their New Year’s Eves by candlelight.

Inez Piña lives in Oak Park. Sunday morning her neighborhood was still without power and her home was blocked in by a tree that fell Saturday evening.

Piña said she may need to use a ride-hailing service to get to work now, as most of her neighbors are also blocked in. Despite her troubles, she said it was good for a region still mired in drought to see so much rain.

"We need the rain, but just crazy what happened," she said. "Never experienced this before. It's 20 years that I've been here. So it was pretty interesting."

The unexpected extreme weather did not put the brakes on the annual New Year’s Day lowrider cruise, which starts in Land Park, but the closure of Highway 99 did make it harder for some people to make it. Paul Sampe traveled from Fairfield but said turnout at the event was less than in previous years, and organizers had to move its location due to the dozens of downed trees on the west end of the city’s largest park.

“They moved it from the other side to over here,” Sampe said. “I’ve been coming here every year; this is small compared to the other years. Usually there’d be 300 cars here. I think it’s because of the weather, and other people thinking it wouldn’t go down.” 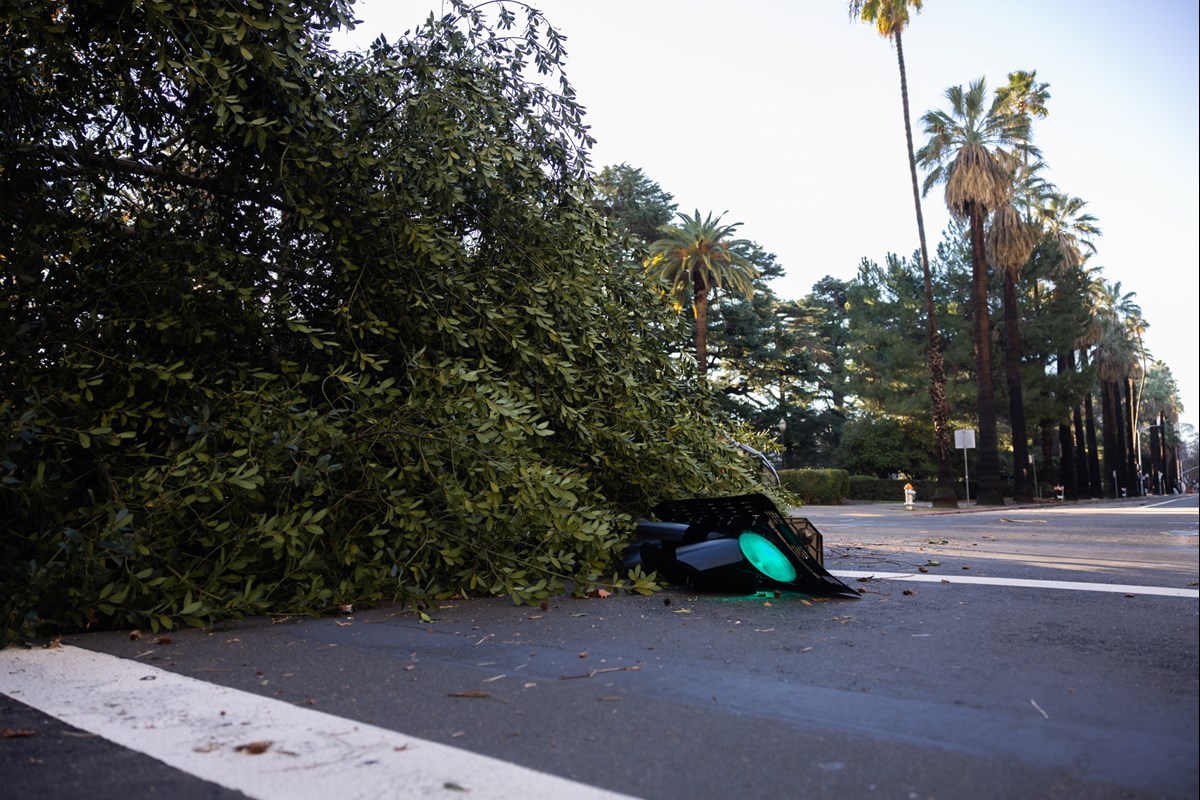 A traffic light taken under a fallen tree on the corner of 10th Street and L Street in Sacramento, Calif. on New Year's Day Morning, 2023.Andrew Nixon / CapRadio

Hannah Chandler-Cooley, a meteorologist with the National Weather Service in Sacramento, said that while the amount of rain was near what was forecast, the flooding impacts were beyond what was expected.

"There was a significant amount of rain that fell in the foothills and in the mountains," Chandler-Cooley said. "Between yesterday and the day before, anywhere from 6-8 inches fell over those foothill and mountain locations, and that caused significant runoff into the rivers."

According to the Associated Press, dozens of drivers were rescued along Interstate 80 near Lake Tahoe after cars spun out in the snow. Both I-80 and Highway 50 were open Sunday morning according to Caltrans, with chain controls in effect.

While Sunday is expected to be clear with sunny skies and breezy winds gusting around 25 mph, another set of storm systems are forecast to arrive starting Monday.

The weather service expects Sacramento to get up to an inch of rain Monday and Tuesday with the heaviest precipitation Monday night. Snow levels in the Sierra could get down to 2,000 feet, with 6-8 inches of snow forecast at Donner Pass, and 4-6 inches at Echo Pass.

Heavy rain could return Wednesday through Friday, with the strongest storm coming in Wednesday night. Sacramento, Chico and Stockton could all see another 2-3 inches of rain, with a return of flooding risks, including ponding on roads and mug and rock slides. Strong winds will also return, with gusts up to 45 mph possible in Sacramento and Stockton.

"There will definitely be rises along the rivers but the specific flooding impacts, we're not expecting widespread river flooding impacts at this time," Chandler-Cooley said. "That situation, especially along the Cosumnes River, is evolving hour-by-hour at this point." 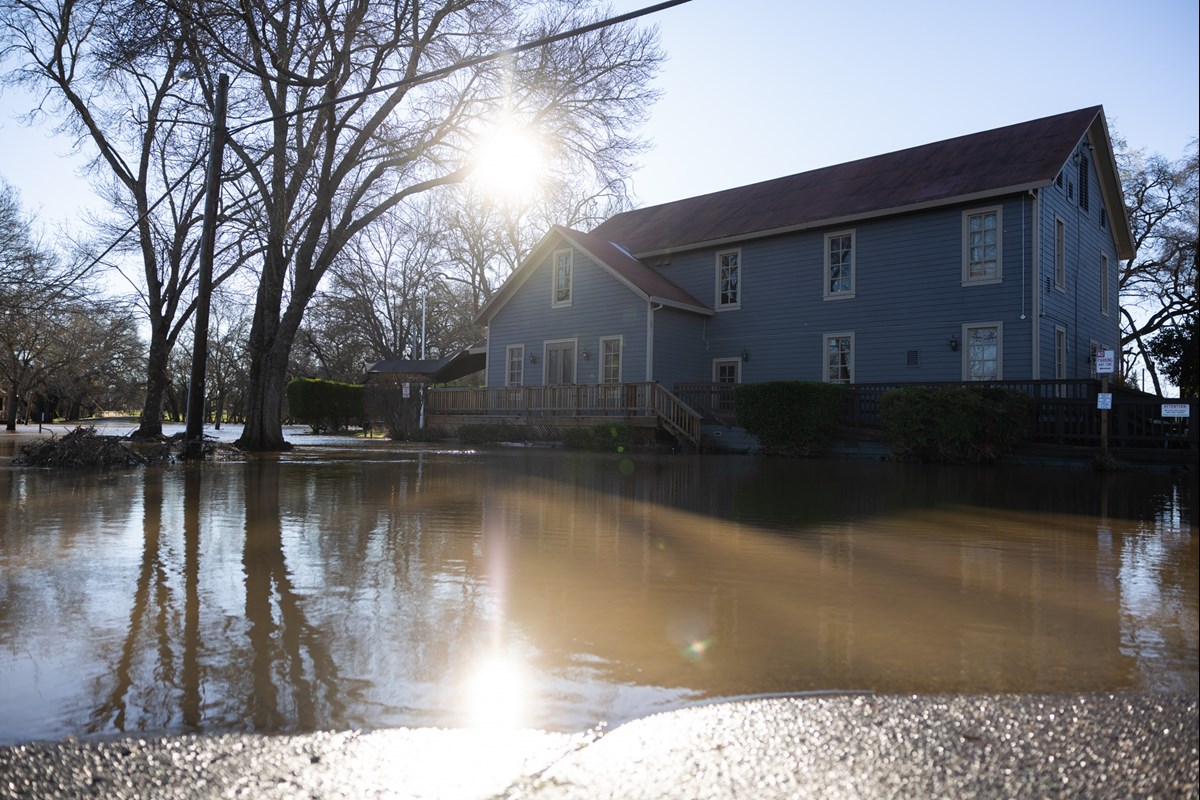 In the Sierra Nevada mountains, many areas could see 2-3 feet of snow between Wednesday and Friday, with up to 5 feet possible at Lassen Park. Mountain travel could be dangerous, with low visibility as high winds blow snow across roadways and chain controls expected in many places.

"With the bigger storm on Wednesday, that will bring more travel impacts, with multiple feet of snow over the mountain passes," Chandler-Cooley said.

She said residents should take the next few days to prepare, especially for Wednesday's storm.

“Try to take this time between now and Wednesday to be prepared for any flooding. Learn what to do if a flood might happen near you," she said. "And never drive through flooded roadways — ever. In the mountains, we're really discouraging travel in the mountains, especially Wednesday and Thursday,” she said.