Fentanyl continues to take students’ lives in Sacramento. Here’s how parents and schools are responding.

Laura Didier prepares to speak at an assembly about fentanyl to students at El Camino Fundamental High School in Sacramento County, Thursday, Dec. 1, 2022.

In the Sacramento neighborhood of Land Park, Jennifer tells the story of her 16-year-old son’s Fentanyl use, drug addiction and current rehabilitation.

“Where to begin,” she says, overwhelmed, stumbling over a few sentences.

Over in the suburb of Rocklin, Laura Didier starts her story at the end of her 17-year-old son’s life.

“The last day that I saw my son alive was Christmas of 2020,” she says, her voice quivering, “and Christmas will never be the same.” 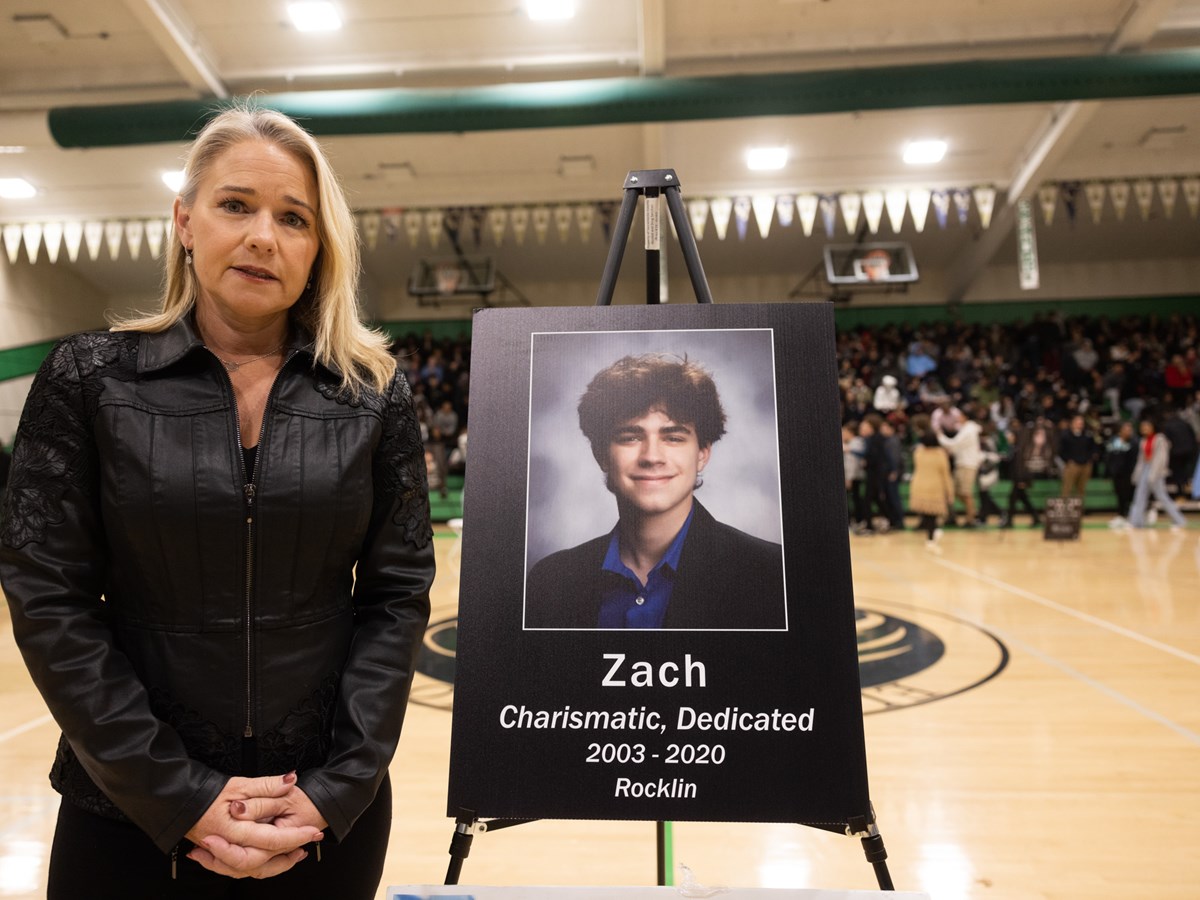 Laura Didier poses with a photo of her son at an assembly about the dangers of fentanyl to students at El Camino Fundamental High School in Sacramento County, Thursday, Dec. 1, 2022.Andrew Nixon / CapRadio

Unbeknownst to both mothers, their sons ventured out to buy Percocet from social media dealers in the greater Sacramento area. But instead they got Fentanyl, a highly addictive and dangerous opioid.

What these families face is no longer an atypical experience in Sacramento, as opioid begins to take a grip on the region. Young adults cope with depression, loneliness, and COVID fatigue by turning to dealers on social media. And though what they seek are pills like Percocet or Xanax, they are given Fentanyl, an opioid that feeds depression and addiction.

These “Fentapills” are easy to produce and disguise, and remain unregulated with more than half of the distributed street pills containing a lethal dose.

Across the schools in the area, leaders and parents are urgently looking for solutions, prioritizing education and access to the life-saving medication Narcan, which is also referred to as Naloxone.

This Fentanyl crisis prompted the Sacramento City Unified School District to vote in October to become one of the first in the state to distribute Narcan, which can help treat suspected Fentanyl overdose. The decision by the board was a response to increasing opioid deaths in Sacramento County and the introduction of “rainbow Fentanyl” in California.

Other districts have followed suit after the county partnered with Fentanyl prevention nonprofit Arrive Alive California. Local organizations also are focusing efforts on Sacramento’s youth, who are caught in the middle of COVID-related mental health crisis and an opioid epidemic.

Sacramento County has seen a 133% increase in the number of Fentanyl-related cases between 2021 and 2022, according to Jonathan Charron, a criminalist at the Sacramento District Attorney’s crime lab who spoke at Arrive Alive discussion in November. He found the increase in cases directly corresponded to the amount of Fentanyl pushed in the region.

Bob Beris, special agent at the San Francisco division of the Drug Enforcement Administration, says Fentanyl, which is often produced in China and pedaled to the cartels in Mexico, comes to Sacramento in high volumes, as a distribution point for the rest of the country.

Jennifer was taken aback when Fentanyl affected her family. (We’re not using her full name to protect her son’s medical privacy.) He was a good student, both parents were attentive, and drugs were never around in the house.

“I didn't think it was going to touch my family,” Jennifer said.

‘He ended up getting hooked’

In 2022, Jennifer noticed her son’s odd behavior. His heavy eyes didn’t match the effects of marijuana, and he seemed to be in a downward spiral.

“He started substance use probably in the seventh grade, but we weren't aware of it back then,” Jennifer said. “And then the pandemic hit and we were noticing mental health issues, depression, anxiety.”

During the pandemic, a mental health epidemic joined the issues affecting youth. A 2022 UC Davis study found that mental health crises were a common reaction to opioid withdrawal.

Jennifer sought counseling for her son, who was put on antidepressants, which proved to be ineffective because he was dishonest about his drug use.

This summer, Jennifer caught her son inhaling Percocet with a straw in the garage. When she sent the drug to the lab to be tested, she found that it was pure Fentanyl.

“From a mental health standpoint, knowing that teenagers are moody — and being a teenager is really hard — I thought, ‘He'll get through it,’” Jennifer said about the escalation of her son’s addiction prompted by the pandemic. “But the further down he went, he ended up getting hooked.”

Fentanyl capitalizes on the insecurities of young people, according to Bob Hicks, a program coordinator at the Rocklin-based youth recovery program The Pathway Program.

“Teenagers are already susceptible,” Hicks said. “They don't have the ability to see into the future and they love thrill seeking behavior, which is also what describes alcoholics and addicts.”

Beris with the DEA warns parents and their children of the new drug landscape where 99% of street pills (Percocet, Xanax, Adderall) are solely Fentanyl. And 60% of those have a lethal dose of that drug.

“It's really a game of Russian roulette that we have with Fentanyl pills that are being distributed in our communities,” Beris said. “And I want to make sure folks know it takes only two milligrams of Fentanyl in a pill to be a lethal dose – a couple of grains of salt.”

Jennifer’s son’s life was spared, and she pressed to send him to rehab for recovery.

“But it was just the beginning,” she said. “Full-on substance abuse addiction is a long journey.”

‘They will be quite literally delivered to their homes’

Between 2018 to 2021, access to Fentanyl developed into a national trend and there was a 141% percent increase in Fentanyl-related youth deaths. These numbers continue to climb.

Laura Didier’s son Zach Didier was a senior at Whitney High School in Rocklin in December 2020. He had just completed his UC application and was excited about the future.

That year, two days after Christmas, her ex-spouse Chris Didier found Zach in his room, napping at his desk, his hand on the mouse, ready to click. But his body was cold, and he was unresponsive.

“The time from [Zach’s] first contact with a dealer [on Snapchat] to Zach's death was 48 hours,” Laura Didier said. “It only took one pill.”

He had no history of drug use and his untimely death came as a shock.

“From what we've pieced together, I think there was some COVID boredom and COVID fatigue,” Laura Didier said about her son’s interest in acquiring Percocet.

Beris emphasized the accessibility of Fentanyl and its ability to be in any home.

“Back in the day, you'd have to go down to the street corner,” he said. “But a cell phone is a superhighway. They get on these social media sites, they can order these drugs and they will be quite literally delivered to their homes.”

Counterfeit pills have distinct markings, like M-30, which can help identify that they are Fentanyl pills.

Beris and Didier spoke to the indiscriminate nature of “Fentapills.” They can impact any family, Didier said. But a disaggregated breakdown of Fentanyl overdoses by age and race were not provided by the Sacramento County Public Health Department.

“Three months after we buried [Zach], we received all of his acceptance letters,” Laura Didier said. “And he got into UCLA, his top choice. But instead of visiting him at UCLA, I have to visit him at the cemetery.”

‘So many people were being affected by it’

In the aftermath of her son’s passing, Laura Didier felt an urgent need to get the word out about Fentanyl. However, COVID restrictions made it difficult at first.

Around this same time, Emergency Medical Services at the Cosumnes Fire Department in Elk Grove had been tracking irreversible Fentanyl cases in the area prior to the pandemic. It found the numbers of cases rising.

“So many people were being affected by it. Some very close. And one of our firefighters had a family member [who] passed away [from Fentanyl overdose],” Rider said. “So it started to touch the lives of not only our community as a whole, but also people in our department.”

Sacramento County is catching up with these efforts, as well.

For this school year, the county is contracting with Sacramento-based Arrive Alive California to implement free Fentanyl education and prevention programs. Arrive Alive’s seminars have been held in 109 schools in the greater Sacramento area. Arrive Alive also collaborates with Song For Charlie, a California-based nonprofit focusing on Fentanyl awareness among youth, and for which Laura Didier is outreach coordinator.

At assemblies with parents, students, teachers and school administrators, Didier shares her son’s story, the disconcerting data when it comes to youth Fentanyl deaths and the significance of having Narcan available.

“I think I've spoken in front of about 30,000 students since the beginning of the school year,” Didier said. “Being able to be face-to-face with the kids and seeing their reaction — they really listen. They come give us hugs afterward, thank us for what we're doing. And it helps me feel like Zach is still there with me by my side as I share his story.”

‘It is potentially life-saving’

Angela Webb, who is the CEO of Arrive Alive California, is a proponent of Narcan in schools and in the hands of as many people as possible. Narcan is an over-the-counter, FDA-approved nasal spray medication that can treat opioid overdose.

The debate around access to Narcan became heated in August of this year after Pleasant Grove High School parents expressed concerns when their children came home with it after an Arrive Alive presentation.

Webb says many parents don’t understand why Narcan is something people need. “If someone isn’t having an opioid crisis or overdose and the nasal spray is administered, it will not hurt them at all. It does not hurt children or pets. However, if someone is experiencing an overdose, it is potentially life saving.”

Sacramento City, San Juan, Elk Grove, Folsom Cordova and other districts now have some form of Narcan at schools. Some have it in health offices and others have it distributed to safety officers and teachers.

According to studies, Narcan can reverse Fentanyl overdoses around 93% of the time. At the Sacramento City and Elk Grove school districts, Narcan has already been used twice since it was made available two months ago.

But ultimately, youth Fentanyl deaths have already left their indelible mark on the Sacramento community.

Jennifer says she’s questioning her parenting. “Kids are so used to being able to have that instant gratification and make the bad feelings or the uncomfortable feelings go away,” she said. “But they don't have actual life skills. And that is something that became very apparent, where I was like, ‘Oh my God, I failed to give my kid coping skills.’”

Didier feels similarly, and she hopes advocacy can be a tool to enable her to move forward.

UPDATE: On Dec. 5, 2022, Assembly members Joe Paterson (R-Rocklin) and Juan Alanis (R-Modesto) introduced AB 19 to the Assembly floor. The measure would require two-doses of Narcan to be available in schools throughout California and authorize the medication to anyone suffering from an overdose on site.