Erendira Daniel has lived in her Gardenland home for the last 56 years. It’s the house where she raised her nine kids, and she estimates it was last renovated in 1983.

In the next year, Erendira Daniel will see her home transformed. She’s getting electric air conditioning and a water heater to start. She’ll also be getting an outlet set up in the backyard for charging an electric car — something she doesn’t have nor need, since she doesn’t drive anymore.

“There’s a lot of benefits, and for climate change as well,” she said in Spanish. “Because in the air, in the atmosphere, we’re breathing in things that aren’t good for us. And the electricity helps us not use other products … and it improves the air.”

Daniel, 86, lives in Gardenland, one of the oldest neighborhoods in Sacramento. She’s lived there for the last 56 years. It’s the place where she raised her nine kids, and where she now lives alone. She hasn’t been able to afford big updates to her home, which she said was last renovated around 1983.

These changes, however, are free. This year, SMUD, the Sacramento Municipal Utility District, launched a pilot program aimed at transitioning older, gas-reliant homes to greener, energy-efficient appliances. It’s specifically targeting people who can’t afford these changes on their own, and who might benefit from more efficient appliances that could lower their energy bills.

These efforts come at a time when Californians are thinking about where their energy comes from. For years, state officials have encouraged residents to transition all parts of their lives — from cars to stoves to power sources — to renewables. The state has made strides towards that goal with recent directives, like one mandating that by 2035, only electric cars will be sold in California. SMUD has set its own goal as well, aiming to be “carbon zero” by 2030.

Erik Krause, SMUD’s director of customer service delivery, said the utility district has made efforts to electrify low-income homes since 2018, but this is the first time they’ve targeted a specific neighborhood. Progress towards getting people on board has been slow in Gardenland, but he said that it’s slow for a reason.

“What we learned was it does take time to build those relationships,” Krause said. “We identified the potential for 100 homes or more in a neighborhood, but it's taken us a while to bring those forward.”

Marbella Sala, president of the Gardenland Northgate Neighborhood Association, was an early advisor for the program. Organizations like SMUD shouldn’t enter the neighborhood thinking they already have the solution, she said. The program’s creation required SMUD to rethink their initial approach and factor in the community’s experiences.

For newcomers to the conversation — especially those where finances are an issue — environmental arguments for switching to greener energy sources may not be convincing enough on their own.

“In a lot of cases, these things are more expensive,” said Alan Jenn, a researcher with UC Davis’s Institute of Transportation Studies. “So you're asking me to spend more money to, I guess, quote unquote, support the cause.”

To make this transition successful, Jenn says that these technologies need to be appealing enough for communities to buy into them. That means making technology that’s affordable, and that works as well as — if not better than — the gas-reliant utilities they’re replacing.

“They have to believe that it's not only worth it in terms of making the environment cleaner, but also that it's sort of just better for them,” he said.

Both the state and federal governments have sought that buy-in by offering incentives for people looking to purchase electric vehicles. That’s part of the appeal of SMUD’s program too, since it’s free to eligible residents. Jenn said these efforts help boost widespread adoption. Eventually, once the technology becomes both ubiquitous and affordable, these incentive programs can begin to be phased out.

For Daniel Pruna, another participant in the SMUD program, these greener swaps were always about saving money. He and his spouse first began transitioning their home to electric years ago. They installed some solar panels after seeing their skyrocketing electricity bills.

“Definitely got to save money any way you can these days,” Pruna said. “Everything goes up and you got to cut corners somewhere.”

The solar panels helped reduce those costs, so the couple planned to do more. But a few months ago, Pruna’s spouse passed away. He said that since then, it’s been more difficult for him to afford these changes.

But Pruna said he realized that, with his sole income, he qualified for the SMUD program. After he made contact, a SMUD energy specialist arrived to inspect the home. They walked through it together and as they did, the specialist pointed out different utilities that could be swapped out.

In the end, Pruna had a whole list of things for SMUD to replace, including the fridge, ceiling fans and his broken window screens, while adding in an electric water heater, an outlet to charge a car and more. These swaps will be completed in the coming weeks.

“I'm just dumbfounded because of all the blessings that have been thrown in my direction with this program,” he said.

“I feel like I'm going to be able to afford to retire here comfortably,” Pruna said.  “I don't have to have the fear or the worry of having to rent out a room in order to make ends meet.” 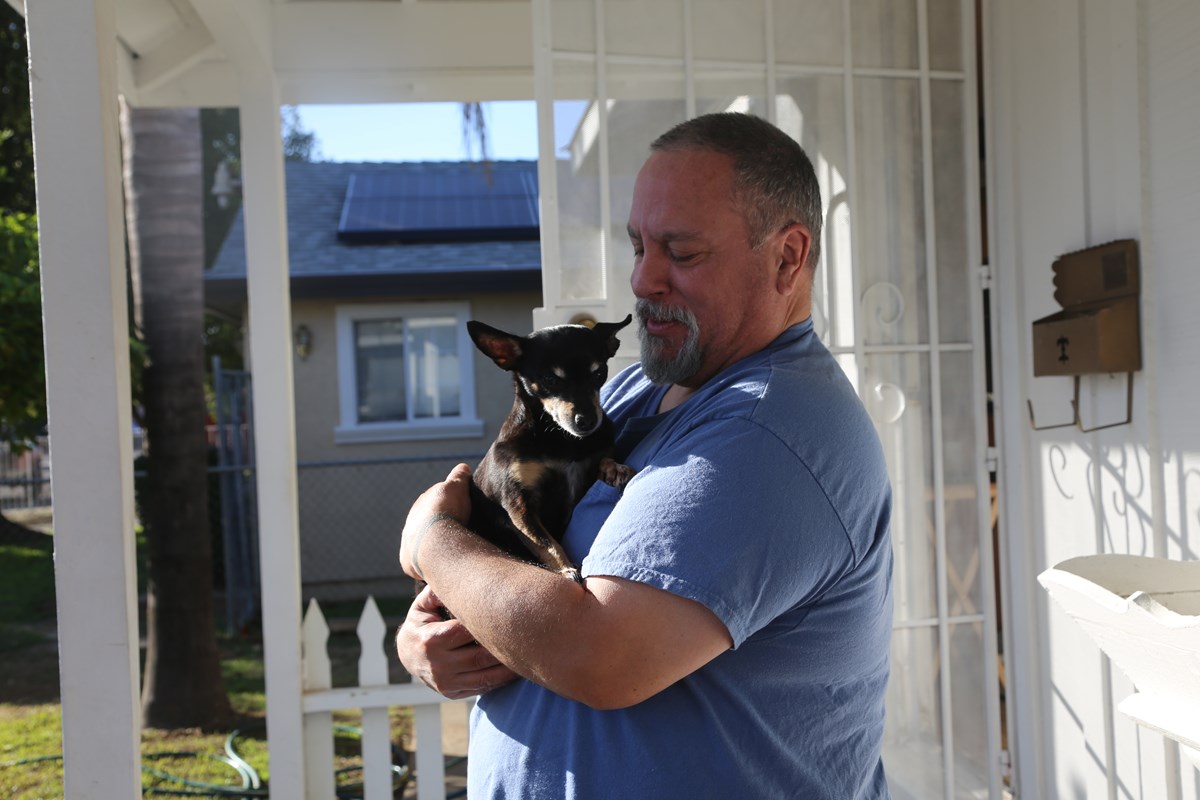 For Daniel Pruna, who has lived in the area since 1992, transitioning toward renewable energy sources was a financial decision. He said that adding solar panels to his home, for example, have helped lower his electricity bill.Manola Secaira / CapRadio

For some families, this transition is more than a conversation about money. Julie Rhoten, executive director of the Stanford Settlement Neighborhood Center, said it requires a cultural shift in the way organizations approach communities like Gardenland.

“So many times for under-resourced neighborhoods, people from the outside come in and want to fix things,” she said.

But Rhoten said that this approach doesn’t work if a group enters a community with their plans already made, excluding community voices in the process. The Stanford Settlement, which is located in Gardenland, has made a point of starting projects alongside the community.

“First step is you have to get to know that community and you have to understand just a little bit of their history,” Rhoten said. “You really need to start where people are at and not talk down, but join with.”

Rhoten says the Gardenland neighborhood formed about a century ago. Many of the families that have stayed haven’t always had the means to update their homes. As codes change over time, that has resulted in some households with components that are no longer up to code. The idea that a SMUD technician could come in, report them and jeopardize their housing is a real fear for some residents.

Both Rhoten and Sala with the Gardenland Northgate Neighborhood Association brought this concern to SMUD early in their project planning. During conversations earlier this year, they told officials at the utility district that residents wouldn’t participate in the program if they believed that doing so would lead to unintended consequences.

“They didn’t even have that on their radar,” Sala said. “They had to think it through, how to do that without penalizing them or hurting them in any way.”

After more discussion, SMUD came up with an agreement.

“No matter what they see or what they come across, they will not report it to the city,” Sala said.

According to SMUD, they are not entering homes to report code violations, but they also can’t do work if something in a house, related to what they’re working on, is not up to code. If the utility district’s employees come across something in a house that’s not up to code, SMUD’s Krause said their plan is to help make necessary changes however possible. He said it’s important that the house is safe to live in, but also that SMUD doesn’t create bigger problems for residents.

“Ideally, if we notice there's a potential problem, we fix it,” he said. “We don't necessarily have the skills or the tools or the funds to do all that work, but we do have access to partners that can help us.”

Krause added that other measures to make the program accessible, like offering assistance in different languages, has helped make residents more comfortable. And in the end, they decide what changes they’re willing to make.

Daniel, for example, said she was willing to swap out most of her appliances, but wants to keep her gas stove.

“It’s easier for me,” she said. “But everything else in the house will be electric.”

As residents have seen SMUD keep its promise, Sala said there’s been more trust in the program.

“What we're seeing that's building the trust is having the experiences of other neighbors validating that, in fact, it's true what this project is, and there's been no harm being done to them,” she said.

Daniel said she has a lot of faith in the program. She sees it as something that goes beyond her own life. After all, she’s not planning to use that electric car charger. But she said transitioning homes to greener appliances is one step forward “for the environment, for climate change, and for future generations.”

The installations in her home will likely happen within the next few months. In the meantime, she’s learned a lot about the program and the reasons for it. That’s thanks, in part, to the Spanish-speaking energy specialist, Jose Medina, who assessed her home.

“An attentive person who can explain it to me like Jose, and understand in Spanish, is excellent for me,” she said. “In the past, there have been… people [with SMUD] who’ve talked to me in English, but not in Spanish.” 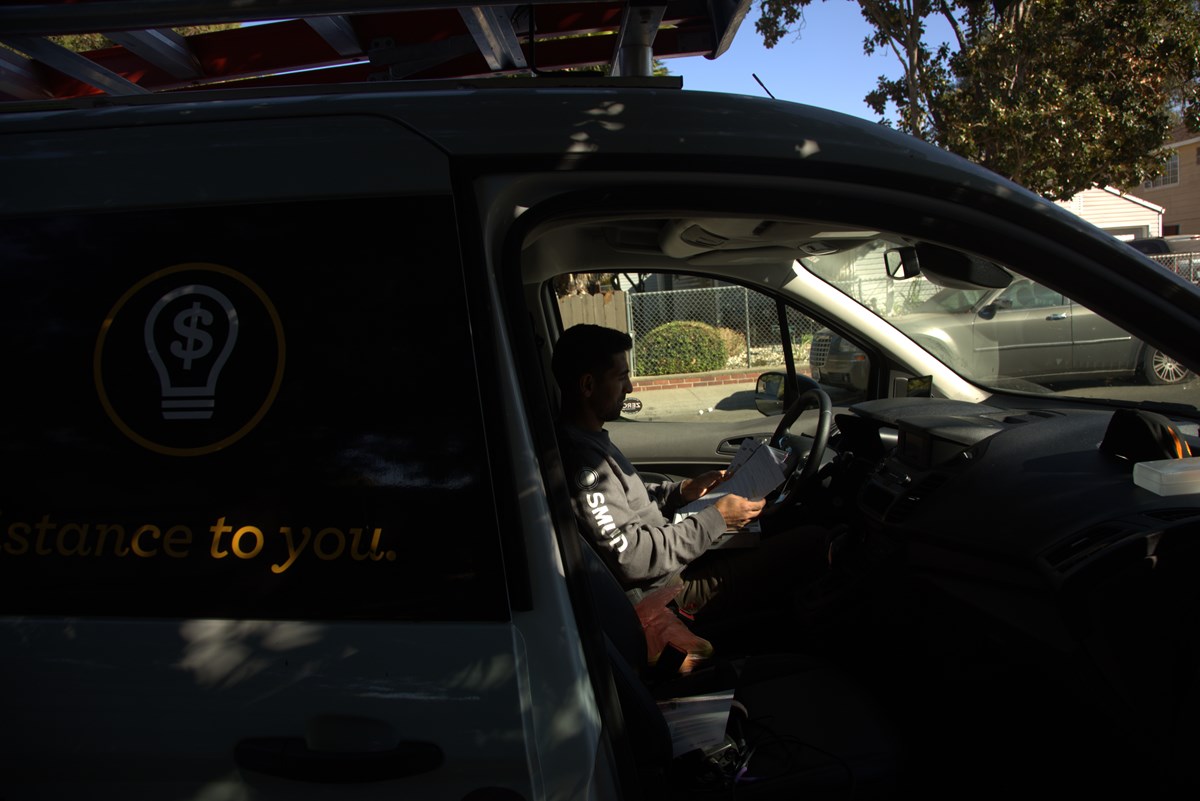 Jose Medina is an energy specialist with SMUD who assesses the homes of customers interested in participating in the program.Manola Secaira / CapRadio

Daniel says she doesn’t see herself as an expert on greening her home, but she knows enough now to talk to others about the program.

“I don’t have to be a scientist to talk about all these things,” she said. “But I can talk about it so people understand.”

And hopefully, she said, her words will help others get on board, too.