By Ashley A. Smith, EdSource

Undergraduate enrollment in California State Universities continues to suffer from a pandemic-induced drop as fewer transfer students arrive from the state’s community colleges.

Despite first-time freshman numbers rebounding to their pre-coronavirus pandemic levels, the decreases in transfer are having an impact on the 23 Cal State campuses.

“We now face a challenge that requires our collective and immediate attention, as well as the resolve to be nimble and creative in our adaptations,” interim Chancellor Jolene Koester recently told trustees about the system’s enrollment challenge.

Overall undergraduate enrollment for the Cal State system fell once again, to 404,820 students this fall — about 17,500 fewer students than the previous year. The decline continues a trend that started last year. Despite the pandemic, CSU saw enrollment gains in 2020, but by 2021, 17 of 23 campuses saw declines. This fall, only three campuses saw a slight uptick in enrollment: Cal Poly Humboldt, CSU San Bernardino and San Diego State. 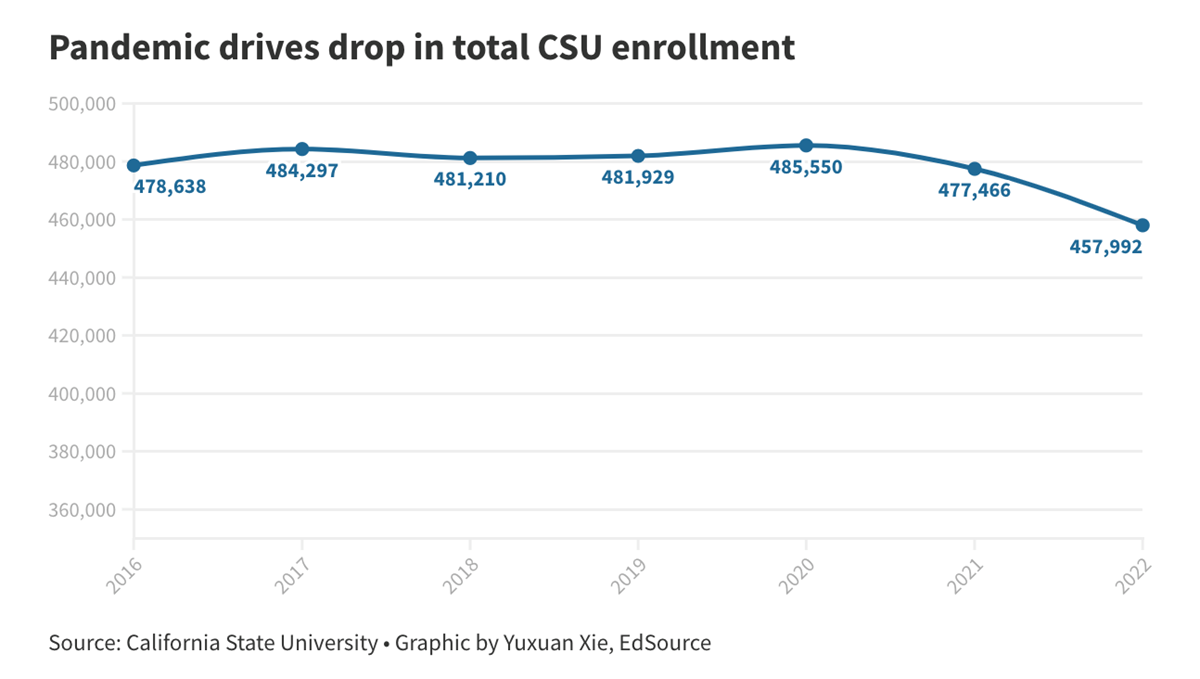 “I want to be clear about this,” she said. “This is not an individual university or campus issue. This is a system issue.” 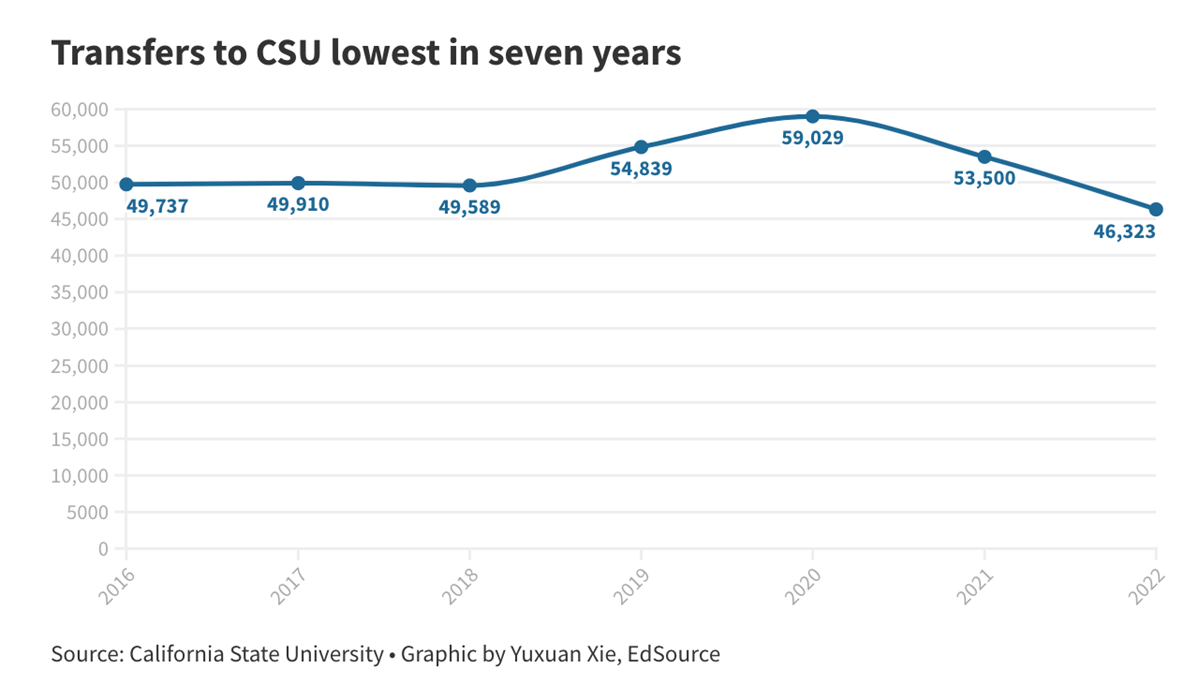 A recent report by the Public Policy Institute of California explained that the community college losses are due largely to the pandemic and the long-term effects of declining birth rates.

The declines “may have set California’s higher education system back” by limiting its ability to “promote economic mobility among the historically underrepresented,” according to PPIC. 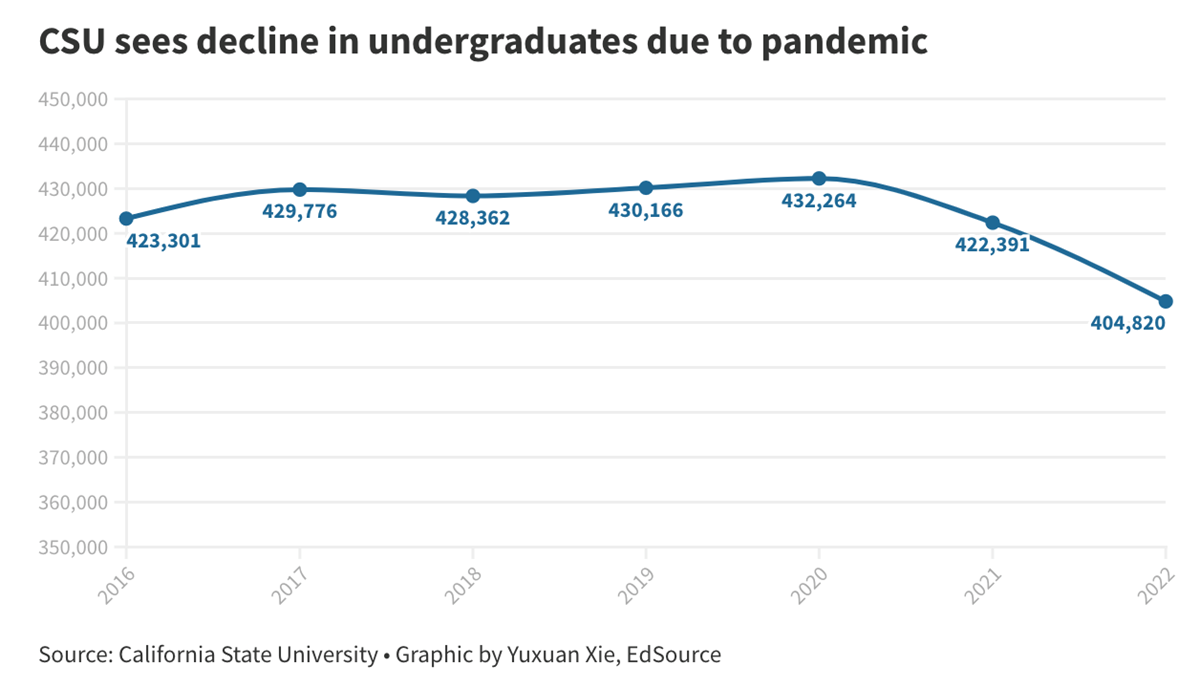 But CSU isn’t alone. Nationally, public four-year universities lost 1.4 million students between 2019, the year before the pandemic, and spring 2022, a drop of 3.4%.

Koester said that “now is not a time to panic,” and CSU has met with officials in the governor’s office and the Legislature to inform them of the situation. The system expects that it will be more than 25,000 fewer full-time students — almost 7% — below the funded 2022-23 California resident enrollment target.

Earlier this year, CSU made a budget agreement with the governor’s office to receive financial increases of 5% over the next five years that included making progress on growing enrollment. CSU agreed to add 14,000 more undergraduate students over four years through 2026-27. That’s equivalent to annual enrollment growth of 1%.

Koester said leaders in the governor’s office and Legislature “understand that declining enrollment is not unique to the CSU, but rather a national trend” and the lingering impact of the pandemic has compounded existing demographic changes.

Meanwhile, the chancellor’s office is meeting with campus presidents and senior administrators to develop strategies to increase applications and student retention, she said. One silver lining for the Cal State system is that the system continues to attract new students.  First-time, first-year enrollment increased to more than 65,000 students, Koester said, adding that the system is back to its pre-pandemic numbers for the freshman group.

But transfer applications to the system continue to lag, Koester said.

“I am indeed heartened by the positive signs that our work has produced,” she said referring to continuing efforts to attract and keep new students.