A rendering released by the Sacramento Zoological Society and the city of Elk Grove shows what the enterance could look like at the possible Elk Grove zoo site.

The city of Elk Grove and the Sacramento Zoological Society have released renderings for the “state-of-the-art” park poised to replace the zoo’s Land Park location. The two groups have been discussing a potential move since 2021, though the Elk Grove City Council has not officially decided to start the project.

The renderings — prepared by SHR Studios and Mangolin Creative and released last week — reveal an immersive zoo concept, with exhibits and experiences that would bring visitors face-to-face with animals in their natural habitats.

Portions of the park’s design will emulate the landscape of the savannas in Tanzania and East Africa. Animals like okapi, black-and-white colobus, brown cranes and guineafowl, all native to central African forests, will live together in a spacious enclosure that closely replicates their natural habitat.

“The most exciting part of these conceptual renderings are the depictions of the interactions between the animals and people,” said Jason Jacobs, the Sacramento Zoological Society’s executive director.

The design boasts some new features unfamiliar to the current zoo location, like a restaurant with close-up views of giraffes and cabin-tents that would allow people to camp alongside Hippo River, one of the areas where the zoo’s hippopotamus will roam.

Renderings also reveal a 10-acre parking lot, which the zoo’s Land Park campus does not offer. 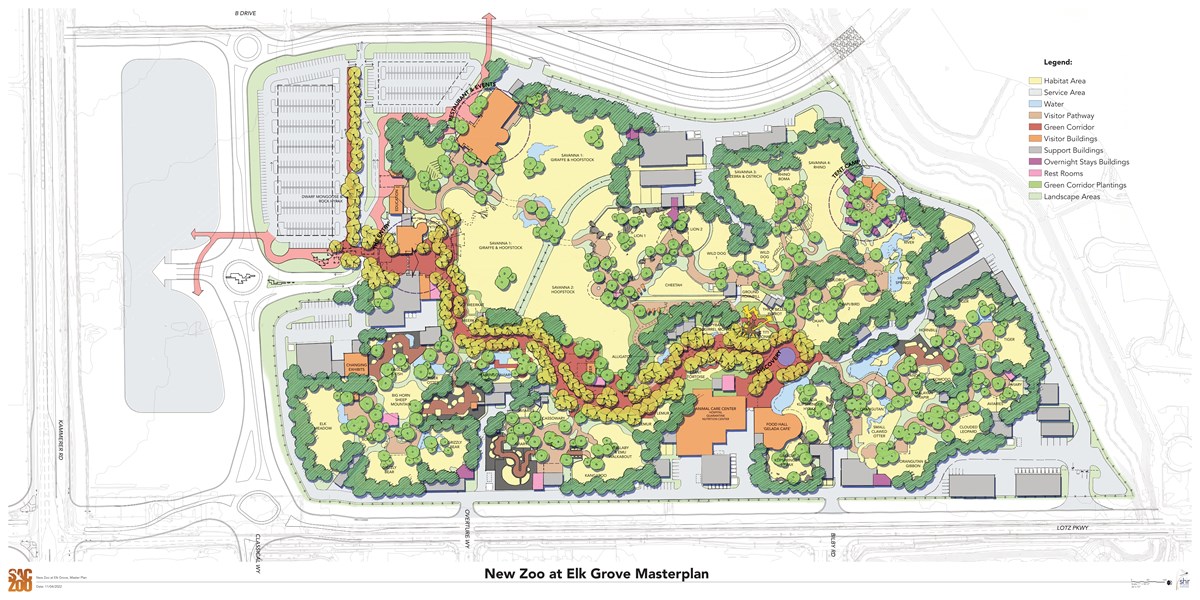 “The renderings really help show the vision and the possibilities for this project and what it could bring to our region, but there is a lot of work that needs to be done,” Elk Grove City Manager Jason Behrmann said in a prepared release. “The renderings help us to better understand the costs and how we might be able to construct the zoo in phases, but it also presents an opportunity to start a dialogue with other sources for funding and collaboration.”

Zoo officials say the current 14-acre Land Park campus, which has been in use for 95 years, is too small to house some larger animals and expand attractions, and that aging infrastructure could affect the zoo’s accreditation.

In 2021, the Sacramento Zoological Society and the city of Elk Grove announced they had started negotiations for a more modern and spacious zoo. City officials approved the purchase of a 100-acre lot on Elk Grove’s south side, near the intersection of Kammerer Road and Lotz Parkway in February this year, according to a report from the Elk Grove Citizen. A portion of the lot would be used to house the new zoo.

If the plan goes through, Jason Hill with SHR Studios said this project will be the first large-scale animal park built in the United States since 1998, when Disney’s Animal Kingdom opened.

Now that renderings have been created, Zoo officials say next steps include developing a schematic design, financing plan and completing an environmental impact review. Elk Grove City Council could make their formal consideration for the project in late 2023, which would officially spark the processes for planning both construction and animal relocation.