Leora Matranga, class of 1952, shows the collection of artifacts and displays at the Grant Union High School Museum Monday, Sept. 12, 2022.

Alan Rowe, founding president of Grant’s Black Student Union and the walk-out’s organizer, wasn’t sure it would happen. The march was supposed to start at 10 a.m., but administration kept Rowe away from the school until 10:15 a.m., he said, and he returned to empty hallways.

“In the auditorium waiting for you,” came the answer.

Rowe entered and saw hundreds of students. Shaken up by the crowd, the principal offered Rowe a microphone and said he could do the celebration program in the auditorium.

But “he didn’t know all I needed a microphone for was to tell people” to go march, Rowe said, laughing. He calls it Sacramento’s first unofficial MLK celebration.

Rowe, who graduated in 1969, is one of many who has generational ties to the high school, located in north Sacramento neighborhood Del Paso Heights. While Grant and athletics are often mentioned in the same breath, he says Grant is much more than sports — it’s a community institution.

With the school celebrating its 90th anniversary this September, alumni are sharing Grant’s history. 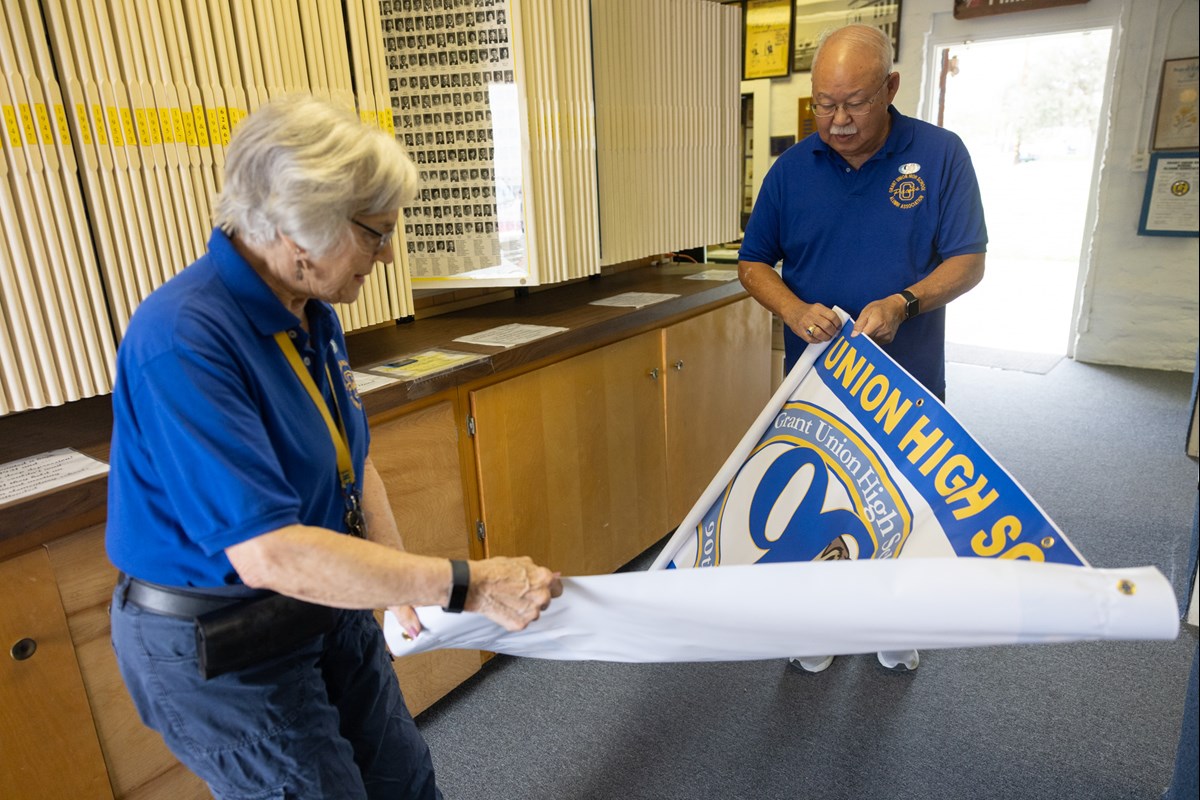 Alumni Kelvin Lee, class of 1964, and Leora Matranga, class of 1952, unfold a banner meant to commemorate the anniversary.Andrew Nixon / CapRadio

Founded in September 1932, the school serves a predominantly Hispanic and Black population and is Sacramento’s third-oldest, after Sacramento and Christian Brothers high schools. It’s grown from portable classrooms to a sprawling campus with a garden, community pool, theater organ, alumni museum and an incoming sports complex.

As a result, 600 people — 580 students and 20 teachers — became Grant Union Phantoms on Sep. 12, 1932, when the school opened its doors for families living north of the American River who would’ve otherwise attended Sacramento High. After a student suggestion, the Phantoms became the Pacers. The school’s colors were purple and gold. 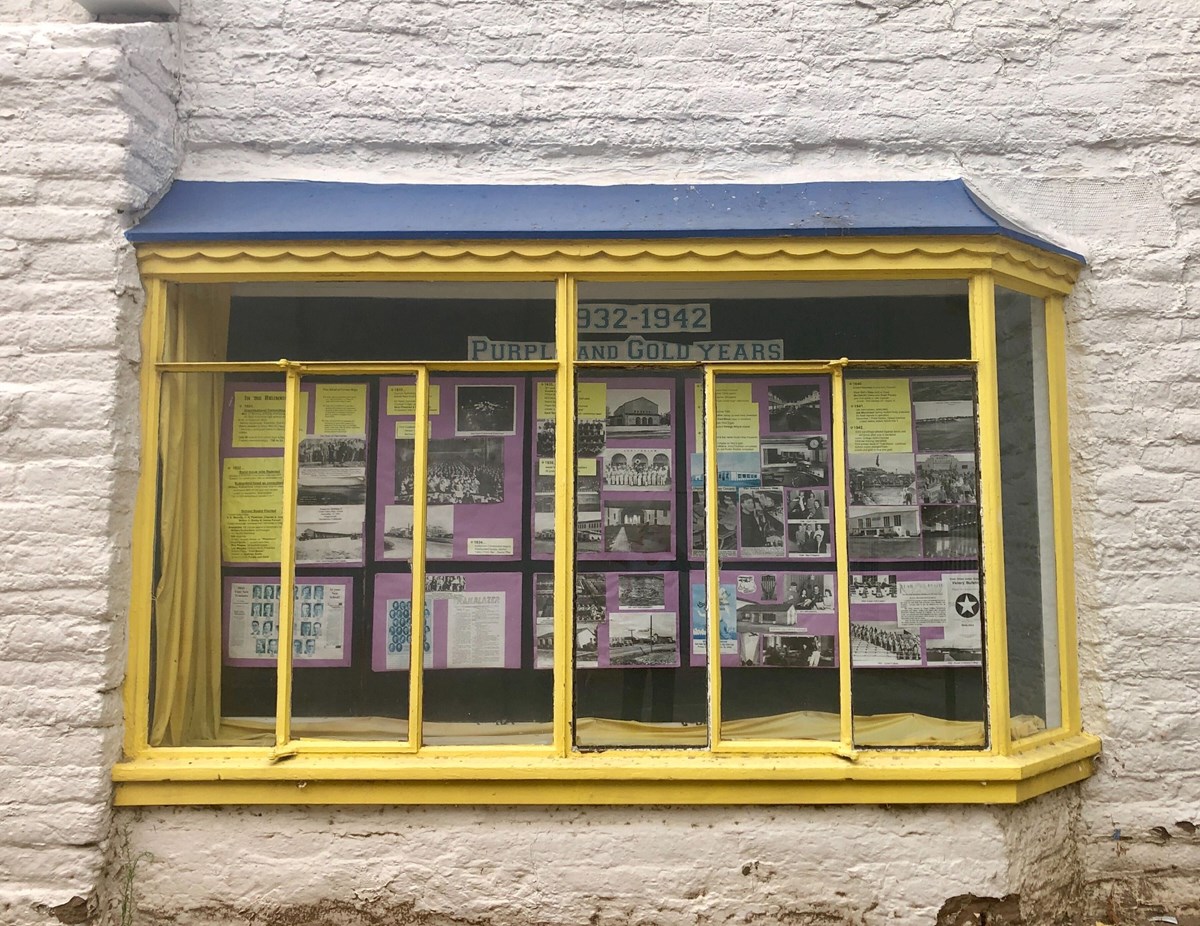 For the first three years, classes were held in portables known as the “chicken coops,” according to a description from the alumni museum. Grant received funding through the Public Works Administration to support the construction of Grant’s community pool and football stadium along with its first building.

The end of the decade also saw the completion of a full theater pipe organ, assembled with pieces from Reno, San Francisco and Redding, and first played by student George Wright, who became a world-famous organist.

World War II brought changes to the campus: With purple dye harder to obtain, in 1942 the Pacers began donning blue and gold. A year earlier, due to increased demand for help with the war effort, the Grant Technical School was established as part of the high school to offer training to personnel at the McClellan Air Force Base. The school was also chosen as a site for a Women’s Army Auxiliary Corps training center in 1943.

Retired plumber Frank Fuson graduated in 1954, when the aircraft mechanics classes ended due to lack of funding.

The parking lot was a de facto hangar, he said: “We had several airplanes out in the parking lot, full-size — one P-38 fighter plane, a cargo plane, one of the old biplanes they train pilots in.”

Because of Del Paso Heights’ proximity to the Air Force base, the war also ushered people to the area, which kickstarted new home construction and the post-war baby boom. Norte del Rio High School was established in 1955 to accommodate the growing student population.

It was a complete high school with everything but a football stadium, which it shared with Grant until 1982. Then, Norte became Martin Luther King Jr. High and Grant’s former feeder high school became Grant’s West Campus.

Several new structures opened toward the end of the ’90s, including the alumni museum in 1997. The school’s pool was also renovated in 2017 after nearly a decade of being closed, and a community sports complex is currently under construction. 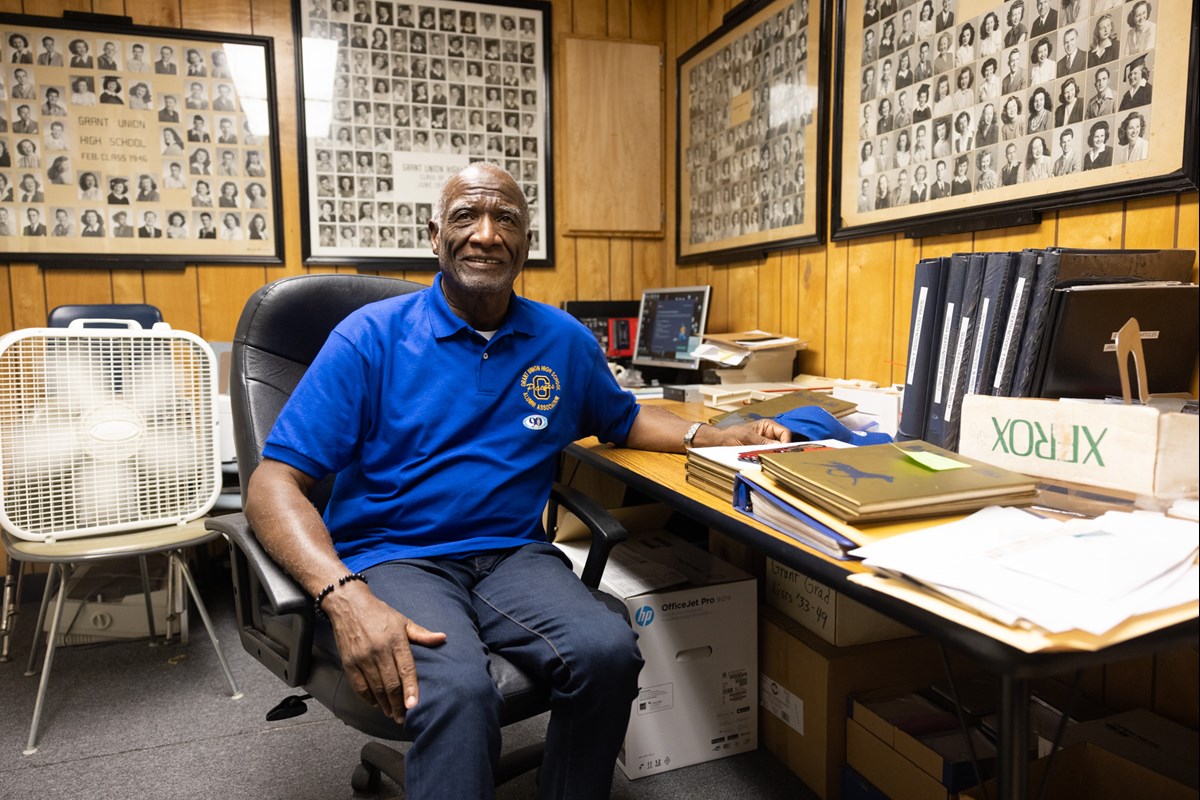 Grant has served as a community center for nearly a century since its 1932 founding, with the school educating generations of families.

Rowe is part of a multigenerational Grant family. His mother graduated in 1944 as one of the first Black students at the school, and Rowe’s son became the third generation to graduate from Grant in 1988.

The school has been there for families like Rowe’s in Del Paso Heights through years of white flight, economic downturn and city disinvestment, beginning in the 1960s when Sacramento annexed North Sacramento and continuing when McClellan Air Force Base closed in the early 2000s.

Its pool, open to the general public outside of school hours — which continues today — was “the place everybody went during the summer,” Rowe said.

“In the ’60s, Grant was starting to have a reputation that was not as positive as some of the other schools in the community,” he said. “But it has a rich history and a richness about it that comes from standing for each other and standing for what you believe in, what you care about.”

To him, the Pacer experience is “having people who believe in you, in spite of the circumstances and the odds against you.”

Sarky “Bill” Malkasian, who was Grant’s principal from 1973 to 1983, wanted to build that experience, which he wrote “meant involving everyone in the school in the education of our students.”

“On Parent-Teacher Night, the mothers and fathers were reluctant to speak up,” he wrote in Mayor of the Heights. “I told them not to hesitate to speak their minds, knowing they might feel uncomfortable speaking English. I knew how they felt, because my parents had had the same problem.”

When Graciela Garcia-Torres attended Grant from 1987 to 1990, she said her experience in ESL classes reflected that understanding culture.

“Grant was a home for me,” said Garcia-Torres, who came to the States as a child. “The people there were just the perfect individuals to be part of who I am now. It’s a place that strives to do good by kids.”

“It’s not an exaggeration to say that everything stopped in our communities until the game was over,” said Lee, who graduated in 1964. “No matter what kind of a football year you had, that was the whole season. You couldn’t talk about Thanksgiving in our community without talking about the game.” 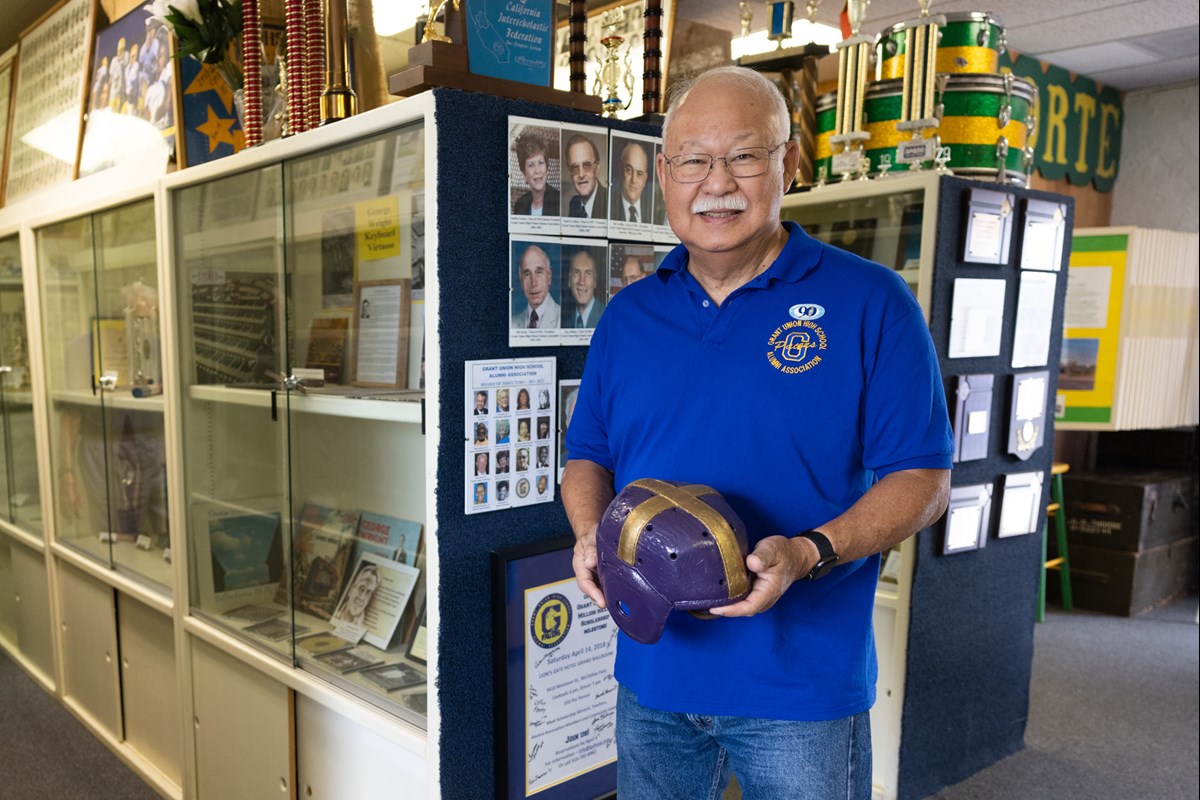 When Norte closed in 1982, the Pacers ultimately had a winning record against the Dons — 17 wins to 11 losses and a tie.

Crucial to Grant’s athletics success have been its coaches, who have helped the school build up a reputation as a local sports powerhouse in Sacramento.

Among them is Grant alum Deonard Wilson, who this year led the boys’ basketball team’s Sac-Joaquin Section 2022 Division II championship win. There’s former head football coach Mike Alberghini, who boasts a 282-win career — including the 2008 California State High School Football Championship — and had the Grant football field dedicated to him in 2016.

Alberghini also coached varsity baseball for 18 years, and Tony Bacos, who graduated from Grant in 1988 as one of Alberghini’s players, now donates $20,000 a year to the alumni association for a scholarship in his former coach’s name.

“It was very obvious he really cared about his players — not just what they could put up on the field in terms of stats, but really took a personal interest in wanting to be helpful to them,” Bacos said. “I wanted to give back and honor him not for his coaching per se, but just for his caring and the impact he had on people beyond just the athletic side of things.”

Leron was the St. Louis Cardinals’ number 1 pick in the 1966 draft, and says Rainey wrote letters to all the major league teams about having a prospect on his team.

“My senior year, there were 10 to 15 baseball scouts at every game I was playing at,” he said.

He remembers one game against McClatchy High where he was batting against another major league prospect, Pat Paul, being scouted by the St. Louis Cardinals.

He hit a ball off a fastball measured at 575 feet, and the Cardinals’ scout, who was scouting Pat Paul, “scratched his name off and put my name in the slot”, Leron said.

“Mr. Ramey was really good — he was a great coach for us.”

Located to the west of the Grant auditorium, the museum was formerly the school’s print shop and student store. It chronicles the school’s history from 1931 to the present, with displays dedicated to the school’s role in World War II, famous alumni like Wright, the organist and plays the Grant drama department staged.

While the museum runs on alumni memorabilia donations, founding alumni association president Sondra uncovered the initial collection in the Grant library’s upstairs when preparing for Grant’s 50th anniversary celebration, thanks to the school’s custodian.

“They went over there, climbed the ladder and all of this stuff was in there,’” Leora Matranga, the museum’s director, recounted. “They said, ‘Oh my gosh, we could have a museum.’”

Matranga graduated in 1952 and arranged the museum’s various displays. 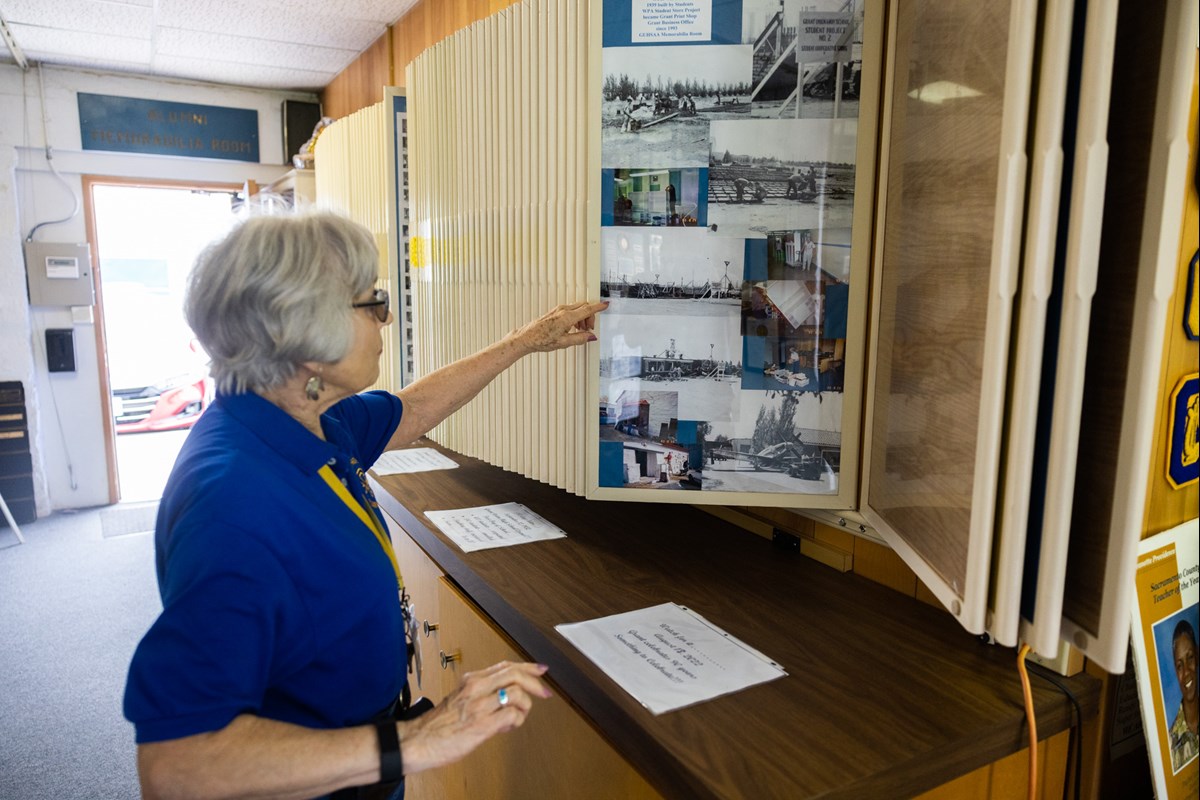 But most often viewed are the large wooden panels mounted to the left wall of the museum arranged like a yearbook — photos of graduating classes from 1932 to 2022 have been laminated and placed on the panels for people to look through. Because Norte del Rio split off from Grant, the museum also contains Dons memorabilia.

Kelvin, who is the current president of the alumni association, says he’s seen people “light up” when they see their family’s class pictures in the museum, like one current student who came in looking for his father and ended up finding his grandmother and grandfather’s photos, too.

Sometimes, the fascination is an attendance hazard, Matranga said.

“School bells don't ring in here, so we put up a sign [underneath the class picture panels] so kids wouldn’t be late for class.”

But the alumni association’s board worries about lack of younger alumni participating in the association’s work, which also includes funding scholarships for Grant students each year through membership dues and alum donations like Bacos’.

“Everybody's getting older,” Sondra said. “It's the younger ones that have to learn what to do, how to do it, and take over.”

Doris Morris, the alumni association’s secretary, graduated in 1972 and says she’s hoping younger alums “see the importance and the give-back nature” of being involved with the association — and that they can help with revamping the museum’s online presence, from redoing its web page and starting social media.

Kelvin says the association is planning to talk about its work at numerous events throughout the year, including homecoming in October, an organ concert in November, the Martin Luther King Jr. celebration in January and the Grant open house in April, which will be the major 90th anniversary event.

Grant graduates this year will have a special logo on their diplomas indicating they graduated during the school’s 90th year.

Correction: This story has been updated to indicate Sondra was the person who brought down the memorabilia from the Grant library upstairs, to add the museum’s open hours and to correct the spelling of Morris’s last name.