An electric vehicle charges at a station in Millbrae.

Photo by Martin do Nascimento, CalMatters

New gasoline-powered cars will be banned in California beginning with 2035 models under a new groundbreaking regulation unanimously approved today to force car owners to switch to zero-emission vehicles.

In its biggest move yet to reduce reliance on fossil fuels and fight climate change, the new rule approved by the state Air Resources Board culminates a decades-long effort to transform the auto and power industries and change the cars people drive — the state’s leading source of air pollution.

The regulation is the first in the world to end the sale of traditional gas-powered vehicles and ramp up sales of cars powered by electricity. A small number of other states and nations have set only voluntary targets.

The proposal was first unveiled in April. In response to several board members’ concerns, the staff made minor revisions today to address issues related to electric car battery durability and added provisions to enhance assistance for low-income residents.

“This regulation is one of the most important efforts we have ever carried out to clean the air,” said Air Resources Board Chair Liane Randolph. “Our previous regulations to make cars cleaner made improvements, but those improvements were incremental. This regulation will essentially end vehicle emissions altogether.”

Existing gas-powered cars and used car sales are unaffected by the mandate, which only sets a zero-emission standard for new models.

The switch to zero-emission vehicles marks a historic precedent that would ripple across the country, paving the way for other states, and perhaps countries, to follow.

John Bozzella, president and CEO of the Alliance for Automotive Innovation, a trade group representing automakers, said automakers support the transition to electric cars, but called the timeline “very aggressive,” adding that it will be “extremely challenging” for the industry to adjust in time.

“Whether or not these requirements are realistic or achievable is directly linked to external factors like inflation, charging and fuel infrastructure, supply chains, labor, critical mineral availability and pricing and the ongoing semiconductor shortage,” he said. “These are complex, intertwined and global issues well beyond the control of either the California Air Resources Board or the auto industry.”

Environmental justice advocates, who had been calling for a sales goal of at least 75% zero-emission cars by 2030, expressed disappointment at today’s hearing. While the rule is a “step in the right direction,” the board missed an opportunity to include more robust provisions in the policy to make sure low-income people can afford them, according to Roman Partida-Lopez, legal counsel at the Greenlining Institute.

“California had an opportunity to set a stronger standard,” he said. “The board came up short by not making this a more stringent rule or one that has environmental justice provisions that are mandatory rather than voluntary.”

For many families, electric cars are an attractive option, but barriers keep them out of reach. New electric cars range in price from $25,000 to $180,000. Price markups at dealerships due to car shortages and high demand have also inflated the cost of some electric cars by more than $10,000, sometimes as high as $15,000.

Air board officials project that the cost of an electric car will be equal to a gas car’s price as early as 2030 as supplies surge to meet the mandate.

Despite the higher upfront cost, the air board’s analysis projects that drivers will end up saving much more in maintenance and operation expenses. Charging at home costs about half as much as gas for the same number of miles driven. ​​Drivers in California already pay some of the highest gas prices in the country.

At today’s hearing, air board members, environmental justice advocates and members of the public echoed concerns they raised during a June hearing about the proposal —  challenges with high vehicle costs, lack of charging infrastructure and consumer reluctance.

Air board staff member Anna Wong, who is part of the agency’s sustainable transportation and communities division, acknowledged that the plan has a “stringent but achievable path.” Many of the changes they proposed in the revised policy include provisions to help manufacturers cut costs for consumers, she said.

Under the mandate, electric cars must have a range of at least 150 miles on a single charge. Batteries will need to be more durable and carry a manufacturer’s warranty. At least 80% of the original range must be maintained over 10 years, starting in 2030, a year earlier than initially proposed.

To ease the strain on automakers, the staff reduced the range requirement to 75% for the first eight years that a new car is on the road, extending it by an additional three years.

Automakers will be allowed to use a credit system that allows them to meet a lower percentage of sales if they offer cheaper cars at dealerships and participate in state subsidy programs.

To ensure enforcement, state officials could penalize manufacturers that don’t meet their yearly percentages with hefty fines of $20,000 for every car they fail to produce in a given year, according to air board staff. Automakers that fail to meet those requirements would need to get credits from another manufacturer that already met their targets. Air board staff also assured the public that they could amend the regulation at any point to address lingering equity and compliance issues.

Can the power grid cope?

Critics say the state needs more charging stations as electric car sales surge. California has about 80,000 stations in public places, falling short of the nearly 1.2 million public chargers needed by 2030 to meet the demand of the 7.5 million passenger electric cars anticipated to be on California roads.

Another question remains: Will there be enough electricity? Experts say California needs a more reliable power grid, sourced from climate-friendly renewables like solar and wind.

California’s electricity consumption is expected to surge by as much as 68% by 2045. But the power grid — marred by outages and increasingly extreme weather — needs massive investments to attain the clean-energy future outlined in California’s five-year climate roadmap, called a scoping plan.

Gov. Gavin Newsom in recent months has been pushing the idea of keeping the Diablo Canyon nuclear plant open, introducing draft legislation earlier this month that would continue operations past its scheduled 2025 closure date. It’s part of a wider effort to maintain the reliability of the state’s increasingly strained power grid and reduce its reliance on fossil fuels as California makes progress on transitioning to renewables.

But the contentious proposal, which would give owner Pacific Gas & Electric $1.4 billion, has widespread opposition. A new draft bill is being circulated within the Legislature and instead proposes using that money for renewable infrastructure.

California already has the largest zero-emission car market in the country, with more than 1.13 million plug-in vehicles registered across the state. Nationally there are about 2.64 million. That means California accounts for 43% of the nation’s plug-in cars. 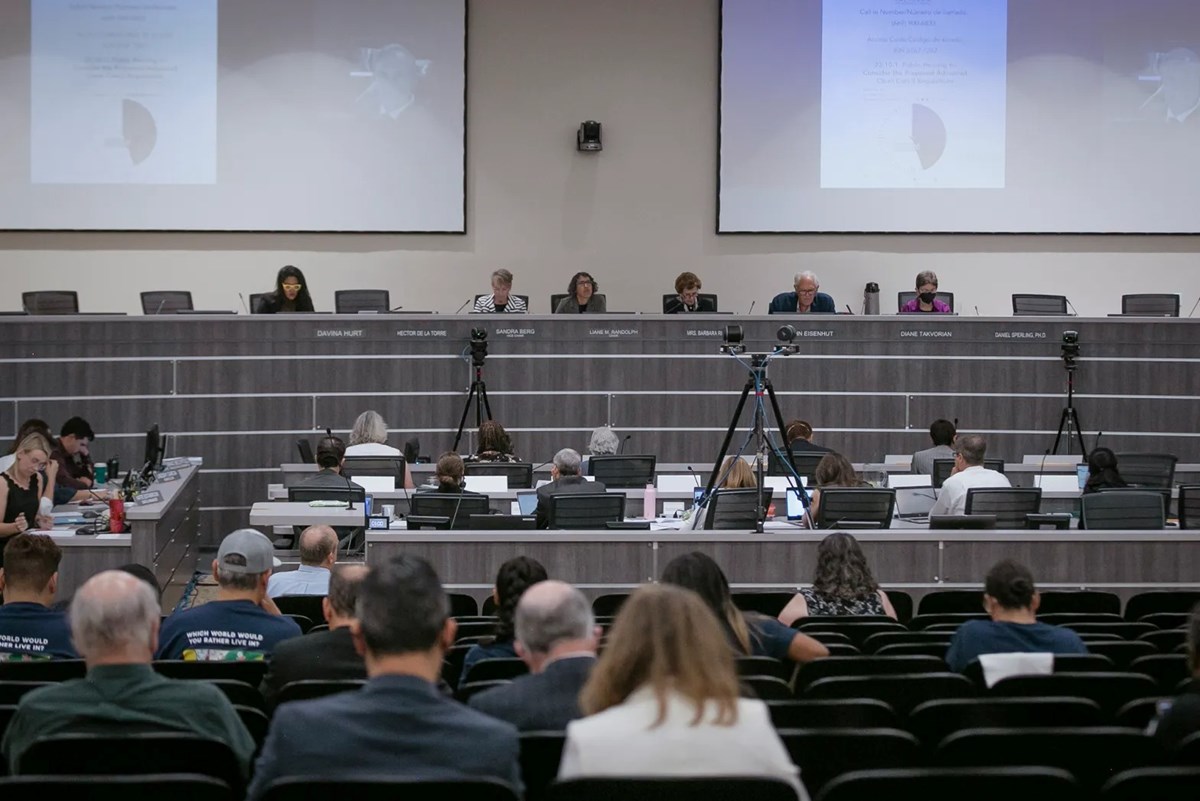 The California Air Resources Board is meeting today to vote on its historic zero-emission vehicle mandate.Photo by Rahul Lal, CalMatters

The board’s move today “is the most important action it has taken in 30 years,” said board member Daniel Sperling, who also is director of the Institute of Transportation Studies at UC Davis.

California often sets tougher climate change policies that the federal government then follows. There are also at least 16 states that currently follow the state’s strict auto emission standards that are expected to adopt these regulations. These states, along with California, represent about 40% of the country’s new car sales, according to the board.

“California now has a groundbreaking, world-leading plan to achieve 100% zero-emission vehicle sales by 2035,” Newsom, who in 2020 directed the board to develop the rule, said in a statement. “It’s ambitious, it’s innovative, it’s the action we must take if we’re serious about leaving this planet better off for future generations.”

Air board staff project that the new rule will reduce passenger vehicle emissions by more than 50% by 2040. That results in 395 million fewer metric tons of greenhouse gases — the equivalent of emissions from burning 915 million barrels of gasoline.

The rule is considered essential to reducing smog and soot pollution, which violates health standards in much of the state, and to meeting California’s goal of carbon neutrality by 2045.

Battling California’s severe air pollution for longer than half a century, the air board has long believed in the promise of an electric vehicle future, initially implementing a zero-emission mandate in 1990, requiring that 2% of new car sales between 1998 and 2000 be emissions-free, increasing to 5% in 2001 and 2002. The board reversed its decision six years later after automakers expressed concerns that the technology and battery lifespan were not advanced enough to comply.

State officials said Newsom’s $10 billion investment in vehicle incentives, charging infrastructure and public outreach over the next six years will be a critical tool to ramping up sales and improving access and affordability.

The proposal comes just a couple of weeks after Congress passed a sweeping climate bill, which pours billions into clean energy projects and renewables. The new law includes electric vehicle tax incentives that offer up to $7,500 in rebates for Americans who want to purchase a new zero-emission car or $4,000 for a used one. That rebate, in addition to the state’s multiple subsidy programs, are expected to help provide some financial relief for car buyers.