Sacramento faith leaders urged the City Council this week to end its policy of towing vehicles used as shelter by people experiencing homelessness, a practice the council voted to continue in December.

Leaders of more than 40 congregations signed a letter asking the council to stop the towing until the city can establish designated sites for unhoused people to park. The city has opened two “safe parking” areas over the past year, and plans to open more have stalled.

The call from faith leaders comes days after the release of a countywide survey that found nearly 1,100 vehicles are used as shelter by unhoused residents. The 2022 Homeless Point-In-Time Count also found nearly half of all unsheltered adults had to relocate their tents, vehicles or makeshift shelters due to a recent request from law enforcement. Altogether it counted nearly 9,300 unhoused residents in the county, a 67% jump from three years ago.

Swanson said the city’s code compliance team “does not determine how a vehicle is being used by its owner” when it decides to remove it. Citing a FAQ on the city’s response to homelessness, Swanson said people who are unhoused and use vehicles as shelter “are subject to the same traffic laws and parking regulations as are the owners and operators of all other vehicles.”

Speaking at a press conference outside City Hall on Thursday, Sister Gloria Wadud of the Masjid As-Sabur mosque in Oak Park called the policy inhumane. After natural disasters leave thousands homeless, she noted, the government provides them with shelter immediately.

Standing outside the minivan he calls home in North Sacramento this week, Michael Hogan said he’s just trying to get by. The 39-year-old said he lost his job as a truck driver during the pandemic. When unemployment ran out six months ago, he and his wife, Jennifer Stater, lost their apartment and moved into the van with their two dogs. 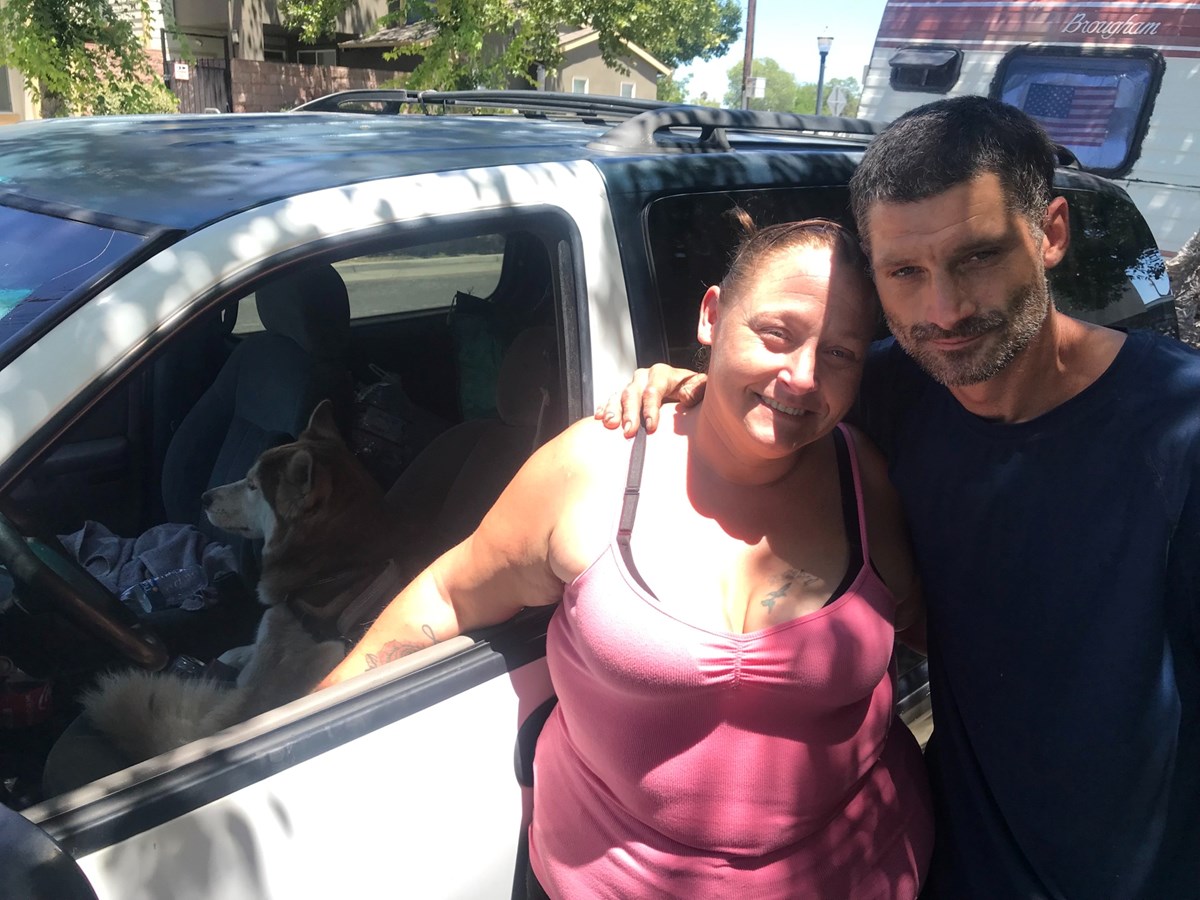 Michael Hogan and Jennifer Stater have lived in their minivan with their two dogs in North Sacramento for about six months. The couple said they could not afford their apartment following a job loss and unemployment running out.Chris Nichols/CapRadio

The couple said they were able to remain in the same spot for months, but recently police and code enforcement officials have forced them to move every three days, uprooting the little stability they have.

“I mean they have all these empty lots everywhere. Why can’t you just say ‘Here, you guys go here for six months. That’s what we got.’ That’d help out so many people out here. It would,” he added.

The City Council in December voted 6-3 to reject a call by Mayor Darrell Steinberg to outlaw the towing practice. Steinberg had asked for a ban on towing if residents did not have a place to relocate and find shelter. There are approximately 1,100 shelter spaces citywide, though they are typically full on any given night.

Last August, the council approved a comprehensive homelesseness strategy intended to add thousands of temporary shelter spaces — from tiny homes and respite centers to safe camping and parking sites — at 20 locations citywide. It was spearheaded by Steinberg with the goal of ensuring sites open in each council district.

But after opening two parking sites in early 2021, it took the city nearly a year to open a single new outdoor homeless shelter, a camping site at Miller Regional Park. City staff and council members have said bureaucratic hurdles along with neighborhood opposition have bogged down progress.

But as encampments spread further into residential areas, some neighborhood groups argue the city should retain its towing policy, regardless of whether safe parking sites have been established yet.

Dolores Sanchez said she’s sympathetic to the plight of unhoused people and helped homeless residents for more than a decade through volunteer work at her church. But she’s also advocated for the city to remove the growing collection of RVs, trailers and other vehicles used as shelter in her East Sacramento neighborhood. Sanchez claims they attract a larger group of people and illicit behavior. She added that she’s witnessed prositution, drug-dealing, fires and the dumping of trash at the sites.

“Allowing people to just park anywhere they want is having an impact on taxpayers and renters and homeowners,” Sanchez said. “My quality of life, having lived here since 1988, has vastly changed and not for the better.”

She encouraged the faith groups to open their parking lots and doors to unhoused residents as one solution. Many already open their doors as respite centers on the hottest and coldest days of the year.

Robert Engle, who owns a property on Western Avenue near an encampment, was one of dozens of people who called into the City Council’s December hearing to oppose the proposal.

“The invasion of these homeless in our area is a crisis,” Engle said at the hearing. “They bring in squalor. They bring in contamination. They are not tax-paying residents of Sacramento. They are transient, so the consideration that they are somehow constituents is ridiculous.”

In a written statement, Steinberg said he will continue to push for all levels of government to be “legally obligated to provide shelter, housing, and mental health care for those in desperate need, and that people have the same legal obligation to accept that.”

Mary Lynne Vellinga, Steinberg’s chief-of-staff, said there are no current plans to bring his proposal to end the towing practice back to the council.