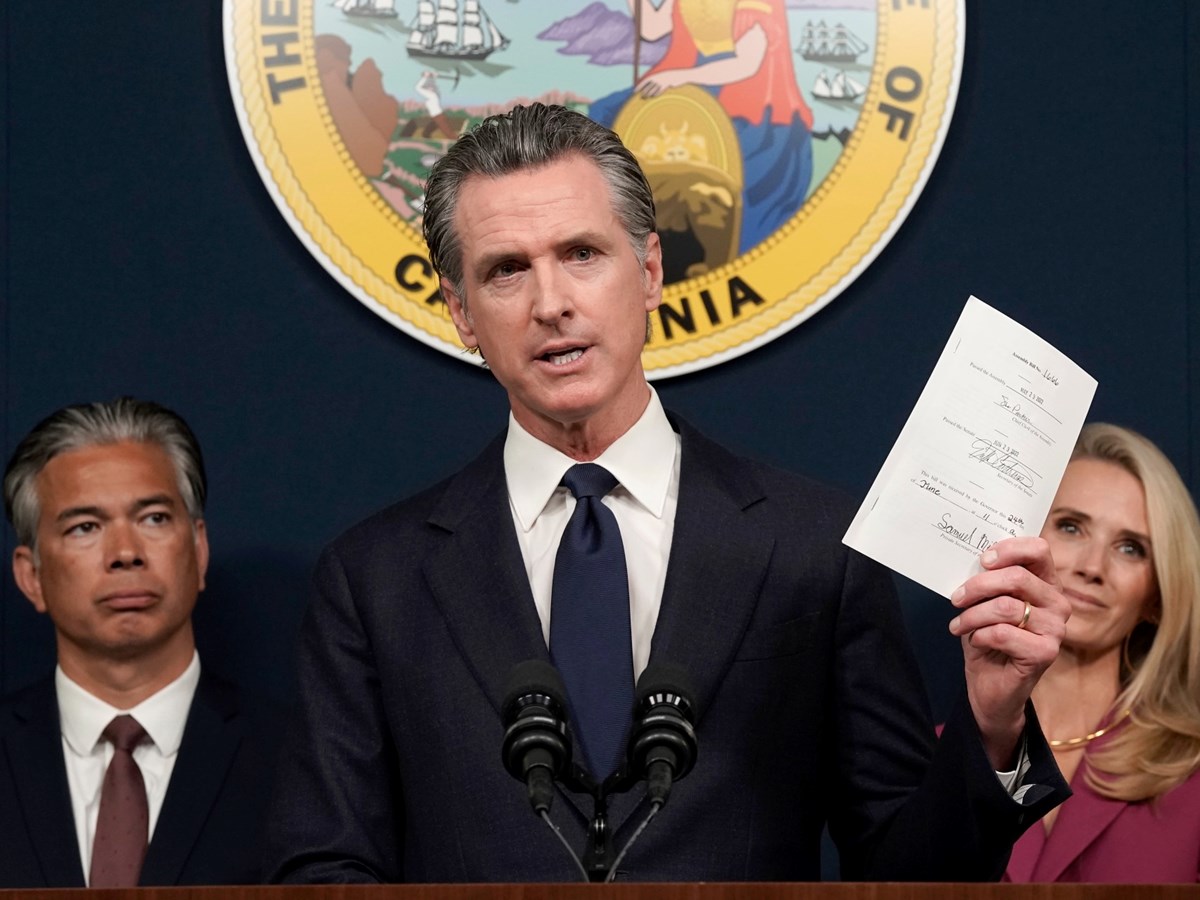 California Gov. Gavin Newsom displays a bill he just signed that shields abortion providers and volunteers in California from civil judgements from out-of-state courts during a news conference in Sacramento, Calif., Friday, June 24, 2022.

“I want people to know all around the rest of the country and many parts of the globe, that I hope we’re your antidote to your fear, your anxiety,” Newsom said at a news conference on Friday in Sacramento.

During his remarks, the governor signed Assembly Bill 1666, which is intended to shield patients and providers who have or assist with an abortion in California from being sued in other states with abortion bans.

“The measure comes as lawmakers in Missouri advance a proposal to allow private citizens to sue Missouri residents who have an abortion out of state, as well as their providers and anyone who assists them in seeking an abortion,” Newsom’s office explained in a news release.

Also on Friday, Newsom said California will provide health care clinics with tens of millions of dollars in grants that can be used to support people who come to the state seeking an abortion. The grants would be part of the governor’s proposed $125 million Reproductive Health Package, an effort to expand abortion access and help prepare for the influx of people seeking reproductive health care from other states.

The governor warned the overturning of Roe won’t be the last rollback on people’s rights. He predicted the conservative majority on the Supreme Court and Republican lawmakers will target same-sex marriage next.

“They’re coming after you next. Period. Full stop,” said Newsom, who in 2004 as then-mayor of San Francisco directed his city to issue same-sex marriage licenses a decade before the Supreme Court recognized that right.

In the ruling overturning Roe, Justice Clarence Thomas argued the court should also reconsider rights to contraception access, as well as same-sex relationships and marriage.

But state Senate Leader Toni Atkins said California will work to preserve all of those rights, for anyone in the country.

“You are welcome here. You have choices here. And you have allies here,” Atkins said at the press conference.

While the ruling does not change abortion access in California, which has legal protections for it, lawmakers and advocates decried the decision and the implications it has for people across the country.

"We are not going to go backward in California and we have the tools and the ability to fight to protect a woman's right to choose in our state," Lieutenant Governor Eleni Kounalakis said at a press conference Friday morning. "It is still legal here. It's going to still be legal in California."

Kounalakis says the caucus is working on more than a dozen bills expanding access to reproductive rights. That includes a proposed amendment to the California Constitution explicitly banning the state from denying or interfering with abortions or contraceptives. The amendment has already cleared two legislative committees. Voters must approve the amendment before it becomes law.