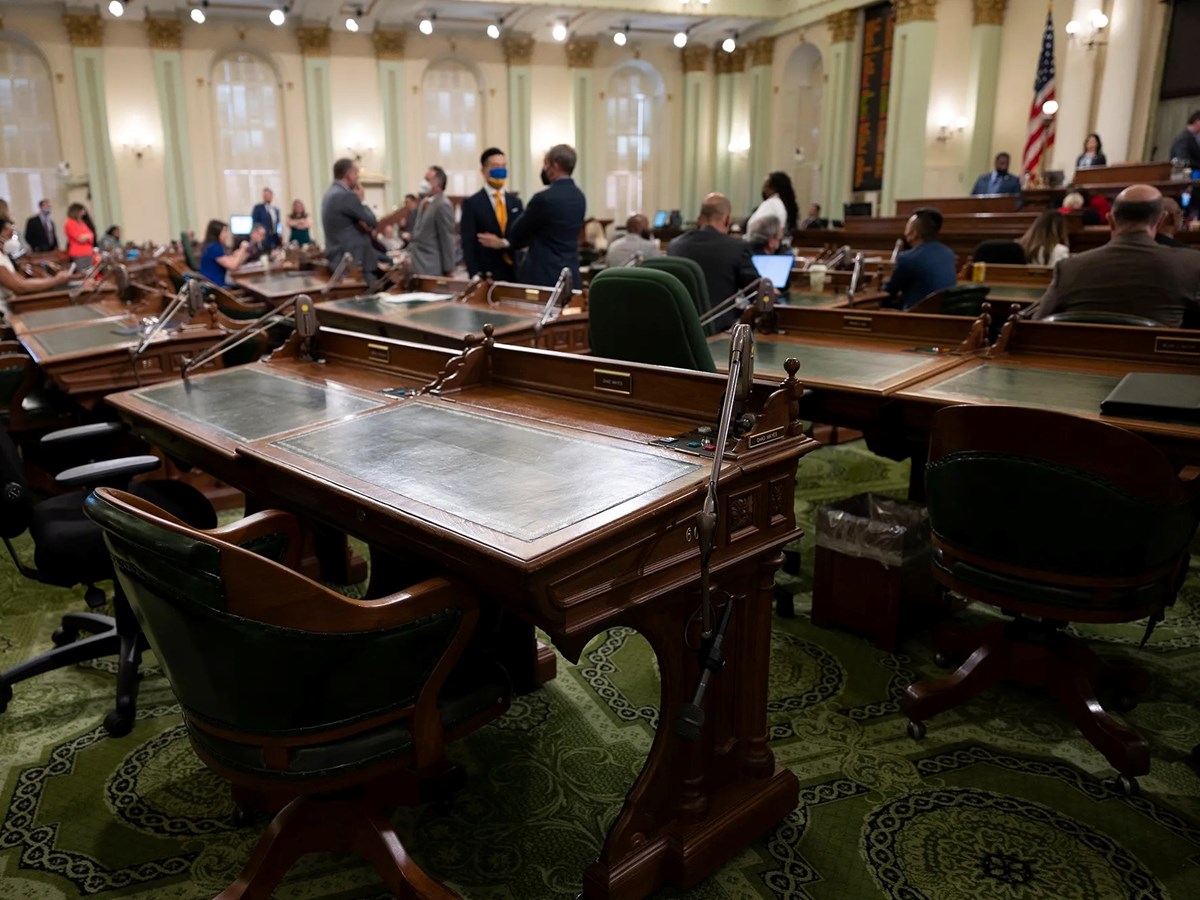 Lawmakers on the Assembly floor at the state Capitol on May 31, 2022.

California lawmakers approved a $300 billion state budget today, but it is far from final as legislative leaders continue to negotiate with Gov. Gavin Newsom over items including a proposed multibillion-dollar rebate to taxpayers.

The Legislature adopted the record spending plan anyway, to meet a constitutional requirement that members pass a balanced budget by Wednesday or forgo their pay. The bill will be sent this week to Newsom, who then has 12 days to sign or veto it — another critical deadline that should propel the two sides toward a deal.

The start of the next fiscal year looms on July 1, less than three weeks away. Yet the budget process will likely extend well beyond that date, as lawmakers pass follow-up measures amending provisions of their spending plan to reflect compromises with the governor. That’s what happened last year, when Newsom and legislative leaders announced an agreement in late June and continued to put finishing touches on it into August.

Newsom and the Democratic-controlled Legislature share general values for state spending and their budget proposals have broadly similar frameworks. But with an unprecedented amount of money at their disposal — unexpectedly strong recovery from the coronavirus pandemic, especially among the wealthiest Californians, has produced a discretionary surplus of almost $49 billion, state officials estimate — they have yet to agree on many of the details.

State Sen. Nancy Skinner, a Berkeley Democrat who leads the Senate Budget Committee, said the Legislature is more than 95% in agreement with Newsom and she expects they will reach a consensus soon.

“I like these kinds of negotiations,” she said in an interview. “Our perspectives are so aligned that we’re in good shape.”

A spokesperson for Newsom said the governor still wants “more immediate, direct relief to help millions more families with rising gas, groceries and rent prices,” as well as more money directed to pay down debts, build reserves and “shore up our state’s energy supply to ensure we can continue to keep the lights on.” He also “remains opposed to massive ongoing spending,” Anthony York, Newsom’s senior advisor for communications, said in a statement.

The budget bill approved by the Legislature today includes about $236 billion in general fund expenditures, with the remainder coming from special funds. It would grow state budget reserves to nearly $38 billion, increase compensation rates for state-subsidized child care providers and expand eligibility for Medi-Cal, the state’s health insurance program for the poor, to all adults, regardless of immigration status, by the start of 2024.

Under the legislative plan, California would spend $1.7 billion over the next few years to build up its health care and social services workforces, as well $100 million to develop a generic insulin and $100 million to establish trust funds for low-income children who lost parents or caregivers to COVID-19.

Anticipating a U.S. Supreme Court ruling as soon as this month that would overturn constitutional protections for abortion rights and potentially bring a wave of women to California for care, state leaders want to significantly expand abortion access. The budget would set aside more than $130 million to train more providers, enhance clinic infrastructure and security, reimburse providers who care for people without health coverage and establish a statewide fund to help patients with travel costs.

The Legislature overwhelmingly passed the measure, by a vote of 57–16 in the Assembly and 28-8 in the Senate. Republicans complained that not enough of the surplus was directed toward struggling Californians and budget reserve accounts, especially with a potential economic recession looming.

“As state coffers grow, family bank accounts are shrinking,” Assemblymember Vince Fong, a Bakersfield Republican, said on the Assembly floor. “Californians are rightfully frustrated. They are paying more and getting less. State spending continues to rise, but the problems get worse and crises go unaddressed.”

The biggest remaining dispute between Newsom and legislative leaders is over competing proposals to provide Californians with relief from soaring gas prices and inflation. The governor has pushed to send every registered vehicle owner in the state a $400 debit card — as many as two per person — at a cost of about $9 billion.

But Democratic lawmakers want to focus the rebate on low- and middle-income families, earning less than $250,000 for a couple or $125,000 for an individual. Their plan would cut $200 checks for each eligible taxpayer and their dependents, up to $800 for a household, at a cost of about $8 billion.

Both sides have agreed to a $21 billion climate package, but have not yet worked out how exactly to distribute that money among drought relief, wildfire preparedness, zero-emission vehicle incentives, clear energy development and other programs.

Other lingering disagreements revolve around higher levels of new spending proposed in the Legislature’s budget compared to the governor’s plan. At a Senate budget hearing last week, Erika Li, chief deputy director for the budget in Newsom’s Department of Finance, expressed opposition to several billion dollars in additional ongoing expenses that lawmakers are seeking for universities, housing and social safety net programs.

“Given the uncertainty of the economy and rising inflation, we’re concerned that the Legislature’s budget commits an unsustainable amount to ongoing expenditures,” Li said.

Those legislative proposals include increasing the state’s earned income tax credit, a tool for returning cash to low-income working parents, to at least $255 starting in 2023. The change would cost at least $400 million annually.

Lawmakers want to increase the base funding for the University of California and California State University by $150 million more than Newsom and pour hundreds of millions more into financial aid, expanding assistance to approximately 150,000 newly eligible students. They would also direct an additional $2 billion to student housing projects over the next three years.

The Legislature is pushing to create a new homeownership assistance program, setting aside $1 billion a year for the next decade to subsidize down payments for first-time buyers, who would eventually repay the money into a self-sustaining loan fund. Newsom has not signed off on that idea, nor on billions of dollars in additional funding that lawmakers have proposed for affordable housing development and homelessness services.