The pungent odor of motor oil and grease wafts through the air at JR Automotive in San Francisco as Jesus Rojas lifts the hood of a 2014 Honda Civic to inspect its engine.

Gasoline-powered vehicles like this one have hundreds of moving parts and other components that keep mechanics like Rojas busy. Rojas, 42, has spent much of his life refining the specialized skills needed to inspect and repair them.

But as California switches to electric vehicles in its battle against climate change and air pollution, these skills will be needed less and less over the next decade. By 2040, the state projects that nearly 32,000 auto mechanics jobs will be lost in California, since electric vehicles need far less maintenance and repair than conventional combustion engines.

“I’m not against electric vehicles,” said Rojas, who immigrated to the Bay Area from Mexico as a teenager and opened his own shop 11 years ago. “I’ve always loved cars and I’ll work on them until I can’t anymore. So we have to adjust. We have to get out of our comfort zones.”

In an effort to transform to a carbon-neutral, climate-friendly state, California’s proposal to phase out all new gas-powered cars by 2035 will drive a wide-ranging transition of the workforce.

Throughout the economy, an estimated 64,700 jobs will be lost because of the mandate, according to the California Air Resources Board’s calculations. On the other hand, an estimated 24,900 jobs would be gained in other sectors, so the estimated net loss is 39,800 jobs, a minimal amount across the state’s entire economy, by 2040.

But no single workforce in the state would be hurt more than auto mechanics: California has about 60,910 auto service technicians and mechanics, and more than half of those jobs would be lost over the next two decades if the mandate goes into effect, the air board calculates.

Alex Dirige, 67, an immigrant from Guam who has worked as a mechanic in San Francisco for more than 30 years, worries that the transition to electric cars will threaten the livelihoods of vulnerable groups like undocumented immigrants and cause many auto repair workers to leave the industry altogether.

The trade provides a steady and reliable income in California for many workers with no college degree. On average, mechanics across the state earn about $26 an hour or $54,190 a year, according to the U.S. Bureau of Labor Statistics.

“Many mechanics who have started working see that there’s not a long-term future in the auto repair business, with hybrids and electric cars coming out,” Dirige said. “The electric vehicle repair market is just about nonexistent. A lot of them would love to be in the field but they might choose to go into other types of employment.”

Who loses and who gains jobs

California is already suffering the ill effects of climate change — which damages its economy, not just its public health and its environment. About 40% of its greenhouse gas emissions come from transportation, the largest of any sector, so state leaders say reducing reliance on gasoline and moving towards electric cars is crucial to averting even more disastrous effects.

Some industries gain jobs while others lose them as the state shifts to zero-emission vehicles.

The retail trade sector, which includes gas station workers and automobile and parts dealers, would lose 38,669 jobs by 2040 or about 2% of the retail workforce. Most of the losses would be at gasoline stations. As the electric vehicle fleet grows, air board officials project gas stations could provide charging to offset the losses.

Some of the loss in the retail sector is due to less expendable income. Electric cars now cost more to purchase, although prices will drop and maintenance will cost far less, saving about $3,200 for the life of a 2026 car and $7,500 for a 2035 car, according to the air board.

Another 20,831 jobs in state and local government would be eliminated because of the decrease in gas tax revenue.

But the transition to electric cars also will create thousands of jobs. Southern California Edison, Pacific Gas & Electric and other power industry companies would benefit most, with the creation of about 5,600 jobs by 2040 as car owners spend more on electricity to power their vehicles. Insurance carriers will benefit from about 1,700 new jobs, while the construction industry is expected to gain about 3,600.

Since few vehicles are manufactured in California, the state is unlikely to see a surge in manufacturing in response to the mandate. Of the 44 major auto assembly plants in the U.S., most are located in the Midwest and the South, according to a 2021 report from the International Council on Clean Transportation, a nonprofit research organization.

Mechanics who work on internal combustion engines would still have plenty of work: The rule would not ban sales of used cars, and it wouldn’t force the state’s residents to stop driving the roughly 29 million gas-powered cars that are already on the road. Californians also could keep importing new or used vehicles from out of state.

That means Californians will still own a lot of gas-powered cars past 2035, softening the blow for car mechanics and industries dependent on fossil fuels, said James Sallee, an economist and research associate at the Energy Institute at University of California, Berkeley’s Haas School of Business.

“It’s when there’s quick and rapid changes that we think the most harm is done to workers because they can’t relocate freely and quickly,” Sallee said. “So it’s important people have in perspective that it is a slow-moving process, not a dramatic and super-fast shift away from demand for gasoline stations or oil changes. It’s going to be something that takes place over a longer time period.”

Electric cars have fewer fluids, such as engine oil, and fewer moving parts than a conventional car. Brake systems also last longer because of regenerative braking, which converts energy from the brake pads into electricity to recharge the battery, according to the U.S. Department of Energy. They also don’t have mufflers, radiators and exhaust systems.

But auto mechanics warned that while most operating and maintenance costs are lower for electric vehicles, some parts can be more expensive to replace. Rojas also said electric car owners could experience problems down the line they haven’t yet thought about.

Electric vehicles tend to weigh more than conventional cars, which means they need special tires that can support a heavier load. Those can cost between $200 and $300 per tire, compared to the $50 to $150 average for a gas-powered car, Rojas said.

In addition, other services like replacing a windshield on a car like a Tesla, which has sensors and computerized features, could cost anywhere from $1,100 to $2,000, he said, compared to $200 and $500 for the windshield of a conventional car.

“Because the car is still under warranty from the dealership, nothing right now comes out of pocket,” said Rojas. “But as soon as the vehicle becomes older, they’re going to become more expensive.”

While zero-emission vehicle sales have been steadily increasing in recent years, Californians continue to primarily drive gas-powered cars. Electric cars in 2021 made up about 3% of all cars on the road but 12.4% of auto sales.

Some mechanics doubt that consumer behavior can change as quickly as the air board thinks it will. The proposal would require a massive overhaul of new charging stations and building codes.

“It’s nearly impossible to make all these changes by 2035,” Dirige said. “We don’t have the infrastructure to go to all electric vehicles. We barely have it now. And if you ask people, they’re afraid they’re going to end up with a car that is going to run out of electricity and they’ll be stuck somewhere.”

Rojas said mechanics have to invest thousands of dollars of their own money to buy special equipment and tools. Some could use their existing tools and skills to service electric cars, since the cars would still require cosmetic repairs, tire rotations and battery inspections.

But many won’t be able to afford retraining for a new career or learning new skills in complex areas like electrical engineering needed to repair hybrid and electric models.

“If the government is interested in helping us economically to get retrained, it could really help the people who might be struggling but want to learn,” he said. 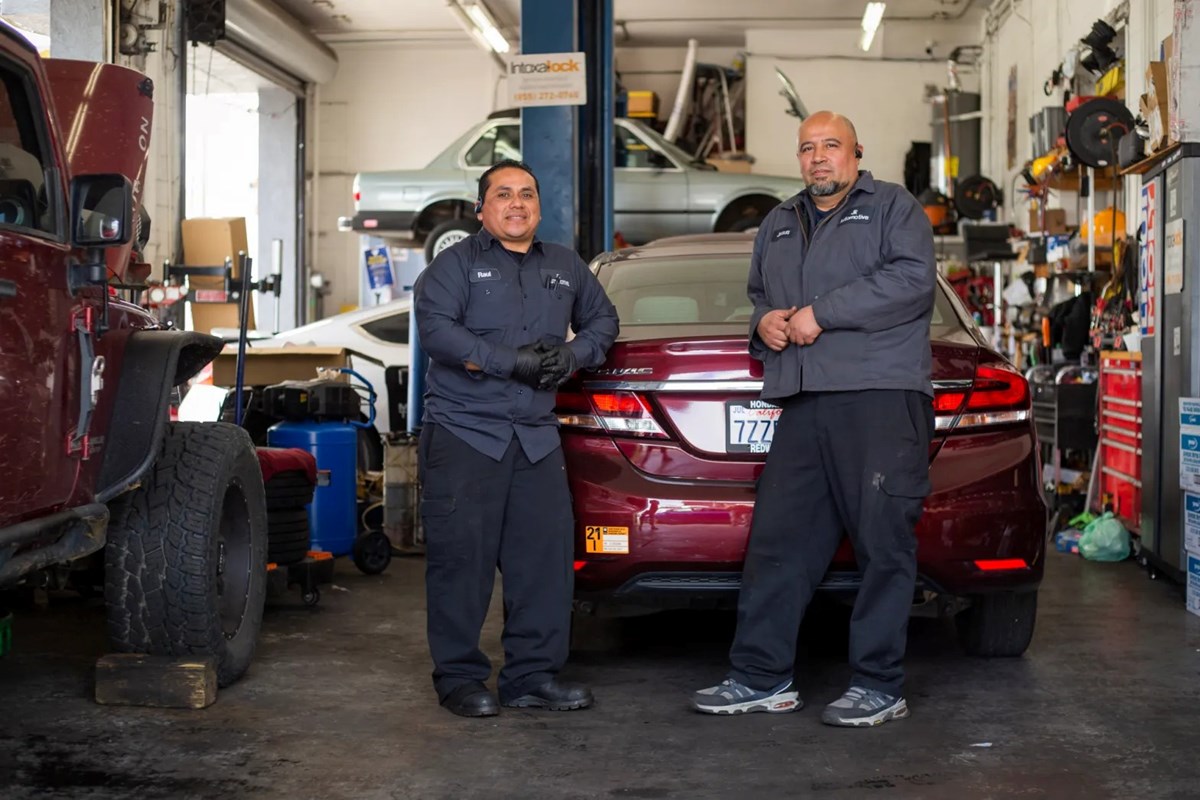 “We need people that are willing to learn because we have to adapt,” said Rojas, right, shown with Raul Man Perez, co-owner of J & R Auto Repair in San Francisco.Nina Riggio for CalMatters

Shane Gusman, a lobbyist for the International Brotherhood of Teamsters, said state leaders should help fund the retraining of workers who lose their jobs due to the state’s efforts to battle climate change.

“Unions are not standing in the way of responsible policies to protect the climate and try to slow down climate change,” he said. “But all of us need to think about the impact on workers. We need to try to come up with policies that protect the workforce, which ultimately protects our economy.”

To reduce job losses from its zero-emission vehicle mandate, the air board in its report says “policy options could be considered for job retraining and transfer support, particularly for lower income individuals.”

State Sen. Josh Becker, a Democrat from San Mateo, agreed. He said the “path of getting to zero needs to foster new well-paying, secure, middle class jobs, and work to transition those from fossil fuels industries.”

“It is true that it is easier to talk about the energy transition when it is not our own jobs that are threatened by it,” he said.

Assemblymember Al Muratsuchi, who chairs the Joint Legislative Committee on Climate Change Policies, introduced AB 1966, which would create a state fund to help retrain and transition workers from the fossil fuel industry to other non-polluting sectors. He said the funds would also offer wage replacement and insurance, pension guarantees, health care options and peer counseling.

The bill, however, would not help auto mechanics.

“We all know that change can be difficult for anyone,” he said. “We need to make the transition to a clean energy economy in a way that doesn’t leave anyone behind.”

The Governor’s Office of Planning and Research is also developing a “just transition” roadmap to guide state policies.

For now, Rojas said he’s focused on the day-to-day operations of his business. The shop is busy, servicing about 40 to 50 cars a week, and Rojas and his team are seeing more hybrid vehicles. He said he supports the state’s plan, and hopes other workers in his industry will also get on board.

“This industry, it’s always changing,” Rojas said. “But a lot of mechanics, they don’t want to change, they just want to do what they’re good at and that’s a problem. We need people that are willing to learn because we have to adapt.”