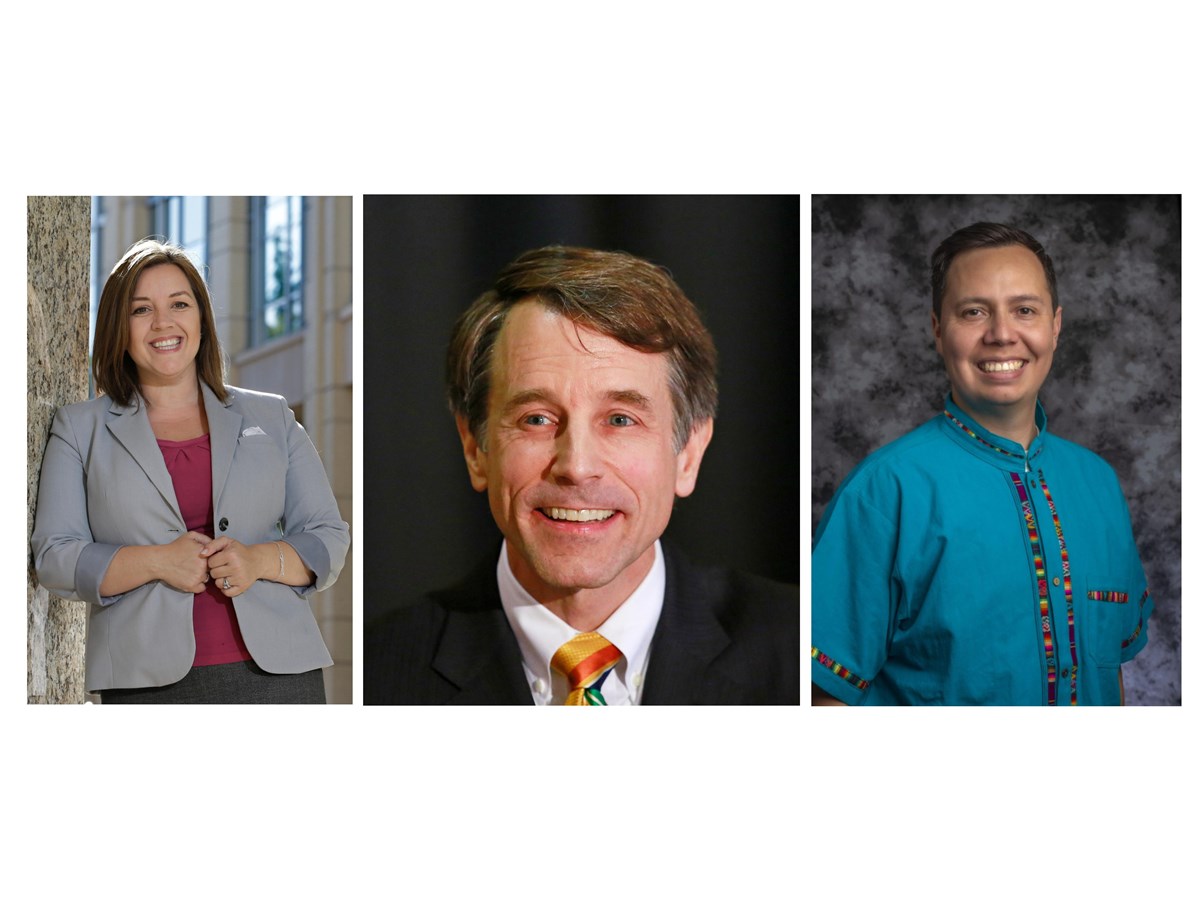 State Senate District 8 will be one of the most closely watched races in the Sacramento region this year.

The district includes the city of Sacramento and its surrounding neighborhoods, stretching north to Elverta and south to Elk Grove.

It covers roughly the same area as current Senate District 6, which was renamed Senate District 8 during the recent redistricting process. The process happens every 10 years.

The seat will be vacated by Dr. Richard Pan, who entered office in 2010 and will reach the Legislature’s 12-year term limit this year. Pan leaves behind a legacy of championing public health initiatives and taking the lead on vaccine legislation — before and during the pandemic.

Three candidates jockeying to replace him qualified for the ballot:

These are the only candidates who qualified for the primary ballot. California’s “top two” primary election system means the two candidates with the most votes will face off in the November general election — regardless of their party affiliation.

We asked the three candidates a series of questions on some of the most pressing issues facing Californians today.

The following answers have been edited for clarity and brevity.

On what would you do to get more unhoused people into stable, healthy living circumstances

Angelique Ashby: Ashby points to Gov. Gavin Newsom’s Project Homekey as an area of success in the state’s response on homelessness. The initiative, launched during the pandemic, turns hotels and motels into housing for homeless individuals. The program offers wraparound services, with the goal of moving people into permanent housing. Ashby secured a grant through the program last year, allowing the city to purchase a Staybridge Suites hotel in her district. The building is being converted into 110 units for homeless families.

Ashby said the state falls short when it only provides housing without wraparound services.

“If we want to be successful in helping people, we need to really address some of the underlying issues around addiction or domestic violence or mental health or trauma,” she said.

If elected senator, Ashby said she would focus on mandating better partnerships between cities and counties when tackling homelessness. City and county governments pull different levers when it comes to housing and shelter production, mental health services and children’s welfare.

“All of those things have to be working in concert,” she said. “And right now, they're not.”

Dave Jones: Jones believes the city and county of Sacramento have failed to provide adequate shelter and housing options for the region’s homeless population.

He argues that it’s time for the state to step in.

“One thing the state can do is lean in and insist that cities and counties build enough shelters, tiny homes, manufactured housing and affordable housing to meet the need,” he said.

Jones said he plans to introduce legislation to expand these housing options and provide more funding for wraparound services, which he calls “critically important for things like substance abuse disorder treatment and mental health treatment.”

Rafa Garcia: Garcia commended leadership in Sacramento for their efforts to address homelessness, but identified areas that need improvement.

“One of the things that is still lacking is the long-term funding for wraparound services,” he said.

Garcia said people in need of mental health services — even ones with health insurance — are waiting six to eight weeks to get treatment.

“If you're about to [have] a crisis, eight weeks is too long,” he said.

He added that improved tenant protections, job training and substance abuse treatment are all important pieces too.

Angelique Ashby: Asby said offering a diversity of options — including high-density housing like duplexes and quadplexes — is key to addressing the state’s crisis.

Ashby said it was a mistake for the state to eliminate its redevelopment program, which helped funnel money into low-income housing production.

Dave Jones: “I'm very concerned about my kids’ ability to afford a home,” said Jones. “I think a lot of people that live in this area are very, very worried about the ability of their kids to find a home.”

“We're about 3 million housing units short in California, and we've made it very, very difficult to build housing in general,” he said. “One of the things that I'm committed to doing is to work to make sure that we change our laws, to make it easier to build.”

Rafa Garcia: “One of the things that we could start doing is having more mixed-use buildings, which would include both commercial and housing, and also mixed-income,” Garcia said. “Those have produced some of the best outcomes.”

Garcia noted that mixed use buildings mean occupants are less likely to live in food deserts, and there’s less reliance on vehicles transportation.

“You can walk to places. Walking is physical activity, it improves mental health [and] you may have more access to urban space.”

Angelique Ashby: “I am married to an emergency room nurse, so I know very well that it is not behind us,” Ashby said, noting that COVID-19 patients are still ending up in hospital beds.

One of the biggest challenges moving forward will be getting kids back on track in school, Ashby said. She argues this demands more funding for libraries and after school programs.

“We're going to have to invest in the social and emotional well-being of children and families,” she said. “This is going to weigh on our kids and it's going to take us a while to catch up.”

She added that the state must continue to invest in closing the digital divide, supporting seniors and keeping small businesses open as the pandemic enters its third year.

Dave Jones: “We need to look at how we can help the communities most impacted by COVID,” Jones said, with “communities of color and women being chief among them.”

Jones said we also need to start preparing for the next pandemic by creating emergency stockpiles and putting more money into public health.

“The state has underinvested in public health,” he said. “We need to pass laws that give public health officers autonomy so they can make decisions based on science and the medical facts, not based on the political whim or leanings of their board of supervisors.”

Rafa Garcia: Garcia said the state needs to make sure it’s better prepared for the next pandemic to hit.

“When we ran out of PPE, and employees were demanding PPE, employers couldn't provide,” he said. “And so more people — especially people that are working in hospitals, ERs — they were being exposed.”

Garcia said he’s also concerned about students who have been out of the classroom for much of the last two years. He anticipates students will face mental health struggles as a result.

“We need to make sure we have those services for the students,” he said.

Angelique Ashby: “We know that greenhouse gas emissions come primarily from transportation.” Ashby said. “I'm a big advocate of multimodal transportation projects. We need to continue to fund those.”

Ashby sees electric vehicles as part of a multimodal system, and said the state needs to be aggressive about its EV goals by assisting car buyers.

“Not all families can afford electric vehicles, but state subsidies and local incentives and rebate programs can certainly help,” she said. “Those programs were definitely a big part of my family's decision to purchase an electric vehicle.”

With wildfires growing more extreme due in part to climate change, Ashby said the state needs to boost its forest management and support home hardening in rural communities.

“We've got our hands full on this one.”

Dave Jones: At the top of Jones’ list is accelerating the transition away from greenhouse gas emitting industries.

“We need to do that across all sectors,” he said. “That means more wind, more solar, more geothermal and less reliance on fossil fuels for energy production.”

He wants to see more electric vehicles on the road — for personal and commercial use — and expand charging infrastructure.

As senator, Jones said he would “increase the amount of state investment in resilient infrastructure, in a nature-based approach, to reducing the risk of climate-driven perils, whether it's wildfire, sea level rise, flooding [or] urban heat, islands.”

He gave the example of using prescribed burning and vegetation thinning as a forest management technique that helps mitigate wildfires.

He noted that Sacramento is especially vulnerable to the impacts of these threats, and specifically disadvantaged populations.

“You're talking about some of the most vulnerable communities,” he said.

Each of these threats could exacerbate other inequities, creating a ripple effect. He noted the lack of health coverage for some Californians as an example.

Garcia added that the state should set an earlier target for its carbon reduction goals.

Angelique Ashby: Ashby ticked off a list of police reforms she helped spearhead as a Sacramento City Council member, such as mandating police body cameras for the Sacramento Police Department, banning no-knock warrants and supporting the “8 Can’t Wait” platform.

“I think part of why I've been so effective in this area is because I have worked from a non-adversarial position,” Ashby said. “I've managed to convince the Sacramento Police Department and their union to support these efforts.”

Ashby also recognized that crime is a mounting concern among some voters, and that “they're worried about not having enough police officers.”

Asby said the focus should be on community-oriented policing — ”so that we're not creating an environment that breeds further distrust between the community and law enforcement.”

Dave Jones: Jones said he has supported recent laws passed by the Legislature to hold officers accountable for misconduct and reform the legal standard for justifiable use of force.

“I'm not taking funding from any law enforcement organizations in order to send a clear signal about my support for reform in this area,” he said of his campaign donations.

“But at the same time, I don't support defunding the police,” Jones added. “And I do think that we need to continue to make investments in public safety, in making sure that as we see increases in violent and property crimes, we have sufficient resources to address that.”

He added that he supports deploying trained clinicians to help respond to people having mental health or substance abuse crises, instead of armed officers.

Rafa Garcia: Garcia said there are short-term and long-term needs in response to these issues. Accountability for police misconduct is something that needs to be addressed as it happens, he said. Investing in youth programs is a long term example.

“We need to make sure our communities are coming together and that they have the services that are needed, whether it's an after school program, whether it's more sports,” he said.

Correction: A previous version of the audio for this story incorrectly stated where Dave Jones previously served in the California Legislature. He only served in the Assembly.