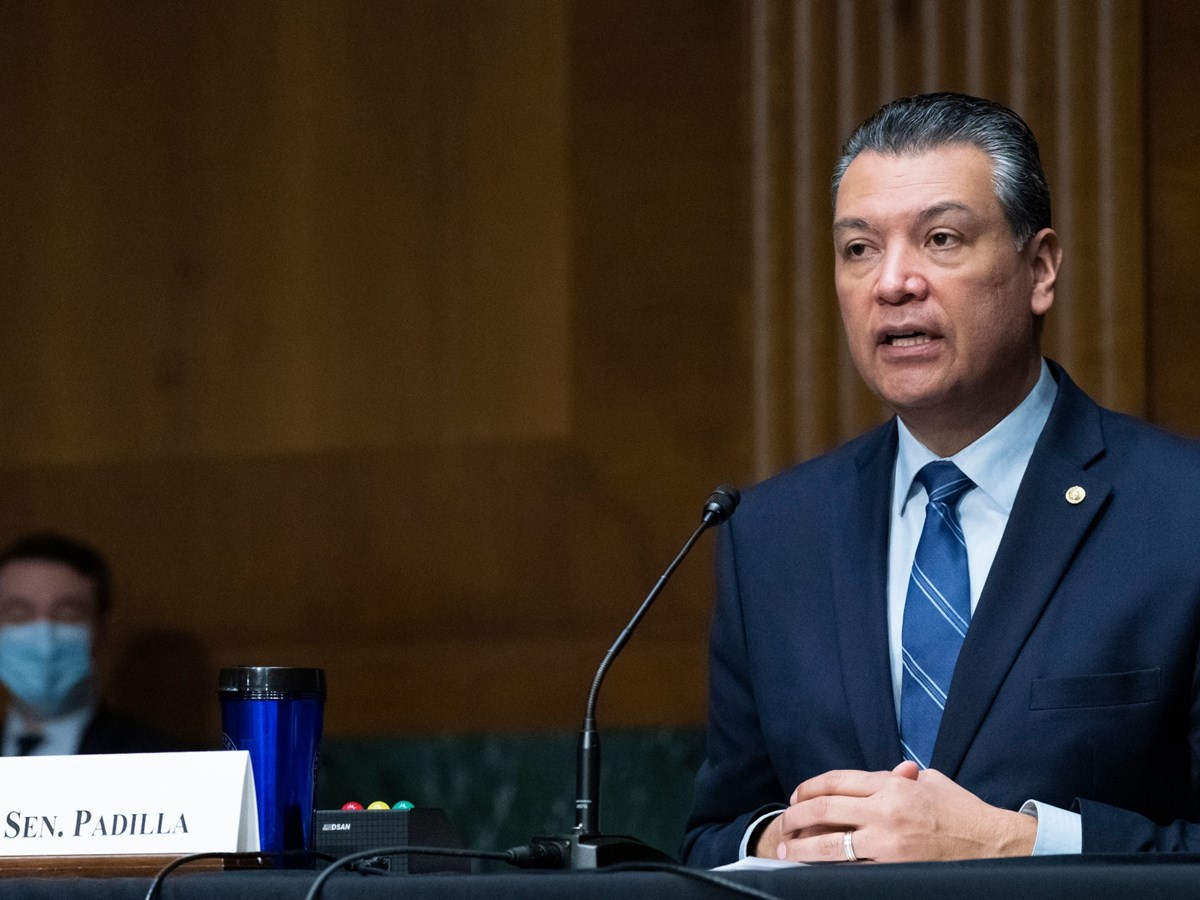 In this March 16, 2021, file photo, Sen. Alex Padilla, D-Calif., speaks during a hearing of the Senate Health, Education, Labor and Pensions Committee on Capitol Hill, in Washington.

Once ballots for the June primary election arrive in the mail, California voters might do a double-take when they find two races with Senator Alex Padilla.

The separate but related U.S. Senate contests are asking voters to allow Padilla to finish one truncated Senate term and then begin a new one.

Californians elected Harris to the senate in 2016, a six-year term that runs through January 2023. But a law signed by Newsom last year prevents Padilla from finishing Harris’ term as an appointed senator.

Instead, he must compete with a slew of other candidates for both the partial term and for a new six-year stint.

Voting experts say there’s nothing wrong with the ballot. It’s just a strange set of circumstances that California voters will be called upon to sort out — both in the June primary and again this fall in the November general election.

“It definitely could be the kind of thing that leads to misinformation and disinformation because it’s unusual and confusing,” said Kim Alexander, president of the California Voter Foundation, which advocates for voter rights. “I think everybody involved in voter education is going to have to make an extra effort to make sure that voters understand that this is happening and that this isn’t a mistake.”

Voters can select the same or different candidates in each contest. The ultimate winner of the partial term contest will serve as senator through Jan. 3, 2023. The victor in the full-term race will serve from Jan. 3, 2023 through January 2029.

But why is this happening?

Lawmakers cited two federal court rulings in cases involving the appointment of senators in Illinois and Arizona, the Los Angeles Times reported last fall. Each suggested California’s practice could be found illegal under the 17th Amendment to the U.S. Constitution, the Times added.

“Courts have said if you’re going to have an election, you can’t just have [an appointed official] occupy the seat forever,” Wesley Hussey, a political science professor at Sacramento State University, told CapRadio. “There has to be a chance for voters to approve or not approve them.”

That concern led to Assembly Bill 1495, which Newsom signed last fall months after appointing Padilla. The bill was authored by Assembly member Marc Berman (D–Palo Alto) and ensures that voters decide whether an official who is appointed to a U.S. Senate seat should serve out the remainder of a term.

Experts say the new law aligns California with the 17th Amendment and should shield it from legal threats.

Padilla plans to speak directly with voters about the upcoming election and spread the word about the unusual circumstances in media interviews, via social media and paid media, according to a written statement from his office. He recently addressed the issue on Twitter.

“Remember: early voting starts for the CA primary on May 9th, less than two weeks from now,” Padilla wrote. “My name will be on the ballot two times, which means you have given me twice the reasons to earn your vote and continue delivering results for the people of California.”

It could be déjà vu all over again for voters in November, because California’s primary system guarantees the top two vote-getters advance to the general election regardless of party affiliation.

Even if Padilla or another candidate gets more than 50% of the vote in either or both of the senate contests, they still must compete in a November runoff, according to Kim Nalder, a political science professor at Sacramento State.

The double dose of election confusion could have been avoided had Newsom immediately called a special election to fill Harris’ seat. But Nadler said that would have been costly and likely led to low voter turnout.

Padilla is not facing any high-profile challengers in the two contests. Still, given the divisive state of politics, Nalder surmised that Democrats didn’t want to take any chances that his future in the Senate could hit a snag.

“If there’s a chance to make life difficult for a member of the other party, someone might do that,” she said of a possible legal challenge to the state’s appointment process. “So California wanted to make sure that we don’t have that problem and that things were kind of buttoned-up in terms of how we replace a senator who leaves for a different position.”

On ballots in Sacramento County, voters will find the full-term contest first, followed by the partial-term race below, according to County Registrar Courtney Bailey-Kanelos.

All active, registered voters in California will receive a mail ballot for the June primary election starting the week of May 9.