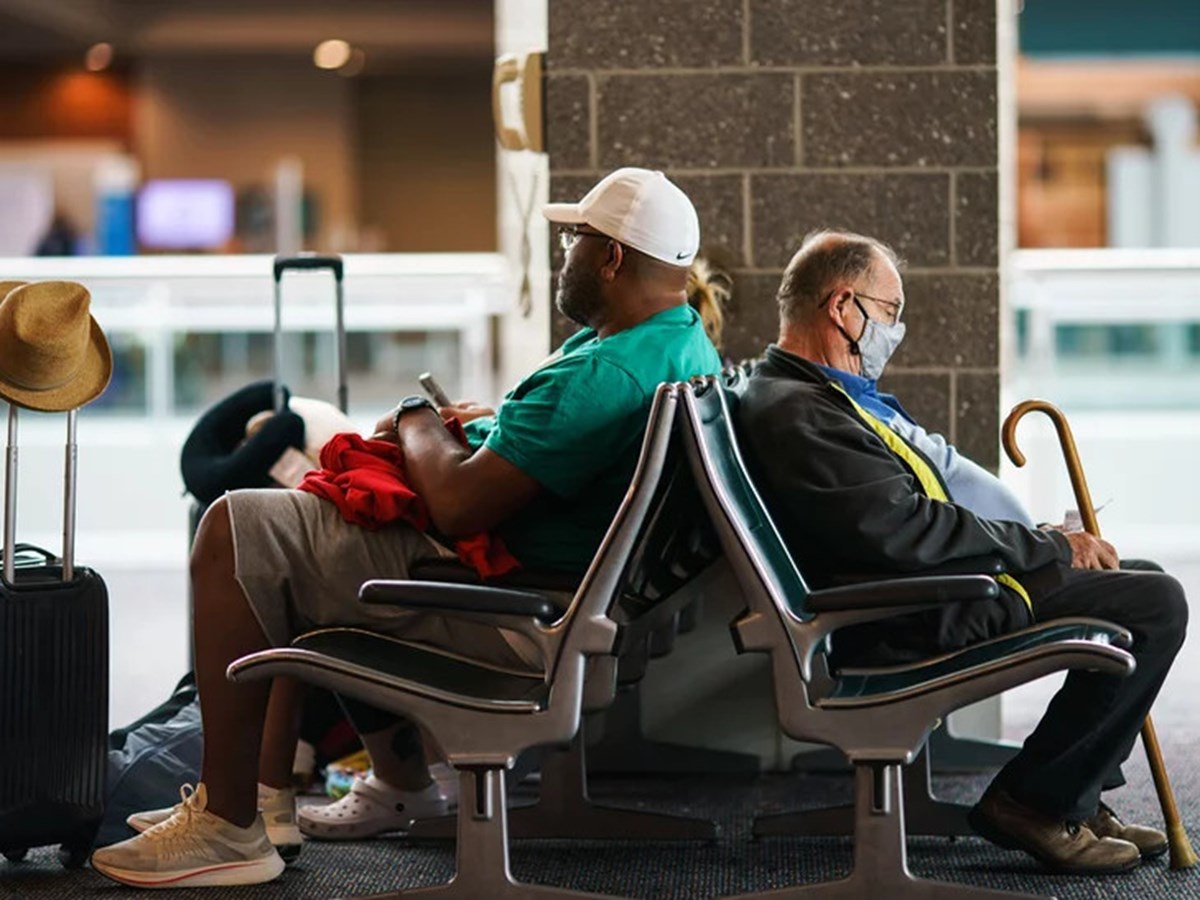 Travelers sit in a waiting area at Rhode Island T.F. Green International Airport in Providence, R.I., Tuesday, April 19, 2022. A federal judge's decision to strike down the federal mask mandate has left travelers to assess the risks of public transit

Just how likely are you to pick up a case of COVID-19 on that upcoming flight, bus commute or train ride?

This is what many Americans are trying to gauge after a Florida judge's ruling halted the federal requirement to wear a mask on most forms of public transit.

The Biden administration is appealing the court's decision, but for now masking has become entirely optional for U.S. travelers – leaving them to decide how risky travel is for themselves.

"This was a legal decision — not a scientific decision," says Joshua Santarpia, a microbiologist at the University of Nebraska Medical Center who studies aerosol transmission of disease. "People should not take this as a sign that something has magically changed overnight."

Infectious disease experts tell NPR they generally plan to keep covering their faces regardless of what the rules are. It's not as though all public transit poses the same risk, though. Scientists say certain forms of transportation are more worrisome than others, and different legs of a journey can also present different risks.

"It's very important to distinguish travel as a continuum," says Dr. David Freedman, president-elect of the American Society of Tropical Medicine and Hygiene.

Wherever you go, pay attention to how many passengers there are, how close together they are, and how well the air is moving through the space. Understanding these differences can guide your own personal decisions about what risks you can and cannot afford to take.

Airplanes can be safe spaces, but there's a catch

It may seem counterintuitive, but flying in a small, enclosed metal tube can actually be safer from a COVID standpoint than many other indoor activities like eating in restaurants, or going to stores.

"It's considerably better than those spaces," says Santarpia. In fact, the air gets exchanged every few minutes in airplane cabins like those of the Boeing 767s and 777s — even putting them ahead of the standards for operating rooms. 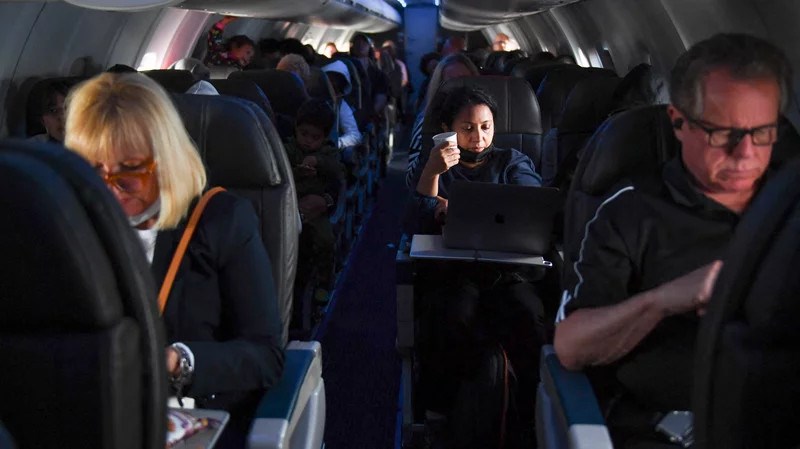 If a passenger is infected with the coronavirus and not wearing a mask, people sitting within two to three rows of them are at higher risk of infection.PATRICK T. FALLON/Patrick T. Fallon/AFP via Getty Images

This means that tiny respiratory particles, or aerosols, that can carry the virus get sucked away quite quickly. Santarpia has actually studied this by sampling air while a plane is in flight.

"The particles are not dispersed widely in the cabin, so your exposure level to people, even in your immediate area by aerosols alone, is not particularly high," he says.

This finding is supported by other research, including a review of the evidence undertaken by Canada's health agency and updated in November 2021, which concluded that "the risk of infection during a flight is low."

Freedman, who also reviewed the evidence of in-flight transmission in late 2020, says major outbreaks are "relatively uncommon" and that they tended to happen on the flights without masking requirements.

"The number of flights with larger outbreaks did seem to go down once there was universal masking," says Freedman; however, he notes it's hard to truly quantify the risk because these studies are challenging to do.

Still, this lines up with an assessment by Harvard researchers that also found, when people wear masks, flying can be safer than going to the grocery store.

Air travel would be fairly safe if passengers were magically transported into their seats mid-flight, wore a well-fitted mask and stayed put during the entire flight.

Of course, we all know this is a fantasy.

"It's not just the airplane — airports are a nightmare," says Freedman. "Airports have done very little to change any of their procedures at all."

There are innumerable opportunities to catch the virus while hauling your luggage from the curb through security and onto the plane, among a crowd of other travelers.

And even once you're onboard, the risk can be higher while the plane is taxiing or sitting on the runway, because the ventilation systems may not be fully running, says Freedman.

Boeing says its guidance to airlines is to keep the air flow system turned on with HEPA filters and air circulating at all times while passengers are on board, but several experts have pointed out this doesn't always happen.

Even on the flight, you can still be at risk if you're seated close to someone who's infected and unmasked. Research generally shows that people seated within two to three rows from an infected person are at the highest risk of catching the virus, says Freedman. But even people seated farther away can be infected according to some studies.

Given all of this, Santarpia recommends continuing to wear a high-quality respirator, like an N95 or K95, when flying and while in the airport.

Even if cases are generally low where you live, air travel could expose you to people from other regions where more virus might be circulating. And remember: the longer the flight, the greater the risk.

Buses and subways: Risk for you and those around you

But even that isn't enough to prevent transmission in a situation where riders are packed tightly together in each other's faces. 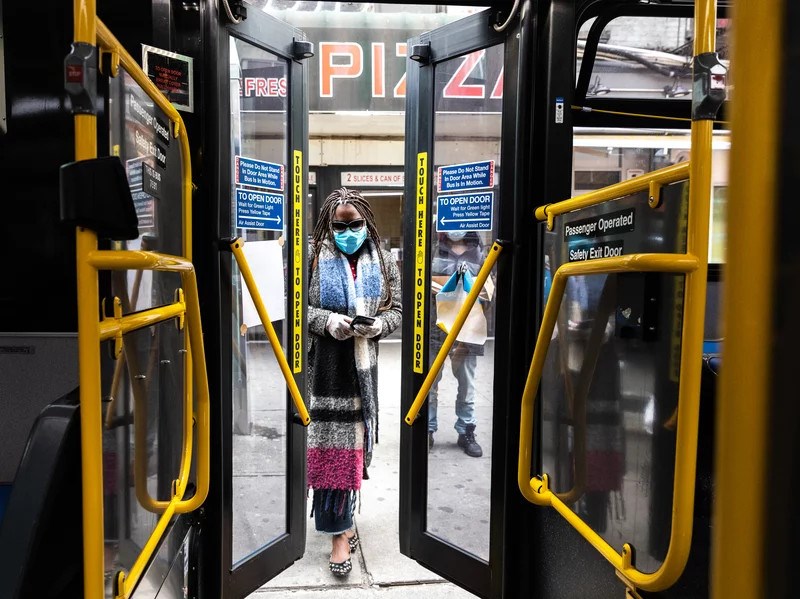 Marr says if a subway car is crowded, she's keeping her mask on. But if there's "fewer than 10 people on a train, I probably wouldn't."

Several experts said ventilation is more of a concern on city buses, where "you're really breathing in what almost everyone else is breathing out," says Jesse Capecelatro, an assistant professor of mechanical and aerospace engineering at the University of Michigan who studies the flow physics of particles and droplets.

Capecelatro has researched how air flow affects disease transmission on urban buses. "What we found was if the windows are closed, due to the recirculation of the air in the bus, whatever someone breathes out, in about 45 seconds, everyone in the bus is breathing in a portion of that," he says.

He and his colleagues published models, using data from earlier in the pandemic, that showed when everyone on a bus is wearing a high-quality mask – assuming they're wearing it without big gaps around the nose and mouth – that dramatically reduces transmission risks. If no one was wearing a mask, and there was a highly contagious person on board, the modelling found that under certain conditions, about half the passengers on the bus could potentially get infected within 15 minutes.

He says opening windows on a bus can make a big difference, but that's not always possible.

The fact that buses tend to have less ventilation than other means of public transportation raises real equity concerns, says Neil Sehgal, an assistant professor of health policy at the University of Maryland School of Public Health.

Seghal says the end of mask mandates on buses means that people with fewer options for safer travel are now facing increased risk – including people who are medically vulnerable. For instance, people with cancer might need to ride a bus to their chemotherapy or oncology appointments.

"We've increased the level of risk for these people without consideration that their risk tolerance may not be the same as ours," he says.

Cabs and ride-sharing: Get some air in there

If you've ever been in a passenger car with a smoker, you know that the cabin will quickly fill up with smoke when the windows are up. (Some people call this hotboxing, with cigarettes and ahem, other substances.) Infectious aerosols behave like smoke, so in an enclosed car, they're also going to build up quickly.

When you consider the fact that ride-share drivers are picking up different passengers all day long, it's hard to predict what kinds of viral particles you might be breathing. 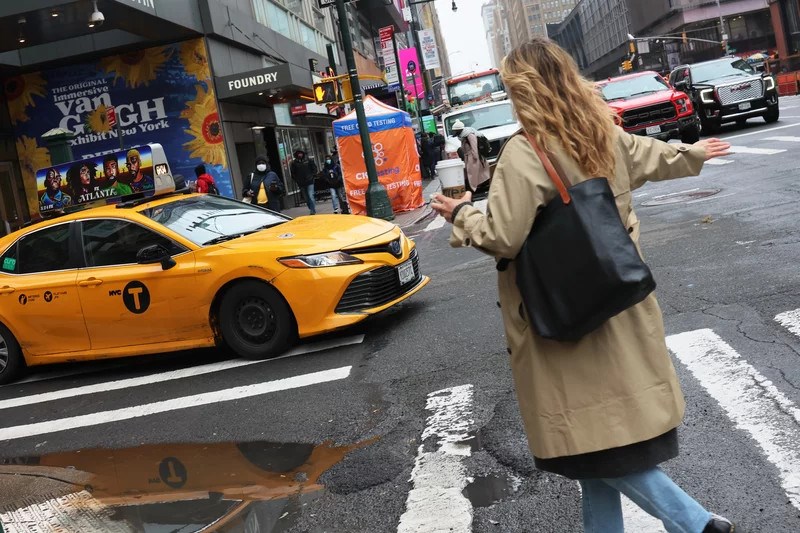 Taxis and ride-sharing vehicles can be risky, given that you're sitting in close quarters with the driver and you don't know who else breathed in the space moments before.Michael M. Santiago/Getty Images

So if you're in a cab or ride-sharing vehicle, research has found that your best bet to is to open the windows all the way to clear the air and lower your risk of transmission. If you're cruising along at a good clip, "partially open windows also do a lot more than you might think," says Varghese Mathai, an assistant professor of physics at the University of Massachusetts, Amherst, who has studied aerosol transmission in passenger car cabins.

His research has found that when you're stuck in traffic, in addition to opening windows, turning the AC on at full blast will allow for more air circulation.

And remember, shorter rides are better. "The longer the time you spend [in the car], the more aerosols you risk inhaling," Mathai notes.

Mathai says his research was inspired in part by his own use of ride-sharing services, and he plans to keep on masking.