Advocates are pushing for a health equity and racial justice fund in California. Here’s what it would do. 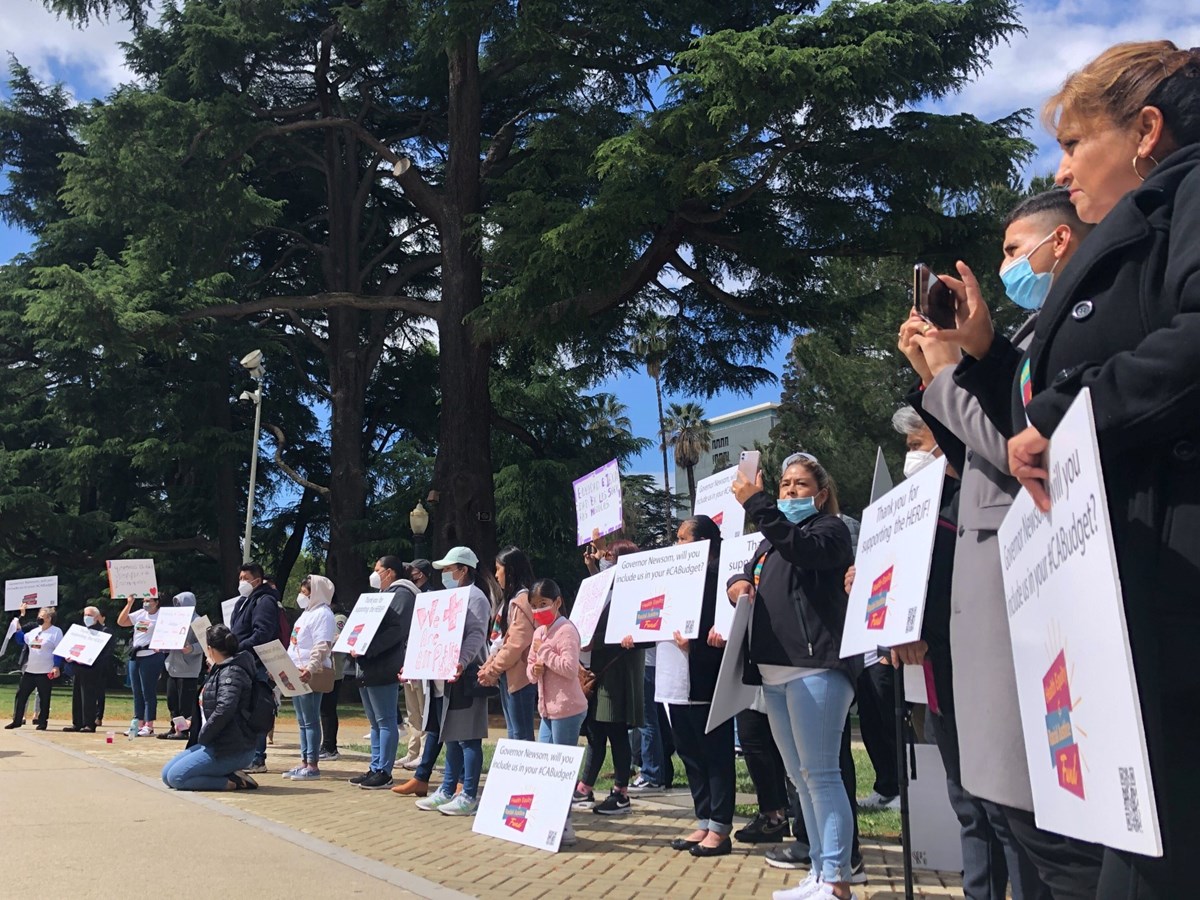 A crowd of dozens stood outside the Capitol Friday morning, calling on California Gov. Gavin Newsom to add a $100 million Health Equity and Racial Justice Fund to his 2022-23 budget.

The crowd echoed her back: “The people united advance without parties.”

Islas founded the organization Cultiva La Salud, which is part of a coalition of 25 legislators, 11 co-sponsors and almost 200 organizations asking Gov. Gavin Newsom set aside at least $100 million in ongoing funding in his upcoming budget proposal for the Health Equity and Racial Justice Fund.

“Even before COVID, we were seeing a really deep inequity in terms of health outcomes,” she said. “This fund is our chance to begin to stop that and to begin to promote better health for us all.”

The fund, which had gained some traction in 2021 but was ultimately not included in the state budget, would be used as a source for grants to tribes and community-based organizations addressing public health, from supporting transportation solutions to preventing gun violence — part of what advocates say are social determinants of health.

People of color, particularly those who are low-income, English-language learners, undocumented or LGBTQ+, tend to have negative social determinants of health.

The idea for the fund was a collaborative effort that began in 2020, according to Ronald Coleman, the managing director of policy for the California Pan-Ethnic Health Network.

Coleman said CPEHN and other partners, including the California Black Women’s Health Project, Roots Community Clinic and California Latinas for Reproductive Justice, wanted to establish a fund that would provide grants to organizations working on racial justice projects at the local level.

“For communities who have been historically excluded because of differences in income, we know those are tied to differences in education, which we often know are tied to race, both of which contribute to the type of job that a person can ultimately get,” Coleman said. And jobs are tied to health insurance, he added.

Assemblymember Dr. Joaquin Arambula (D–Fresno) says establishing the fund would acknowledge communities of color and low-income communities were the hardest hit by COVID-19, while also providing support for the organizations directly supporting them.

It could be particularly helpful for Central Valley organizations, like Cultiva La Salud, which works to advance health equity in the eight-county San Joaquin Valley and is a part of the COVID Equity Project’s Immigrant Refugee Coalition. The local group worked with Arambula’s office and the Leadership Counsel for Justice and Accountability to hold over a dozen vaccine clinics last year for people living in rural Central Valley communities like Biola and Lenare.

“Areas like the central San Joaquin Valley received roughly half the number of vaccines that other areas of our state, because of the total number of providers we have,” Arambula said. “For us to be able to play catch up and to address some of the inequities that came with that initial distribution of vaccines, we had to work very closely with our CBOs [community-based organizations] to bring community out.”

While grants to community-based organizations are often centered around meeting certain goals, Islas with Cultiva La Salud said the HERJ Fund would allow organizations to support the efforts they already know work for their community.

But the funds need to be ongoing, Islas added.

“We need multiple years of funding to really help to combat the systemic, embedded institutionalized challenges that our communities are facing,” she said.

Some of those challenges were evident when vaccines began rolling out, like technology and transportation barriers.

“There was this idea that somehow they would miraculously go to myturn.com and sign up for a vaccine,” she said of the elders in the Spanish-speaking communities in the San Joaquin Valley. Islas punctuated the question with a disbelieving laugh: “Crazy.”

Cultiva La Salud helped walk people through signing up for vaccinations and rolled out its Save Our Señoras program. The program helped deliver food, personal hygiene products and personal protective equipment to over 200 elderly Latina immigrants — prioritizing undocumented women — to address not only transportation barriers but the increased COVID-19 risk for those 65 and older.

While advocates unsuccessfully pushed for the fund to be included in the 2021-2022 budget, Coleman hopes this year — without the threat of recall looming over California Governor Gavin Newsom — their advocacy could prove more fruitful.

“It was people of color that ultimately supported him [Newsom] strongly and kept him in office,” Coleman said. Over 78% of Latino voters across California voted to keep Newsom in office during the 2021 recall. “We think it will be imperative for the governor to start paying attention to the communities that support him.”

Newsom will release his updated budget proposal in May, but the state’s final budget for 2022-23 won’t be official until the summer. If the fund is included, Coleman says their goal is to begin awarding grants in fall.

Correction: A previous version of this story misidentified the California Black Women’s Health Project. It has been corrected.