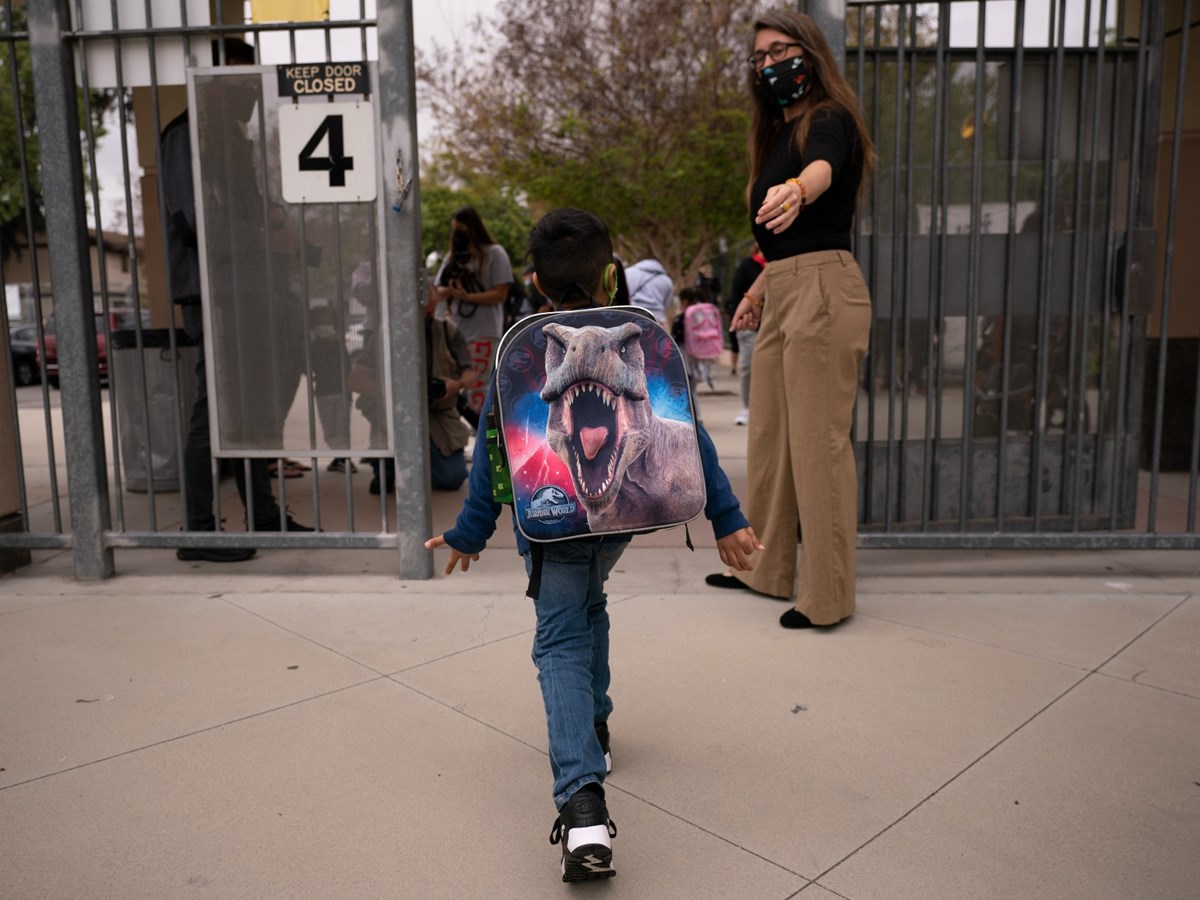 In a major shift for early education, California is expanding its transitional kindergarten program to eventually include all 4-year-olds. While most districts will receive additional dollars for the expansion, 15% will not — and are facing tough budget choices as they comply with the new fall mandate.

Some of those districts — among the most affluent in California — say they are stretching existing budgets to create classrooms, moving money around to hire new teachers and trying to figure out how to fund renovations that include tiny toilets and preschool playground equipment.

Others say they have no plans to add transitional kindergarten, despite parent pleas, unless they get state funding.

Reed Union School District in the Bay Area town of Tiburon is one of the districts that won’t be getting state money for transitional kindergarten. Reed Union hasn’t offered the program in years but is planning to add it in the fall.

“For districts without any additional funding coming in it is a big financial commitment,” said Superintendent Kimberly McGrath. “It is fantastic for kids in our community to have an additional year of exceptional learning. We are going to embrace it and see it as working toward universal preschool.”

Reed Union is one of the 15% of districts statewide   known as basic aid districts.

Most California districts are funded through a state funding formula allocated on a per-student basis. But basic aid districts serve areas where local property taxes generate more money than the districts would receive if they took state funding.

Last year, the state committed more than $1 billion in the current budget to begin phasing in the expansion of transitional kindergarten, eventually including all 4-year-olds by 2025-26. None of that money will go to basic aid districts.

“I can see why basic aid districts might make an argument that the state has changed the rules substantially,” said Deborah Stipek, a professor at the Stanford Graduate School of Education. “But I don’t know how you’d address it. They can’t have it both ways.”

Last year’s decision to expand the program to all 4-year-olds means 500,000 children will be eligible by the end of the rollout. Starting this August, children who turn 5 between Sept. 2 and Feb. 2 will be able to enroll. Each school year the enrollment window will widen to include more students until 2025-26, when all 4-year-olds will be eligible.

At least a dozen basic aid districts have not offered transitional kindergarten in recent years and some of them say they still won’t add the new grade despite the mandate.

“We do not plan to offer it because we are not receiving any funding from the state,” said Chris Delehanty, assistant superintendent of business services for Del Mar Elementary School District. “To add it would mean reducing or eliminating something we are already offering, increasing class size or reducing STEAM (science, technology, engineering, arts and math) offerings for our students or professional learning for our teachers.”

The district has eight elementary schools and serves nearly 4,000 students. Delehanty said if the district enrolled as many 4-year-olds as it does kindergartners each year, about 500, the district would have to add around 25 classrooms and hire twice that number of teachers and aides to meet state-required teacher-student ratios, which are generally smaller than those for older students. The estimated price: $4 million to roll out the program to all 4-year-olds.

Transitional kindergarten, like kindergarten, is optional and experts say not all children who are eligible will enroll. Families may choose to stay in their subsidized or private preschool or child care or keep their kids at home.

There are four other small coastal districts in San Diego County that are basic aid districts and also do not offer the program, including Solana Beach, Encinitas Union, Rancho Santa Fe and Cardiff school districts.

“We have all been advocating and lobbying for this mandate to be funded for all children,” said Andrée Grey, superintendent of Encinitas Union School District. “We recognize the value and appreciate the intent behind universal transitional kindergarten. However, it is critical that community-funded districts be able to access the funding that has been set aside, and there is not currently a mechanism for us to do that.”

But Stipek, the Stanford professor, said schools often have to reassess spending based on enrollment, policies, shifting focus and existing and new programs.

“Anytime you have to do something new, you have to do a redistribution of resources,” Stipek said. With transitional kindergarten, known as TK, she said, “your kids are going to learn more, do better, develop the kind of social skills that they need. So the benefits of having kids in TK will compensate for any reductions you have to make in other kinds of services.”

It’s unclear what happens if districts ignore the mandate. The California Department of Education refused to say whether it can enforce the mandate or how many schools are not providing transitional kindergarten.

Even so, the financing is challenging. They need the state to provide money for the rollout in the coming years, several superintendents said.

Becky Rosales, superintendent of Miller Creek School District, noted in an email  that her district, in San Rafael, receives just enough in property taxes to be classified as basic aid. “I am hopeful that there will be some consideration at the state level of a remedy to support districts like ours.”

At Reed Union in Tiburon, the district, which has just three schools, will add two transitional kindergarten classrooms to serve up to 40 children, McGrath said.

“If funds were provided it would have an enormous impact,” McGrath said. “Even if just some up-front grant funds because while there are some ongoing costs there are a lot of one-time costs – equipment material purchases, planning time, playground equipment, facilities.”

In the midst of Kern County’s oil fields, where McKittrick Elementary School District offers transitional kindergarten when it is needed, said Barry Koerner, who is both superintendent and principal. The district has only one school and 86 students.

“If I didn’t have resources built up we would have to cut,” he said. “We are rarely the ones they consider when making these big changes. We are doing everything we can to fight to keep our heads above water.”

Transitional kindergarten has been a pillar of Gov. Gavin Newsom’s agenda to eventually offer universal preschool to all children in California. The move is intended to benefit children eligible for subsidies who are waitlisted by fully enrolled-preschools or child care programs and those whose families can’t afford hefty tuition for private early childhood programs.

Legislators supported the plan, citing studies that say children do better in school if they attend preschool, and that preparation can help close the achievement gap.

“The evidence for the benefits of preschool, transitional kindergarten is strong enough now that we want all kids to have access to it — and that’s not the case right now,” said Stipek, who is part of a state task force to help the Commision on Teacher Credentialing create guidelines for teachers in early childhood.

There are other reasons supporters push for transitional kindergarten.

In San Diego County, parent Lynette Jaiswal has been carefully tracking the discussion in both Del Mar and Solana Beach, as she owns homes in both places. She lives in Solana Beach but would have moved to her home in Del Mar if the district offered the program.

Last year, when it was time to find a transitional kindergarten program for her son, she said she was told to apply to an outside district. But that didn’t work out for her family because it was too far away.

“I’m not the only parent struggling to find a place for my transitional kindergarten child,” she said. “I did find placement for my child but it’s very frustrating when you have a school district that can do something but they refuse to.”

While many basic aid communities are considered affluent, there are also families in need of low-cost child care and preschool, said Jaiswal, who is a real estate agent. She said within the district there are hundreds of low-income housing units for families that typically rely on public schools. Also, many middle-class families have experienced COVID hardships and could benefit from a free public option for 4-year-olds.

Basic aid school districts, education organizations and some state legislators are advocating for the state to provide dedicated funding for basic aid districts.

Santa Barbara Democratic Sen. Monique Limón, who served on a school board when transitional kindergarten was first created, wrote a letter signed by 22 other legislators asking the Newsom administration to help the districts.

If the state can’t offer funding, then districts may need more time to implement the expansion, she said.