Sacramento city schools’ strike is over, but parents still have a lot on their minds 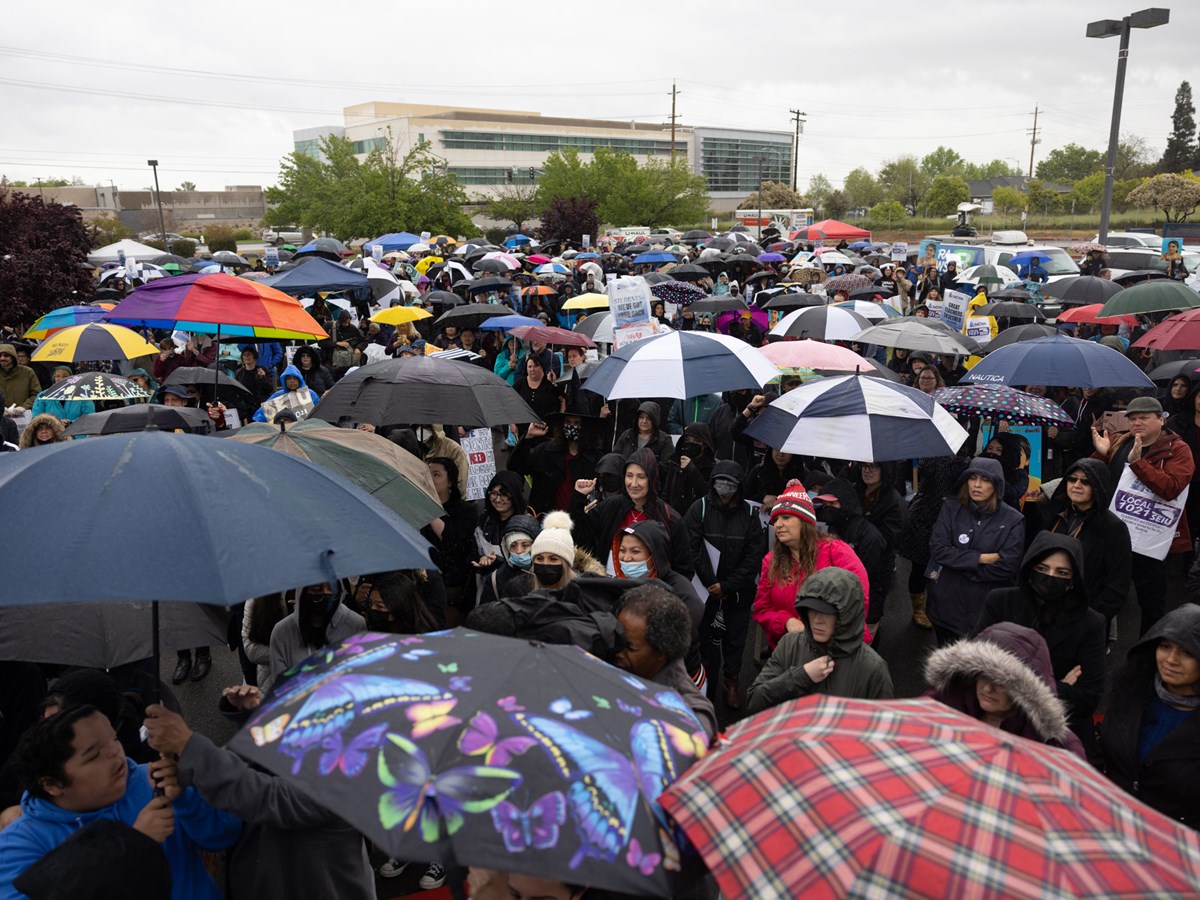 Sacramento City Unified School District staff and supporters listen to Dolores Huerta give a speech in the rain at Rosemont High School, on Monday, March 28, 2022.

For Sacramento City Unified School District students, spring break ends today, but it’ll be their second return-to-school in the past month.

This comes after students’  impromptu leave from classrooms in late March, as a result of the eight-day strike staged by district employees that ended on April 3.

That work stoppage is over now — but parents still have a lot on their minds.

“When we have the next variant, the problem is getting those masks back on the kids,” she said. “Why remove it now, when we only have a couple more months of school left?”

What those couple months of school look like are still to be determined. The district might have to pay California over $40 million in penalties for the eight days of instruction it wasn’t able to give students while schools closed during the strike.

And this is leading to more uncertainty for parents who might need to plan ahead.

The strike is over, but that doesn’t mean stability has arrived

From March 23 to April 1, SCUSD school campuses were closed while the Sacramento City Teachers Union and SEIU Local 1021, which represents the striking employees, met with the district to negotiate. During the strike, a wide swath of workers — teachers, custodians, school nurses and bus drivers among them — clamored for the district to increase compensation to address staffing shortages. They were often joined by community members during daily rallies, and a group of parents also staged a sit-in to apply pressure to the district.

“​​I'm a parent myself of a child in the district,” SCTA president David Fisher, who is also a second-grade teacher, explained last week. “While we understand the anxiety and the inconvenience, the support on the lines with the families, and the parents and the children themselves coming out to support their teachers day-after-day was really inspiring.”

District spokesperson Alexander Goldberg said the district apologized for any challenges that families may have faced during the strike.

“The strike … deeply impacted our families with additional burdens for parents and guardians who are already overwhelmed with day-to-day responsibilities,” he said via email. “We will continue to engage in discussions with staff and families that keep our attention squarely focused on the academic and social and emotional needs of our students.”

Among the provisions of the resulting tentative agreements between the district and teachers and workers are: higher pay and one-time stipends for teachers and staff, recruitment and retention stipends for new bus drivers and the continuation of fully-employer-paid health care through both HealthNet and Kaiser. If ratified, the agreements will last through the 2023-24 school year.

Healthcare was at the forefront of workers’ minds; in initial negotiations, the district wanted to divest from paying for HealthNet, making Kaiser the primary healthcare provider, to help balance its budget.

Forty-three percent of SCTA-represented workers use the HealthNet plan, the district says.

But while parents can send their kids back to reopened campuses, there’s more they need to plan for than just possible future tension between the district and workers — including a lifted indoor mask mandate and a potentially longer school year.

Monday also marks the first day this school year that students and staff at Sacramento City Unified can see each other — unmasked — in classrooms.

The district is moving from requiring masks to “strongly recommending” them indoors, though over 650 parents signed a petition calling for the district to keep the mandate in place, at least through the rest of the school year.

SCUSD is one of the last school districts in the state to lift its mandate; California did so March 11.

There is still a possibility the mandate could return. If the county reaches a “high” community COVID-19 transmission level as defined by the Centers for Disease Control and Prevention, or local public health departments re-institute a mask mandate, the district will follow suit.

Parent Shawnda Westley, whose child attends Caleb Greenwood Elementary, was part of the group spearheading the petition. She’s worried about the disparate vaccination rates at differing schools resulting in more outbreaks once masks come off, especially after spring break.

“There were family members who slept over at the district headquarters until the strike was settled, and I almost feel like those who are invested in our kids’ health need to do the same thing, because the superintendent is turning a blind eye to what we care about,” she said.

While the solidarity sit-in over the strike inspired Westley when it comes to masks, it also had another consequence: Students needing to make up instructional time.

One of Goree’s daughters contracts respiratory illnesses easily and has been hospitalized for simple cases of colds and flus.

“I'm not keeping my kids in school for eight extra days where they could potentially be additionally exposed in a new wave of COVID with no masks,” she said. “That’s too much of an added risk.”

Still, she supported the strike and doesn’t fault the teachers for having walked out.

“They [my kids] were so excited to go back to school and see their teachers again,” she said. “We went out to the picket lines and saw them. … They really enjoyed it, getting to see their teachers out there and just learning about what unionization means and how it benefits workers.”

Negotiations aren’t done yet: Giving students back the time they missed

The district and unions currently are in another set of negotiations – this time, to figure out how to give students back the time they weren’t in classrooms. The district reported that students missed a total of 2,400 minutes during the strike.

"After more than two years of COVID-related learning disruptions, we cannot shortchange our students on critical learning time,” district Superintendent Jorge A. Aguilar said in a press release on April 11.

But those negotiations aren’t just necessary for student education: They also address a state mandate. California requires districts to provide at least 180 days of instruction. And if districts don’t reach a specific amount of minutes – which differ per grade level – they need to pay up. The estimated penalty the district faces is $46 million.

For a district that has faced budget challenges — and nearly avoided being taken over by the state in 2019 — that could be a big financial hit. Throughout the strike, SCUSD leadership repeatedly stressed its desire to avoid using one-time funds for ongoing expenses.

The current tentative agreements suggest the district will use a combination of one-time funds and ongoing spending “to balance the needs of employees and students,” district spokesperson Alexander Goldberg said via email.

“Moving forward, we will continue to operate per Board Policies and ensure that one-time funds are not used for ongoing expenditures,” he said.

Of its 13 districts, SCUSD is the only one currently under fiscal oversight from the Sacramento County Office of Education, which is mandated to review the viability of each district budget. At the upcoming district board meeting on April 21, a representative from SCOE will be presenting their fiscal analysis of the tentative agreement.

Also at that meeting, the district’s board will vote on making the tentative agreements official. Members of the teachers’ union voted to ratify their contract on April 5 and 6; it passed with 98.2% approval. SEIU Local 1021 members will vote on their contract later this week.

In the meantime, SCTA president Fisher is hopeful the district and unions can reach a solution to make up the time, calling current conversations “very constructive.”

Some potential solutions, according to Fisher: making up the time lost this year or spreading it out over this year and next, whether by extending the length of the school year or the amount of instructional minutes in each school day.

“While there’s a lot of details to work out, we’re both on the same page that … we need to work together to, if not completely eliminate, to mitigate the one-time losses the district would receive if the time isn’t made up,” he said.

SEIU Local 1021 president Karla Faucett said the union’s negotiators will begin meeting with the district about making up the time this week.