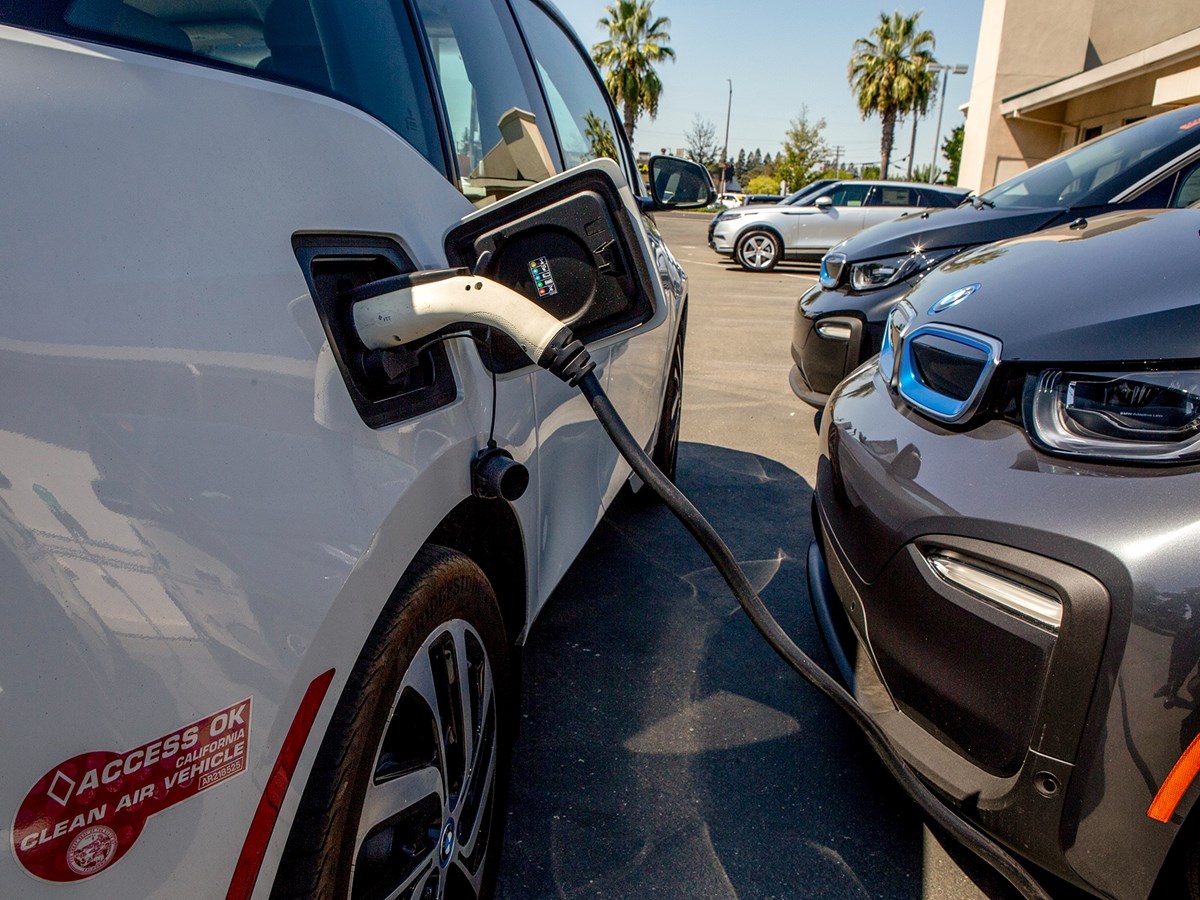 California has proposed a rule that would require all new cars to be zero emissions by 2035.

California’s clean-air regulators on Tuesday unveiled a far-reaching proposal requiring a ramp-up in sales of zero-emission cars, culminating in a ban on new gasoline-powered cars by 2035.

The rules to force Californians to end their dependence on conventional cars are a critical component to California’s goals to tackle climate change and poor air quality.

If adopted by the California Air Resources Board this summer, the regulations would be the first in the world and could pave the way for nationwide standards. At least 15 other states pledged to follow California’s lead on car standards on previous clean-car rules, and the federal government usually follows.

Carrying out Gov. Gavin Newsom 2020 executive order ordering the board to end the sale of gas-powered cars in California by 2035, the new proposal sets in motion the public regulatory process. Public comments will be collected for 45 days, then a hearing will be held on June 9 and the board is expected to vote in August.

“This is a hugely important inflection point. This rule finally, definitively puts us on the path to 100% zero-emission vehicles,” said Daniel Sperling, a member of the Air Resources Board and founding director of the University of California, Davis Institute of Transportation Studies.

An alliance representing nearly all automakers said in a statement Wednesday that they are “committed to electrification and a net-zero carbon transportation future.” Many major manufacturers, including General Motors, have already announced goals to ramp up clean-car models on a similar timeframe.

But the automakers added that it’s critical for governments to ensure that “everything from (electric car) infrastructure, demand, critical minerals and supply chain are in place.” Even then, the companies said the state’s proposed rules “will be extremely challenging even in California and may not be achievable” in other states.

The rule does not apply to sales of pre-owned cars, and it wouldn’t do anything to force the millions of existing gasoline-powered cars off roads. Only about 2% of cars on California’s roads were zero emissions in 2020.

Vehicles that run on gasoline or diesel fuel are the state’s biggest sources of planet-warming greenhouse gases, smog and dangerous particles. Under the proposed regulation, about 384 million fewer metric tons of greenhouse gases will be emitted between 2026 and 2040, according to air board staff — a little less than the total amount that the state emitted in 2019 across its economy.

California has already enacted standards that will require roughly 8% of new cars sold in the state to be zero emission in 2025, according to air board staff. That goal already has been exceeded: About 12% of California’s 2021 new vehicle sales were clean cars, according to state data.

But the pace would have to triple in just five years to reach the new target, which the automakers dubbed “aggressive.”

One of the biggest roadblocks could be the lack of charging stations for electric cars. Nearly 1.2 million chargers will be needed for the 8 million zero-emission vehicles expected in California by 2030, according to a state report. Right now, there are only about 70,000 with another 123,000 on the way, falling far short.

Another obstacle is the cost of the vehicles. “The cost to manufacturers will be high per vehicle in the early years, but significantly decrease over time by 2035,” the air board’s staff report says.

Electric cars now cost more to purchase, but price drops plus savings on gas and maintenance would add up, saving consumers an estimated $3,200 over ten years for a 2026 car and $7,500 for a 2035 car, the air board calculated.

In an effort to address consumer reluctance, manufacturers would be required to meet minimum performance, durability and warranty requirements for zero-emission vehicles. Cars must be able to drive at least 150 miles on a single charge, up from the current 50-mile mandate, and batteries will need to last longer and carry a manufacturer’s warranty.

The goal is to ensure that new and used zero-emission vehicles “can serve as full replacement vehicles for conventional vehicles in every household in California,” the air board says.

Environmental advocates had raised concerns about previous drafts, saying they ramped up too slowly, allowing millions of cars powered by fossil fuels to remain on the roads since the average car is driven for 12 years.

Starting at a sales requirement of 35% is “a marked improvement,” said Don Anair, research and deputy director of the Union of Concerned Scientists’ clean transportation program. Still, he said, “It’s kind of the bare minimum. So we really see that as a floor, not a ceiling, to get started.”

Environmental groups on Wednesday urged the board to set a more stringent target of 75% zero-emission sales in 2030. They also are seeking mandatory equity provisions that would ensure electric cars are in communities that suffer the most pollution.

Under the proposed rule, car manufacturers would be allowed to meet a small portion of their sales targets through 2031 with credits aimed at helping low-income residents. For instance, they could earn credits for selling less-expensive new zero-emission cars costing less than $20,000 or ensure that vehicles are offered up for resale in the state.

Last year Newsom approved a $3.9 zero-emission vehicle budget that included about $1.2 billion to bolster rebates and other clean-car incentives, particularly for low-income and disadvantaged communities. Another $300 million will go toward building charging and fueling infrastructure.

Newsom on Wednesday touted the $10 billion zero-emission vehicle funding package in his January budget blueprint, which he said would “expand access and affordability for all.”

While battery-powered cars emit no pollutants, the generation of the power that runs them does. However, air-quality regulators say emissions from electricity generation are far lower than from vehicles. Much of California’s electricity comes from natural gas, solar, wind and hydropower.

Other nations are on similar paths toward phasing out fossil fuel-powered vehicles, but no state or nation has adopted a rule that bans them. However, the European Union is considering a large package of climate change laws that would, in effect, prohibit fossil fuel cars by requiring a 100% cut in all carbon dioxide emissions by 2035.

Washington state’s Legislature also recently passed a transportation bill that set a goal that all cars sold, purchased or registered in the state by 2030 be electric vehicles. But it’s not an enforceable regulation like California’s would be if enacted this summer.

California’s proposal comes as gas prices soar to more than $5 per gallon in the state. Critics say the Newsom administration is sending mixed messages about gasoline-powered cars by proposing rebates for car owners.

The zero-emission vehicle proposal will require approval of the U.S. Environmental Protection Agency for implementation. Since the 1960s, the state has led the country in cleaning up the exhaust that creates California’s choking smog. The federal Clean Air Act gave California authority to set its own tailpipe emissions standards.

The Trump administration acted to eliminate that authority but President Joe Biden’s EPA overturned the decision in March. Newsom called it “a major victory for the environment, our economy, and the health of families across the country” and said the state “looks forward to partnering with the Biden Administration to make a zero-emission future a reality for all Americans.”