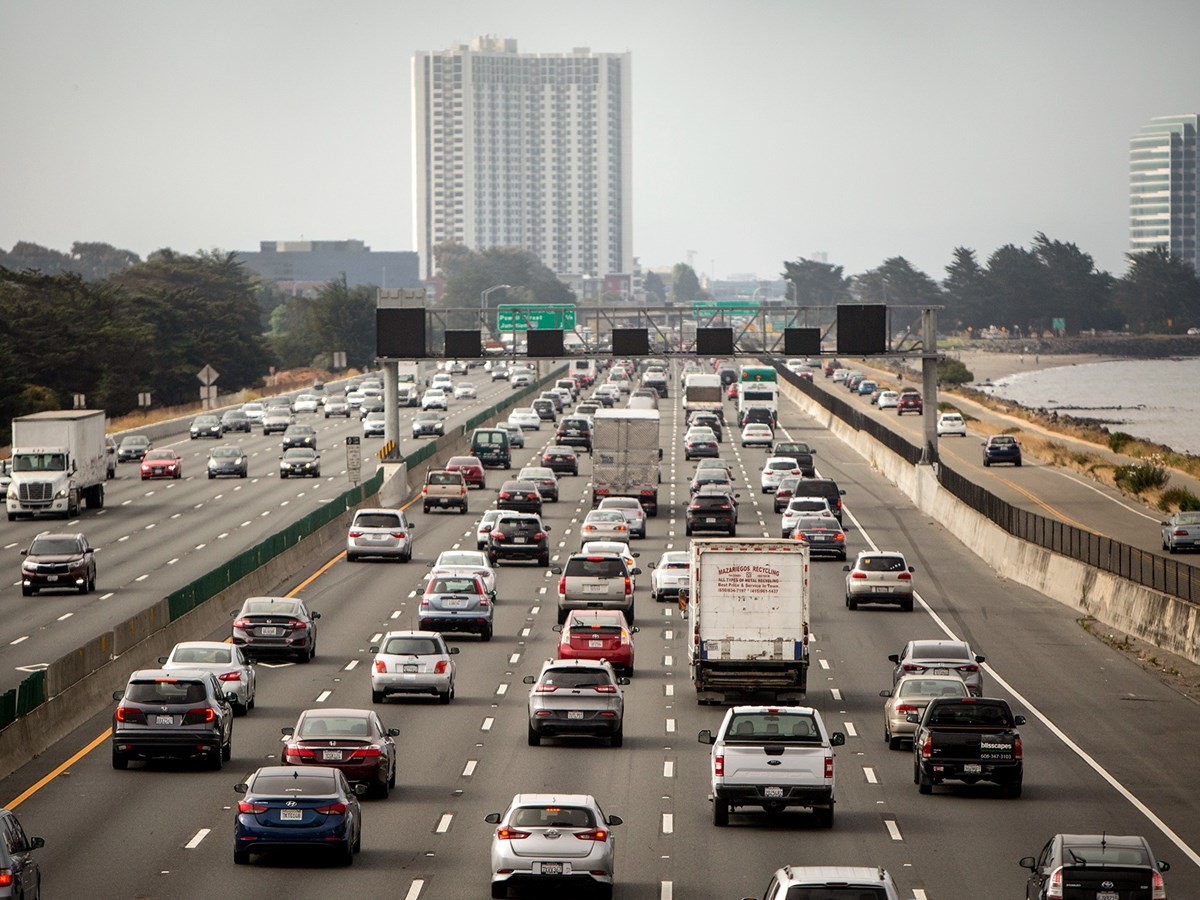 As California gas prices approach $6 per gallon, will proposals to have the state pay car owners blunt a move away from gas-powered driving? Vehicles head westbound on route 580 toward Oakland on July 22, 2019.

As California gas prices soar — reaching a per-gallon average of $5.90 on Friday — lawmakers are trying to rush to the rescue with pricey proposals to assist drivers. Gov. Gavin Newsom wants to give car owners $400 per car for up to two vehicles, at a cost of $9 billion.

Yet at the same time, California is investing billions to pry people out of their gas-thirsty cars and trucks. Positioning itself as a global leader combating climate change, the state offers rebates to knock thousands off the price of a Chevy Bolt or Nissan Leaf. The governor pledged $10 billion to accelerate the transition to electric vehicles, and has even made a commitment to end the sale of all new gas powered cars in California by 2035.

Sending money to car owners would work at cross purposes with the state’s climate goals in response to a political moment, said Danny Cullenward, policy director for CarbonPlan, a nonprofit climate-research organization. “It is not a policy that rises to the moment in addressing income inequality or climate,” he said.

So is the state engaged in a multi-billion dollar contradiction here? Would a payout for car owners essentially undercut the state’s climate efforts?

“I actually think it doesn’t, because of the way this is structured,” said Severin Borenstein, an economist and director of the Haas Energy Institute at UC Berkeley. Californians who get a check or debit card could use it for anything, said Borenstein. So long as gas prices are high, drivers still have an incentive to try to buy less gas and spend the state payment buying other goods.

What’s important, he said, is that this proposal doesn’t try to substantially drive down the price of gasoline — as suspending the gas tax entirely, which Republicans are calling for, would. Cheaper gas would encourage people to use more gas, and “that definitely undermines our environmental goals,” he said. He would have rather seen the payment targeted at lower income people though, “instead of people who own cars, many of whom are not struggling financially.”

The advantage of doing flat checks or debit cards, rather than cutting the gas tax to reduce the price, is that the checks don’t get bigger if you drive more, or smaller if you drive less, said Jesse Rothstein, a professor of public policy and economics at UC Berkeley, and faculty director of the California Policy Lab. In other words, they don’t change the incentives around how much gas people use.

Already, increasing gas prices have driven more people to search online for electric vehicles, but drivers looking to make the switch might have a hard time finding one, thanks to supply chain delays and pent up demand.

Under Newsom’s proposal, owners of electric vehicles would also receive the $400 debit cards, and the payments are part of a broader package, including:

Still, some environmental advocates wanted to see lawmakers do much more to speed the shift away from gas-powered cars.

RL Miller, a member of the Democratic National Committee and founder of Climate Hawks Vote, said she recognized that gas prices were hurting people and appreciated that the governor’s package included funding for transit and biking and walking projects. But she wanted a larger share of the total package spent on non-car transit.

Out of Newsom’s $11 billion proposal, about 80% would pay for sending debit cards to car owners, while about 7% would go to public transit agencies and 4.5% would go toward walking and biking infrastructure.

Miller would have preferred California address rising gas prices by offering a generous reward to people willing to ditch their gas-guzzlers — a ‘cash for clunkers’ program — as well as a commitment to hasten the date by which California will ban the sale of gas-powered cars.

“If you couple these long-term investments with the short-term gas card rebate silliness that they’re talking about,” Miller said, “then I would consider that acceptable.”

A spokesperson for the Newsom administration said the proposal isn’t a “this or” approach, it’s “this and.” “We know the long-term goal is to get people off oil,” said Erin Mellon, a spokesperson for the governor. “But in the short term, we need to do something to bring people relief who are feeling a lot of pain at the pump because of Putin’s war,” she said.

“Sending people $400 checks and saying ‘sorry gas prices are so high, I hope this helps,” isn’t the ideal message, said David Weiskopf, a senior policy advisor on climate and environmental issues at NextGen Policy, which advocates for progressive legislation. But he thinks relief payments, especially when the government has a large budget surplus, is appropriate.

There’s kind of a knee jerk reaction that says: ‘why are we rewarding vehicle ownership?’ he said. But he sees the policy as an attempt to reach lots of people who are in the DMV’s records, but who might not be reached by a program that distributes money based on whether they filed taxes, which is how income-based refunds often work. That includes some of the poorest Californians, who may not have to file state taxes. But, he said, he’d like to see the money also go to people with state IDs, to reach households that don’t own a car.

“It’s impressive how governments can react quickly to certain things — COVID, or high gasoline prices,” said Ellie Cohen, CEO of the Climate Center. She was complimentary of elements of Newsom’s proposal, but would have liked to see the funds targeted at lower-income people. “We’re just not going fast enough on climate change.”