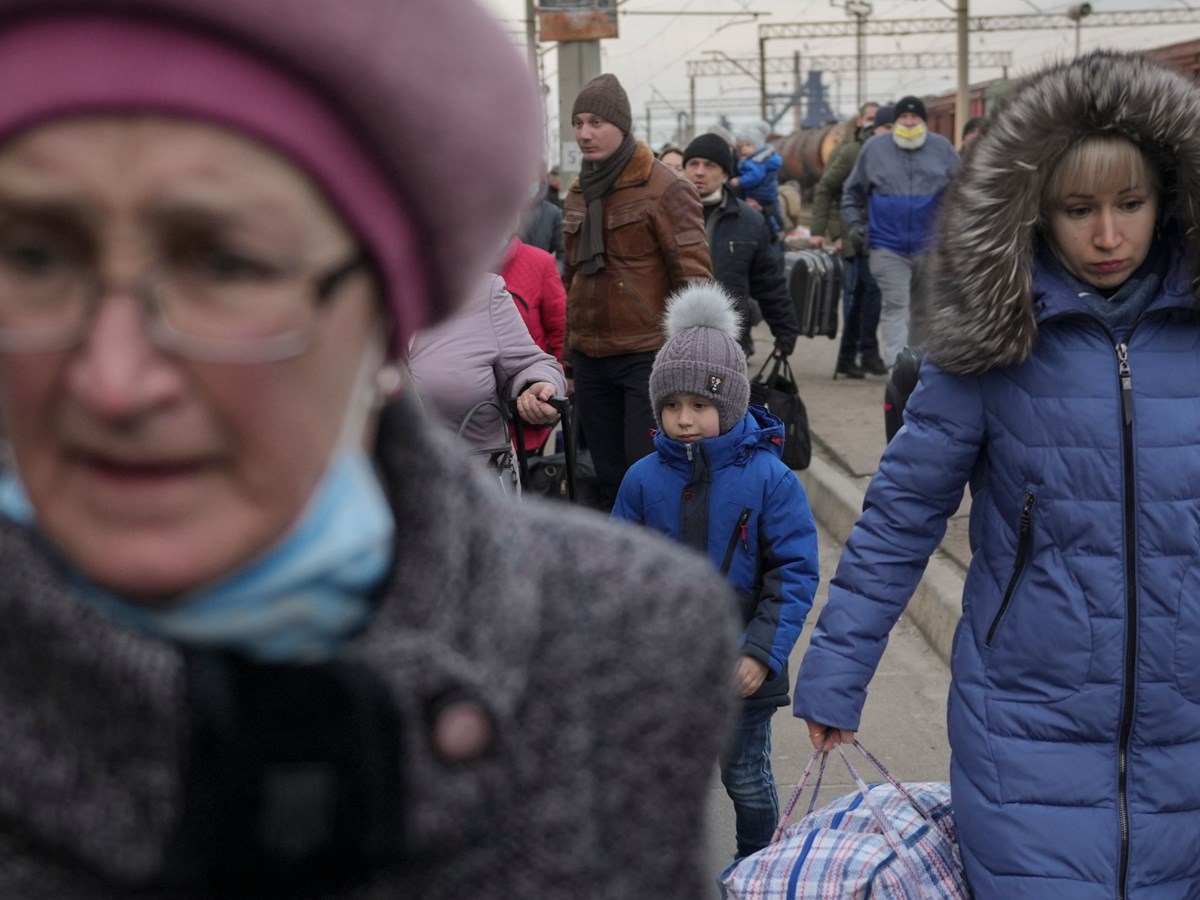 People rush on a platform to board a Kyiv bound train, on a platform in Kramatorsk, the Donetsk region, eastern Ukraine, Thursday, Feb. 24, 2022.

Zelenskyy asked for support with defense aid and a call to ban purchasing Russian gas and oil. California Rep. John Garamendi attended the call and spoke about Zelenskyy’s character.

“[He’s] an individual of enormous strength and courage. A fellow that knows that he’s number one on the Russia hit-list,” Garamendi said on CapRadio’s Insight. “When they talk about decapitating the Ukrainian government there, that’s meant physically.”

Russian forces have continued to lay siege to major cities, bombing a maternity hospital and putting hundreds of thousands of civilians in the difficult position of attempting to flee the country. Over 500 civilians have died since the invasion began.

Garamendi spoke with CapRadio’s Insight host Vicki Gonzalez about what was discussed during that video call with the Ukrainian president and what to expect next.

There were about five specific issues that he brought up in the conversation. He talked at length about the way in which the Russians invaded, the progress of the war — that the war was changing from a military campaign to a civilian annihilation campaign.

On Biden’s commitment to not buy Russian gas or oil

Now, the question of oil was raised by Zelenskyy, and he specifically asked for an embargo on all Russian oil. For the United States, this is a small matter. However, the Biden administration knows that it is a very big issue for Europe, and the Biden administration wisely wanted to work with the European allies and others around the world before we imposed an embargo either whole or in part.

And before we cut off the purchase of American oil from Russia … the European Union came forward with its version of [a] reduction of Russian gas and oil. So what’s happening here is a unified effort by Europe, [the] European Union, NATO countries and other countries to deal with the Russians, with the principal source of revenue for the Russian government, which is oil and gas.

In every step along the way, the Biden administration has been extraordinarily wise and skillful in not being the leader but rather organizing the coalition and then allowing the European Union NATO, as the case may be, to lead.

On setting up a “no-fly zone” over Ukraine

Well, a no-fly zone simply says that the opponent — in this case, Russia — cannot fly any of its aircraft over Ukraine.

Ok, how do you enforce it? And herein lies the problem. First of all, if the enforcement is done by the United States and our NATO allies, [that] would put us in direct combat with Russia because we’d have to put American planes in the sky to shoot down Russian planes … So a no-fly zone imposed by the United States or NATO is a huge battle. It’s no small matter, and we would be at war with Russia immediately.

Now, Zelenskyy recognized all of that … and he said, “We know you’re not going to do it. So give us airplanes so that we can defend ourselves.”

… And so he requested that [aircraft] be made available to him from the Eastern European countries of Poland, Romania and Georgia … That’s where this is heading.

On casualties on both sides, and how the war is progressing

Well, [there’s] not enough Russian casualties, although it’s been estimated over 10,000 casualties have occurred, and a good portion of those are dead.

We don’t have a good count on Ukrainian [casualties], at least not publicly, and I doubt that we will have a public count. We do know that there are hundreds of Ukrainian civilians that have been killed, and the way Russia has conducted its campaign, there will be many, many more — quite probably if Russia intends to destroy Kyiv the way they are destroying other cities in Ukraine, it is probable that those civilian deaths would rise to the high thousands, and the military deaths will be similar.

What is important to note here insofar as the conduct of the war, Russia is not doing well, and the body bags are now returning to Russia, and Putin’s jeopardy comes from the loss of Russian soldiers, many of whom have no idea why they are fighting in Ukraine.

The ultimate jeopardy for Putin are the streets of Russia. And as Russian learned what is happening in Ukraine, even with the massive, absolute blackout that Putin has imposed, there are very able hackers around the world that are streaming …. The videos and photos of what Russia is doing to its sisters and brothers in Ukraine.

The people, I guess there’s already some 15-17,000 Russians have been arrested in street demonstrations. Those numbers are going to dramatically rise.

And so the principal jeopardy is that Putin faces his own people and his soldiers are facing a very determined armed Ukrainian army and citizenry that refuses to become subjected to Putin’s rule.