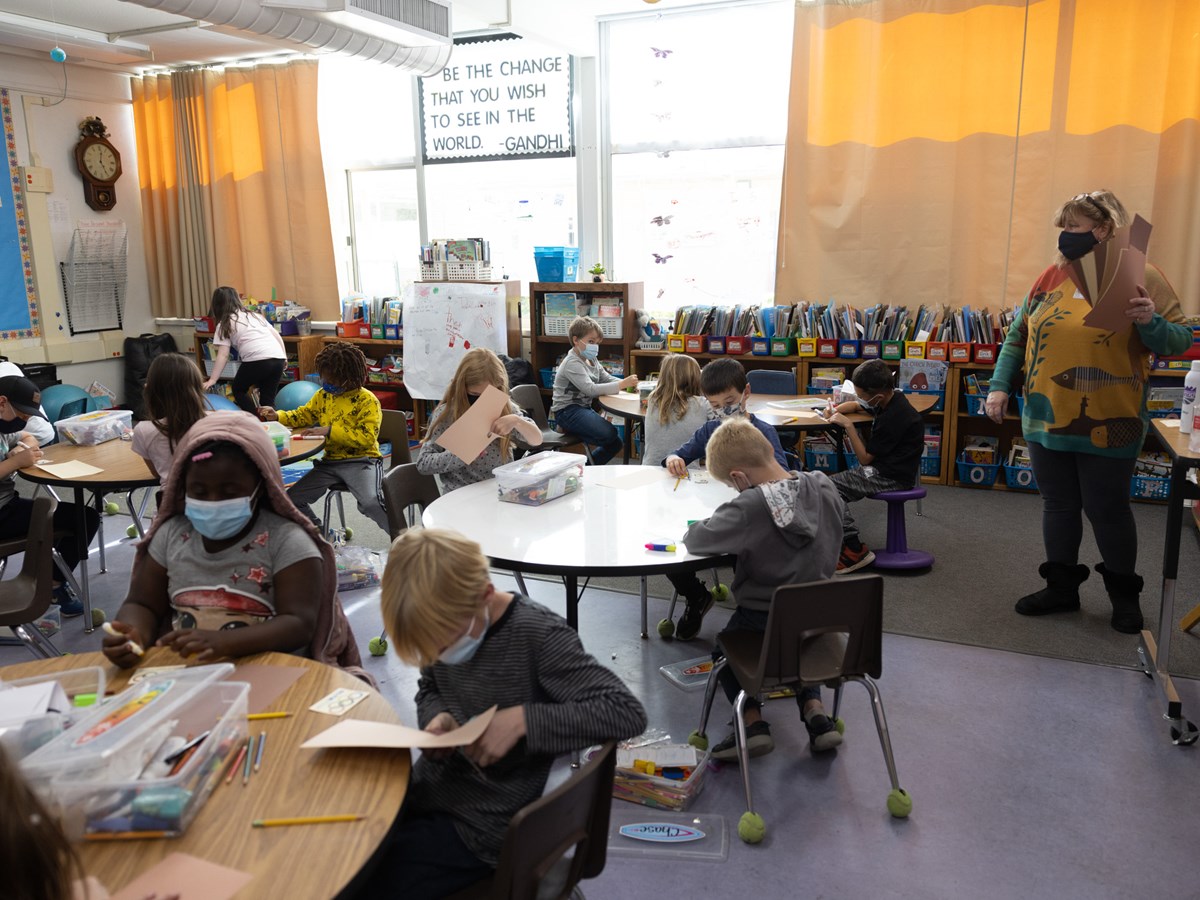 Anthony Pritchett, a senior at Nevada Union High, sat nervously at a school board meeting on Tuesday night as angry crowds yelled at each other over a vote to violate state law and lift the mask mandate for its students.

“There was just a lot of yelling,” he said. “It was very hostile. When the resolution was passed at the end, there was a roar of applause and yelling that lasted for at least a minute.”

As debates over mask and vaccine mandates heat up, the polarization is extending into student life in California. Students on both sides are being harassed for their beliefs, while education officials caught in the crossfire have to reconcile how to enforce COVID-19 protocols and provide an education to all students. Meanwhile, a Feb. 28 update from state officials about school masking policy looms.

“Friend groups have fractured over this,” said 18-year-old Pritchett, who serves as a student member on the board at Nevada Joint Union High School District, about 60 miles northeast of Sacramento.

“There’s a lot of tension on campus,” he said. “There are frequent protests and walkouts mainly in opposition to vaccines and masks.”

On Thursday, the 2,600-student district shut down schools because so many teachers called in sick in response to the vote. Making masks optional violated an agreement between the district and the teachers union, which states that any changes to safety protocols must be negotiated.

“The overwhelming message is that teachers don’t feel supported,” said teachers’ union president Eric Mayer. “They’re given an impossible decision to defy the board or defy state law.”

Nevada Joint Union High School District isn’t the first in California to make masking indoors at school optional. Leaders at several other districts made the decision in recent weeks in response to growing anger from parents and community members, especially as the state lifted other mask mandates for vaccinated individuals.

Research has been clear that face coverings reduce the risk of spread and vaccines reduce transmission and help prevent serious illness. And, according to a new poll, most California voters support mask and vaccine mandates for schools.

Students and educators say their school communities are already beyond the breaking point.

“The state said we’re going to keep masks on in schools, but we have no effective mechanisms to enforce it,” said Brett McFadden, superintendent of Nevada Joint Union High, before Tuesday’s vote. “If we have any disruption right now, we can’t call the police. We have no one to call.”

One day a week, 16-year-old Kinsey Hage refuses to wear a mask to school. She calls it “Freedom Fridays.” Hage, a junior at Bella Vista High School in the San Juan Unified School District near Sacramento, started the protest alone in January. Now, over 100 of her peers participate.

“It’s really frustrating to know that celebrities and adults can go to the Super Bowl unmasked,” she said. “I honestly think it’s so ridiculous and unfair.”

While some friends and teachers support her, Hage said her beliefs and activism has ended friendships and hurt relationships with other teachers.

“All these friends I’ve known since middle school won’t acknowledge me any more,” she said. “I started eating with some new friends.”

Then there’s the more unpleasant encounters both at school and on social media.

“I’ve had kids at school literally tell me to kill myself,” she said. “They’ll say ‘wear your mask,’ or they’ll just cuss me out.”

Jaxson Barrett, a 17-year-old at Carlsbad High School near San Diego, says he’s been denied entry into his classroom for two weeks for refusing to wear a mask.

“I was just tired of wearing them,” he said. “I wanted to see what happened. I went into class, and I got kicked out immediately.”

He said he’s been sitting outside for the entire school day trying to keep up with his assignments, despite the cold and rainy weather. About 10 students eventually joined him.

Other students across California have been calling for stricter enforcement of masking and more access to vaccinations and high-quality masks.

Michael Lee-Chang, a senior at Redondo Union High School in Los Angeles County, has been vocal on social media about maintaining safety protocols on campuses. He joined hundreds of students in a January walkout to urge school leaders to reinforce masking and physical distancing in classrooms.

Lee-Chang’s activism has led others to bully him, he says. The 18-year-old has become a target of harassment from conservative parents on social media. Students have dropped cartons of milk on his head, he said, adding that he now walks a different path to his classes to avoid certain groups of students.

“Every time I pass them, they yell, ‘unmask the kids!’” he said. “In a perfect world, everyone would be vaccinated, and we would be testing on a daily basis, but we don’t live in that world.”

Educators have their hands tied

Teachers and school district officials are trapped in a bind between public health and education laws.

If a student refuses to wear a mask, teachers have to remove that student from the classroom or risk losing their credentials for violating state law. But at the same time, school districts are required to provide instruction to all students.

And while at-home, independent study is an option for these students, parents must opt in. When parents refuse, state education laws require that the student be placed in a classroom. Education officials like Gayle Garbolino-Mojica, superintendent at the Placer County Office of Education, feel there’s no way out of this loop.

“We’re caught in a Catch-22,” Garbolino-Mojica said. “In reality, nobody wants to physically remove children.”

Ultimately, some teachers are keeping students outside, while others are just letting them into class. Apart from the legal and logistical challenges, the damage to relationships between educators and their students might be irreparable. Educators statewide worry about whether public education can recover.

“I will say that the fabric of our schools are deteriorating minute by minute,” Garbolino-Mojica said. “I’m personally worried and concerned about what our communities will look like once this is over.”

Parents across the state are sharing online instructions about how students can defy masking rules. Let Them Breathe, an anti-mask mandate advocacy group, posted some of these resources on its website. Younger students are memorizing scripts at Saugus Union School District, a K-6 district in Los Angeles County, according to Superintendent Colleen Hawkins.

“Today, across the district there’s probably about 85 students who refused to wear masks,” Hawkins said on Tuesday. “They say, ‘it’s my First Amendment right.’”

Because her district serves mostly younger children, Hawkins said teachers and administrators are careful not to scold or punish these students.

“We just can’t have them in the room with their peers,” she said.

Hawkins and several other district leaders across California say they’ve written to the governor and other lawmakers to ask that they lift the indoor mask mandate for schools and to keep a personal belief exemption for the COVID-19 vaccination requirement.

Two years into the pandemic, local education officials are more willing to risk sacrificing safety protocols to maintain order in their communities.

“I’m worried about the frustration that everybody’s feeling, and what that will mean for public education,” said Hawkins. “I don’t know how communities will continue to trust their local school districts.”

A handful of school districts haven’t waited for state officials to loosen regulations.

“For me, it started with the governor’s press conference, when he said that he’s going to lift the mandate for everyone, except for school children and teachers,” said Jee Manghani, board president at Rancho Santa Fe School District in San Diego County.

His school board voted Monday to make masks optional for students. Manghani and other district leaders said the benefits outweigh the risks.

“I already felt confident that even if the state didn’t agree, we were making the right decision,” said board vice president Annette Ross.

At Nevada Joint Union High School, it remains unclear when teachers will start returning to school. Teachers union president Mayer said the teacher absences are not an organized effort.

For some board members, giving into the anti-mask crowd not only breaks state law but also sets a precedent for the looming vaccine mandate. The California Department of Public Health will require students to be vaccinated once the FDA fully approves the vaccine for their age groups. Students may need to be immunized by as early as July 1.

Jamie Reeves, a board member at Nevada Joint Union, voted to keep the masking requirement to honor the district’s agreement with its teachers. She said it’s an unfortunate precedent to set, but she concedes that trying to enforce statewide COVID-19 mandates is taking too much time and energy away from educators.

Pritchett, who’s had more than half of his high school career disrupted by the pandemic, said that compromising safety might be the only way to have peace.

“I do wish this culture war could have been fought somewhere else,” he said. “It’s a huge distraction to education.”