The team snowshoeing near Donner Summit as they prepare to recreate the Donner relief expedition that happened 175 years ago.

Courtesy: Elke Reimer, one of the members

This winter marks 175 years since the Donner Party got stuck in the Sierra Nevada, forcing some now infamous, unthinkable life-or-death decisions.

Monday morning, a team of four long-distance runners from the Sacramento region are leaving Johnson Ranch in Wheatland headed to Donner Lake — a hundred miles away — on foot. The trek is to honor the relief parties sent to help the snowbound pioneers back in 1847.

“I think sometimes the relief parties were lost in the story,” Tim Twietmeyer of Auburn said. “It was mostly around people getting out of Donner Lake and a lot of horror on the cannibalism. But there was some real heroes in the relief party that hiked all the way back to Donner Lake to save their friends, but had no family connections. They just wanted to do it because it was the right thing to do. "

The group will arrive at Donner Lake in the Sierra Nevada on Friday, Feb. 19, the anniversary of the first relief team to reach the Donners and other stranded families. Their progress can be tracked live during the 100 mile trek.

The actual route taken by rescuers 175 years ago has been lost to time, the group has worked to recreate it as best they can. Fair Oaks resident Bob Crowley, the unofficial team leader, said they used historical maps and GPS, but also their own on-the-ground observations. 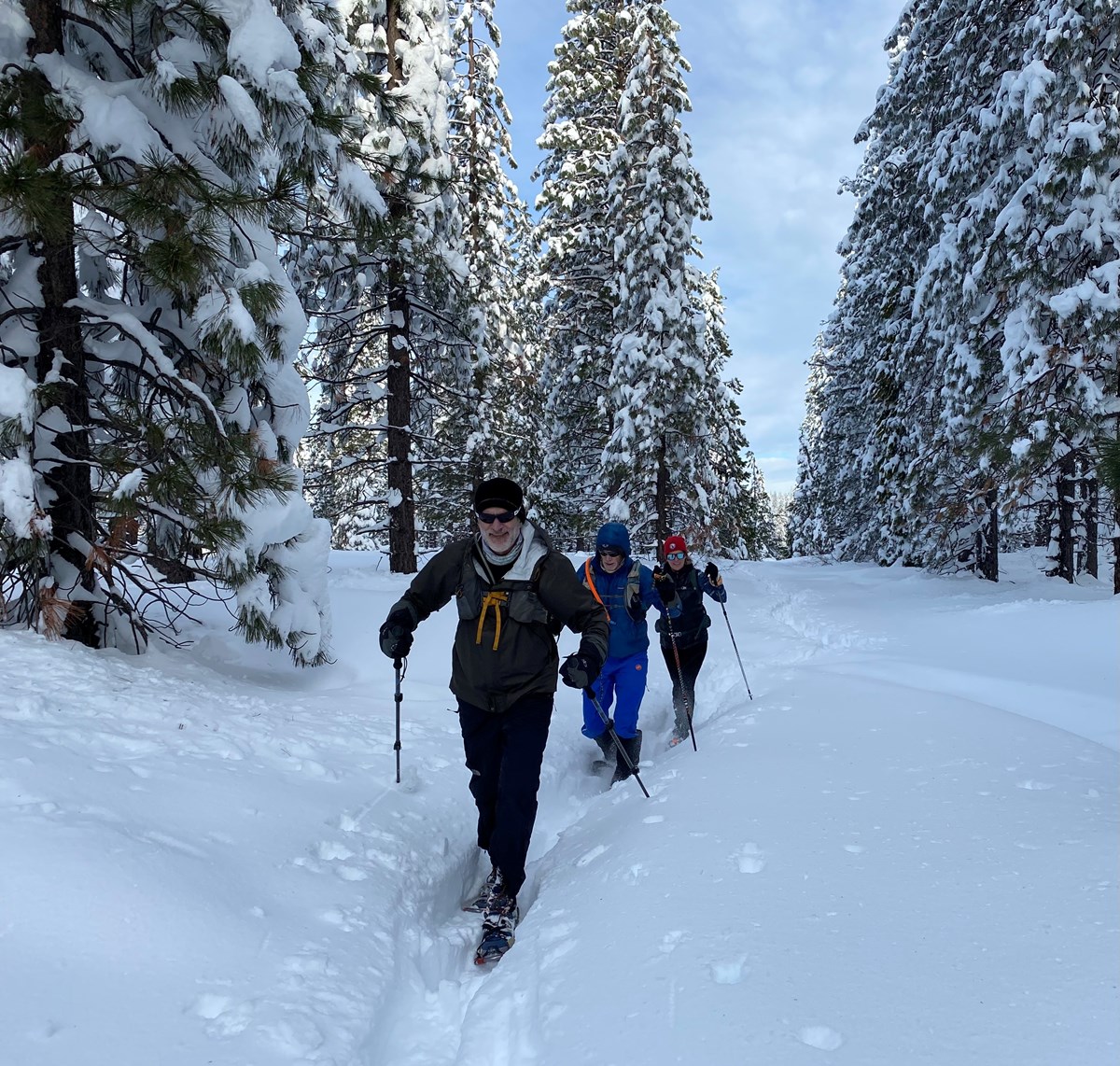 Three of the four people practicing their snowshoeing skills prior to the actual trek. Courtesy: Elke Reimer, one of the members

"We spent hundreds of hours in the field looking at research from the books and then comparing it to what we actually see because the landscape is no different now than it was 175 years ago," he said. "And we piece it together just like a jigsaw puzzle until we think we've got it."

One thing that has changed since then is who owns the land around the trail. Crowley said the group reached out to property owners for permission.

While the past month has been extremely dry in the Sierra, the team will still be ratcheting up snow shows for the march. Twietmeyer said that snow will be one of the biggest challenges, as it was 175 years ago.

"Some of the people on the relief party thought it was a suicide mission that once they got into the snow, if they'd ever stop moving, they did freeze to death and they thought that was what was going to happen," he said. "So when we get into the snow, it'll be really tricky. It's going to be a little crusty and firm for us, but you know, we'll just have to adapt to the conditions as we go."

Auburn's Elke Reimer said she would have preferred a few storms before the hike like what blew through the region in December to better match the struggles of the original rescue parties.

"We have a small storm window coming, so we're crossing our fingers and toes that we're going to get a little bit of some freshies on the ground,"  Reimer said. "But we do have great modern clothing, that type of thing. We will be in period clothing for part of this. But yeah, fingers crossed for some good weather meaning to most people what you would call bad weather."

After this week's event, the group is looking to highlight other major events from the region's past.

"Oh, absolutely," said Jennifer Hemen of Fair Oaks, the fourth member of the group. "We have lots of plans to bring some more history to life, and we're hoping that others will join us."