Why is a tenant protection bill failing in the California Legislature, again?

An aerial view of the 400 Catalina apartment building (center) and the historic condominium at 416 Catalina Street (in front), which is the site of a potential eviction under the Ellis Act, in the Koreatown neighborhood of Los Angeles.

Photo by Bing Guan for CalMatters

Tenant advocates, racial equity groups, YIMBYs and even some of their usual opponents wanted to see the bill pass.

The cities of San Francisco and Los Angeles — which rarely see eye to eye on housing issues — as well as every Democrat on the Assembly Housing and Community Development Committee had signed on.

So why did Assembly Bill 854, which would have curbed an owner’s ability to evict their tenants using the Ellis Act in rent-controlled jurisdictions, die without even a floor vote in the Democratic-supermajority Assembly?

Proponents of the longtime progressive priority — which promised to preserve the stock of affordable apartments amid a historic shortage — point to an aggressive campaign mounted by the deep-pocketed real estate industry.

“It’s insane to see so many groups working really hard on this and then still for it to not be enough because the opposition’s influence on our legislature is so immense,” said Sarah Abdeshahian, an advocate at the Tenderloin Housing Clinic, which co-sponsored the bill.

But just as a diverse group of advocates coalesced to support the bill, thousands of property owners — even those outside unincorporated Los Angeles County and 20 rent-stabilized cities directly affected — opposed it, united by a sense that the state is chipping away at their rights, just as COVID-19 has decimated their business.

“‘It may not be in my area, but it could be, next time,’” Sanjay Wagle, senior vice president of  governmental affairs at the California Association of Realtors, said his members told him. “I think there’s a growing sense of sort of commonality of interest, which may not have existed before, between the Fresno property owner and the San Francisco property owner.”

Assemblymember Alex Lee, the Democrat from San Jose who authored the bill, says the legislation would have passed out of the Assembly and over to the state Senate but for the recent departures of four Democrats: Lorena Gonzalez from San Diego, Ed Chau from Monterey Park, David Chiu from San Francisco and Jim Frazier from Fairfield.

Lee is still weighing whether to reintroduce “substantially the same bill” next year or this legislative cycle — an option left on the table by having avoided a losing floor vote. Similar bills have been introduced, unsuccessfully, at least three times before.

“All those things are on the table luckily, and that’s something we’re still working out with our coalition, given the volatility of resignations,” Lee said. “That’s always our wild card.”

“This issue has been around for years and I understand the vote got very close, with significant new support for many corners,” said Chiu, former chairperson of the Assembly Housing and Community Development Community, who co-authored the bill last year and is now San Francisco city attorney. “And so I’m hopeful that there will be a real conversation about this in the coming months.”

The bill took aim at the Ellis Act, a 1985 state law that allows owners of rent-controlled properties to evict their tenants if they take all the units of a building off the rental market – a path that could otherwise be blocked by local governments guarding the precious stock of affordable units. Once off the market, those apartments can be sold as condos or demolished to make way for new homes.

More than 27,000 rent-controlled units have been removed in Los Angeles since 2001 using the Ellis Act, while San Francisco has lost about 5,000 units since then. And they’re sorely needed: the California Housing Partnership estimates 1.2 million low-income renter households don’t have access to an affordable home, and building a new government-subsidized unit costs an average of $500,000.

Lee’s bill mandated a five-year holding period before evicting tenants — an attempt to allow struggling property owners to go out of business, as had been the law’s original intent, while preventing speculators from buying up cheap properties and flipping them overnight. The bill also restricted the use of such evictions to one building per owner per decade.

That would significantly curb Ellis Act evictions, as three-quarters of evictions in Los Angeles between 2016 and 2019 occurred within five years of purchase, according to a recent analysis by Alexander Ferrer, policy and research analyst at SAJE in Los Angeles. But because of a glaring lack of transparency around who owns buildings in California, the effect on mom-and-pop landlords — a group the Legislature holds dearly — is difficult to determine.

In an opposition letter to lawmakers, the California Association of Realtors asserted that the bill would devastate “Struggling Small Property Owners Who Are Seniors or Individuals of Color.”

“I think it’s concern-mongering for a problem that we don’t know exists,” Ferrer said, citing the lack of demographic data on property owners. Wagle cited anecdotal evidence from their members.

Ferrer’s analysis found that owners who had a property registered under their own name evicted tenants, on average, eight years after purchase — while limited liability companies, responsible for more than half of those evictions, did so in an average of just three years. But in California, it’s not uncommon for individual property owners to put even a single rental into an LLC.

That means a bid to win more votes — an amendment that carved out an exemption for “natural persons” who own no more than four residential units — is “not logical,” according to Debra Carlton, executive vice president and chief lobbyist for the California Apartment Association.

Ferrer found 45% of Ellis Act evictions during that time period in Los Angeles were filed by owners who held five properties or less – L.A. ‘s definition of a mom and pop landlord – a percentage Wagle, from the California Association of Realtors, says is not insignificant. Besides, he argued, the impact of the pandemic on small property owners should not be understated. Some landlords, he said, have gone nearly two years without rent payments, thanks to eviction bans, while still having to upkeep their properties.

“Among small rental property owners there’s this sense of, ‘Wait a minute. We’re enduring all these problems right now and again, more burdens are being placed,’” he said. 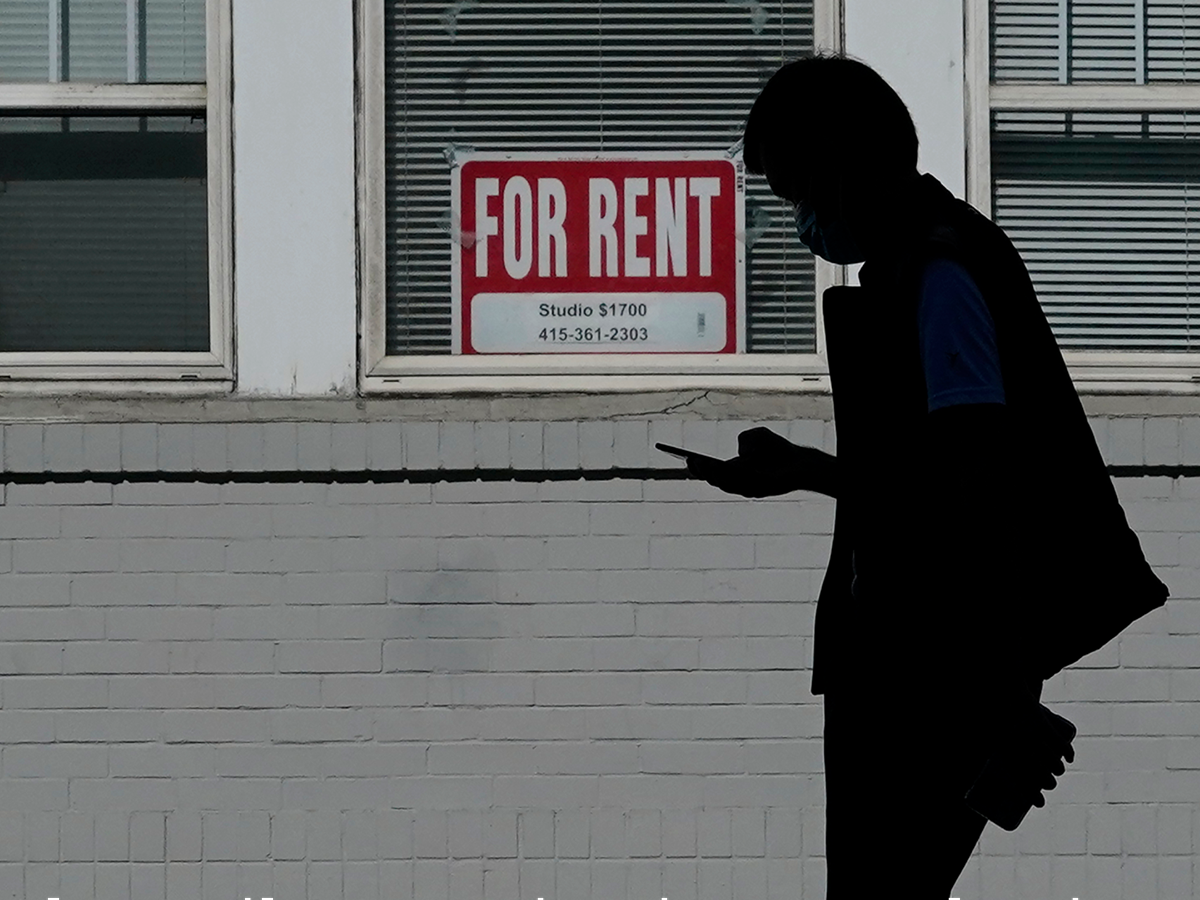 A man walks in front of a For Rent sign in a window of a residential property in San Francisco, Tuesday, Oct. 20, 2020.AP Photo/Jeff Chiu

Tenant attorney Sean Chandra, from Public Counsel in Los Angeles, said the threat of an Ellis Act eviction remains a crucial tool for landlords, even if the court process isn’t completed. Instead of going through the Ellis Act, which mandates relocation costs between $8,650 and $22,350 depending on a renter’s age, income and tenure in the building, some owners pay tenants to leave by their own choice in “cash for keys” arrangements.

Chandra’s client, who declined to be interviewed, is facing an Ellis Act eviction at 416 South Catalina Street in Koreatown. The elderly woman and her adult son are paying $975 a month for their two-bedroom in the six-unit building, where they moved in 1996. The stucco-clad, L-shaped two-story, originally commissioned by a L.A. Times advertising executive in 1940, was deemed historic by the city, which means it can’t be demolished. The owner is hoping to mount it on a truck and move it elsewhere – and renting isn’t in the picture.

The owner plans to erect a luxury tower in its place — following in the footsteps of a 61-unit tower next door, where a 576-foot studio rents for $2,654 a month and where, according to the building’s website, “living your best life has never been easier.”

“You tear down an old building, you want to build something that’s going to maximize your income,” said John Greenwood, the developer’s attorney. “So it’s hard to incentivize building low-income property. And these Ellis Act evictions do displace poorer people, that’s understood. But, you know, that’s also the definition of progress – making things better.”

According to Greenwood, the tenant will be able to rent an affordable unit in the new building, provided she qualifies. Ellis Act restrictions in L.A. stipulate that if a developer builds market-rate units, a portion of them must be affordable, or all the units must be rent-controlled after the initial rent is set. But in contrast to rent-controlled units, affordable housing usually comes with income and immigration status restrictions, and sometimes, a long waitlist.

Demolishing rent-stabilized housing to make way for exponentially more housing is taking place across Los Angeles, according to Moira O’Neill, senior research fellow at the Center for Law, Energy, and the Environment at UC Berkeley, who recently co-authored a report for the California Air Resources Board about social equity in housing development patterns.

O’Neill and her colleagues found that the demolition of at least 2,400 housing units in L.A. between 2014 and 2017 gave way to at least 12,000 new units. But the demolition of 1,600 units that were rent stabilized gave way to only about 1,300 affordable units on those same sites. Their geographic distribution was particularly troubling.

“It makes sense that people are trying to prevent that,” O’Neill said.

“I think California YIMBY is a great example of an organization that endeavors to find the three P solutions: The production solutions, the tenant protection solutions and the affordable housing preservation solutions,” he said. ‘We’re not eager to pit those solutions against each other.”

The California Apartment Association, however, dubbed the bill the “Stay in Business Forever Act,” arguing that it restricted landlords’ freedoms. Carlton said while a property owner could still sell their building, without the option of turning below-market apartments into more profitable condos or market-rate units, the universe of buyers shrinks considerably. The powerful California Chamber of Commerce opposed the measure for the same reason, as did the California Building Industry Association.

Carlton also argued the bill would block “tenancies in common,” in which several families buy a duplex or fourplex together — the only way for some families to enter homeownership as median home prices top $700,000 in California.

“I support homeownership, but the question is: ‘How are you getting there?’” said Joan Ling, an urban planning professor at the UCLA Luskin School of Public Affairs. “Are you going to get there by dislocating renter families that most likely are going to have to move out of the area where they are living? There’s a big public policy question here.”

Abdeshahian, from the Tenderloin Housing Clinic, said that during the two weeks leading up to the vote, the legislators who had originally demonstrated their support for the bill began parroting the talking points they read in opposition letters by the Realtors and the Apartment Association, which spent $1.6 million and $1.3 million, respectively, in total lobbying efforts in 2021.

“I just don’t buy that,” Carlton responded, describing a clear division between the organization’s lobbying and campaign efforts. “This has just been a consistent policy that legislators haven’t agreed with.”