A closer look at the signs held up by protest attendees calling for safety on the job.

Dozens of Sacramento City Unified transportation workers gathered in front of the school district’s headquarters on Friday morning, carrying purple-bordered signs from their union and their frustration with the district.

The workers, represented by SEIU Local 1021, were joined by teachers association members, labor leaders and school board members, among others. The group circled the parking lot, chanting “What do we want? Safety. When do we want it? Now.” After, several bus drivers with decades of experience said they loved their jobs but faced unsafe working conditions during the pandemic and omicron surge. They also said they earned low wages and experienced a lack of communication from the district. 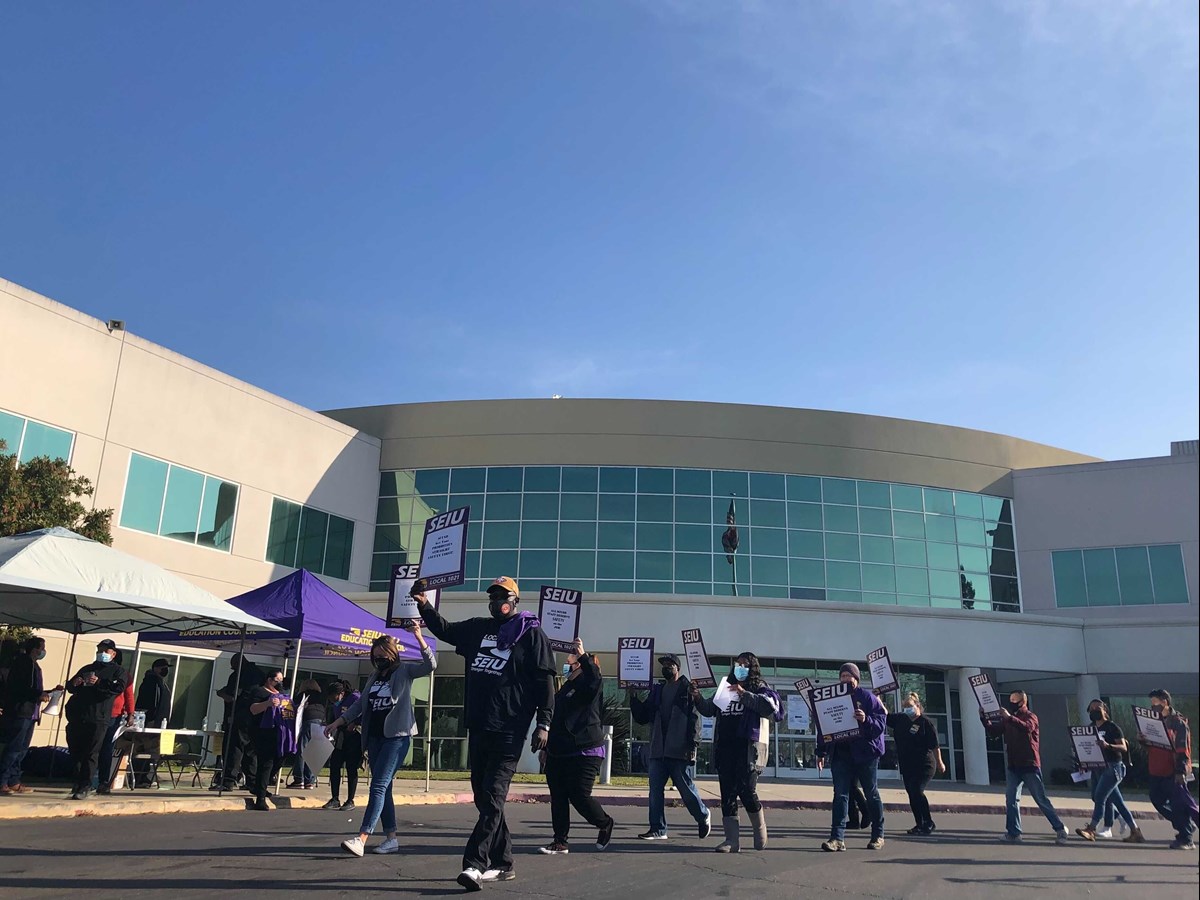 Driver Casondra Wills, who has been working for the district for 25 years, shared her concern about not only drivers, but also students on buses who could be exposed to COVID-positive students.

She described one situation where, she says, one of her students tested positive on a Thursday. The next morning, she picked him up — but when she got to the school, the teacher ran to her and said, “He’s not supposed to be on the bus” because he was positive.

The transportation workers want the district to address their concerns over working conditions, communication about COVID-positive students and staffing. Their protest was also in response to the deaths of a bus driver and attendant because of COVID-19, according to a union press release.

Wills says district leaders don’t understand “what it is that we go through every day,” she said. “That’s not gonna fly. That’s not OK.”

Per the district’s guidelines, any student or staff member who tests positive for COVID-19 must stay home and isolate for at least five days.

Among the other protections the district has implemented to protect its students and staff include distributing N95 or KF95 masks to students and staff, said district spokesperson Alexander Goldberg. He said transportation staff first received a box of N95 face masks on Jan. 19.

Drivers are also required to disinfect and sanitize their bus “at least once a day,” and routes include a built-in sanitization stop between each school run, according to Goldberg.

“Protecting the health and safety of all staff and students is of utmost importance,” Goldberg wrote in an email. “If any Sac City employee, including bus drivers, is feeling symptoms of illness or tests positive for a COVID-19 infection, they are always directed to remain home or are sent home immediately if already at work or school. This policy protects the safety of all employees and students.”

But health and safety measures are falling short, according to drivers.

At the rally on Friday, district board member Lavinia Grace Philips asked the crowd what protections they had while driving buses.

“We open our windows,” one worker added.

Other protections drivers say aren’t being followed include physical distancing on buses.

Driver Jennifer Sharp says she was told to expect each student sitting three feet apart when in-person classes resumed. But that’s not what she sees on her daily route. Instead, she drives a full bus, every seat occupied, because there aren’t enough drivers and routes have been consolidated.

Like Wills, driver Gil Patterson, who has been with the district for 40 years, identified district communication about COVID-positive students as a problem. 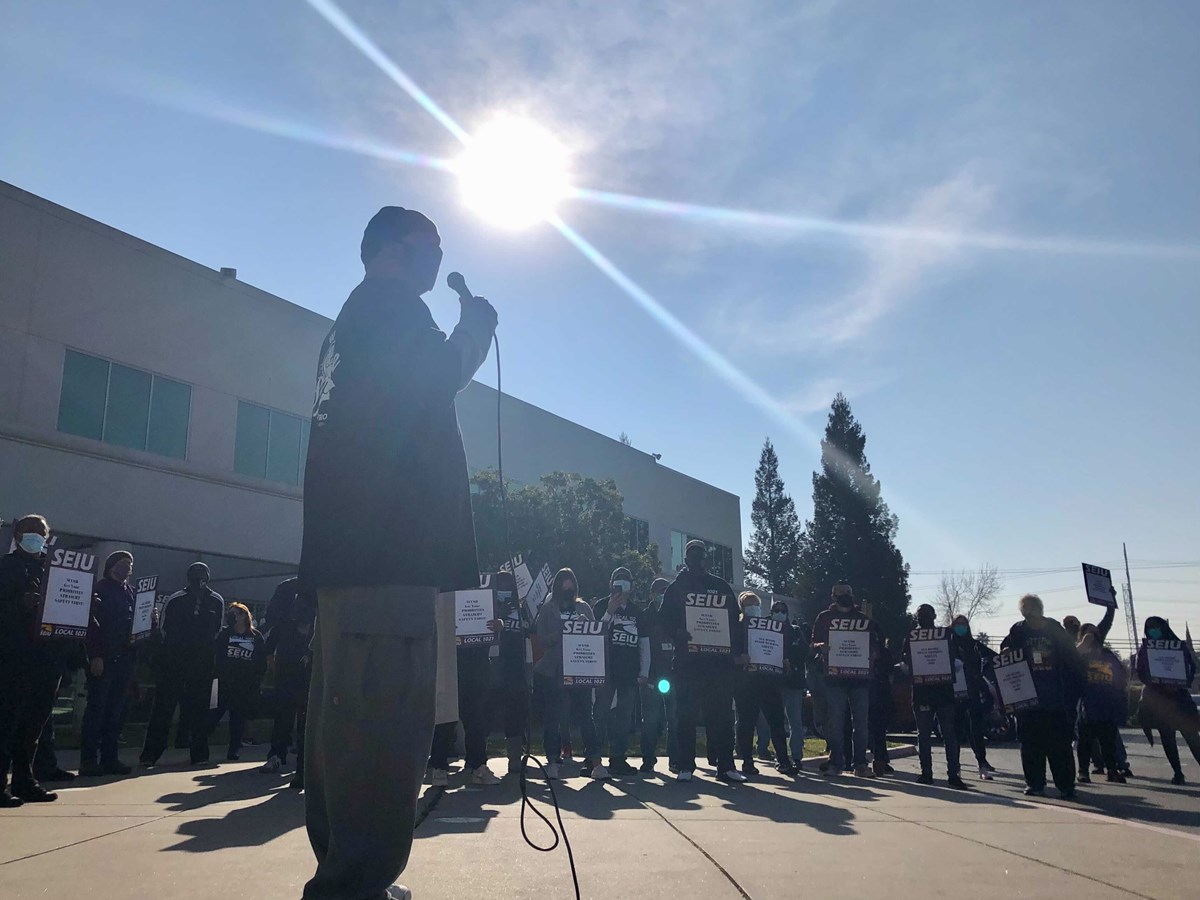 Driver Gil Patterson, who has been with the district for almost 40 years, shares his frustration with district leadership in front of a group of transportation workers.Janelle Salanga / CapRadio

Goldberg said the district does not notify drivers “when they ‘may’ have had a [COVID] positive [student] on board.” The district’s transportation department, he says, will identify if a positive student is a bus rider and pass that information to a contact tracer.

But Patterson found out that 10 students on his bus tested positive a week after they received their test results. He says it was teachers who first communicated the information to him.

But Patterson wants the district and board to look more closely at where driver safety, district communication and related policies are falling short.

He and other drivers want the district to increase wages in part to attract more workers, so students can be spread out across more buses.

“We are tired, we are hungry, we are broke,” he said. “And yet we love the job we do. Don’t take advantage of what we do.”

Wills, who has been driving for the district for over 25 years, said she makes $20.49 an hour.

Under the union’s most recent collective bargaining agreement with the district, which expired in June 2020, Wills earns the salary ceiling for the district’s bus drivers.

She said drivers are leaving to go elsewhere in the region, like Sacramento Regional Transit, where bus operators can potentially earn up to $31.10 an hour.

District spokesperson Goldberg said transportation currently has 119 employees, 79 of whom are bus drivers. The district employed 99 bus drivers at the start of the 2019-20 school year.

Dominique Chadwick, who’s been with the district as a bus driver for eight years, is currently working as a dispatcher while recovering from surgery.

“I’ve had to make phone calls to parents actually letting them know, ‘Unfortunately, we can’t even transport your child today, because we just don’t have enough drivers to do it,’” she said.

Chadwick said the district has been contracting other companies to fulfill regular transportation obligations, adding that she’s heard of students being transported via Ubers due to shortages.

Goldberg confirmed the district is working with contractors but refuted the latter, writing, “Sac City Unified does not utilize Uber or any other app type service to transport Sac City Unified students.”

SEIU Local 1021 reached an agreement on Feb. 3 with the district on adjusted COVID-19 employee leave and hazard pay.

In a Feb. 8 press release, the district said the agreement provides one-time stipends for all staff “to recognize the hard work of our classified workers who help us keep our schools open.”

It also addressed allegations of staff being told to continue working even after being exposed to COVID-positive people, without being told that those people had tested positive.

“Any suggestion that the district directs staff to work without PPE protection, to work when ill or if exposed to someone who tests positive for COVID-19 is false,” the press release states.

Per the agreement, bargaining unit employees now have 10 days of COVID-19 supplemental leave during the 2021-22 school year.

Correction: A previous version of this story reported the number of bus drivers employed by the district before the pandemic as “around 120,” based on conversations with drivers. The district later confirmed the specific number was 99.