Omicron slammed California’s workforce. Was there another way? 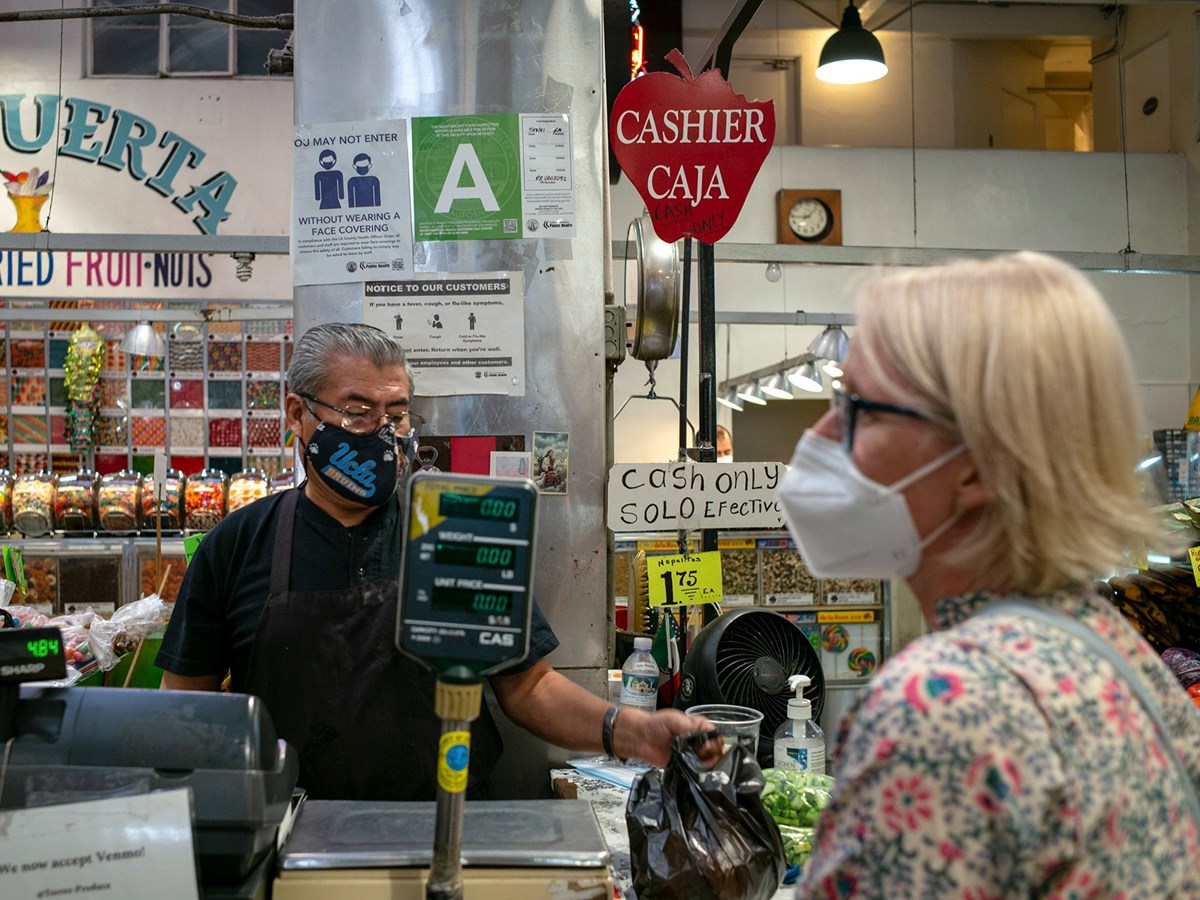 Adan Hernandez, a fruit vendor inside the Grand Central Market in Los Angeles, completes a transaction on Jan. 19, 2022. According to Hernandez, he has worked here since 1983.

While COVID-19’s omicron wave appears to have crested, it leaves in its wake sick nurses and burnt out bus drivers, short-staffed hospitals and canceled surgeries, school districts scrambling for substitute teachers and grocery store cashiers forced to choose between their health and their finances.

Other countries met this variant with fresh lockdowns. Other states authorized state bureaucrats to moonlight as teachers. In New York City and Washington D.C., businesses are now required to check the vaccine status of their customers.

Would any of that have kept California workers safe, curtailed the worst of the spread and avoided cascading labor shortages? And what can lawmakers do now to prepare for the future of COVID — be it the next deadly variant or the low-level simmer of a pathogen gone endemic?

Did it have to be this way?

If public opinion were no object, tighter mask mandates and increased vaccinations after the delta wave in the late summer would have blunted some of omicron’s impact, said Dr. John Swartzberg, a clinical professor emeritus of infectious diseases and vaccinology at UC Berkeley. But the variant’s transmissibility is so formidable that even with those measures, omicron still would have been a problem, he said.

“Frankly, I think that California did a reasonable job trying to balance protecting people from the virus and allowing people’s lives to function in a more normal fashion,” Swartzberg said.

Broad shutdowns, he said, probably would not have made a manifest difference in how many people got sick, a sentiment shared by other public health experts contacted for this story.

While other states and countries responded differently to omicron’s spread, case counts suggest that policy differences didn’t make a drastic impact on the course of this surge, said Jeffrey Clemens, a health economist and associate professor at UC San Diego.

“There probably weren’t many steps that governments could have taken in real time in an effort to significantly blunt the wave,” said Clemens.

It may take a couple months, to know whether local or state policies made a difference in how many people got severly ill or died from this surge.

If the state deserves criticism for its strategy leading up to the current crisis, it was for focusing too narrowly on vaccine promotion, said Peter Chin-Hong, an infectious disease physician at UC San Francisco.

“Putting all the eggs in the vaccine basket” meant there was less focus on stockpiling masks, tests and new treatments like monoclonal antibodies that have rendered COVID much less of a threat for the vast majority of vaccinated patients, he said. “I think we could have been more proactive as a state. We have the resources, we have the brainpower, we have the wherewithal.”

Another cohort of Bay Area-based medical professionals and researchers say that if there’s a lesson to be learned from the most recent COVID surge, it’s that state public health officials have been too slow to recognize the actual, much-diminished threat that the virus poses to most people in 2022.

Whether the state could have done more to limit the spread of omicron is the wrong question to ask, said emergency medicine professor Jeanne Noble, who co-authored the letter. Instead public health policy should strive to “get that very small sliver of our population maximally protected and not in this more clunky way of restricting the lives and social norms of the population at large.”

No lockdowns in sight

Even as many Californians were still learning how to pronounce “omicron” in early December, Newsom had already ruled out the possibility of another lockdown. With so many state residents vaccinated, such drastic social distancing measures were no longer demanded by the science, he said at the time. Nor, presumably, would they have been tolerated by much of the COVID-weary public.

California’s Democratic governor wasn’t the only governor to make that calculation. Even as hospitals ran out of beds, schools ran out of unexposed teachers and graphs ran out of vertical space to accommodate the stratospheric case numbers, not a single state imposed new lockdown measures.

That was a sharp contrast from two years prior. Back then, blue state governors in particular were quick to shutter businesses and schools. This time the prevailing focus has been to keep things up and running. In Michigan, Oklahoma, and North Carolina, governors handed down emergency orders deploying state workers and school district administrative staff into classrooms in order to keep schools open. New Mexico’s governor, Lujan Grisham, went a step further and became a substitute herself.

Other states have tried to address omicron-induced worker shortages with financial incentives. Lawmakers in Kentucky are considering whether to offer loan forgiveness to nurses and social workers.

Earlier this month, U.S. Health and Human Services Secretary Xavier Becerra said that the department would be spending $103 million on programs that address health care worker “burnout,” $8.7 million of which will go to three hospitals and one nonprofit in California.

Since omicron arrived in California, the Newsom administration has tried some version of all of these approaches. Earlier this month, the governor issued an executive order making it easier for schools to hire substitute teachers. In the budget proposal the governor submitted to the Legislature earlier this month, he requested that the state continue to waive credentialing fees for new teachers and that $3 million be set aside to “research health care shortages.”

In November, prior to the arrival of omicron, the administration finalized a request to Legislature to set aside an extra $1.4 billion in emergency COVID spending above and beyond the state budget passed last year. Of that total ask, $478 million would be used to to hire more nurses and clinicians to relieve short-staffed hospitals. This week they bumped up that total request to $2.3 billion, with another $8 million set aside for “surge” staffing.

For all that extra spending, the administration appears optimistic that the wave will soon recede and that a new one isn’t likely to follow. Tucked into his budget proposal is the  assumption that Californians will be back to work at “pre-pandemic labor force levels” by the late summer or early fall of 2022.