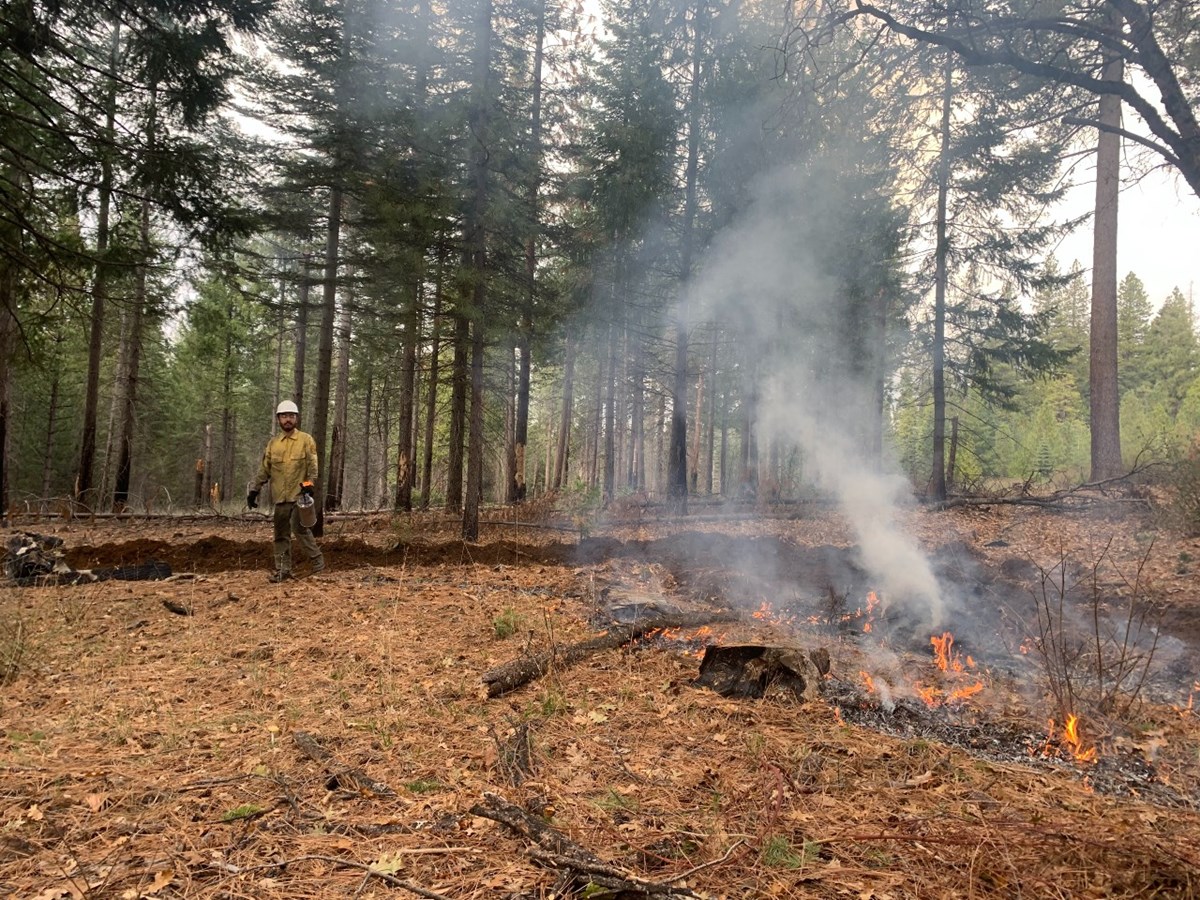 A prescribed burn demo at the Blodgett Research Forest on Nov. 19, 2021.

There are dozens of ways you could find an answer, but Rob York has his own simple litmus test. It starts with his own question:

“Can you run through it?”

As he makes this ask, he gestures toward a patch of forest. To one side, a dense area. To the other, a more spacious plot where many trees are charred, some fallen over and broken apart — all evidence of the prescribed burns and other intentional tactics used to thin the area out.

Of the two, which is York’s choice for a healthy forest? It’s the spacious plot with burnt trees, he says, where there’s plenty of room for a person to, in theory, go for a light jog.

“The idea is that if it doesn't have a lot of fuel on the ground [like] sticks and logs, you should be able to run through it,” he said.

Just over a couple decades ago, most researchers in California would have told you a healthy forest was one thick with vegetation, free from fire altogether.

“It was very common 15 years ago that I’d bring people here and I’d ask them, ‘What do you think? Is this a healthy forest?’ and they’d say, ‘Yeah, this looks great. There’s a lot of trees … therefore, it’s a healthy forest,’” he said.

Now, with the looming threat of wildfires, those same researchers have changed course.

York’s example is part of Blodgett Forest, an isolated area just west of Lake Tahoe. York, who is a researcher with UC Berkeley, and others like him investigate different land management techniques at the site, such as prescribed burning, which is deliberately setting a fire to clear out the area.

And with those techniques come a revised image of a healthy forest.

“They’re green on the top and black on the bottom,” York said of trees after prescribed-burning. “To me, that does represent a sense of naturalness.” 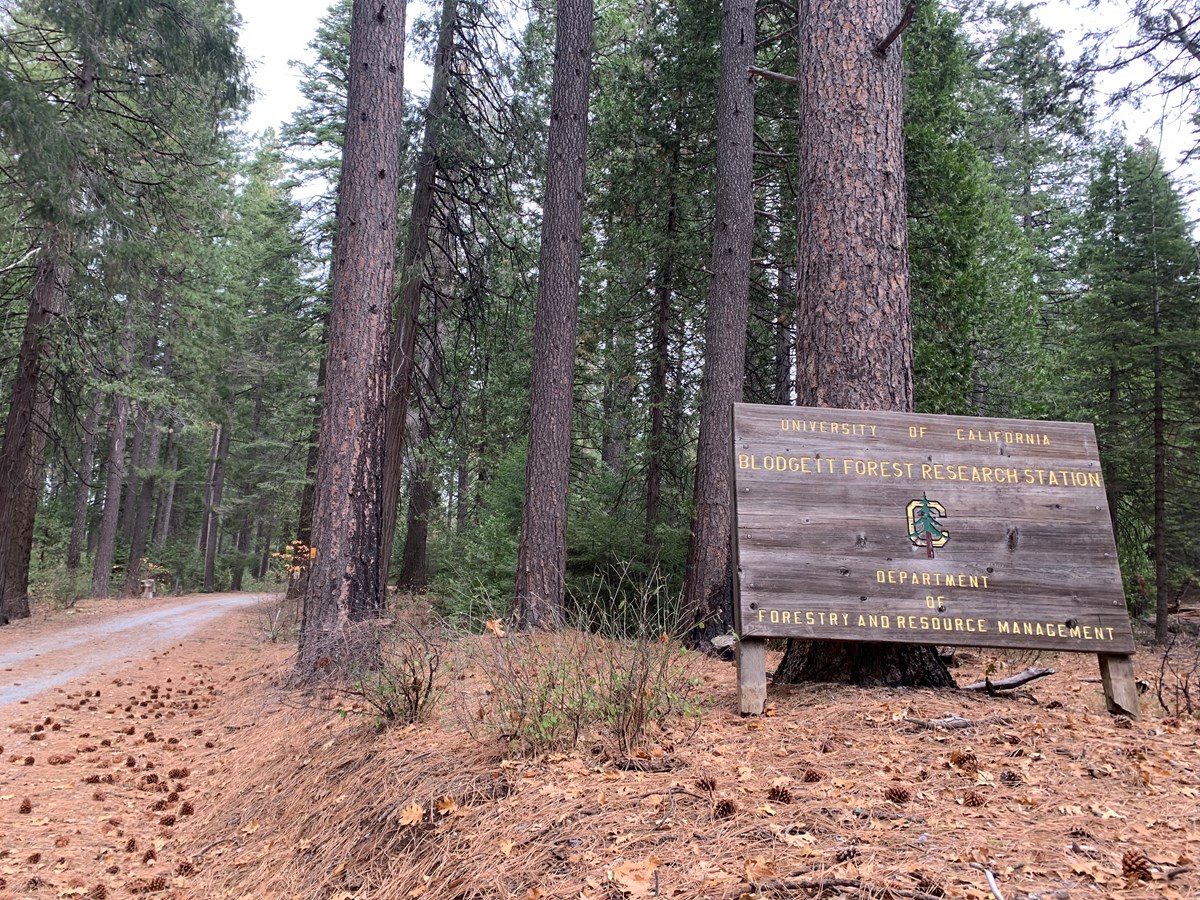 Located along the Georgetown Divide in El Dorado County, the Blodgett Research Forest is an area used by researchers to explore different ways to manage California lands.Manola Secaira / CapRadio

This forest is parceled out like patchwork, with different pieces of land assigned to different management techniques, in order to evaluate their effectiveness side-by-side.

Although the research in this area goes way back, beginning some time after the University of California first acquired the site in 1933, it wasn’t until the launch of a study in 2003 that researchers shifted their focus to the reintroduction of fire and, chiefly, efforts to make forest land more fire-safe.

“As the needs change, so does our management here,” she said.

This was not always the priority. Over the years, different interests have ruled forest management. Timber harvests. Endangered species. Carbon storage. The list goes on.

“It’s really a societal question on what mix you’re able to have,” said John Battles, a professor of forest ecology at UC Berkeley who’s conducted studies in the forest. “And then that becomes, ‘How do you balance those?’”

A recent history of forest health

To understand the dueling interests that have shaped California lands, Battles says you have to look back at the last hundred years of forest management.

He starts his retelling in the early 1900s, when state officials made fire suppression the norm. This decision meant stopping the spread of natural fires, as well as the burning practices that Indigenous communities had conducted for thousands of years.

Timber harvesting reached its pinnacle mid-century, leading to the decimation of many thousands of California’s oldest trees. This began to slow down in the ’80s, when advocates for endangered species like the spotted owl vied for denser forests that provide better habitat while suppressing fires continued.

As a result, more trees survived and fuels built-up on the forest floor — like excess brush and fallen trees — since there were no fires to clear them out.

As forest density reached its peak in the ’90s, new problems arose. Insect infestation, like the bark beetle, spread more easily when trees were in close proximity. And fires, of course, gained easier traction in crowded areas, as well.

Researchers began to take note of these changes. Battles says that, for him, a turning point was the Moonlight Fire in 2007. At 60,000 acres, it wasn’t massive by today’s standards. But at the time, it marked a jump in size from the fires that came before it.

“That was already much more severe fire conditions than what we’d seen,” Battles said. “We knew back in the early 2000s that with climate change and the conditions of our forests … that we were setting things up for bigger fires.”

These concerns gained enough traction to launch the fire and fire surrogate study in 2003, when Battles says researchers reintroduced fire to natural landscapes at Blodgett through studies that remain active to this day.

And with even larger fires seen throughout California in the past few years, he adds that attention to their work has grown.

“It’s definitely on people’s radar now as a real risk,” he said.

Even in Blodgett Forest, where prescribed burning has been used for years, there’s no hope of the area returning to what it looked like a century ago.

Consider the patch of forest York used in his example of a healthy area: He says that a hundred years ago, this area of forest was one where he could expect to find larger, older trees than the ones he sees now. But after decades of relentless timber harvest, this is no longer the reality.

“Despite our best efforts as managers, we can’t replace those immediately,” he said. “But we can certainly try to work toward that, and that’s been part of the strategy.”

There’s evidence of California’s shifting priorities when it comes to treating natural lands — most recently, the state’s commitment to $1 billion in wildfire management funding — but this is more than a money problem.

“We want to be a leader on climate change. We also want to increase our wildfire resilience in California. We also want to protect our endangered species and biodiversity — and we have to figure out how to do that,” Battles said. “But we have to recognize that some of these goals have trade-offs, that you can't have everything in one place.”

Then comes the balancing act. Roughton says that Blodgett provides a microcosmic example of what California’s forests could look like as a whole.

The Blodgett Research Forest is parceled out like patchwork, with different pieces of land assigned to different management techniques, in order to evaluate their effectiveness side-by-side.Photos courtesy of Ricky Satomi

“Part of our goal here is to be able to study them, but also to show people, show the public, what they look like and talk about the trade-offs that we have to make,” Roughton said.

Their research does not mean all forest land in California should be treated the same way. Dense forests, for example, can still prove useful so long as they aren’t the status quo. Historically, they’ve been particularly important in the state’s mission to reduce carbon: Since trees soak it up, they’re helpful in combating emissions.

But while dense forests can be helpful for storing carbon, Battles says they’re particularly vulnerable to wildfires, so it isn’t reliable for carbon mitigation if it can be incinerated during the next massive blaze.

Just like at Blodgett, Battles says that California can tailor its management in different areas depending on need, with fire safety being another focus along the way.

“You clearly probably want more fire-safe forests near urban areas,” he said. “In the backcountry, perhaps that's where you can store more carbon there, and so you have those trade-offs going on.”

And this balancing act is one the state must come to terms with if California’s forests are to change for the better, he says.

“Our job as scientists is to provide ways to evaluate these trade offs,” he said. “Extremes in both ways are going to be counter-productive.”