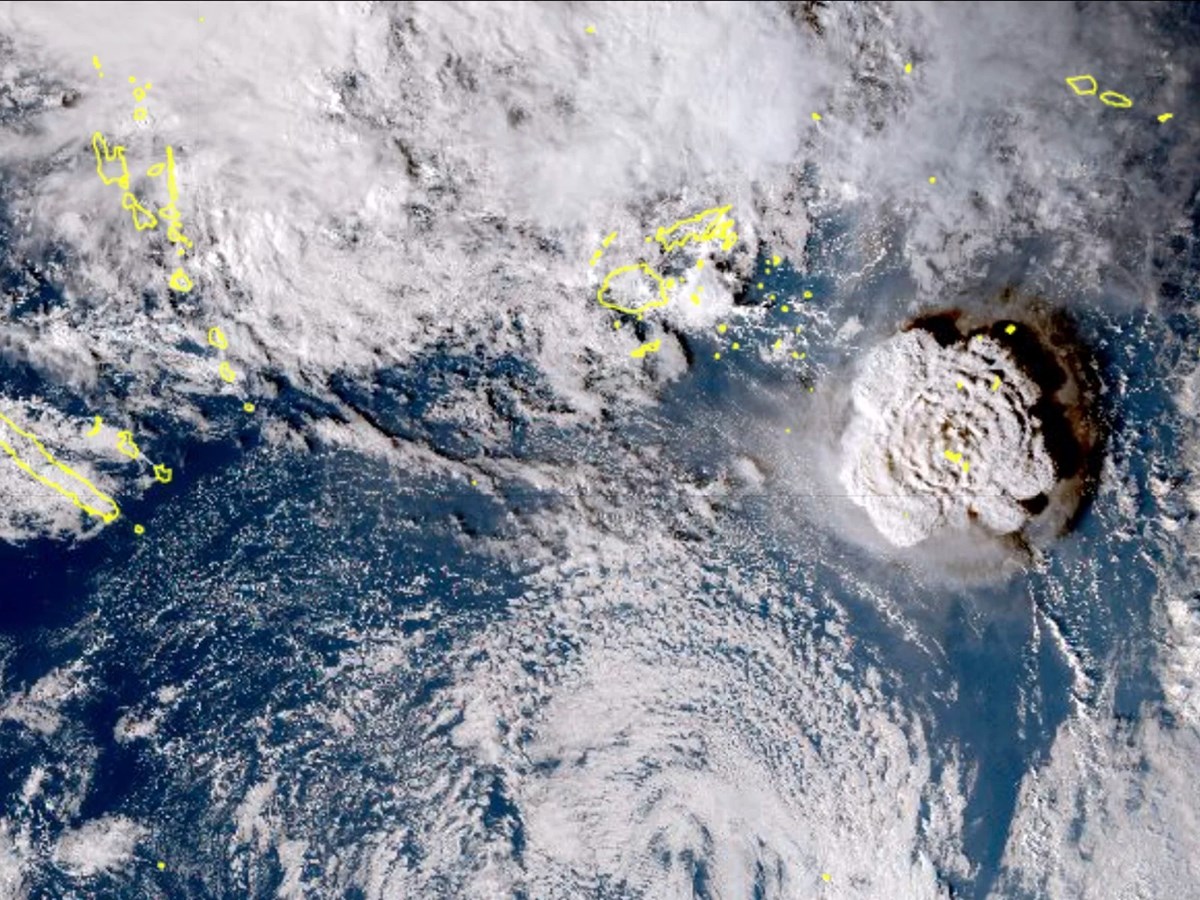 This image taken by Himawari-8, a Japanese weather satellite, shows an undersea volcano eruption at the Pacific nation of Tonga.

A massive underwater volcano that erupted just before sundown Friday sent waves several feet high smashing into the shores of the Pacific island nation of Tonga and triggered tsunami advisories from Australia to Canada, including the U.S. West Coast.

Plumes from the explosion reached more than 12 miles above sea level, according to the Tonga Geological Services. At its widest, the cloud caused by the ash and steam reached about 150 miles across, making it easily seen from satellites.

In Tonga, home to 105,000 people, the extent of the injuries and damage caused were still largely unknown. Communications were disrupted for hours, according to the Associated Press.

Waves flooded parts of the capital Nuku'alofa — just 40 miles from the site of the eruption — including parts of the grounds at the Royal Palace, according to Radio New Zealand.

On Twitter, a Tonga resident named Faka'iloatonga Taumoefolau posted a video on Saturday showing feet-high waves washing across a road into homes.

The activity from the Hunga Tonga-Hunga Ha'apai volcano continued into Saturday morning with another, less powerful 10- to 15-minute-long eruption, according to the Tonga Geological Service.

Geologists saw massive explosions and lightning during the eruption

Taaniela Kula, an official in the country's Ministry of Lands and Natural Resources, told the news website Matangi Tonga that geologists had observed massive explosions and lightning during the eruption.

"Big day yesterday indeed! It was great getting out there during the volcano's peak hours. It's a geologist's dream to see actual geological events in process," he said.

Ash from the eruption could contaminate drinking water, the Tonga government warned. Residents were advised to cover water reservoirs and to check their roofs for ash before reconnecting rainwater systems.

After the eruption late Friday, authorities from nations across the Pacific issued tsunami warnings and advisories, from Fiji and Samoa to as far away as Australia and Canada's British Columbia.

New Zealand officials warned of "unpredictable surges" on the north and east coasts of the country's North Island. In Australia, a marine threat advisory warned that "dangerous rips, waves and strong ocean currents" were possible on Saturday evening.

Tsunami surges felt from Hawaii to the U.S. West Coast

The first U.S. state to feel the effects of the eruption was Hawaii, where waves over a foot were reported in Kauai and nearly three feet tall in Hanalei. "We are relieved that there is no reported damage and only minor flooding through-out the islands," the Pacific Tsunami Warning Center said.

The waves reached the western shore of the continental U.S. on Saturday morning. The National Weather Service issued a tsunami advisory for the entire West Coast and all of Alaska's southern coast, including the Aleutian islands, warning that strong currents and waves were expected — but not the "significant inundation" of a full-fledged tsunami warning.

Authorities prepared early Saturday for the possibility of a small yet potentially disruptive surge. Beaches were cleared from San Diego to San Francisco. More than 100 people were evacuated from the boats, docks and shoreline of the Berkeley Marina, according to news site Berkleyside.

Stay on higher ground. This is a current look at Miramar Beach in Half Moon Bay. @SMHarbor #CaWx #California @sanmateoco @sccounty pic.twitter.com/irnxkofMGi

In a tweet, the NWS office in San Diego warned of "strong currents hazardous to swimmers, boats, and coastal structures." Residents were advised to move away from the beach and marinas.