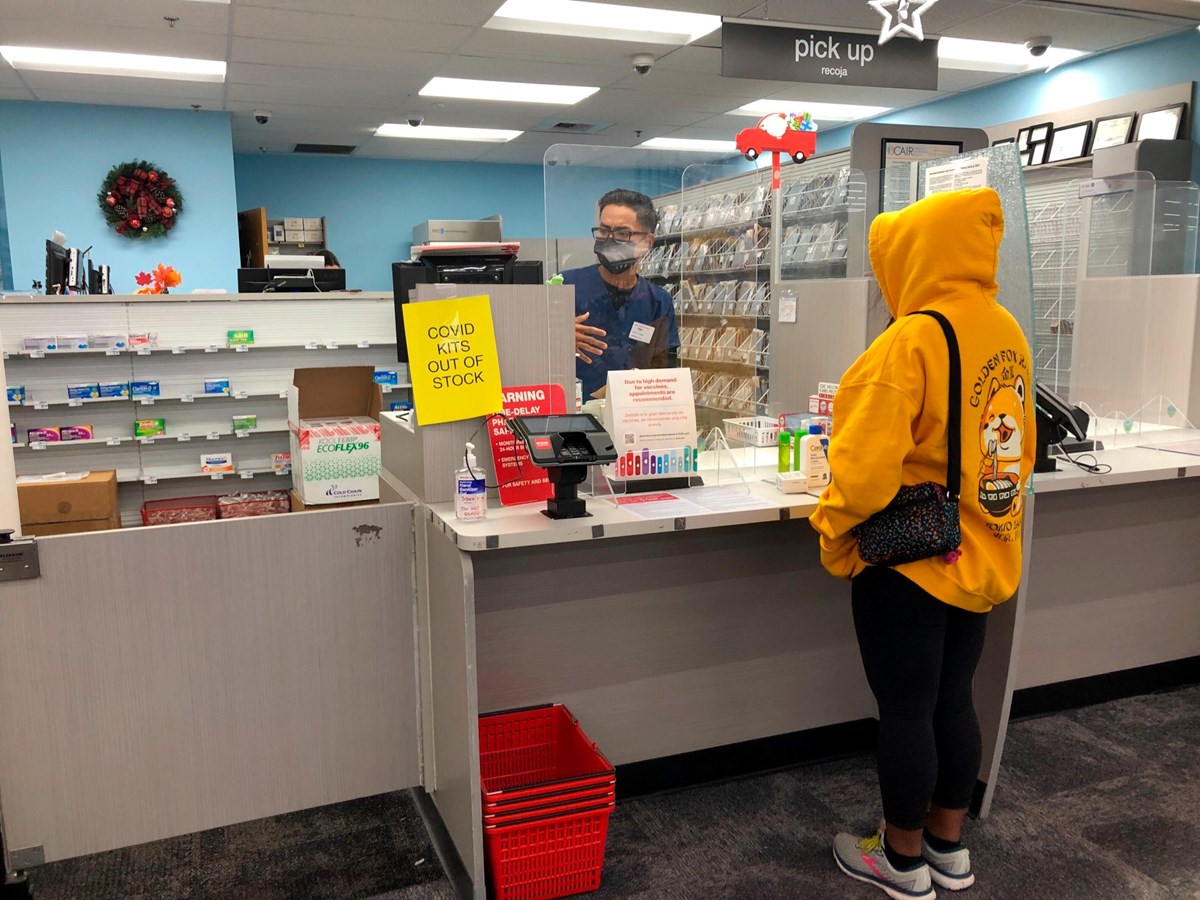 A woman waits at the pharmacy counter at a CVS on Sunset Boulevard in the Echo Park neighborhood of Los Angeles where the location is sold out of CIOVID at-home rapid test kits during the omicron surge on Tuesday, Jan. 4, 2021.

Over the past two weeks, the average number of new people in Sacramento County who reported testing positive each day for COVID-19 has more than tripled. The surge is the largest since the pandemic began, largely thanks to the contagious omicron variant and holiday gatherings, said Dr. Olivia Kasirye, Sacramento County’s public health officer.

But the surge hasn’t been met with the same stringency present earlier in the pandemic, leaving businesses and individuals having to make their own calls on safety. Last week, the county announced it would not be making efforts to mandate business closures, require vaccination and restrict indoor dining. 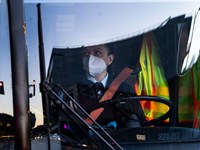 With people largely left on their own when navigating the ever-evolving guidance amid testing shortages and rising cases, figuring out what’s safe to do right now — even grocery shopping — can launch an endless set of mental gymnastics.

Dr. Kirsten Bibbins-Domingo said it’s important to think of the current environment as a “spectrum of risk.” She leads the UC San Francisco COVID-19 Community Public Health Initiative and chairs the department of epidemiology and biostatistics at UCSF.

Bibbins-Domingo talked to CapRadio about how she’s thinking about preventative measures during the omicron surge, both generally and when she has to leave the house for specific activities.

This interview was edited for length and clarity.

On her overall mindset regarding the surge

Even though I know the likelihood is all of us are going to be exposed to some extent, all of our actions play a role in making sure that wave is not quite as high as it might be if we were throwing total caution to the wind.

We're in an environment that some have taken a very fatalistic attitude toward — “Oh, everyone's going to get it, so therefore, it’s not worth doing anything.”

I think for all of those people, I would want you to keep in mind the families with children under 5, those people who are immunocompromised and have gotten three shots and are still not fully protected from the vaccine.

It is easy to say, “I'm not going to get sick myself. Everybody else should have protected themselves.”

But it’s important to remember that there are children under 5 and families who care for and live with children under 5, as well as people who are immunocompromised at any age, who the vaccines are not going to work as well [for].

We all still have a responsibility to do all we can. To put our little brick in the wall, to create some wall to protect those people for who, no matter what happens, they will continue to be at risk. The only thing we can do as a community is to try to reduce some amount of that transmission that's occurring. That is still front and center in my mind.

Any time you're leaving the house, while there's a lot of people around you who might be infected — where we are now, there’s the estimates of 1 of 10 [people] being infected — you're going to have some risk. But I feel like it's an activity that I have to be doing. I continue to go grocery shopping. I don't spend extended periods there, I have a high quality mask, I'm vaccinated and boosted. And that's an activity I’m definitely still engaging in, recognizing that I am at risk of because all of us are, at this time.

You benefit from the ventilation outdoors, you benefit from the natural distancing from other people and the ability to avoid being in large groups of people. There are many people around, even outside in the Bay Area, who certainly are wearing masks, and you can decide to put your mask on and off depending on what you're doing outside. 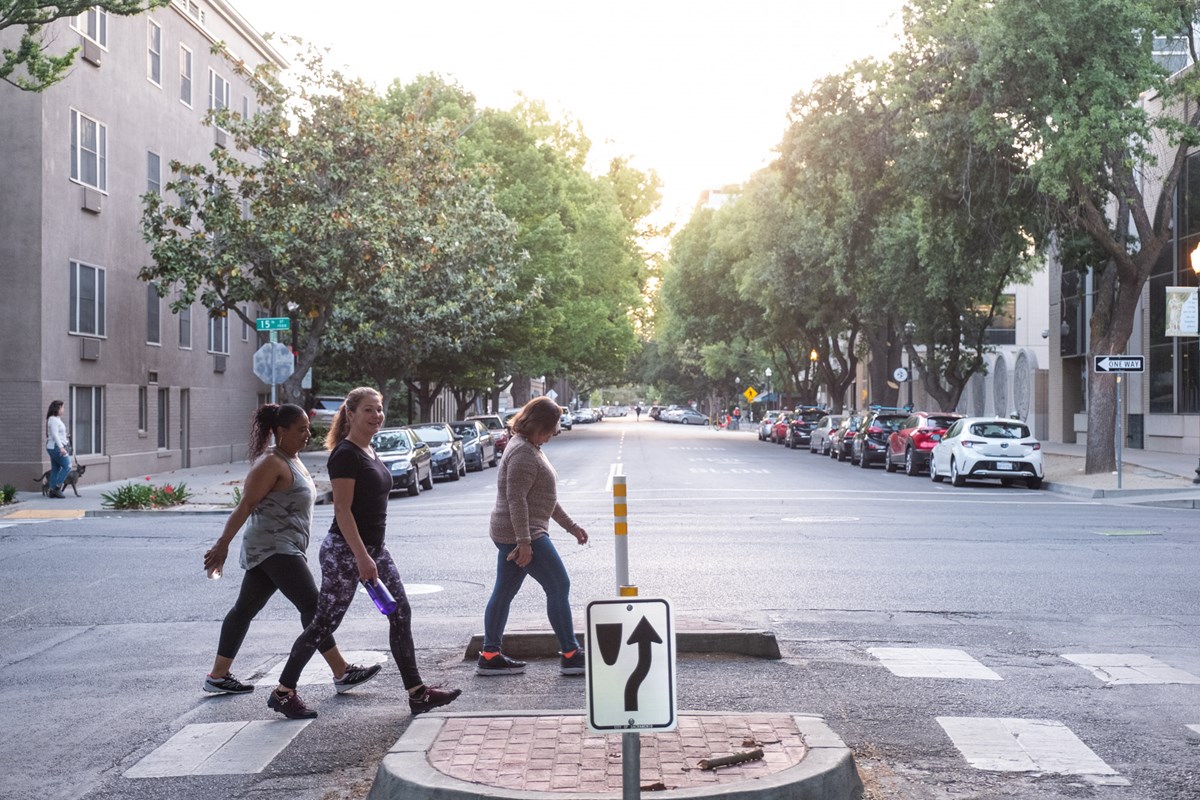 Booking a hotel room/Airbnb for a staycation: Maybe

By February, if you're in one of the urban areas in California that is already nearing the likely peak [of the omicron surge] as we get to the end of January, we're going to be in a downturn.

If you were trying to book it for Martin Luther King Jr. weekend, it is going to be far riskier than, say, February 14th, if we can judge from this.

If you're going with your family to a new environment, but you're only around the same people you are in your old environment, then the major thing that's changed is the new people you might come in contact with, and the ventilation, the masking, the other things in your control. Those are the ways I would think about it.

Attending an small indoor gathering where everyone is confirmed vaccinated: Masks on

This is all about what makes the environment risky. What's your tolerance for that risk? And how important is it that you really can't forego it for another few weeks? It's that combination of things that factor into my decision making. If I had a very important family sentimental occasion where we wanted to come together, I would do all the things — vaccination, testing, and I might still have it with, you know, a limited number of close family members.

I know we, even at UCSF, are looking to the end of January as a place that we would reintroduce small group events for teaching and other types of things.

But when you're in those environments, and you're all taking your masks off, and you're there for extended periods of time, like one does with a dinner party, those things mean you're taking away another layer of protection and that's what makes it riskier again.

Attending an indoor concert or comedy show with vaccine requirements: No

When there's so many people infected, I'm not doing the large crowds, I'm really just not doing them. Even with a vaccine or test requirement because there's just too much chance. It's just a numbers game, especially if it's a tight crowd where there's really not a lot of distancing like at a crowded concert. 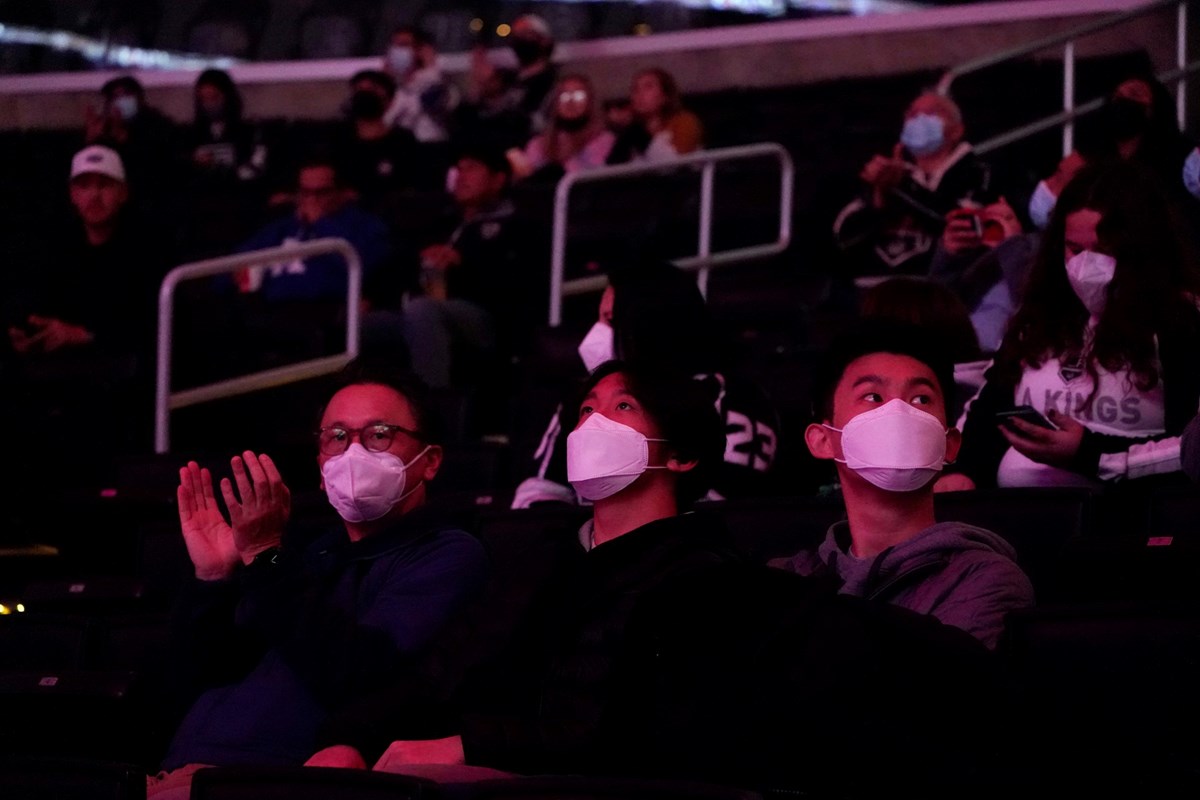 Fans wear masks inside the arena before an NHL hockey game between the Los Angeles Kings and the Nashville Predators on Thursday, Jan. 6, 2022, in Los Angeles.AP Photo/Marcio Jose Sanchez

Going to an indoor gym: No

Just every single thing about an indoor gym works against you in this environment.

You can find community walk-up testing sites in Sacramento here, and this guide walks you through frequently asked questions about COVID-19 tests.

Correction: A previous version of this article misspelled the name of Dr. Kirsten Bibbins-Domingo. It has been corrected.