No, California’s drought isn’t over. Here’s why. 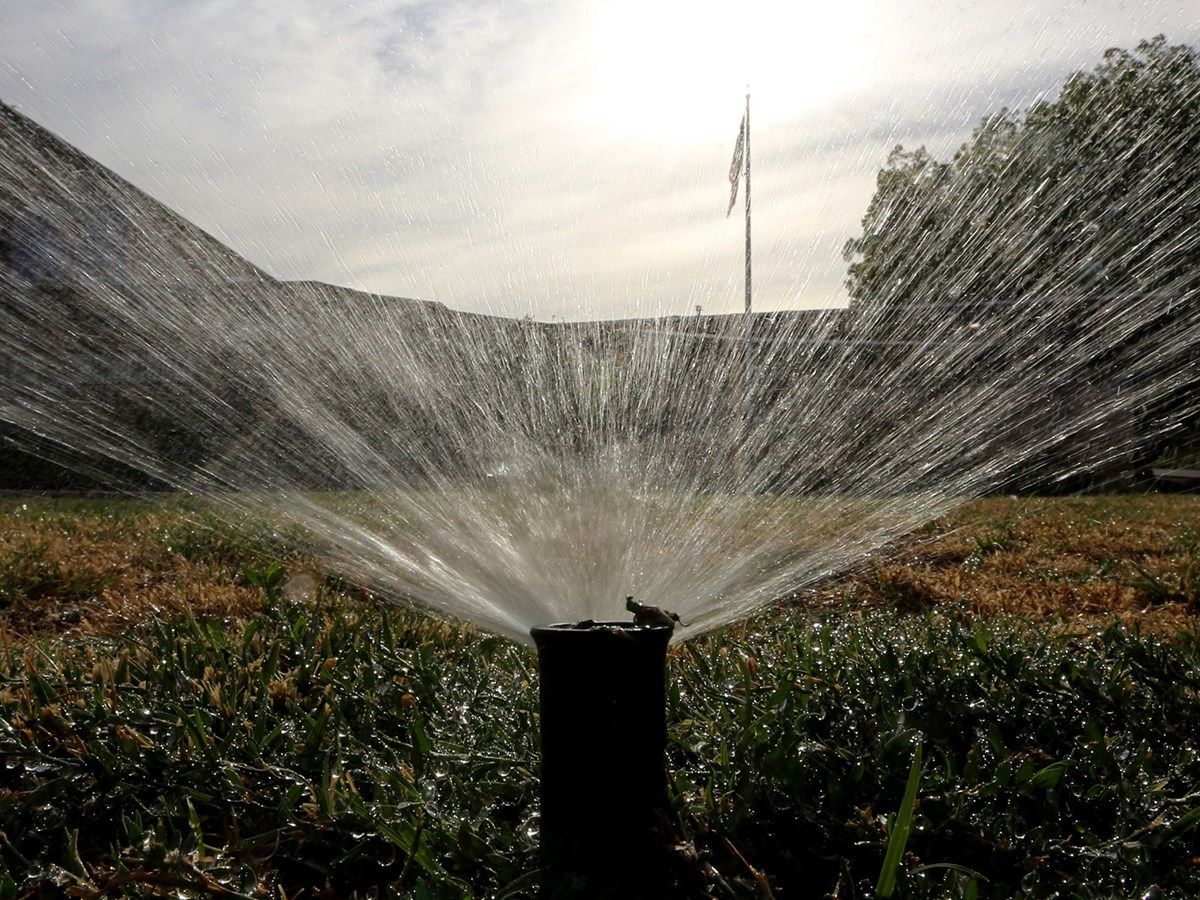 Sprinklers water a lawn in Sacramento on July 15, 2014, during the last drought.

The rules ban practices such as hosing down sidewalks and driveways with drinking water, washing cars without a shutoff nozzle on the hose and irrigating lawns and gardens too soon after rain.

Approved unanimously by the State Water Resources Control Board, the mandates could take effect as soon as Jan. 15 and have a one-year expiration date unless extended. Fines can reach as high as $500, but enforcement will be spotty: Local governments and water agencies are allowed to enforce them at their discretion, and they will largely be complaint-based.

“There’s not going to be like a statewide force of water cops or anything like that,” said Eric Oppenheimer, the water board’s chief deputy director.

California’s drought is not over despite a bounty of snowfall and rain over the past month: California’s snowpack — a critical source of water — is 150% of average for Jan. 4. But with three months left of the wet season, it’s not enough to bring an end to the severe drought and water shortages.

California still needs about another foot of snowpack by the end of March to reach its historic seasonal average, according to the state data. Almost 16 inches had accumulated by today.

“December alone will not end the drought, clearly,” said Jeanine Jones, interstate resources manager for the Department of Water Resources. “December was wonderful, but now we just hope it keeps on going.”

The amount of water now stored is actually worse than last year at this time: The state’s reservoirs in December were projected to contain about 78% of average — compared to about 82% in 2020.

Moderate to exceptional drought still grips the entire state, and a soggy start to the rainy season does not guarantee even an average water year. California has felt that false hope before: In 2013, during the last record-breaking drought, a wet December turned into a dry January and February.

Climatologists predict that the state will dry out during the rest of the winter and spring.

“After we get through this weather system this week, things go dry. And the expectations are a drier than average January, February and March,” said California’s state climatologist Michael Anderson.

And conservation still lags. California Gov. Gavin Newsom in July called for Californians to voluntarily cut water use by 15% in the face of the ongoing drought. But state officials today announced statewide savings of only 6% from July to November compared to last year.

November, a dry month, saw only a 6.8% reduction in water use — down from 13.3% in October, which saw torrential rains. The greatest savings came from the northern half of the state; water use increased slightly by 0.8% in Southern California.

“You want to kiss every snowflake and every raindrop that comes down, because it was just so bad,” said Felicia Marcus, who chaired the State Water Resources Control Board under Gov. Jerry Brown during the last drought. “At the same time, we've got to exercise our efficiency muscles every way we can, all the time.”

Similar restrictions on wasteful water use were temporarily enacted during the last drought under former Governor Jerry Brown, who also issued a statewide water conservation mandate.

In October, Newsom instructed regulators at the State Water Resources Control Board to consider once again barring wasteful water uses when he extended the drought emergency statewide.

The emergency rules adopted today take aim at residents as well as homeowners associations, which can no longer penalize residents for brown lawns and drought-tolerant landscaping plants. Local governments may no longer use drinking water to irrigate ornamental turf on street medians.

The new rules do not affect agriculture, the leading user of water in California. And both public commenters and board member Laurel Firestone raised concerns about how penalties could affect low-income Californians — spurring the board to add new language requiring warnings and fees based on the recipient’s ability to pay.

“This is not the most effective, or even in my mind appropriate policy approach to save water when we're in a drought emergency,” said board member Laurel Firestone, who called for a more systemic approach rather than individual penalties. “Unfortunately, like in the last drought, we don't have a more appropriate and effective policy developed that we go to in drought emergencies.”

But many local water agencies have already adopted their own rules.

Sacramento, for instance, has prohibited a number of wasteful water uses since 2017, including washing down sidewalks and irrigating so much that it overflows onto sidewalks or streets.

The utilities department “takes an education-first approach to solving water waste by providing notices to residents before issuing any fines,” Carlos Eliason, a spokesperson for the department, said in an email. Fines, however, can be issued to repeat offenders, and the allowable amount has doubled due to the city’s “Water Alert,” currently ranging from $50 to $1,000.

“Most of our water waste investigations are resolved by reaching out to our customers and providing education and resources, without having to resort to enforcement,” Morales said. However, she said the district can “escalate to a formal warning letter letting them know that we may charge them for additional monitoring, and that we have the right to install a flow restrictor or even shut off their water.”

“There is nothing that obligates us to take specific action and enforce" the state's new regulations, Morales said. She added, however, that the district might consider updating its rules to more closely match the state’s wording.

Officials couldn’t say how much water the regulations adopted today are expected to save. Instead, they said, the focus is largely on educating consumers, rather than collecting fines.

“I don't believe that there were any fines of up to $500. There were, I believe, a small handful throughout the state of smaller fines after multiple levels of warnings and outreach,” said David Rose, senior staff counsel with the water board. “Mostly what the suppliers chose to do was to implement their own existing water waste or water use restrictions as opposed to the board's regulation.”

The timing of the decision after such a soggy start to the water year “wreaks havoc with messaging,” Marcus said.

But it’s a change that she said she hopes will persist longer term — which would require a different regulatory process.

“To me, these rules are sort of the least we can do. They're primarily common sense.”

Julie Cart contributed to this story.