With COVID-19 again surging in the U.S. because of the omicron variant, President Biden announced several new steps to address the risks posed by the highly contagious variant.

Saying he understands "how tired, worried and frustrated you are," Biden outlined his administration's latest approach to deal with the virus that has taken some 800,000 lives in the U.S.

Most notably, the government plans to buy a half-billion at-home COVID test kits and mail them to people who want them, with deliveries beginning in January.

It's a major step to tackling problems Americans have faced in easily accessing free at-home COVID tests throughout the pandemic.

Biden sought to assure Americans who are vaccinated and boosted that they have a high degree of protection against severe illness. But he will also make it clear that it will not be unusual for vaccinated people to get COVID-19 because of the new variant and that they will likely experience no symptoms or mild symptoms.

"They should feel comfortable celebrating Christmas and the holidays as they planned," the administration official said, noting people should take regular precautions like wearing masks during travel.

"This is not a speech about locking the country down. This is a speech outlining and being direct and clear with the American people about the benefits of being vaccinated, the steps we're going to take to increase access and to increase testing, and the risks posed to unvaccinated individuals," she said.

On Monday, the omicron variant became the most dominant version of the coronavirus in the U.S. and cases continued to rise as Americans prepared for their Christmas holiday later this week.

But with so many new cases, Americans faced problems in accessing affordable COVID-19 tests.

New Yorkers hit the streets over the weekend trying to get tested but encountered long lines in the cold. The wait at a city-run testing and vaccination center in Times Square on Saturday afternoon was reportedly about three hours. 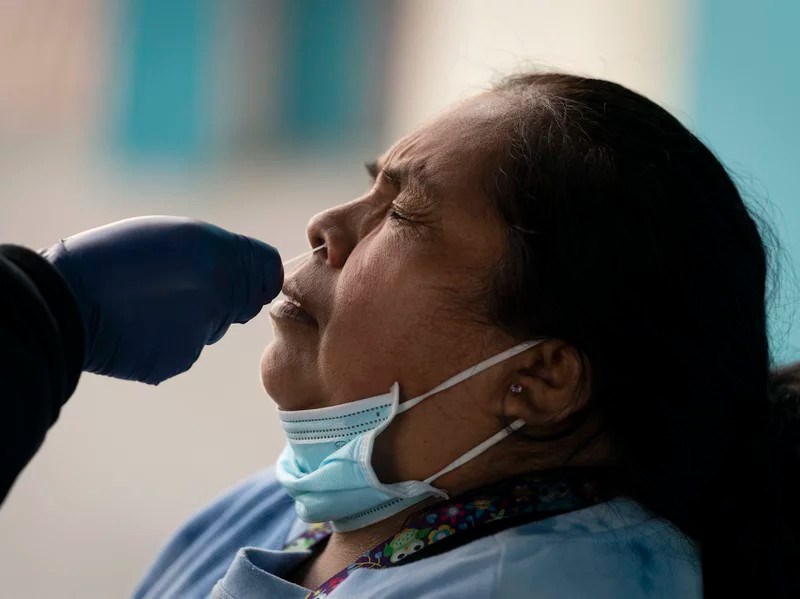 Leticia Lopez is tested for COVID-19 at a pop-up testing and vaccination site outside a swap meet in Los Angeles last week.Jae C. Hong/AP

The U.S. government wants to change that.

The federal government will announce new federal testing sites across the country, including one in New York City that will open before Christmas.

In January, the government will also start a website where people can order at-home tests to be delivered for free. This will augment plans announced earlier this month to require private insurance companies to reimburse people for the tests.

Biden will also continue using the Defense Production Act and other powers to make sure the U.S. is producing as many tests as quickly as possible.

These are all steps the administration should have made a while ago, said Dr. Robert M. Wachter, a professor and chairman of the Department of Medicine at the University of California, San Francisco.

Testing will only become more important as the U.S. continues to power through this surge, Wachter told NPR.

"It just needs to be freely available in the same way that vaccines have been," he said of COVID-19 tests. "So that part is great. But because they are just starting now, it's going to be a little bit late."

Wachter said it will take some time for the government to gear up production and mail them out.

"Omicron is going to peak by mid-January, so it may miss a fair amount of this surge," he said. "But better late than never. We have no idea how long this surge will last. This surge could go on for a couple of months."

Dr. Carlos del Rio, the executive associate dean of the Emory School of Medicine & Grady Health System, calls the move "a step in the right direction," but warns that it falls short.

He also insists that the U.S. needs a nationwide mask mandate.

Like other physicians contacted by NPR, Dr. Leana Wen doesn't think 500 million tests will be enough.

"Half a billion, though impressive-sounding, does not come even close to what's needed," she says.

Wen, an emergency physician and professor of health policy and management at George Washington University, says the Biden administration needs to provide enough tests "for all American families to be able to test twice a week, every week."

"It needs to become the norm to test before going to school and work, and before families and friends have dinner together," she says.

As part of this multipronged effort, the Federal Emergency Management Agency is deploying planning officials to assess needs across the country and preposition supplies like masks, gloves and ventilators.

The president will announce that FEMA is standing up new pop-up vaccination clinics across the country. There are plans so far for a new mobile unit in Washington, D.C., and four new mobile units across New Mexico. FEMA will help set up additional sites in areas of high demand over the coming weeks. 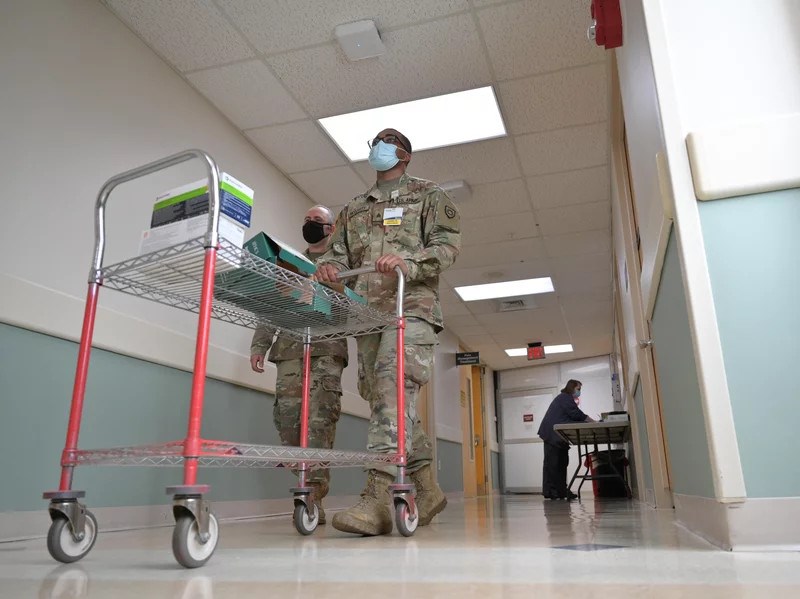 Biden will also announce plans to beef up support for hospitals seeing high numbers of unvaccinated people who get sick from COVID.

The government will send ambulances and EMS workers to hot spots to help move people to places where there are open beds. Defense Secretary Lloyd Austin will mobilize 1,000 doctors, nurses, medics and other military medical personnel to deploy to hospitals in January and February.

For Wachter, this number of medical personnel feels like a "drop in the bucket."

"Starting with that number will be fine, but if it turns out to be woefully inaccurate, then everyone will be scrambling," he said. "It's going to be a bit of a free-for-all to figure out how we staff hospitals. If this hits hard, I doubt this will suffice."

The U.S.'s hard-hit areas will get a proper sense of what is needed in terms of additional medical personnel in a week or two, Wachter said.