With no exit strategy, Sacramento will keep Roomkey motels for homeless residents open through March 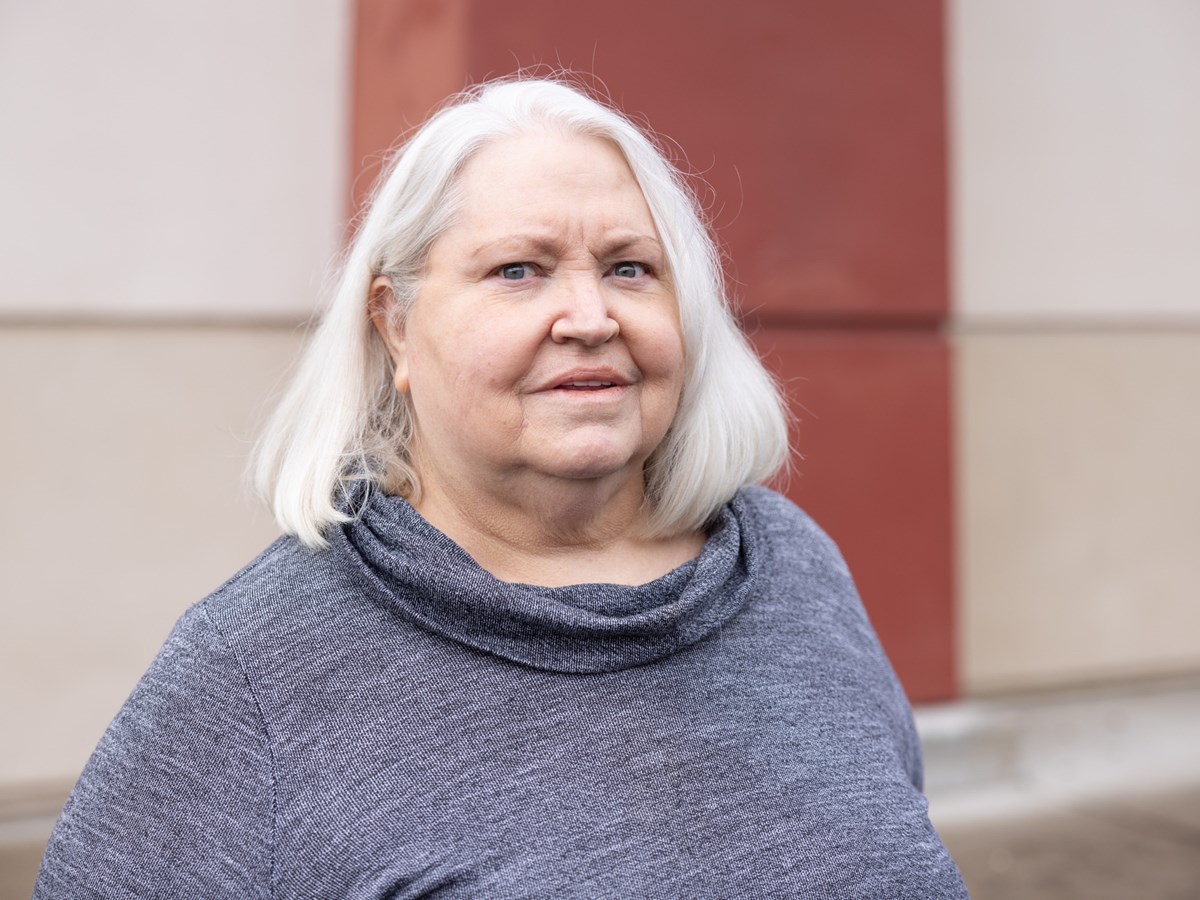 Karen Clark at a shopping center near her Project Roomkey home, Thursday, Dec. 9, 2021.

Karen Clark, 68, hasn’t had a permanent home in four years. For the past 20 months, she’s lived in a Rancho Cordova motel room through a statewide homelessness program called Project Roomkey.

Clark, a Vacaville native who has severe health problems, says the motel has “helped keep me alive” during the pandemic. But it’s come with challenges.

“One of the toughest parts I’ve been dealing with is the isolation,” Clark said, explaining the only visitor she’s been allowed is her county-assigned caseworker twice per month.

The former paralegal said she may not find a larger, stable home soon, but at least she’ll have her hotel room when the cold winter months arrive. 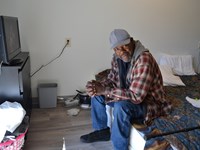 Sacramento County officials have extended Roomkey through at least March — largely because they don’t have an exit plan for the expensive program, county officials told CapRadio this week. They’ll keep it open for the nearly 300 homeless residents still living at three hotel and motel sites across the region.

In August, the Sacramento County Board of Supervisors used $5.3 million in state funds to extend the program through Nov. 31. At that time, the board gave county officials the authority to seek more money to continue the program further.

While that’s good news for Clark, she says she’s eager to move on after such a long stay.

The motel is not luxury living: Clark relies on a mini-fridge and microwave for cooking. She uses her bathroom sink to clean dishes.

“I refer to this as hotel jail,” Clark added. “I’ve found that once you get labeled homeless, you’re viewed as being part of almost like a criminal element. They don’t trust us with our own room key.”

Since last April, Roomkey has provided rooms, meals and medical care to tens of thousands of California’s most vulnerable homeless residents. It’s won praise from advocates and lawmakers for keeping unhoused residents largely safe from COVID-19.

Some participants, however, say the program’s visitation, security and curfew rules are strict, while promises to help find housing have gone unfulfilled.

‘Not a sustainable model’

In Sacramento County, Roomkey had provided rooms for about 1,800 people as of late November, according to county figures. Of those, 710 had moved to permanent or temporary housing — up from 454 in August.

Meanwhile, 499 had gone to “unknown destinations,” meaning they left without saying where they were going.

Many are presumed to have gone back to living on the streets. Still, others ended up in institutions such as jail, or mental health and rehabilitation centers.

County spokesperson Janna Haynes says the goal is to connect all Roomkey residents with housing, both for their stability and because the program is so expensive. It costs nearly $4,000 per room monthly, after rent, meals, security, laundry and medical expenses are tallied, she said.

“It’s not a sustainable model. Funding is a huge challenge,” Haynes added. “The Sacramento County Board of Supervisors has extended the program several times and gave county officials the authority this summer to seek funding to keep it going through at least March.

“We don’t want to exit anyone out to the street,” she added.

Continuing the program is important, but so is finding the right housing for those remaining, said Faye Wilson Kennedy, co-chair of the Sacramento Poor People’s Campaign. She said many unhoused people don’t want to live in congregate shelters and do best in small, private rooms or apartments.

Unhoused families with children may need a larger home, she added. 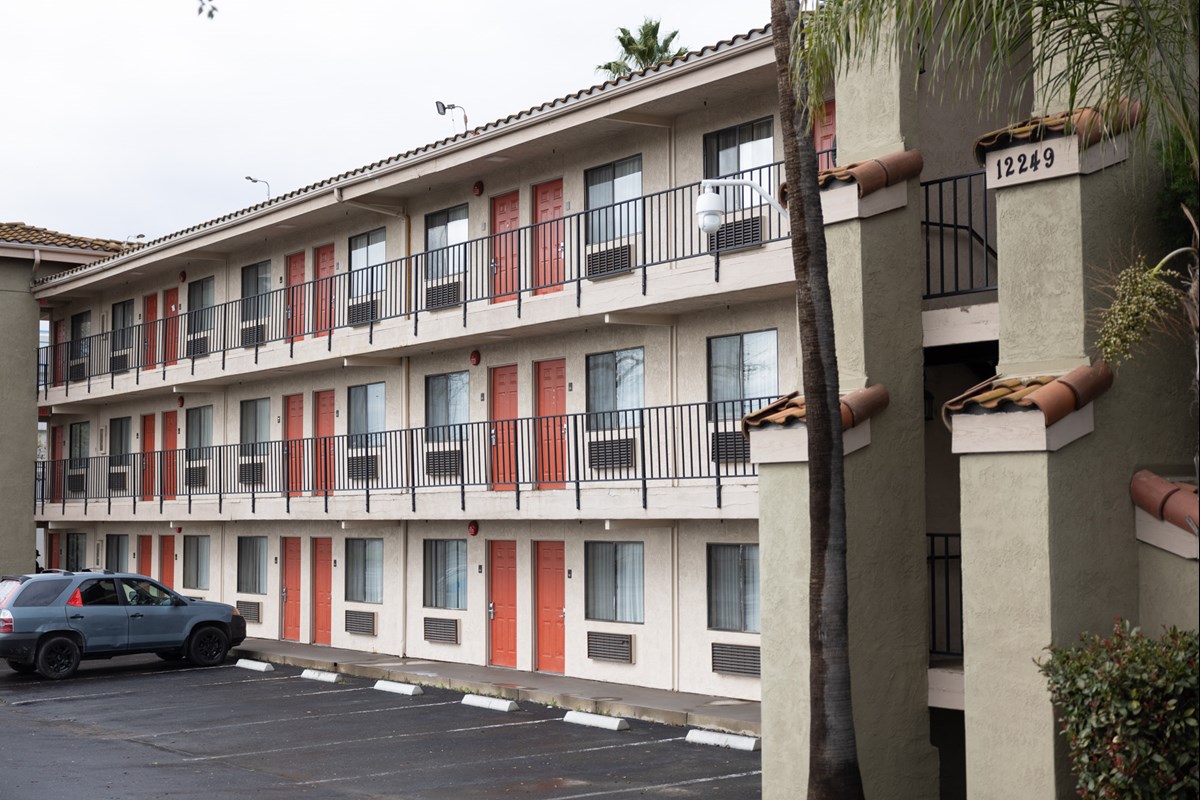 A motel in Rancho Cordova that is being used as housing for Project Roomkey, Thursday, Dec 9 , 2021.Andrew Nixon / CapRadio

Homeless advocates and business groups are watching closely as the county winds down Roomkey. They want people housed and don’t want a haphazard end.

Jenna Abbott, executive director of the River District Business Association, said having a Roomkey motel in her neighborhood has been difficult. The site — which is in an area with large number of unhoused people — has drawn family and friends of Roomkey residents who haven’t been housed but “camp close to that hotel,” some with the goal of gaining a room, Abbott said.

That’s led to more loitering, public drunkenness and trash outside the restaurants, gas stations and other businesses in the area, she added.

“The business district was struggling with how to manage the compassion of making sure that people are housed and comfortable, with making sure businesses can operate and keep going through what was a very difficult time during COVID,” said Abbott.

She asked county officials in August to provide more specifics about their “exit strategy” for the program.

“As of today, we don’t have an exit plan,” Ethan Dye, the county’s director of human assistance, which oversees Roomkey, told county supervisors at the Aug. 10 meeting.

Haynes, the county spokesperson, said this week officials are hopeful they’ll find housing for more residents in the winter. But it won’t be simple, she said.

Further complicating the search for housing, some residents have bad credit, no documentation to secure a job or lease or a criminal record, Haynes said.

Asked for more specifics about Roomkey’s eventual end, Haynes wrote in an email: “We are still in the process of drafting the exit strategy and are not prepared to discuss it at this time.”

“You can’t just open the door and put people back out” on the street, she told CapRadio this week.

Clark, the Roomkey resident, said she’s fortunate because she still has health insurance and a car to drive herself to appointments. She said she was recently diagnosed with kidney disease, but at this point doesn’t need a home with comprehensive services.

A place with a real kitchen would be nice, she added.

Unhoused residents must be referred to Roomkey by a service provider and can call 211 for more information about the program. Priority is given to older residents with health problems. Some rooms have been set aside as isolation units for unhoused people who test positive for COVID-19.