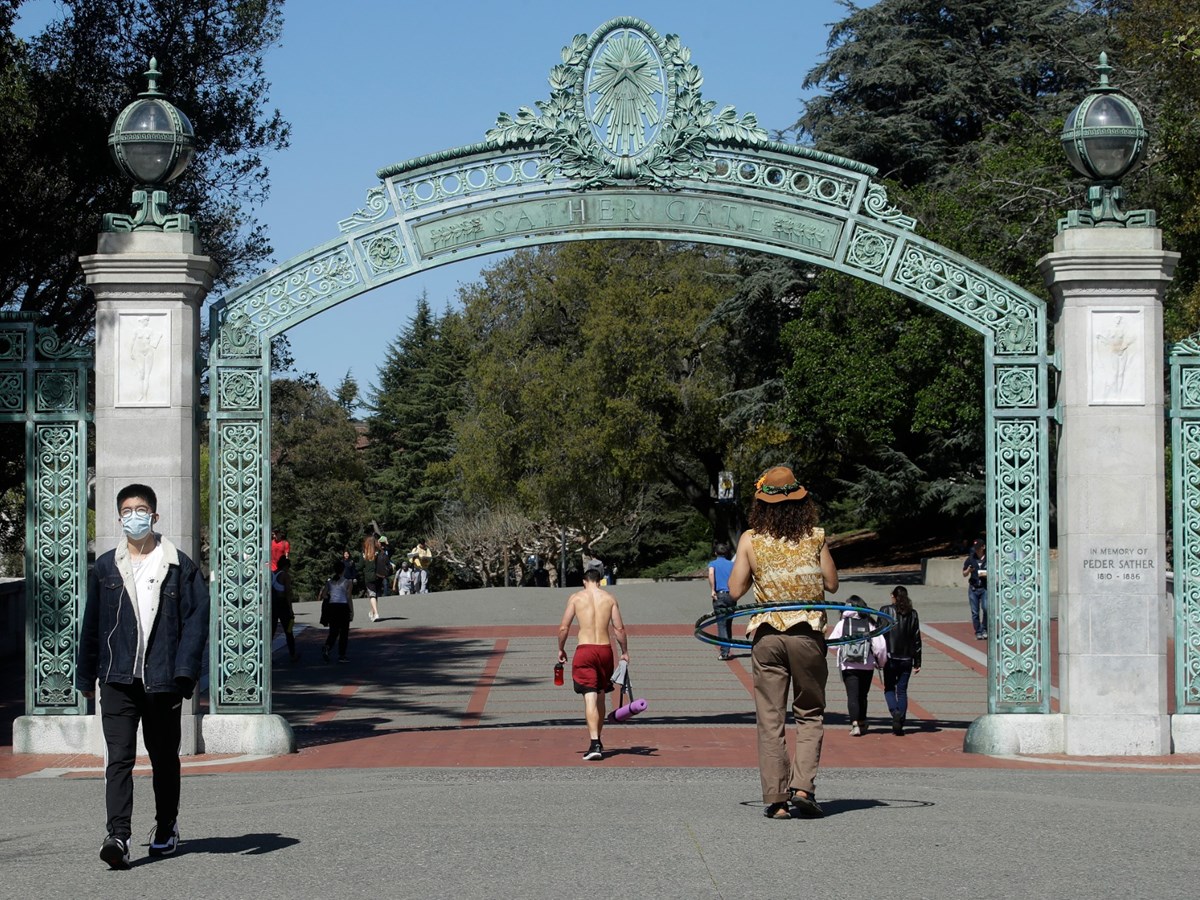 A man wears a mask while walking past Sather Gate on the University of California at Berkeley campus in Berkeley, Calif., Wednesday, March 11, 2020.

The University of California will not require any kind of admissions test for students trying to gain entry as undergraduates, system leaders reiterated Thursday.

Though the system voted last year to do away with requiring the SAT and ACT admissions tests, still up in the air was whether the UC would decide to use any other test.

Signs already strongly suggested that the answer was no. A December 2020 report and more recent September report stated that creating a new test and using an existing assessment 11th graders have to take already aren’t feasible. On Thursday, UC leaders reaffirmed that the system will be test-free for undergraduate admissions going forward.

“We don’t have an assessment now that we believe we can use effectively,” said UC President Michael Drake at Thursday’s UC Board of Regents meeting.

The Board of Regents agreed with the move, said its chair, Cecilia Estolano. “We reached a conclusive decision that there isn’t right now a test or an assessment that we feel comfortable using in our admissions process.”

“This will have national implications,” she added.

The SAT and ACT have long been the focus of critics who say they are racially biased and give a leg up to wealthier students whose families can afford pricey test preparation.

Having no testing requirement is also seen as one reason why the UC admitted its most diverse class for this fall, according to a July press statement from President Drake’s office. The number of low-income students who were admitted to a UC campus jumped by 10% since 2020.

How we got here

The creation of a new test is out of the question because it would take too long to develop, a December 2020 academic report to the UC Office of the President said. The Board of Regents’ vote last year to get rid of the SAT included the possibility of having a replacement test by 2024. But another academic report indicated creating a new test would take nine years. In effect, the Board of Regents’ tight deadline ruled out a new test, the December 2020 report said.

The UC’s focus then shifted to using an existing test called Smarter Balanced. It’s an assessment federal law requires that California public school students take for free in classrooms in grades 3 through 8 and 11. Unlike the SAT, though, the Smarter Balanced isn’t a “high stakes” test that determines a student’s academic fate. It’s chiefly used by state and district officials to measure whether students are making academic progress. Generally, it’s not a test K-12 students stress over.

After months of meetings, a working group of the UC Academic Senate recommended in September that the UC not adopt the test for admissions. Its report said overhauling the Smarter Balanced assessment as an admissions test would just recreate the same issues that prompted the UC Board of Regents to get rid of the SAT and ACT.

For one, using it for admissions would turn the Smarter Balanced assessment into a major source of anxiety for students given its sudden high-stakes nature. Next, making Smarter Balanced an admissions tool would create a new marketplace for test-prep, which the Academic Senate group said would result in wealthier families hiring tutors and purchasing other materials to give their students a leg up.

Overall, Smarter Balanced “captures the inequities in opportunities to learn across California schools that are pronounced by race and socioeconomic status,” the Academic Senate group’s September report said.

Are admissions tests at the UC gone forever?

Could the UC change its stance and adopt an admissions test again? Maybe, Drake said. If a test comes along and “does what we believe it should do in a way that we believe it’s effective, we certainly could consider adopting such a thing in the future.”

At least one Regent thought keeping the door slightly open for another testing requirement is ill-advised, given how much work is required to overhaul admissions requirements.

“We would have to rewrite our entire admissions system again,” said Alexis Atsilvsgi Zaragoza, a Berkeley student and Regents member, who noted that admissions offices at the UC scrambled to adjust their criteria for letting students in after the Regents removed the SAT requirement.

More work for admissions offices without a test

Still, without a test, admitting students becomes more challenging because of the workload it represents for admissions officers, Estolano said. That the UC ditched the SAT has already led to record-level applications to the system. For fall 2021, the first season after the UC dropped its testing requirement, the UC received more than 200,000 applications, compared with 172,000 in 2020.

Training admissions office staff on the “comprehensive review” process that looks at grades, extra-curriculars, the socio-economic factors in which students grow up and other non-test criteria becomes even more important, Estolano said.

Relying more on artificial intelligence may be one way to help with the workload. A report to the Regents this week noted that AI plays a small part in admissions and financial aid decisions at campuses, but its role could be expanded. “Algorithms could be employed to create a predictive score for each applicant, a process that could help to supplement evaluation by admissions staff,” the report said.

But there are pitfalls to that approach, the report cautioned.

“However, the potential for adverse outcomes or unintended consequences can be ingrained in AI-enabled tools if they draw on outdated training data or data that is incomplete or unrepresentative of a broad demographic.”