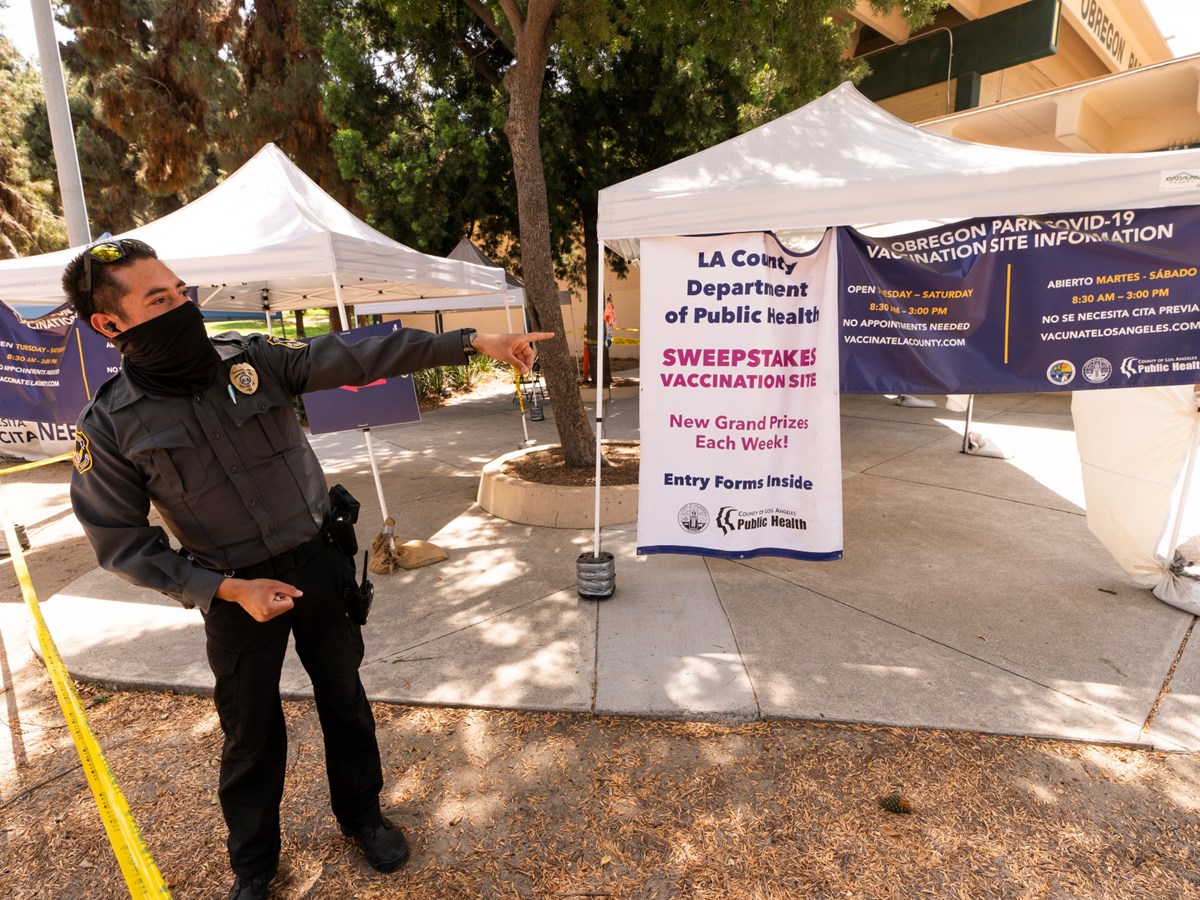 A private security guard gives directions to people looking to get vaccinated, at the Eugene A. Obregon Park in Los Angeles Thursday, July 22, 2021.

Security guards in California will soon be required to complete training on when and how to use force before obtaining a license.

The legislation was inspired by an investigation CapRadio published last year. It found California’s regulations provide no clear definition or training requirements for appropriate use-of-force in the private security industry.

“I read the article and was like, ‘Oh my goodness,’” said Willie Armstrong, chief of staff to Assemblyman Chris Holden, a Democrat who introduced the legislation. “I took the idea to Mr. Holden, and he said, ‘Yeah, we have to do something about this.’”

The law requires the California Bureau of Security and Investigative Services, which regulates the private security industry, to develop a use-of-force standard for the industry and a training curriculum by 2023.

Security guards and so-called “proprietary private security officers” — such as bouncers at a bar — must then complete the training in order to obtain a license. The law also tightens requirements for security companies to report physical altercations to the bureau, and gives regulators more power to suspend or revoke a license due to excessive force.

“This is an important piece of legislation that will go a long way to protect innocent lives,” said Joseph Jaksa, a professor of criminal justice at Saginaw Valley State University with more than two decades of experience in the private security industry.

CapRadio’s investigation focused on a 2019 incident at the Golden1 Center in downtown Sacramento. Mario Matthews, 39, entered the arena around 3:30 a.m. as custodial staff cleaned the building. Security guards pursued Matthews and restrained him on the ground in a hallway leading to the visitor’s locker room. A toxicology report later determined Matthews, who weighed 125 pounds, had methamphetamine in his system.

One of the guards pressed his knee to Matthews’ neck for more than four minutes, according to a review of publicly released security footage and a federal lawsuit filed by his family. The suit alleges Matthews suffered head injuries and fell unconscious as the guards, and later police, restrained him. He died two days later at a local hospital.

The incident underscored California’s murky regulations when it comes to use of force and private security.

Lynne Jensen Andres, who leads the Bureau of Security and Investigative Services, previously told CapRadio in an email that “situations involving the use of force are not clearly defined in statute.”

The lack of a clear definition has not only led to inconsistent training, it also limits the bureau’s ability to discipline guards who use too much force. Under existing laws, the bureau could forward a case to the state attorney general if it believed a guard committed a criminal act, but could not take punitive action on its own.

The only action the bureau took in connection to Matthews’ death, for example, occurred five months later, when it fined the security company $2,500 for failing to report the incident.

California’s new law gives the bureau authority to suspend or revoke a license if a guard violates the state’s new use-of-force definition.

Holden has helped spearhead the Legislature’s recent efforts to reform use of force in policing. He said he was surprised by the lack of regulations when it came to private security, since guards have frequent contact with the public.

“Many people thought private security guards were trained in how to engage in use of force,” he said. “So this was one of those situations where a law was necessary, and it won support even amongst the security industry.”

According to Jaksa, “the key going forward is consistent enforcement of the law” and ensuring that the training curriculum is comprehensible, and applicable, for the broad range of security officers working in California.