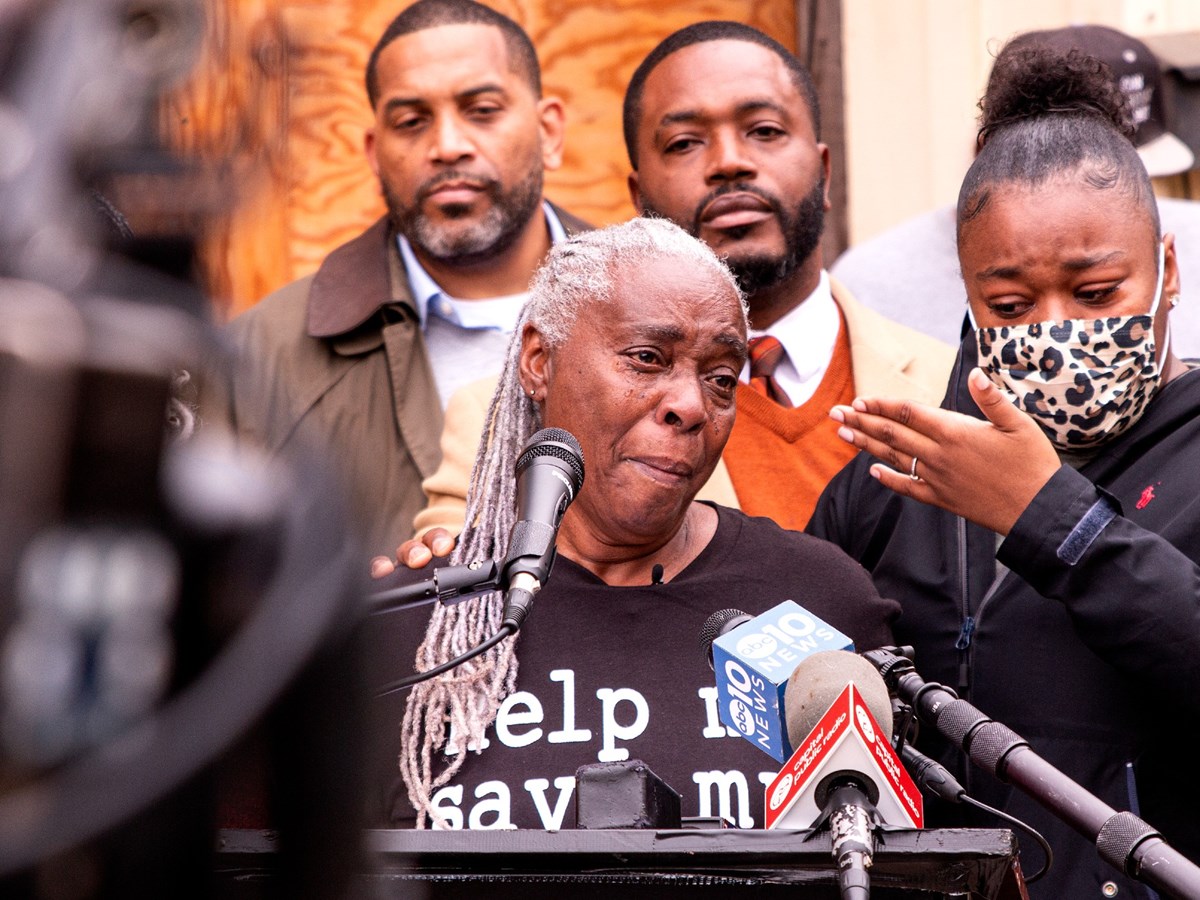 Wanda Clark, 71, stood in the driveway of her Oak Park home surrounded by family as she spoke about her fight to keep her house during a press conference on Oct. 20, 2021.

Wanda Clark stood in the driveway of her Oak Park home on Wednesday morning surrounded by family as she held back tears. The 71-year-old is fighting to keep the house she’s owned since 1995. But because of unfinished construction and repairs, it could be sold without her approval.

“We're trying to ask that they do not sell my home away from me, because I don't want to feel like — I don't want to be homeless,” Clark said through tears at a press conference, joined by community members and organizations trying to help. “I want to spend my best days in my home.”

The house has sat vacant for two years and has seen better days. In 2005, Clark says she took out a loan to add two bedrooms and a bathroom on top of her garage. Her daughter’s husband was killed, and she wanted to give her family a place to live.

But she says the contractor took off with the money before completing the renovation. The addition on top of the garage sat bare for more than a decade, with the roof incomplete and wood frame exposed to the weather.

Clark, who works as a janitor for Sacramento County, lived with the property like that for years, saying she never missed a mortgage payment. She said the contractor later died, and she never saw a dime.

In April 2019, the city said it boarded up the home and that the Sacramento Municipal Utilities District shut off the power because of the property’s “dangerous condition and structural damage.” Last October, the city told Clark it would move to appoint a “receiver,” or someone to legally oversee the property in lieu of Clark. But it held off, telling her instead to submit building plans to complete the renovation.

That didn’t happen, according to the city, and in April the courts appointed a receiver, who filed paperwork to put the home on the market. There’s now a “for sale” sign in the front yard. 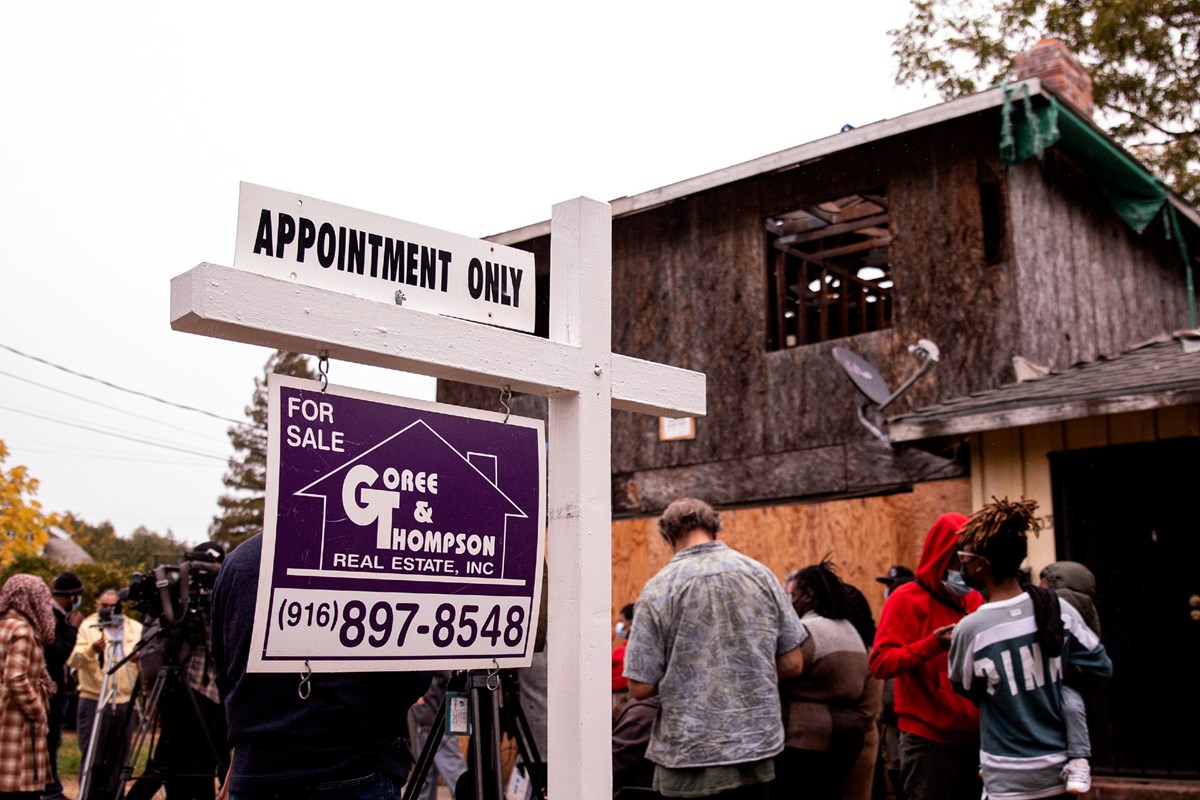 Community members and organizations stood with Wanda Clark, 71, and her family in the driveway of her Oak Park home as she spoke about her fight to keep her house during a press conference on Oct. 20, 2021.Kris Hooks / CapRadio

On Wednesday, several Sacramento organizations — including the Sacramento NAACP, the local Habitat for Humanity group, the Sacramento-Sierra Building Trades, Sacramento Area Congregations Together and more — spoke in the driveway of her former home.

Clark has been living on her sister’s couch across the street from her home since 2019.

Her younger sister Terri Austin said there has been work done to the house over the years, including new kitchen flooring and updating the bathroom, but nothing to the unfinished structure atop the garage because of the cost.

She says she’s witnessed her sister stress to the point of extreme weight loss, as she works extra hours to find a way to save her home.

“It is going to be impossible for my sister to watch other people move in here,” Austin said. “That’s gonna take her life.”

Terri Austin gives a tour of her sister Wanda Clark’s home, which has sat vacant for years. Clark has been fighting to keep the house she’s owned since 1995. But because of unfinished construction and repairs, it could be sold without her approval.Kris Hooks / CapRadio

Peter Lemos, Sacramento’s code compliance chief, said in a statement that the city has worked with Clark for years, even waiving thousands of dollars in fees levied against her.

“Unfortunately, the house remains in a dangerous condition both to the property owner and the neighborhood,” Lemos said.

He says that, in addition to structural issues and toxic mold, there has been “illegal activity” at the home.

“At this phase, the Court has ruled that the house should be put into receivership. Nevertheless, the City remains committed to continuing its work to help secure a positive outcome for the property owner,” Lemos said.

Clark and her family insist there has been nothing unlawful at her house.

In the 10 years since that first meeting, Trapini said the city was in contact “at least 40 times to assist [Clark] in making the property safe and bringing it back into compliance.”

And it appears the city will attempt to keep working with Clark.

Betty Williams with the Sacramento NAACP said at the Wednesday press conference that she spoke with City Manager Howard Chan, who agreed to meet with Clark to find a way to solve the issue.

City spokesperson Tim Swanson said that Chan agreed to meet with the NAACP and Clark.

“This is a shame. It shouldn't have taken this for us to come together to make this happen,” Williams said.

As Clark continues to watch her home of 25 years sit empty and boarded up, she’s pessimistic with little hope to save a property that she desperately wants to keep.

“I'm still fighting to stay in my home. That's my goal — to stay at my home,” Clark said. “Not to have to walk away and watch people run in and out of my house, because they want to sell my property from underneath because they feel like I'm not worthy of them to fix my home.”