Water is scarce in California. But farmers have found ways to store it underground

Aaron Fukuda, general manager of Tulare Irrigation District, stands in a basin that's designed to capture floodwater so that it can replenish depleted aquifers.

Aaron Fukuda admits that the 15-acre sunken field behind his office doesn't look like much.

It's basically a big, wide hole in the ground behind the headquarters of the Tulare Irrigation District, in the southern part of California's fertile Central Valley. But "for a water resources nerd like myself, it's a sexy, sexy piece of infrastructure," says Fukuda, the district's general manager.

This earthen basin could be the key to survival for an agricultural community that delivers huge quantities of vegetables, fruit and nuts to the rest of the country — but is running short of water. The basin just needs California's rivers to rise and flood it.

When rains come in the winter and swell the rivers, Fukuda and his colleagues open some gates and send water through irrigation canals to fill this basin and lots of others they've set up. That captured water will seep into the ground, eventually finding its way to a natural aquifer system hundreds of feet below. 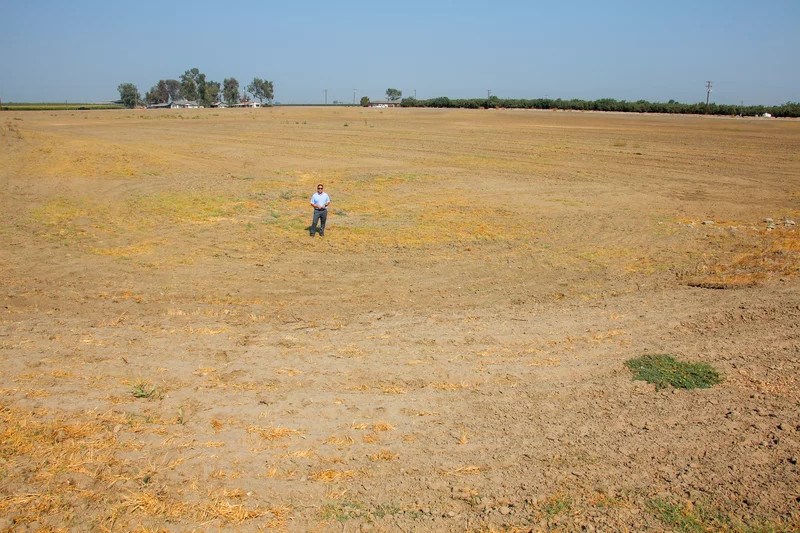 Replenishing underground aquifers, Fukuda says, is a key to the survival of agriculture in this part of California's Central Valley.Dan Charles/NPR

Water underground has become a scarce and regulated asset in the state. Farmers have pumped so much water from aquifers in this part of California that they've become depleted, threatening water supplies for agriculture and communities that depend on wells for their household water. A 7-year-old law, just now taking effect, strictly limits the amount that farmers can pump from those aquifers, and those limits could put some farmers out of business.

Water-capturing basins like this one, however, offer farmers a way to survive. That's because the new law treats the underground aquifer like a bank account. If farmers deposit water into that account when water is plentiful, they can draw more water out when they need it, in years of drought. "It really is the difference between our community surviving and not," Fukuda says.

Floods are going from nuisance to lifeline

In the past, many Californians considered the winter floods a nuisance, Fukuda says. Now, that has now changed completely. "It's liquid gold," he says. "Cold, crisp floodwater is gold these days."

Farmers and water managers in the southern part of the Central Valley, where the water problem is most severe, are grasping at the water banking idea like a lifeline. Jon Reiter, a rancher and water consultant, works with some of them.

He shows me a field of grapes, destined to become raisins. The soil is sandy and looks as if it could absorb any water that landed here. There's an embankment around three sides of the field already. "You could imagine how much water you could store in the ground in a location like this," Reiter says.

The owner of this field, he says, "has made the determination that he would be willing to actually remove the raisins" and use the land instead to capture water. The water he would "sink" might be more valuable to him than his raisin crop because it could earn him the right to pump more water from the aquifer during a future drought to irrigate other fields. 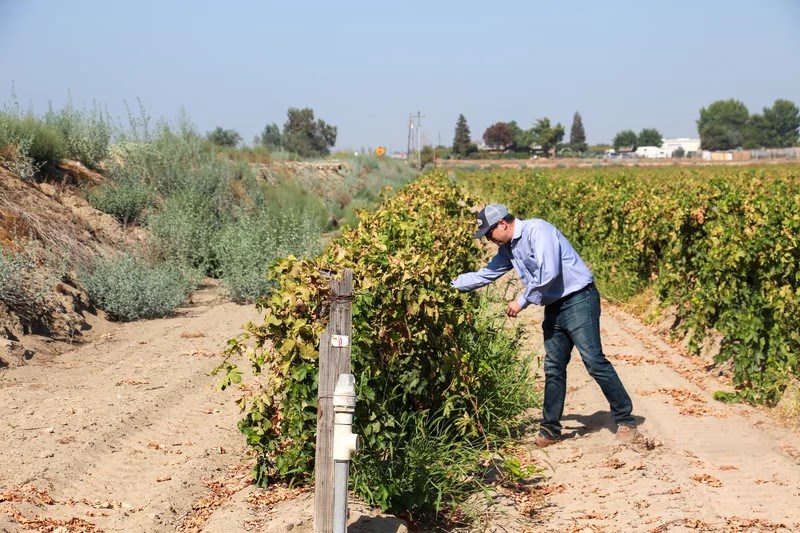 Jon Reiter, an adviser to several agricultural companies, checks out a vineyard that the owner could convert into a site to capture and store water.Dan Charles/NPR

Don Cameron, the owner of Terranova Ranch near Helm, Calif., has even bigger ambitions. Cameron's farm relies almost entirely on groundwater. He's been watching the underground water level fall for years and worrying about the future.

Ten years ago, during a winter with lots of rain, he decided to flood some vineyards and orchards, to see if he could replenish the aquifer without even clearing land for a dedicated "recharge basin." "A lot of people were skeptical, our neighbors especially," Cameron says. "I mean, they thought we were crazy. That we were going to kill our vineyard."

In fact, the grapevines and trees survived just fine, and the experiment boosted groundwater levels below his field. Further experiments, some carried out in collaboration with researchers at the University of California, Davis, confirmed the feasibility of this "on-farm recharge." Now Cameron is persuading his neighbors to do the same thing. Together, they could potentially flood tens of thousands of acres.

This is only possible, though, because Cameron happens to be in a fortunate location, right next to a branch of the Kings River, which in turn is connected to a big canal that's a major artery in California's vast water distribution system. That channel is bone-dry at the moment, but in years of heavy rains, it can fill with water. Many other farmers who are dependent on groundwater, and who will be hit hardest by the new law limiting its use, can't make "deposits" in their underground bank account because they have no access to floodwater. They're not connected to the network of ditches and canals that would be needed to carry floodwaters to their fields. 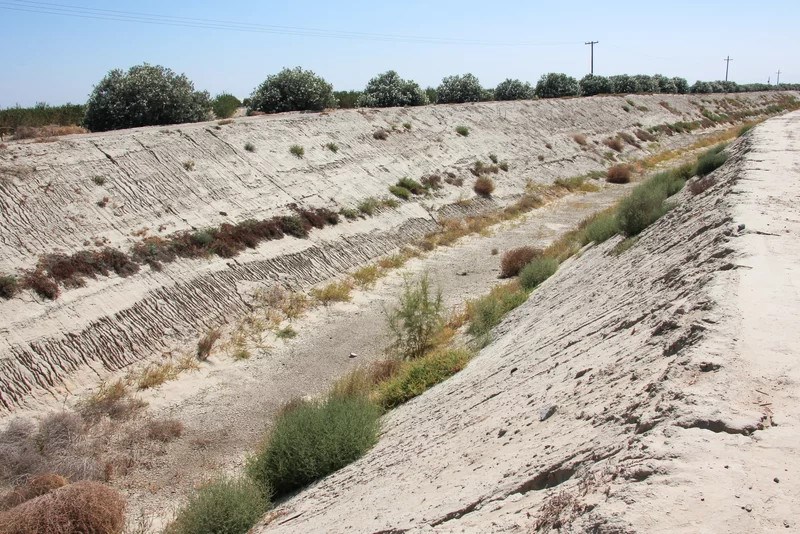 This newly constructed canal near Helm, Calif. is waiting for the next flood. Don Cameron built it, with help from the state, to carry excess water from the Kings River to nearby fields. Dan Charles/NPR

All that Cameron needs is for Mother Nature to deliver a flood. "I know we'll have another one," he says. "There is no doubt in my mind that we will flood again. We may even see more severe flooding in the future."

Climate experts agree that this is likely. In the past, California relied on precipitation arriving as snow in the Sierra Nevada mountains. The high-altitude snowpack acted as a giant reservoir, releasing water into rivers slowly as it melted. In the future, more of that water will arrive as rain, flooding quickly into rivers. The biggest reservoir available to store it may turn out to be underground, in the aquifer that California's farmers have drained for most of the past century.

Will this solution fall short?

This won't solve all of the Central Valley's water problems, though. For one thing, there still won't be enough water available to fully recharge the aquifers. Aggressively capturing and storing floodwaters could make up for 40% to 50% of the current groundwater deficit at best, according to Reiter.

In addition, recharging the aquifer could have mixed effects on the Central Valley's other big groundwater problem: contamination of wells with agricultural chemicals. These include nitrates from fertilizer and cattle waste. The problem is most severe for low-income communities that rely on shallow wells for household water use.

Flooding more land probably will flush those agricultural pollutants into aquifers, says Helen Dahlke, a hydrologist at the University of California, Davis. "We often see a spike in nitrate, for example, at the groundwater table below a recharge site," she says.

In the long run, though, she thinks it will be good for water quality. "Most of the water that we use for recharge is very clean, because it comes from rainfall or snowmelt from the Sierra Nevada Mountains," she says. "Eventually there will be a pulse of clean water also coming into the aquifer, which can dilute many of the pollutants that have moved into the groundwater over the last couple of decades."

She points to the experience of a small community in Tulare County called Okieville. There are parts of the community where wells show high levels of contamination. But along its southern edge, there's a groundwater recharge basin that the Tulare Irrigation District regularly fills with floodwater. People who live near that basin have enjoyed reliable supplies of clean water from their wells.

The irrigation district now is planning to build a new recharge basin on the other side of Okieville. "The idea is we can begin to shove water underneath their community. Good, clean water," says Aaron Fukuda, general manager of the irrigation district. "The water quality, we hope, gets better."