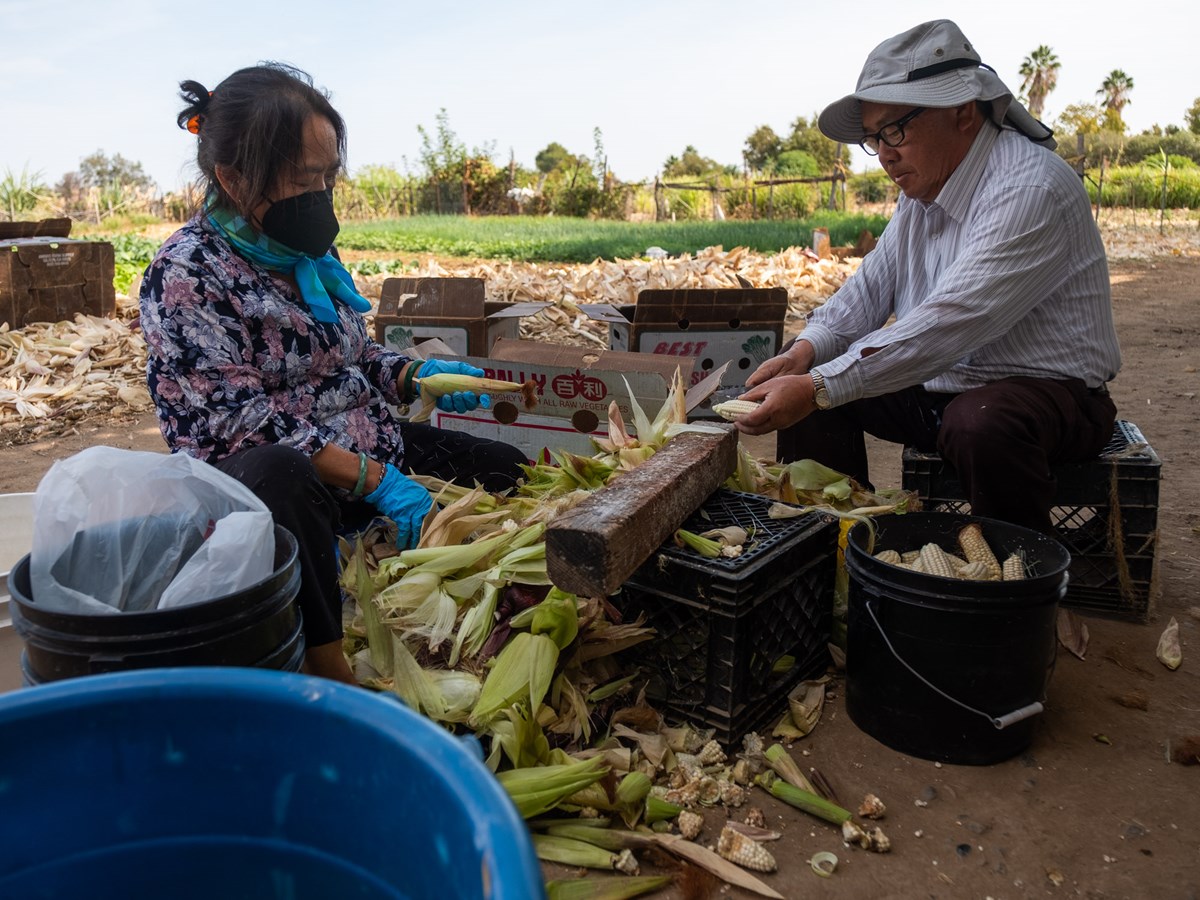 Yer and Rocky Vang prepare corn for sale at their plot in a garden on Lemon Hill Ave on Tuesday, Oct. 5, 2021.

In South Sacramento, an oasis of South Asian vegetables bloom just off the side of a busy boulevard. Known simply as the Lemon Hill Garden, this multi-acre property is leased by a neighborhood church to mostly Hmong residents, who are looking to grow their own food.

There’s lemongrass bushes, special herbs and leaves, bitter melon and sticky corn. This garden has existed and has been run by the local South Sacramento Hmong community for at least 15 years.

Cha Vang, whose mother has rented a plot at this garden for over a decade, said that back when she was growing up, it helped her family eat fresh food and vegetables that they might not have otherwise been able to afford.

“We never thought we were poor because we always had food on the table because, you know, my mom was always gardening at the local garden and she would always bring back produce for us,” Vang said. “That really gives you an eye-opening experience about what it meant to have a community garden.” 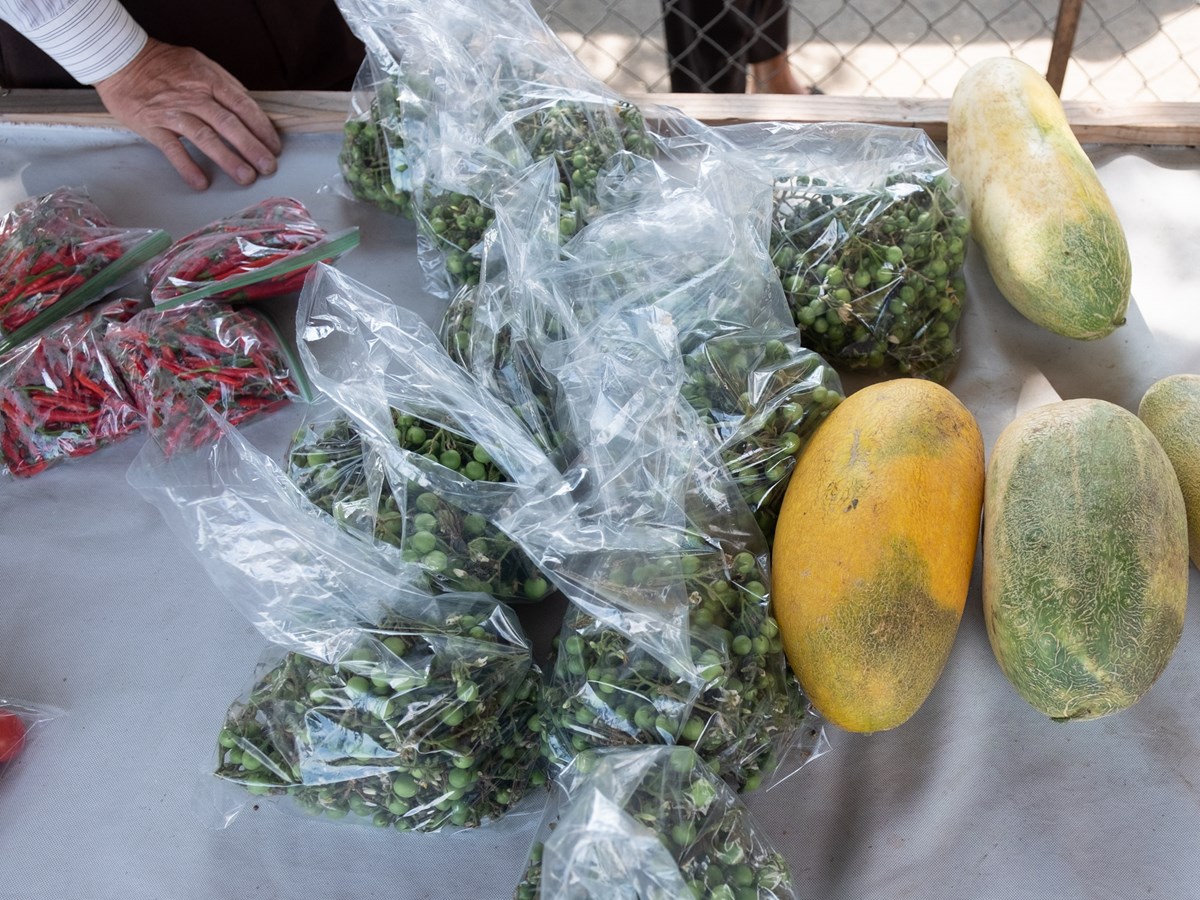 Produce for sale along the fence of a Hmong garden on Lemon Hill Ave. in Sacramento, Calif. Tuesday, Oct. 5, 2021.Andrew Nixon / CapRadio

This is not the case, however, for most Sacramento region residents.

A new CapRadio and Valley Vision survey suggests people of color were most interested in community gardening, and yet less than half of the residents who responded to this survey said they were able to access garden space.

Securing space to farm can be one of the biggest barriers for lower income residents trying to create a community garden. The city of Sacramento currently runs 17 gardens across the city, but in south and north Sacramento — some of the city’s lowest income and most diverse neighborhoods like Del Paso Heights and Meadowview — there are no city-run community gardens.

This means residents like Cha Vang and her mother have to take the initiative. She says  many of the older residents who farm a plot actually sell their vegetables to community members at prices that are cheaper than local grocery stores, making the garden something that continues to give back to its surrounding community and allows lower income Hmong residents to access specialty vegetables that they would have a harder time finding elsewhere.

“This is one of the largest community gardens. and there's so many families here that if this didn't exist, we wouldn't know or they wouldn't know where to go to find it,” Vang said.

Shannon Brown, assistant director for the city’s Department of Youth, Parks and Community Enrichment, says for the city to create more community gardens, it all comes down to money.

“It gets challenging with the lack of funding and resources to invest in in these areas, and we're making note of it and really trying to figure out a way to move forward with these issues,” Brown said.

The city typically creates new community gardens from money generated by the construction of new buildings or property, according to Brown. But if an area isn’t having any new development, there is likely no money to create a garden.

There are other obstacles for communities, as well. Chanowk Yisrael is one of the founders of Yisrael Family Farms in Oak Park. Oak Park does have a city-run community garden, but Yisrael said that there are other barriers that his organization has tried to address that have kept people of color from accessing that space.

“So there's a great community garden on Martin Luther King Boulevard in Oak Park,” Yisrael said. “But I can guarantee you that there's probably not a whole bunch of people that live in the underserved community that have garden plots there because, of course, they're going to need to learn how to grow food.”

Yisrael Family Farms seeks to help African Americans in the area learn about how to grow fresh vegetables. According to the CapRadio/Valley Vision survey, just 60% of African American respondents had had experience or exposure to gardening — the lowest out of any racial group surveyed.

“It’s historical, because at one point, Black people owned about 18 million acres of land, and by now it's probably only about 1.5 million acres of land,” Yisrael said. “There's been discrimination. There’s been all these different things that have played into the idea of why, in general, Black people do not take agriculture or farming or growing your own food as something they want to do.”

This history of discrimination of course affects other races and cultures as well. At one point in the early 1900s, South Sacramento was a vast farmland, cultivated mostly by Japanese Americans who knew how to grow crops in the difficult soil. But after Japanese internment, hundreds of families were forced to give up their farms, and few returned after World War II.

“We [developers] bought this land in ‘47, ‘48, would we have been able to purchase this if but for the internment and the loss of the farms?” asked Julie Thomas, an archivist at Sacramento State University specializing in Japanese Internment.

“It is mind boggling that it was so fruitful, literally and figuratively, and now it’s just economically disadvantaged. It is ironic that right now, there is such a scarcity of fresh food down there.”

Cha Vang in South Sacramento has said that although the community that uses the Lemon Hill gardens are lucky, finding space to farm in any underserved neighborhood is challenging — especially if the community is lower income or doesn’t speak English.

“The other barrier is just having the information where plots are open for community members to use and to really garden on,” Vang added. 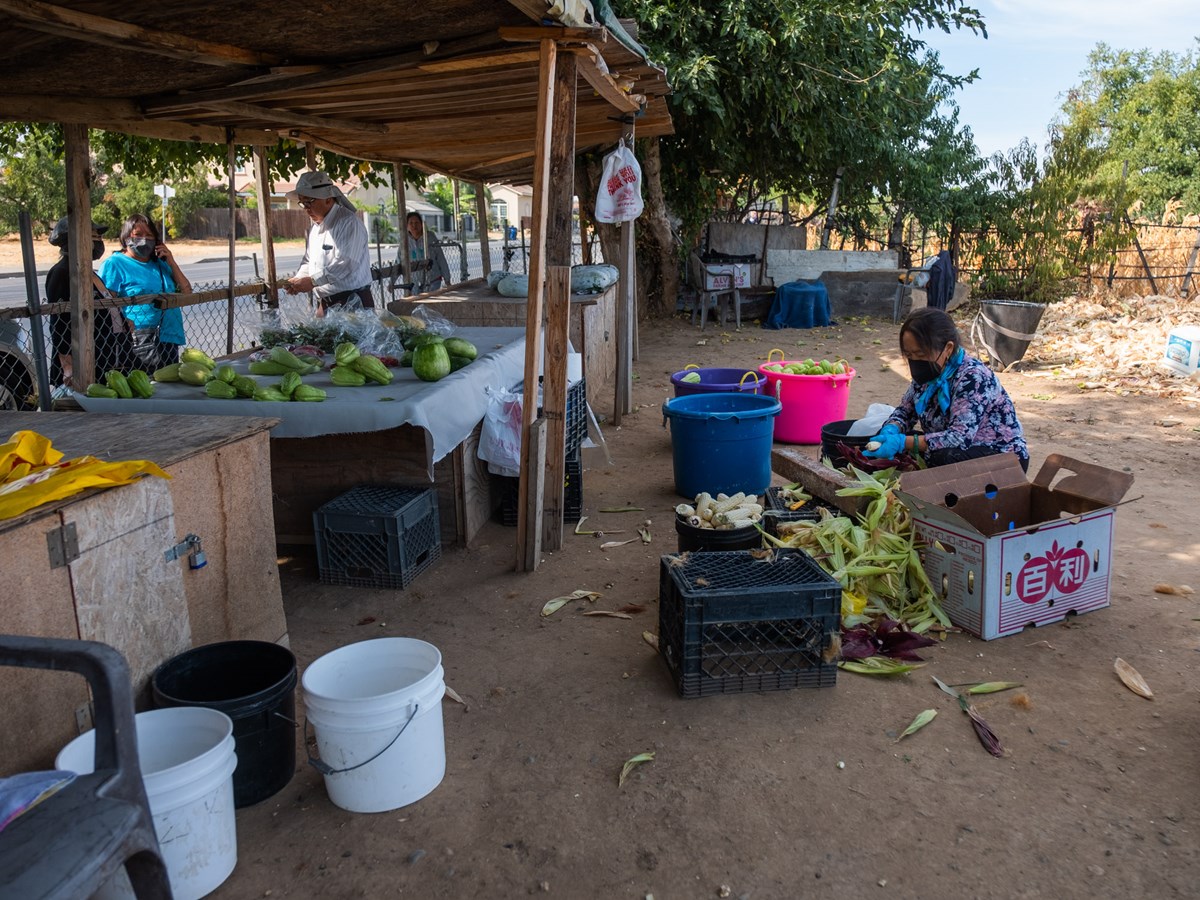 She said she’d like for her organization to be able to secure another plot of land to build a garden that can serve the community in the near future.

“My personal hope is that it would happen,” she said. “People could use it as a gateway to connect intergenerationally to our community, our families and then also to our culture as well.”