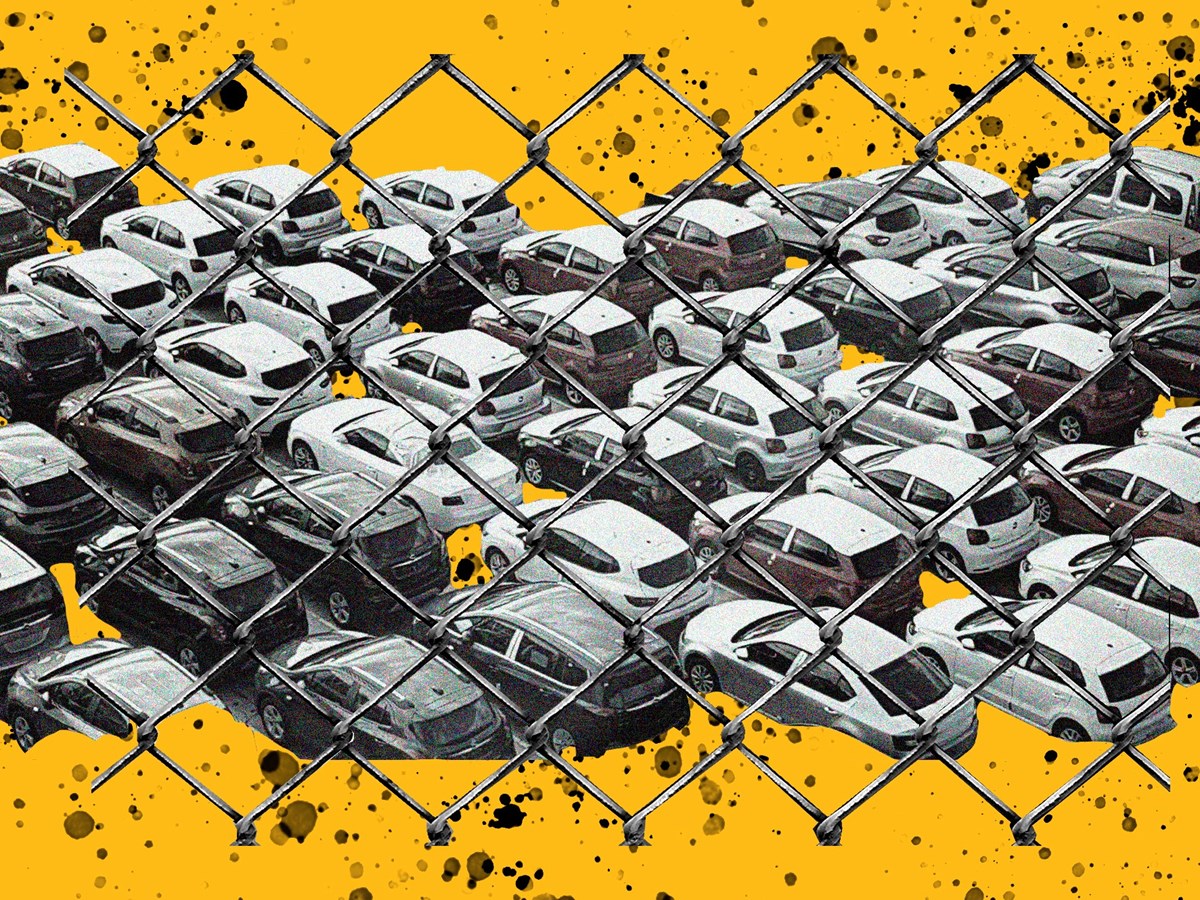 Four years after a federal appeals court ruled that 30-day vehicle impounds for unlicensed drivers are unconstitutional, some law enforcement agencies across California are still doing them.

The California Highway Patrol, one of the busiest towers in the state, continues 30-day impounds and denying early releases, despite the court ruling and the agency’s own policy expert warning against the practice, according to a CalMatters examination of public data, internal CHP emails and court documents.

CHP’s impound policy is now under attack by at least three lawsuits, claiming the state police agency is seizing and keeping people’s property in violation of the Fourth Amendment, which protects the public from unreasonable searches and seizures.

A 30-day impound can be a costly punishment for some drivers caught without a valid license. They are frequently poor Californians who’ve lost their licenses for offenses ranging from missing traffic court to lack of insurance to driving drunk.

“Thirty-day impounds are popular with a lot of people, given who the victims are,” said Los Angeles attorney Donald Cook, who is suing CHP for its towing practices. “I get that we want to discourage unlicensed drivers from driving vehicles, but this is not the way to do it.

“You give them a ticket, take their car off the street, you can criminally charge and convict them,” he said. “But you don’t summarily dispose of their property.”

For law enforcement, motorists and lawmakers, dissuading unlicensed drivers from getting behind the wheel is a high priority, with one federal study saying they account for 19% of fatal crashes nationwide. But according to the U.S. Court of Appeals for the 9th Circuit, dealing with these drivers is also a balancing act  – protecting motorists immediately from unsafe drivers while also protecting people from drawn-out car impoundments.

Marooned in a tow yard

Since 1995, state law has allowed police to impound cars from unlicensed drivers for 30 days — and the law has stayed on the books, despite the 2017 federal ruling.

This has resulted in a patchwork of enforcement practices, CalMatters has found. Whether an unlicensed driver’s vehicle is impounded usually hinges on where the person was stopped.

For instance, many stations in the Los Angeles County Sheriff’s Department told CalMatters they still use 30-day impounds, although a spokesperson said they don’t have an agency-wide policy.

But along the vast stretches of California highways — which CHP rules — citations for driving without a license still can end with a citation, no car for 30 days and well over $1,000 in towing fees. CHP does not charge its own towing fees but contracts with companies statewide.

Between January 2017, the year of the court decision, through July 2021 CHP officers ordered more than 50,000 30-day tows for unlicensed drivers, according to a CalMatters analysis of towing data. Those impounds make up about 7% of all CHP tows.

Angelica Untalan’s 2000 Grand Am was one of them.

Untalan, then 25, was living in one of the most sprawling cities in the country. Still, she never had a driver’s license and had been stopped multiple times, but not towed, leaving her with fines and court summons, court records show.

In May 2019, a South Los Angeles CHP officer stopped Untalan for a cracked windshield and not wearing a seat belt, according to her federal lawsuit filed the same year in Los Angeles.

Untalan was searched, cited, and her car hauled off to California Motor Club’s tow yard for a 30-day stay, according to CHP data obtained through a public records act request. That day, Untalan’s Grand Am was one of six 30-day impounds ordered by South Los Angeles CHP officers and among 29 statewide, the data show.

Nearly two weeks later, officers agreed to release the car after Untalan’s attorney signed a form, saying Untalan would not be “given, rented, or provided” any vehicle until she got a license, according to the lawsuit and documents provided by Cook, her attorney. The car had accrued 11 days worth of fees, which Untalan couldn’t afford, and her car was sold in a lien sale about a month later, the lawsuit states. She owed around $2,000.

Untalan declined an interview with CalMatters.

“[It] really violates basic, fundamental concepts of…due process that just are so at odds with the way things are done,” he said.

Through a spokesperson, CHP declined to comment on the lawsuit or the agency’s 30-day tow policy, citing “ongoing litigation.”

Since the 2017 federal ruling, however, the agency’s policy experts have sent mixed messages.

Six days after the court decision, Chris Lane, commander for the research and planning section, emailed several staff members saying, “… we are aware (of the decision) but no policy changes at this juncture.”

By 2020, the message from that office was changing.

Justin Sherwood, a vehicles procedures expert for the agency, advised officers against the impounds in internal emails. On July 23, 2020, Sherwood told a fellow CHP employee the court decision “essentially made it impossible to deny early releases absent a court order…”

In another internal email on Sept. 30, 2020, Sherwood wrote, “The impound is lawful…holding it is not. … I wouldn’t want to be the guy at the front counter that gets my office in hot water!”

“It doesn’t surprise me that the CHP is still trying to defend their position, but I’d be nervous about it, given the facts of the… (appellate court ruling),” said Rory Little, a UC Hastings College of Law professor and constitutional expert.

When the 9th Circuit ruled against 30-day tows for unlicensed drivers, the move was heralded in some news reports as a clear smackdown of the state law.

The reality was more opaque. The court sidestepped answering if the law was constitutional. Instead, the three-judge panel determined that while police can tow vehicles away from unlicensed drivers in exigent circumstances, holding onto a person’s vehicle for 30 days is a seizure and must comply with the Fourth Amendment.

“The whole issue about whether it’s a fair penalty is still up in the air,” said Little.

Proponents of keeping the law intact have said that the policy is needed to deter unlicensed drivers.

“Studies have shown that revoked and unlicensed drivers are disproportionately involved in traffic collisions, and nothing less than removing their access to a vehicle will prevent them from continually driving,” Silva said in an email.

A 2012 study by the California Department of Motor Vehicles, for instance, reported 30-day impounds reduced crashes by 38% among repeat unlicensed drivers.

Last year, Francisco Gomez Lopez, then 26, had a suspended license after driving drunk too many times, he said. That didn’t stop him from giving his wife, Yaquelin Ordonez, a lift in her car to her mid-term exam at California State University, Los Angeles. She said she’d typically take the bus, but on that day, she overslept. Ordonez also didn’t have a license, she said, but was practicing for her driving test.

On his way home, Lopez was stopped by a CHP officer, cited for driving without a license and not having a breathalyzer installed in the car, which was registered to his wife. Although he wasn’t drinking that day, he was ticketed and his wife’s car was impounded. CHP refused to release the car early to a licensed driver, and Ordonez decided to sue.

“I do understand the fact that they took away his driver’s license. He’s not supposed to be driving,” Ordonez said. “I don’t understand why they had to take away the car for so long.”

“We were left with zero dollars after that,” said Ordonez.

On average, storage fees in California cost $53 a day, according to a report on how towing practices punish poor Californians. With fees and administrative costs, a 30-day impound can rack up roughly $2,000 in fees.

“These tows are often not tied to a public safety rationale,” said Rachel Stein, an attorney for Public Counsel, a Los Angeles law firm that worked on one of the federal lawsuits. “It just seems punitive and another way of criminalizing poverty.”

The law allowing 30-day impounds, which took effect in 1995, has been contentious since the beginning.

At the time, the bill’s author touted the policy as a way to protect the public from dangerous drivers. Advocates saw it as a way to target undocumented Californians who, at the time, couldn’t become licensed drivers.

Some cities stopped enforcing 30-day impounds years ago. Bell Gardens and Huntington Park, for instance, stopped the impounds in 2007 after complaints that the tows were unfairly targeting immigrants.

While municipalities carved out their own policies for how to enforce the law, state legislators never struck the law from the books. Instead, they trimmed around it.

After a Southern California police department was found using DUI checkpoints to target unlicensed drivers, then pad the city’s coffers, the state cracked down.

Gov. Jerry Brown, in 2011, signed a law limiting when police could impound vehicles at sobriety checkpoints. While that ended many 30-day impounds at checkpoints, it left them in place in other instances.

As the legality of mandatory 30-day impounds plays out in courts, the final decision will likely take a while.

Ordonez’s jury trial is set for early next year.

Last month, ruling in motorist Angelica Untalan’s favor, U.S. District Judge Otis D. Wraith II stated that the officers “prolonged the seizure without justification.” By not releasing her vehicle when she showed up with a licensed driver, Untalan’s “Fourth Amendment rights were violated as a matter of law,” the judge wrote.

A third lawsuit, this one in the Superior Court of Los Angeles, is also challenging CHP’s policy.

“Lawyers are trained to try to find ways around things that are roadblocks to their client’s interests,” said Little of UC Hastings School of Law.

“And I always say…no decision ever finally settles anything.”

Meanwhile, CHP has continued its 30-day impounds. As of July 31, officers had ordered more than 6,000 tows this year — from El Centro near the Mexico border to Yreka, near Oregon.