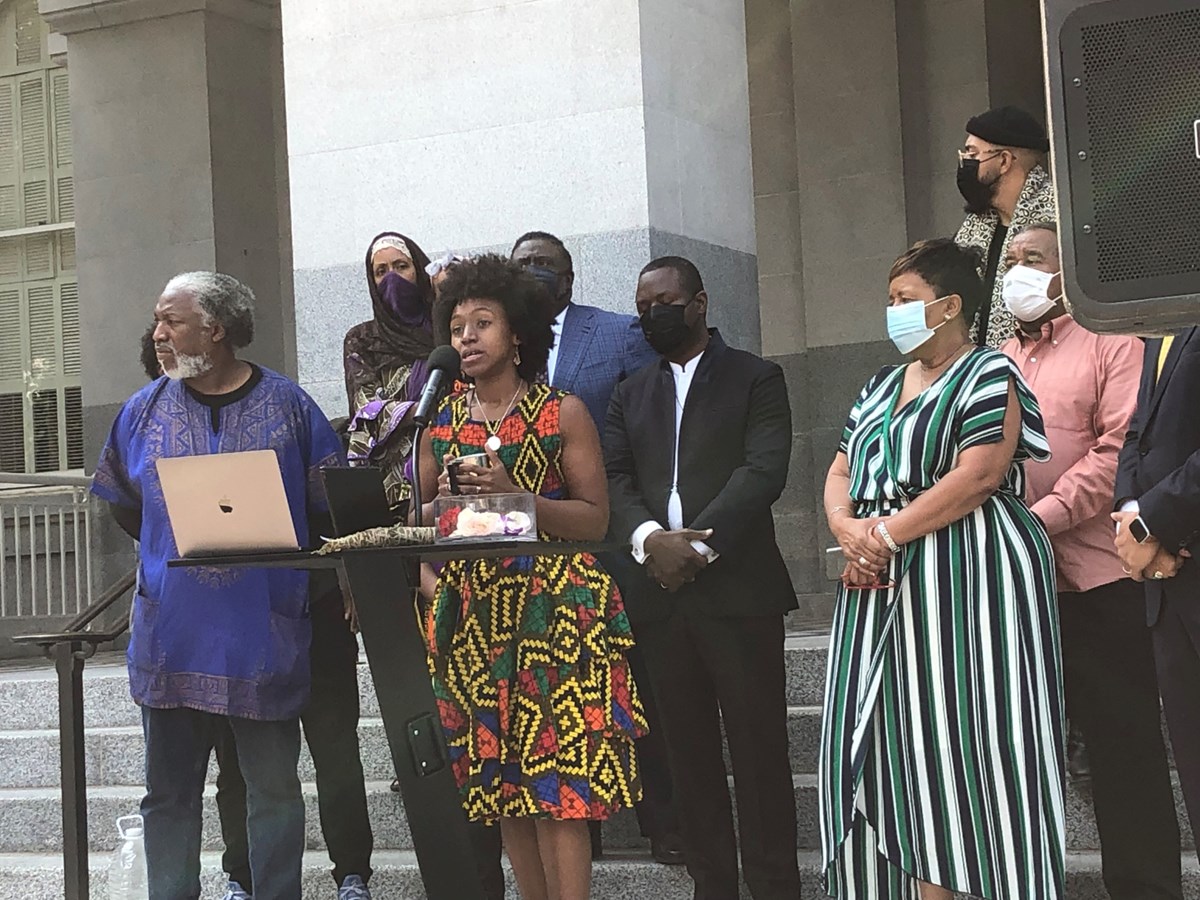 Nakia Porter and her father, JB Powell speak at a rally demanding an independent investigation into the Solano County Sheriff's Office on Wednesday, September 16, 2021.

On an evening last August, Nakia Porter and her family were driving back to their home in Orangevale after a trip to the Bay Area when she started feeling sleepy.

She pulled off the freeway ramp in Dixon to let her father drive. It was then that Porter says two Solano County sheriff’s deputies approached her, then handcuffed her, knocked her unconscious and arrested her.

Last month, Porter’s family filed a federal lawsuit against the Solano County Sheriff’s Office. They're now asking California Attorney General Rob Bonta and the federal Department of Justice to open an independent investigation into sheriff's deputies Dalton McCampbell and Lisa McDowell. The Sacramento NAACP says they have heard from the Department of Justice but did not mention if they would be conducting an investigation.

“They didn’t see any type of humanity in me, which led to them, after me complying, which led to them beating me up, and then saying ‘Oh, we maybe just hit her in her side,’” said Porter, who is Black. “No, you punched me in my head, multiple times.”

Video from the sheriff’s vehicle and body camera footage shows Porter in an SUV pulling off to the side of the road on August 6, 2020, and then getting out to switch to the passenger side of the car. Deputies McDowell and McCampbell approach her and direct her to go back to the driver’s side. She complies.

The video then shows deputies asking her to put her hands behind her head and handcuffing her. Porter says repeatedly that she is not resisting arrest, and then she begins praying as an officer punches her and then kneels on her back. She then passes out.

“Anyone who took the time to actually watch the video was horrified by the injustice and terror that was inflicted on Ms. Porter by the Solano County Sheriff’s Office,” the family’s attorney Yasin Almadani said. “Excessive force experts, former law enforcement officers undoubtedly said that these deputies should be criminally investigated.”

In a press release from the Solano County Sheriff’s Office, the department said it understood that the video had “left our community with questions regarding what happened.”

The release also says deputies initiated the traffic stop after seeing that Porter’s car had license plates from two different states, and that Porter was detained for resisting arrest.

The Solano County Sheriff’s Office has not responded to requests for further comment.

Porter said she is still traumatized by the event, as are her two young children and a niece who were in the back of the car at the time and witnessed the assault.

“I want you to feel what it’s like to be completely confused for doing everything right,” she said.

At a rally held asking for justice at the state Capitol this week, Porter held up two braids, and said they were braids that were ripped from her head by an officer when she was detained.

Video footage also shows Porter — who is just 5’2” and 125 pounds — being dragged while still unconscious by officers to the back of their car.

“It’s time for us to humanize the traumatized, because somehow we’ve become desensitized to this Jim Crow Style, sundown town beatings by reckless law enforcement officers in the state of California,” Kitrell said. “We should be able to drive these streets and change seats in a vehicle without having our lives changed forever by those who have been called to serve and protect.”

Betty Williams, president of the Sacramento NAACP chapter, said Porter’s experience is unfortunately not the first she’s heard of Black people being threatened by police in Solano county.

“We are calling this the new Mississippi, if you’re going through Solano county, Black people, be aware,” Williams said. “Because if you have to stop for anything late at night or early in the morning or during the day and you are approached by a Solano sheriff, you need to be aware.”

The NAACP is helping to call for a federal investigation into the Solano County Sheriff’s Office.