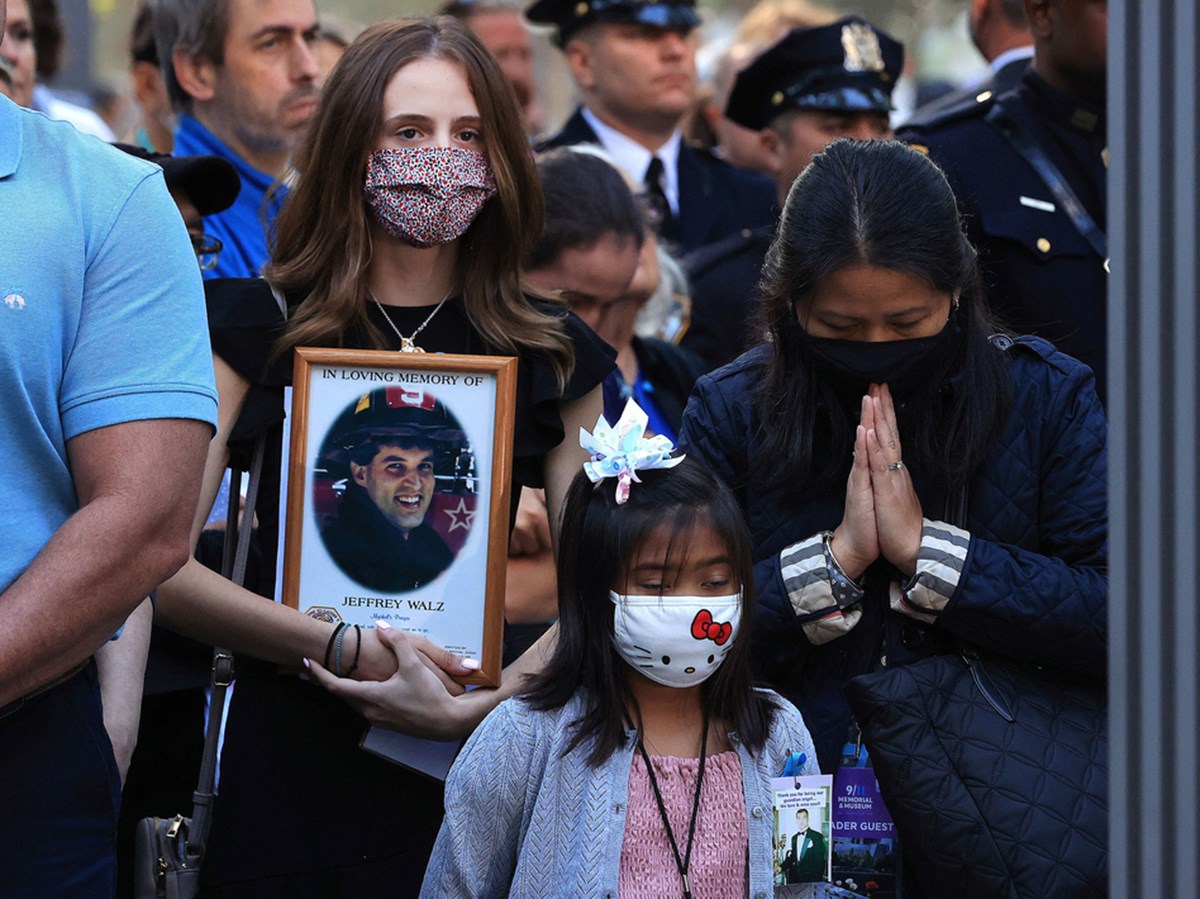 Family members and loved ones of victims of those who died on 9/11 attend the 20th anniversary commemoration ceremony on Saturday at the National September 11 Memorial & Museum in New York City.

Twenty years to the day after a pair of hijacked airliners destroyed the World Trade Center towers, another plane punched a gaping hole in the Pentagon and a fourth passenger jet crashed in a Pennsylvania field after passengers sought to regain control from hijackers, Americans across the country reflected on the events that forever changed their country.

Nearly 3,000 people were killed on Sept. 11, 2001, which not only sparked enormously costly and largely unwinnable wars in both Afghanistan and Iraq, but also spawned a domestic war on terrorism, rewriting the rules on security and surveillance in the U.S., the repercussions of which continue to reverberate.

People were gathering in Lower Manhattan at the National September 11 Memorial & Museum at the spot where the World Trade Center's twin towers once stood. Three presidents — President Biden, former presidents Barack Obama and Bill Clinton — and their wives attended. They wore blue ribbons and held their hands over their hearts as a procession marched a flag through the memorial and stood somberly side by side as the names of the dead were read off by family members and stories and remembrances were shared. 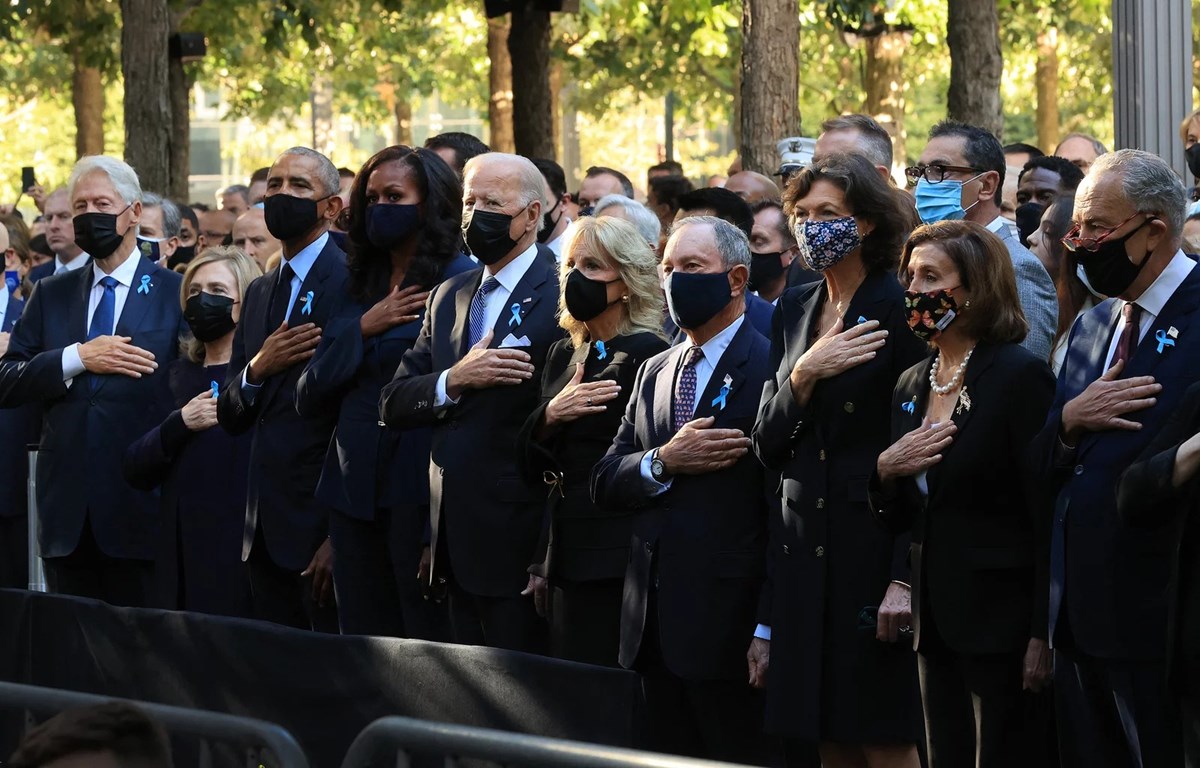 The president and first lady also met with former New York Mayor Michael Bloomberg and his partner, Diana Taylor, according to the White House. They greeted FBI Director Christopher Wray, House Speaker Nancy Pelosi, the New York congressional delegation, and many other current and former state and local officials as they arrived at the memorial.

At a ceremony at Shanksville, Pa., former President George W. Bush remembered the day that "the world was loud with carnage and sirens. And then silent with voices."

Bush lamented the current era of political division, seeming alluding to the Jan. 6 insurrection at the U.S. Capitol. 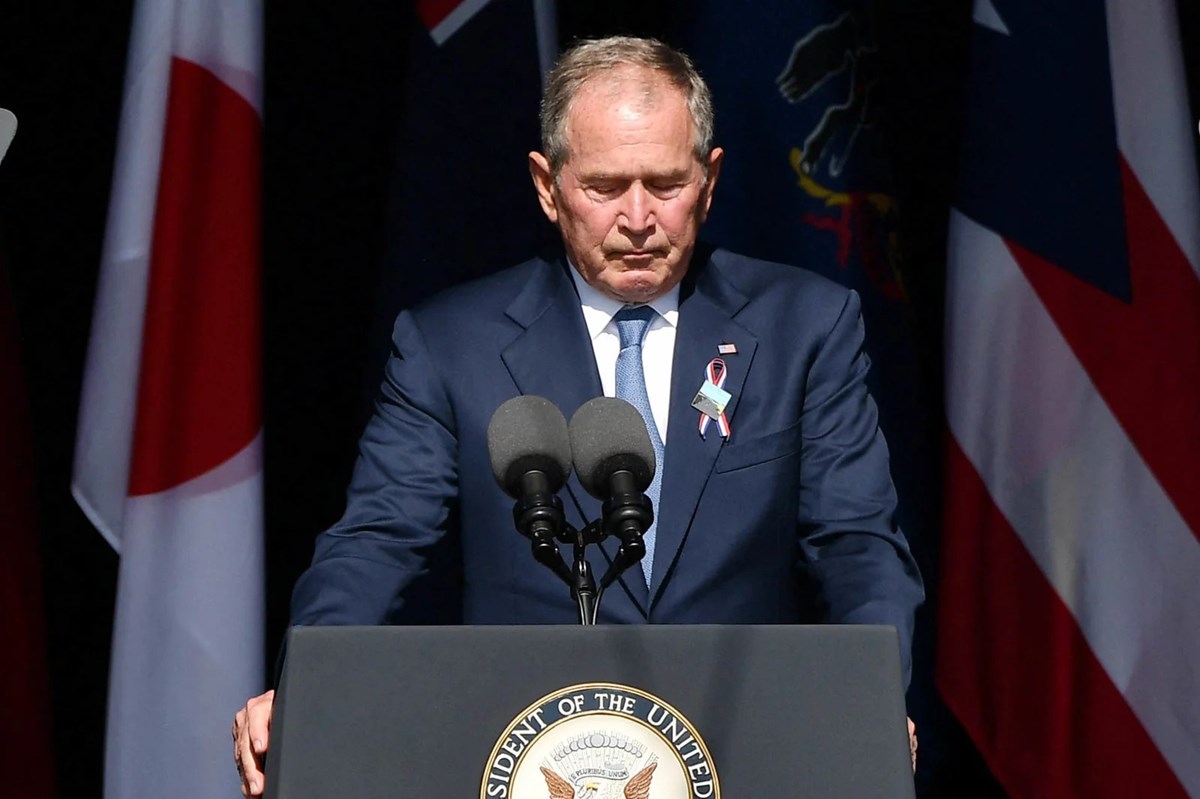 Former President George W. Bush pauses during his speech during the 9/11 commemoration at the Flight 93 National Memorial in Shanksville, Pa., on Saturday.Mandel Ngan/AFP via Getty Images

"We have seen growing evidence that the dangers to our country can come, not only across borders, but from violence that gathers within," Bush said. "There is little cultural overlaps between violent extremists abroad and violent extremists at home ... they are children of the same foul spirit, and it is our continuing duty to confront them." 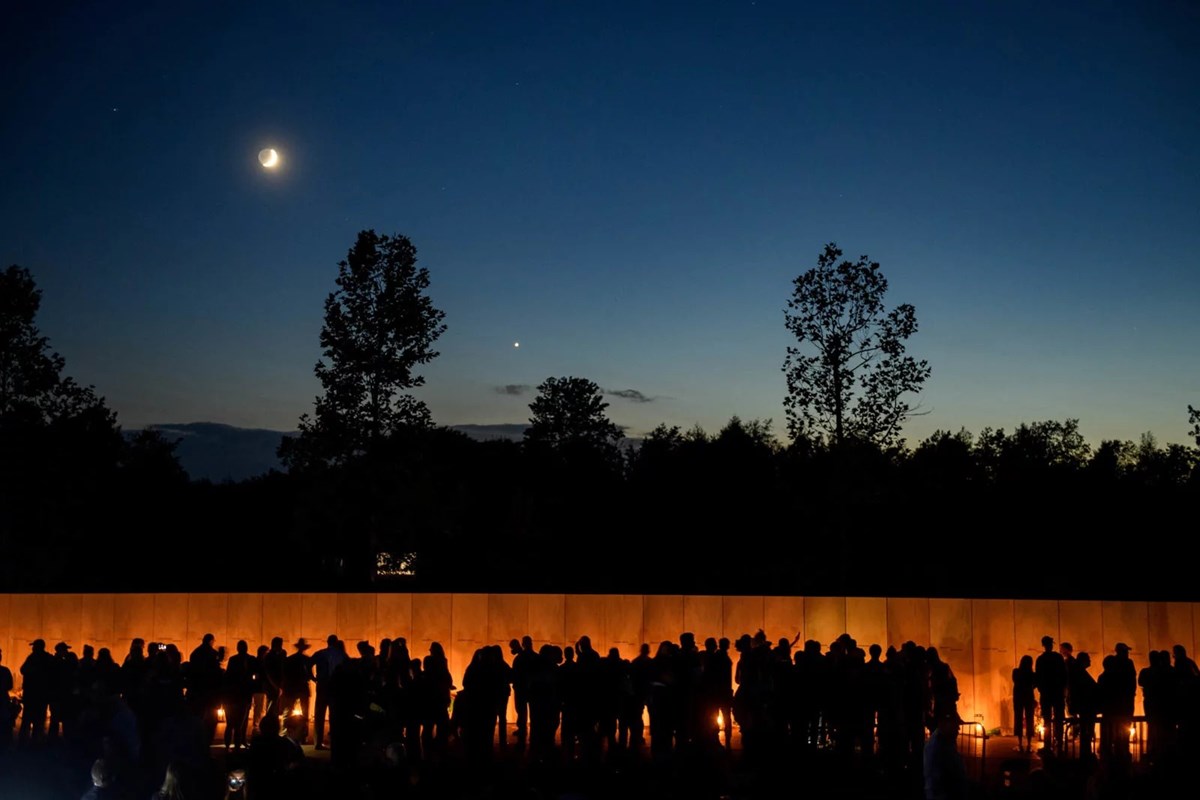 Visitors line the Wall of Names at the Flight 93 National Memorial on Friday in Shanksville, Pa. The Luminaria Ceremony commemorates the 40 victims of Flight 93.Jeff Swensen/Getty Images

Echoing Bush, Harris said that in the days after the attacks, "we were all reminded that unity is possible in America. We were reminded, too, that unity is imperative in America. It is essential to our shared prosperity, our national security, and to our standing in the world."

The Bidens were also to attend a wreath-laying ceremony at Shanksville, as well as the Pentagon. 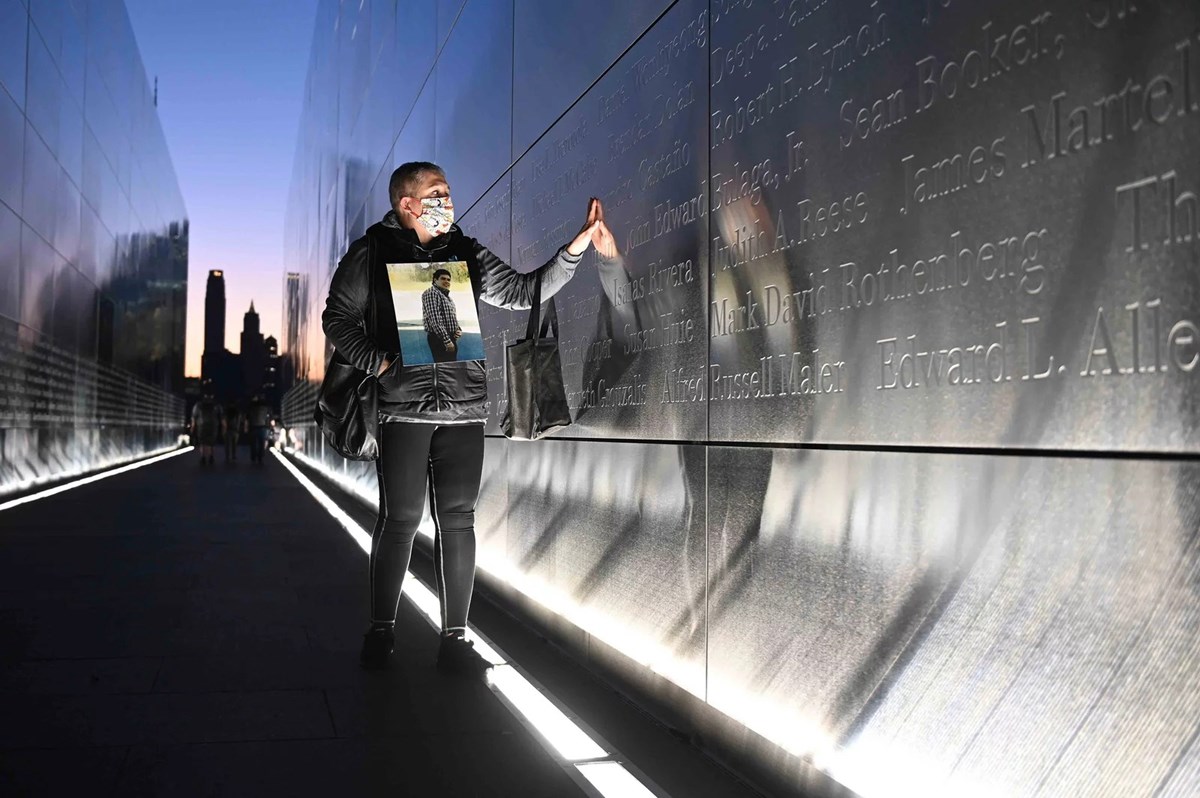 Claudia Castano touches the name of her brother that is etched at the Empty Sky 9/11 Memorial in Liberty State Park in Jersey City, N.J., on Sept. 11, 2021.Roberto Schmidt/AFP/Getty Images

At ground zero in New York City, the national anthem was performed in a solemn ceremony, and then, in what has become an annual tradition, a moment of silence was observed at 8:46 a.m., when American Airlines Flight 11 crashed into the north tower.

Another moment of silence was observed at 9:03 a.m., when United Flight 175 hit the south tower. Bruce Springsteen, with an acoustic guitar and harmonica, took the dais to perform "I'll See You In My Dreams." Then more names were read.

Two similar moments of silence followed, marking the collapse of the south tower at 9:59 a.m. and the north tower at 10:28 a.m. 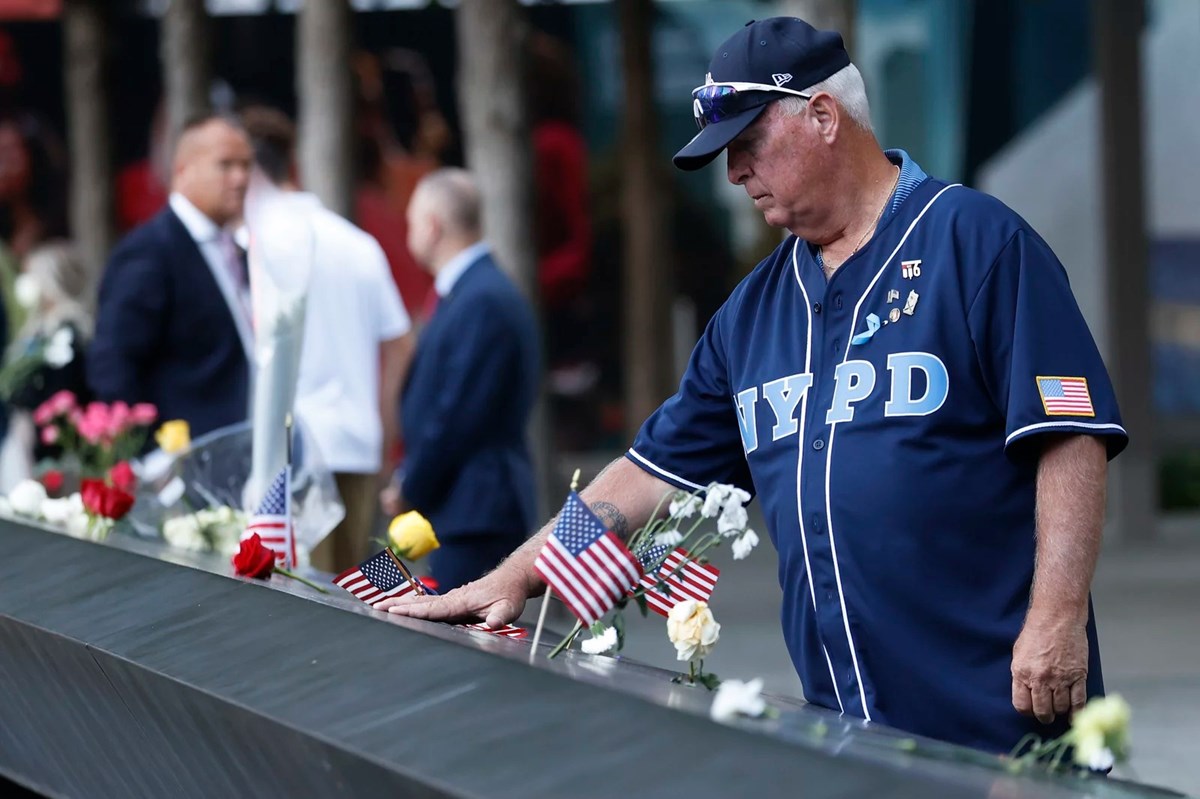 A man mourns Saturday at the 9/11 Memorial in New York City on the 20th anniversary of the Sept. 11 attacks.Mike Segar/Pool/Getty Images

A moment of silence was observed at 9:37 a.m., marking when American Airlines Flight 77 careened into the west face of the Pentagon. A ceremony there was hosted by Secretary of Defense Lloyd Austin and Chairman of the Joint Chiefs of Staff Army Gen. Mark Milley.

In London, acting ambassador to the United Kingdom Philip Reeker, attended a special changing of the guard at Windsor Castle, where the U.S. national anthem was performed. Reeker said Americans would be "forever grateful" for the "enduring friendship" between the two countries. 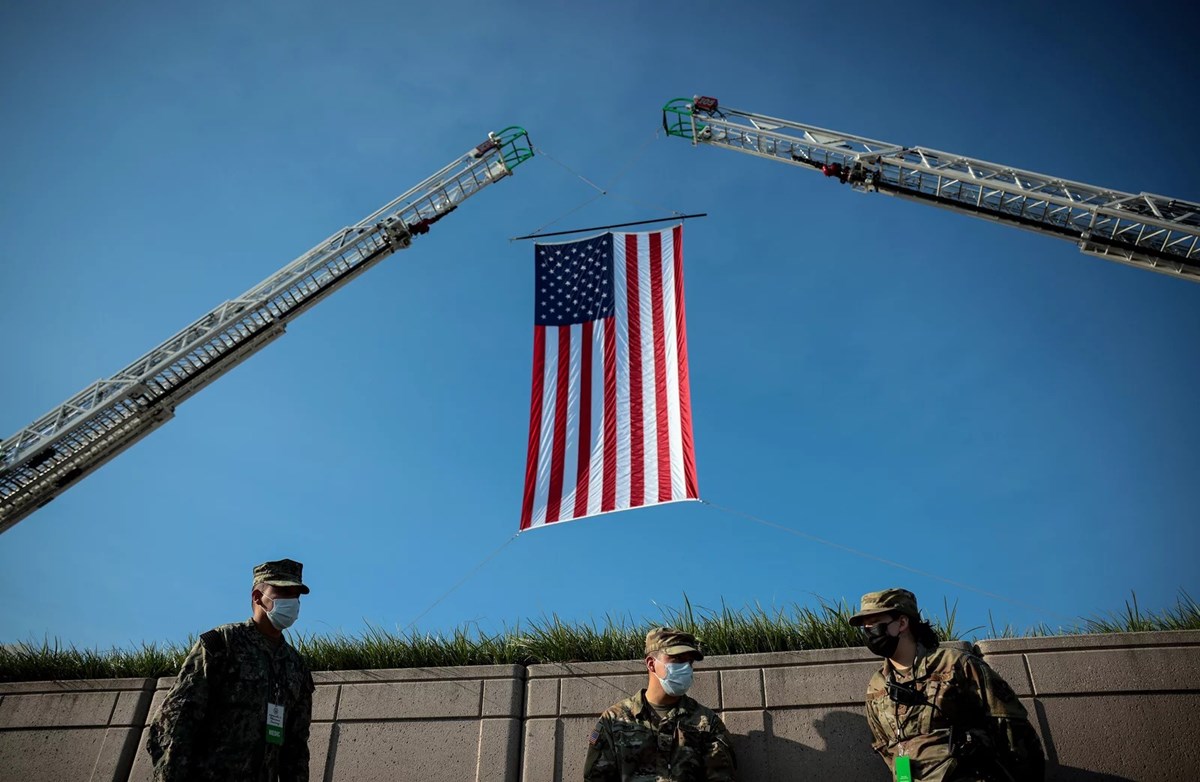 Soldiers wait below an American flag prior to the start of the Pentagon 9/11 observance ceremony at the National 9/11 Pentagon Memorial on Saturday in Arlington, Va.Win McNamee/Getty Images

Speaking on Friday, Biden said that in the days after the attacks in 2001, "we saw heroism everywhere — in places expected and unexpected."

"We also saw something all too rare: a true sense of national unity," he said. 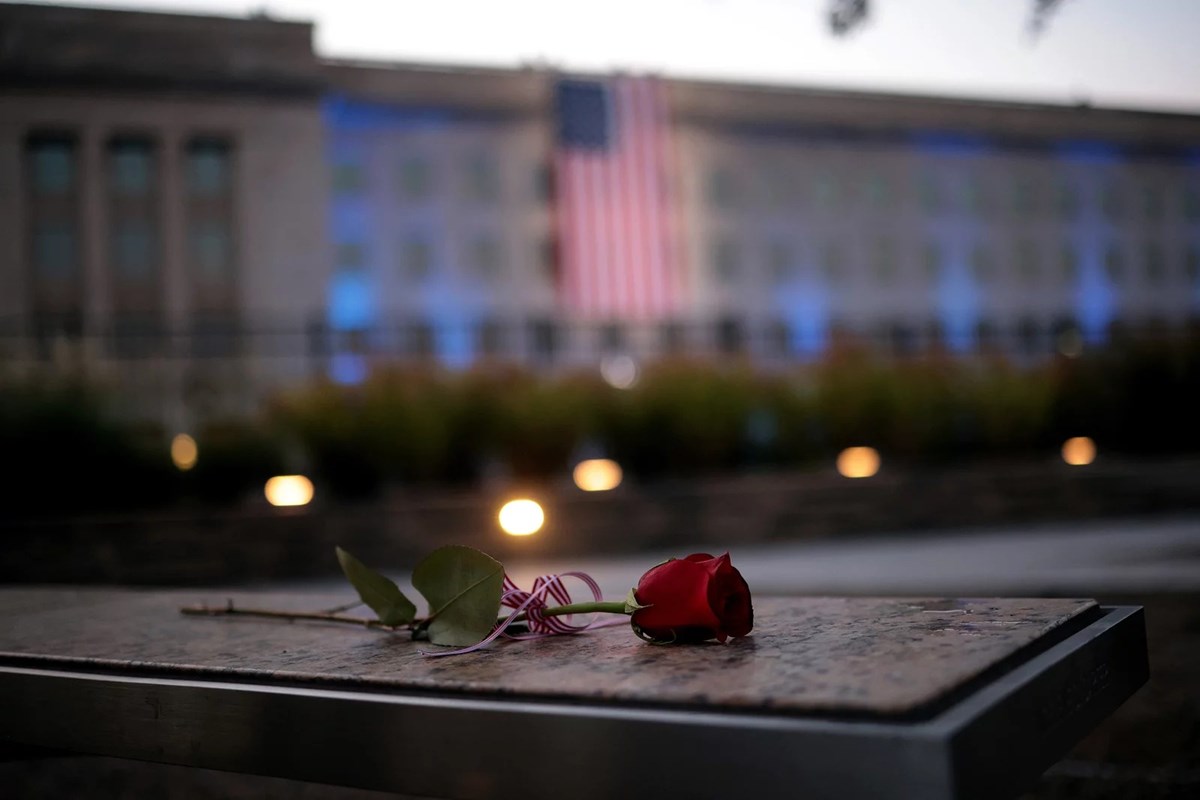 People paid their respects at the National 9/11 Pentagon Memorial in Arlington, Va., as well as in at memorials in New York and Pennsylvania and across the country.Win McNamee/Getty Images
Follow us for more stories like this