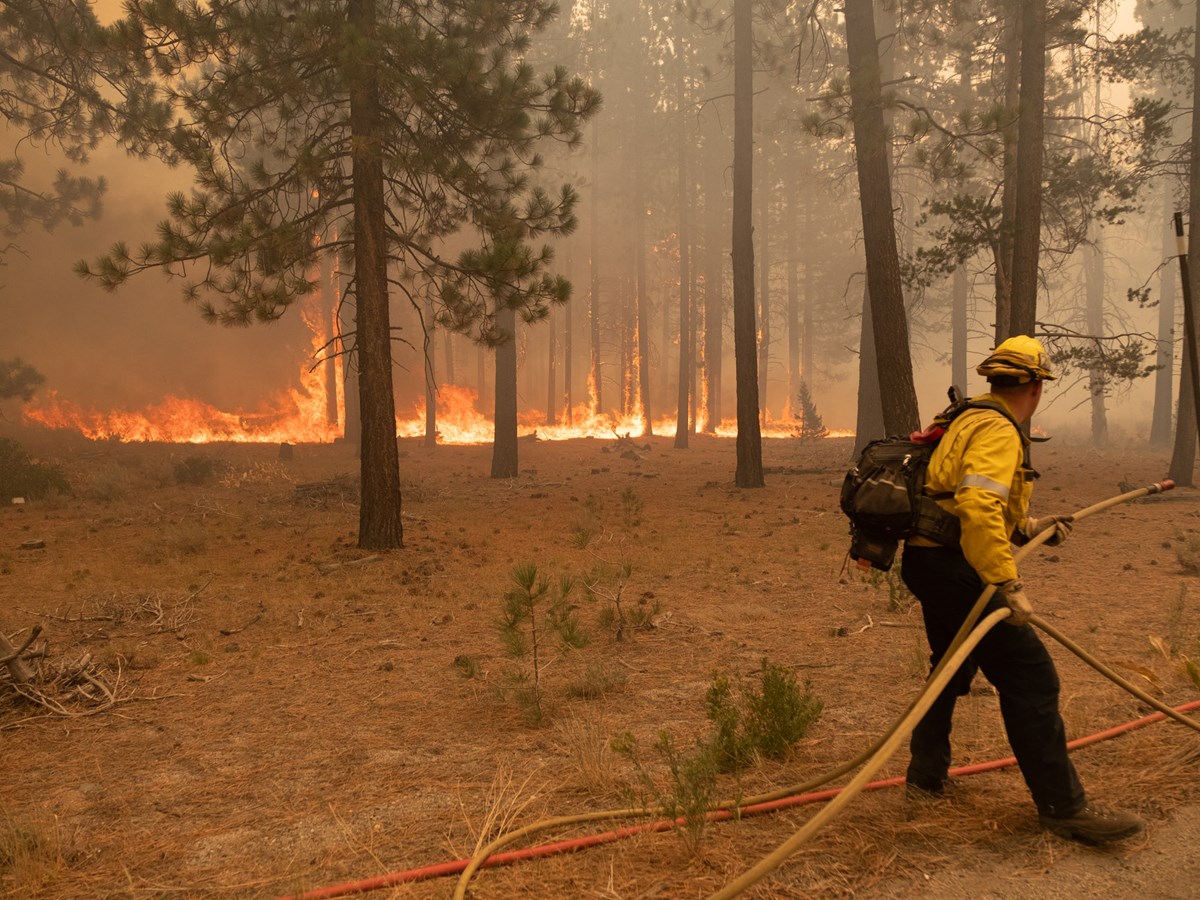 Calmer winds and slightly higher humidity are offering some relief to firefighters on the frontlines of the Caldor Fire, as the blaze edges past 210,000 acres and containment remains only 27%.

A red flag warning stretched from Monday through Wednesday, when high temperatures and gusting winds fueled the spread of the fire. Flames overran Echo Summit along Highway 50 and shot down into the Tahoe Basin earlier this week. But as of Thursday, crews have successfully kept the fire from edging into South Lake Tahoe, the densely-populated tourist destination under mandatory evacuation.

With more moderate weather conditions expected over the next few days, firefighters now have a crucial window to gain containment and shepherd the fire away from homes and neighborhoods. Meanwhile, some evacuation orders have been lifted in western El Dorado County.

“The issues and conditions that weather was causing, especially for the last couple of days, are going to be mitigated by much lighter winds across the fire,” said Jim Dudley, Cal Fire incident meteorologist, at a briefing Wednesday evening.

Also on Wednesday, Gov. Gavin Newsom toured the damage from the Caldor Fire, but granted media access to only one local TV outlet. The governor’s office ignored a CapRadio request for any information about Newsom’s visit to the fire zone.

The fire posed a nightmarish scenario Monday night when it crested Echo Summit and tore into the Basin.

New: #CaldorFire has crossed Hwy 50 near Echo summit where crews were attempting to make a stand and hold it back from making another hard run.

Fire is headed down mountainside now toward Hwy 89 and Meyers. pic.twitter.com/FHJbGykJ3L

Gusting winds pushed the fire front into Christmas Valley below Highway 50, torching brush and making aggressive “crown runs” along parched treetops. Embers jumped across the valley and started a fire on the other side, causing flames to simultaneously bear down on the homes below from the east and west.

Fire engines flooded neighborhoods as crews layed hoses and set up containment lines. But the winds changed course, pushing the fire front north out of the valley. Firefighters kept the flanking fire at bay using hand tools and chainsaws to remove fuels. Crews on the ground told CapRadio there was little damage to homes in the valley as of Tuesday evening.

The fire burning down to the homes on Santa Claus Dr and Sleighbell Way look scary…but crews tell me it’s a relatively low intensity flank. There’s confidence hand tools and hoses will keep flames at bay.

William Cottrell, a 77-year-old semi-retired physician who stayed in his Christmas Valley home despite the evacuation order, blamed poor forest management for the fire’s intensity.

“Now we’re seeing Mother Nature say, ‘All right, my turn — you’ve let [the forest] go for 100 years,” he said. “You haven’t tidied things up and you live in the wildland interface.”

Cottrell has some authority on the topic — several decades ago, he wrote a book about the science of fire and wildland ignitions. 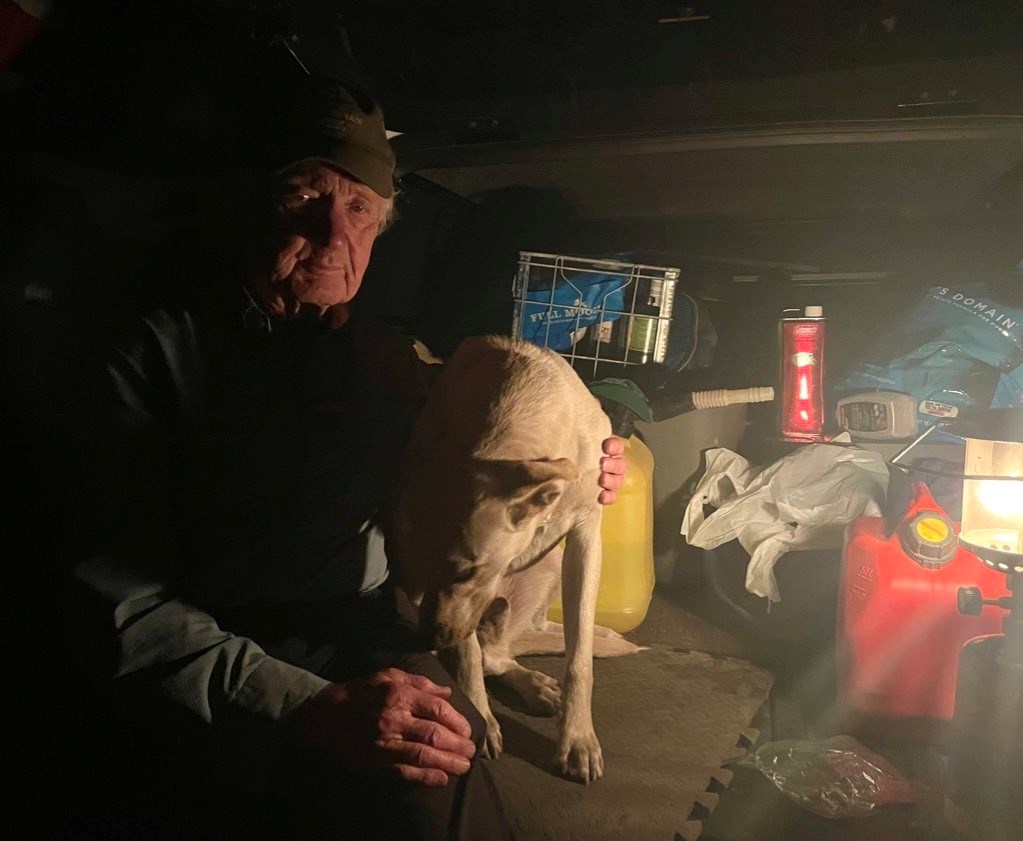 William Cottrell, resident of Christmas Valley near Lake Tahoe, stayed behind with his dog, Sherlock, despite evacuation orders.Scott Rodd / CapRadio

The combination of dangerous weather conditions, severe drought and overgrown forests has put fire crews fighting the Caldor Fire on the defensive.

“We can’t control it,” said Erich Schwab, an assistant chief with Cal Fire, at a recent briefing. “We don’t have any tools out there to stop the fire, so we [resort] to herding the fire away from structures and away from people.”

The fire is currently burning in the hills and mountainsides to the south of South Lake Tahoe, buffered by bulldozed fuel breaks. The fire has been heading east toward Nevada. Some communities in Nevada remain under evacuation orders, along with most of El Dorado County east of Pollock Pines.

Evacuation orders are still in effect for portions of Alpine and Amador county, according to Thursday morning’s Cal Fire incident update. 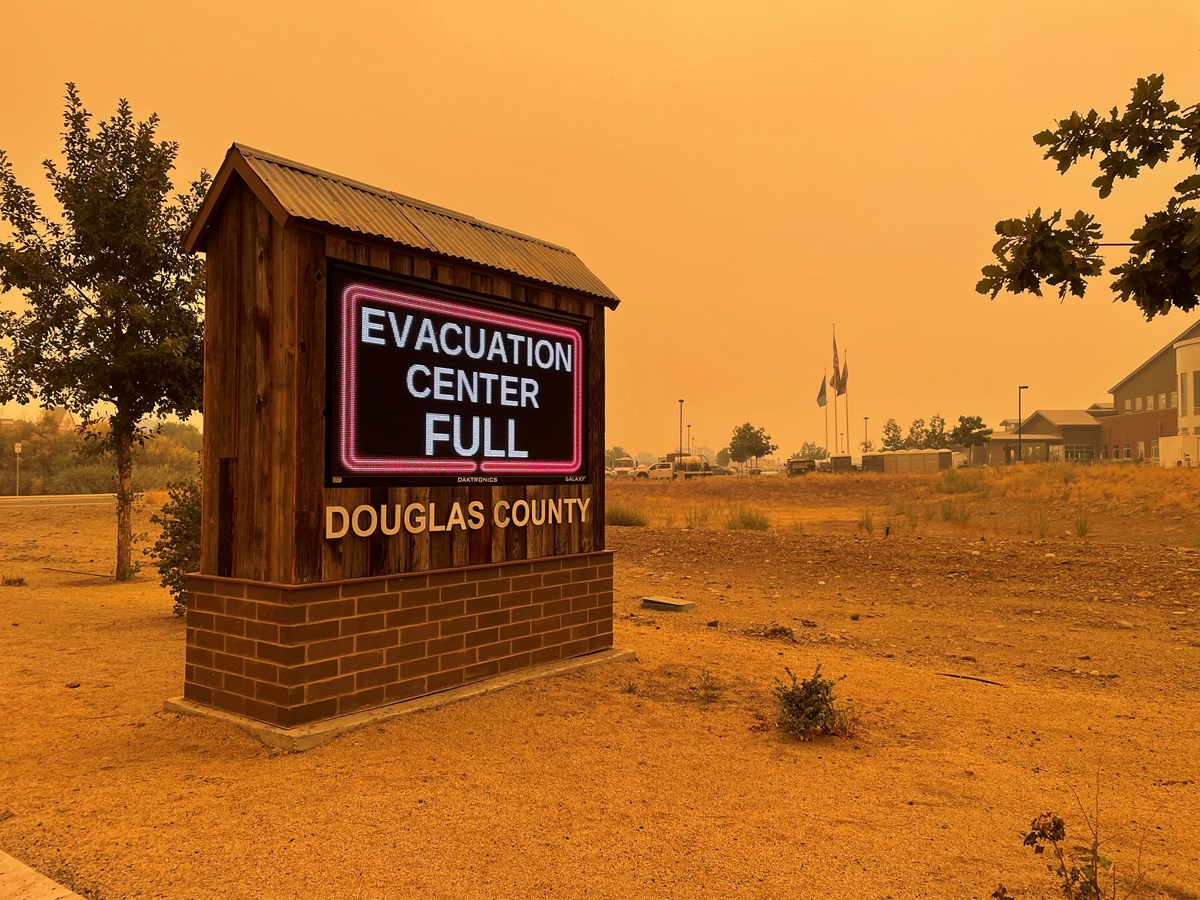 The evacuation center at Douglas County Community Center in Nevada was at capacity by Tuesday.Scott Rodd / CapRadio

Heavenly Ski Resort in South Lake Tahoe has been converted into a Cal Fire command post. Snow guns are on full blast in an effort to protect the popular resort from fire and embers.

Meanwhile, another active firefront continues to burn near the Kirkwood Resort to the south of Highway 88. Firefighters are working to keep the blaze from jumping the roadway.

Containment has increased on the west side of the fire, allowing some residents near Omo Ranch and Pollock Pines to return to their homes as some evacuation orders are downgraded and lifted.

As those communities are repopulated, some people remain stranded in South Lake Tahoe.

On Wednesday, more than a dozen people waited outside the Mont Bleu casino and hotel in Stateline near South Lake Tahoe, amid hazardous air quality. Many were indigent or unhoused, without means of transportation to leave the area. Some had stayed a few nights in the casino but said they now had to relocate to an evacuation shelter in Reno. A closer shelter in Douglas County, Nevada, was already at capacity.

Cheyenne Purrington, executive director of the Tahoe Coalition for the Homeless, was in the casino’s parking lot, working to find a bus that would bring her clients to the shelter.

“Anyone who is unhoused is already in crisis,” she said. “So then when you have a larger regional crisis, their needs become even more exacerbated.” 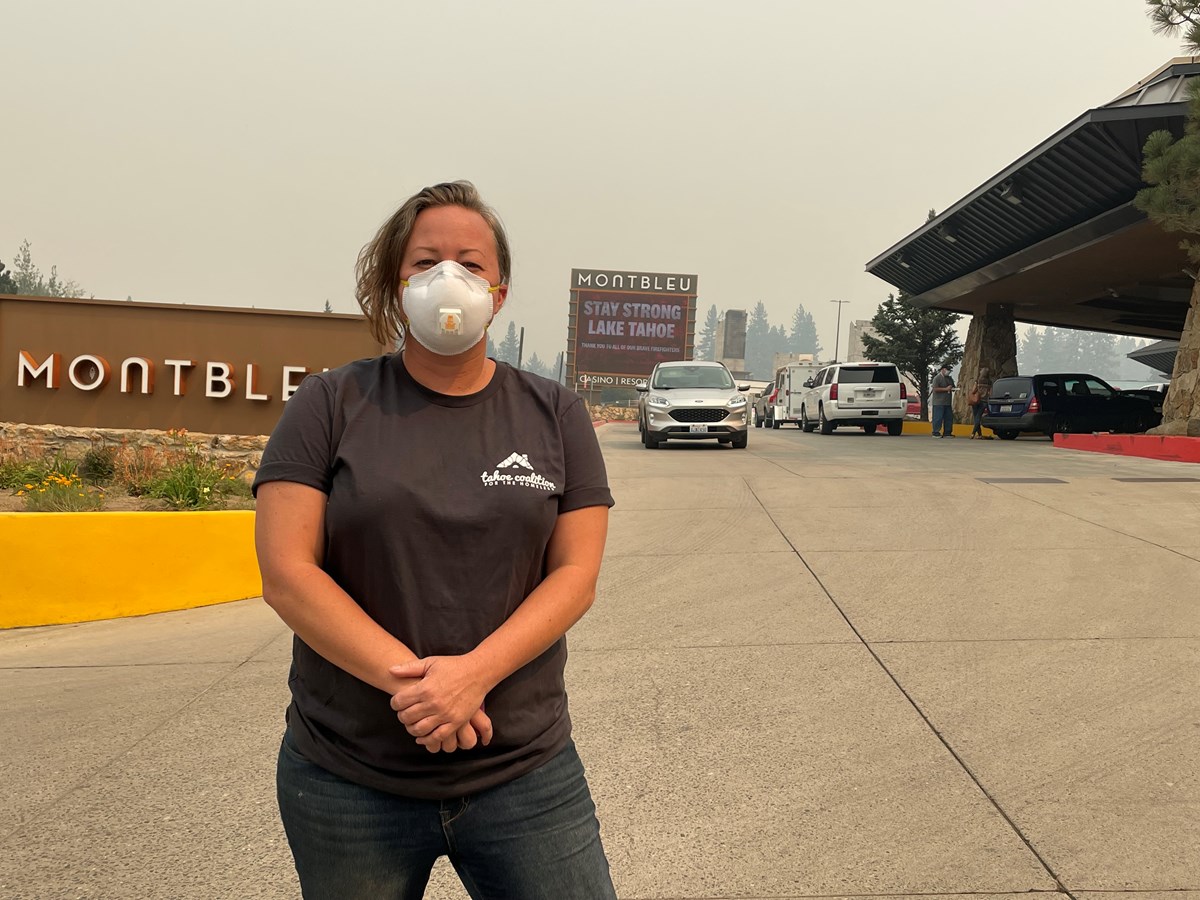 Cheyenne Purrington is executive director of the Tahoe Coalition for the Homeless and helped unsheltered residents evacuate from South Lake Tahoe.Scott Rodd / CapRadio

She said her organization was able to get dozens of clients to shelters quickly, in large part thanks to Newsom’s Project Roomkey and Homekey initiatives. The program used emergency COVID-19 money to help purchase and convert hotels and motels into transitional housing for unhoused people. The housing offers wraparound health and social services for residents.

Purrington says local emergency officials need to plan further in advance when ordering entire towns to evacuate to ensure residents without stable housing and reliable transportation can get someplace safe.