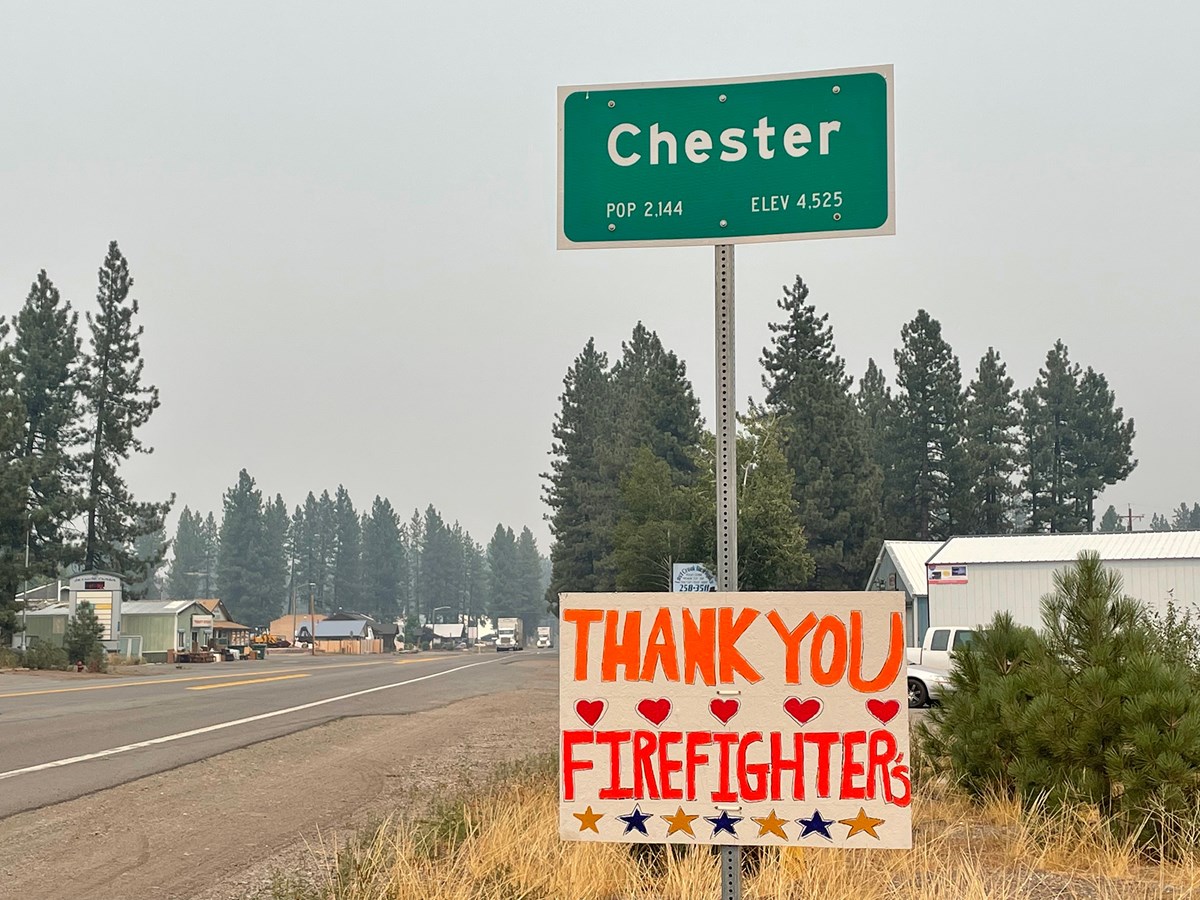 Chester survived the Dixie Fire, thanks to efforts by firefighters and its strategic location next to Lake Almanor.

The Man in Black’s words hold true for the Dixie Fire, the second-largest blaze in California’s history, at over half-a-million acres.

For weeks, the devastation — particularly the leveling of Greenville, a gold-rush era town in Plumas County — has commanded headlines and chyrons across the country and around the world. But some communities were spared from the flames, even though their stories remain largely muted.

Nestled along the west side of Lake Almanor, about four hours north of Sacramento, the small town of Chester survived a fast-approaching firefront, in part due to its strategic location on the water, and also the tireless work of firefighters. Fire maps show a remarkable anomaly in the burn zone: an arching border on Chester’s outskirts, tracing the town’s western flank, leaving homes and businesses untouched.

The town appears safe for now. But moving forward, the miles of blackened forest around Chester will hamper the natural tourism economy that keeps it afloat. Residents say they’re optimistic the town will overcome this setback. But it might take years, and the place will almost certainly look and feel different.

“Ultimately, we’ll lose some businesses,” said Plumas County administrator Gabriel Hydrick. “But in their loss, we may see others rise. So it may take some creativity, but I see the town of Chester certainly bouncing back.”

The fire front remained very active on the north side of Lake Almanor Thursday night. An evacuation order in Chester and the surrounding areas will remain in place, despite the Plumas County Sheriff’s Office previously announcing its plans to downgrade the evacuation order to a warning.

“Given the forecasted thunderstorms and associated wind conditions with those thunderstorms, the situation in Chester is very fluid,” said Daniel Bertucelli, captain PIO for Cal Fire’s Incident Management Team 3. “Last night firefighters were able to make a stand, [and] we will continue to be vigilant with our efforts in the Chester area.”

For miles west of Chester, State Route 36 is beset by an ashy forest floor and tall, scorched pine trees. Some are burnt bald from the intense fire front. Others cling to precarious “widowmakers” — firefighter parlance for dead branches that threaten to crush mere mortals below. 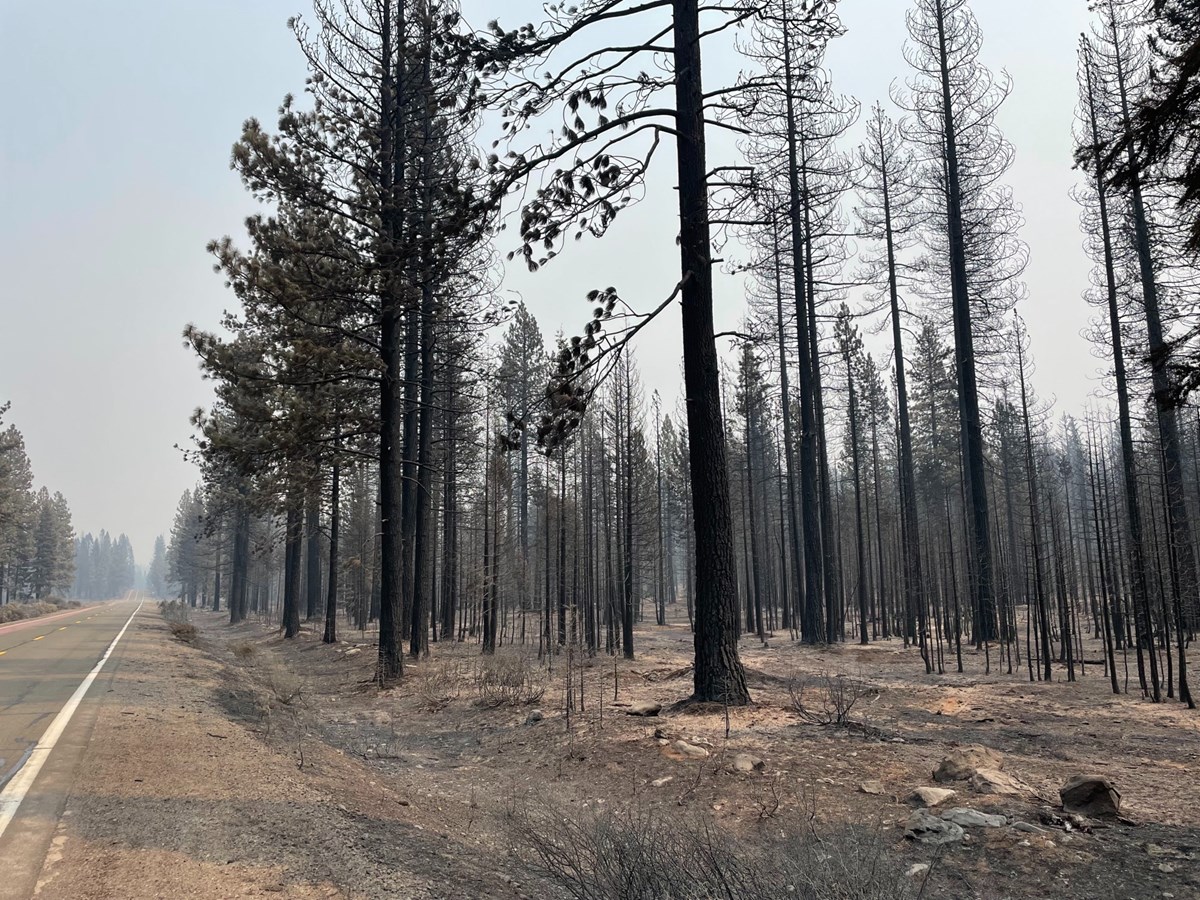 Crossing into Chester, the town sign serves as a reset. Bright green, it boasts the town’s population of 2,144 and elevation of 4,525 feet. Beyond it is more green: shrubs, leaves, branches — contrasted by the occasional splatter of bright pink retardant.

Below is a handmade sign, dotted with red hearts and gold and blue stars. It reads: “THANK YOU FIREFIGHTERS.”

“It was just tactical patrolling, really, that allowed us to save the main hub of Chester,” said Cal Fire spokesperson Edwin Zuniga.

Crews cut bulldozer and hand lines to create fuel breaks around the town, he said, and also back-burned to remove excess fuels.

Zuniga added that Chester benefited from its strategic position on the banks of Lake Almanor, leaving firefighters to defend only three sides of the town.

The Dixie Fire started in the Feather River Canyon nearly a month ago. The location of the fire triggered flashbacks to the devastating Camp Fire in 2018, which originated in the same area and destroyed the town of Paradise, killing over 80 people. But the fire burned in the opposite direction, heading north into Plumas County.

Over the next few weeks it gobbled up dense, rugged forestland heading toward Lake Almanor. The fire split into distinct fronts: to the east, the flames blew through Greenville; to the west, Chester survived.

The overall damage spells trouble for one of the region’s biggest industries.

Chester has a similar vibe as Lake Tahoe, but on a much smaller scale. The area is a second-home getaway for the wealthy and a tourism destination for outdoorsy-types. It offers ample opportunity for hiking, fishing and water sports — when Lake Almanor isn’t critically low, like this year. 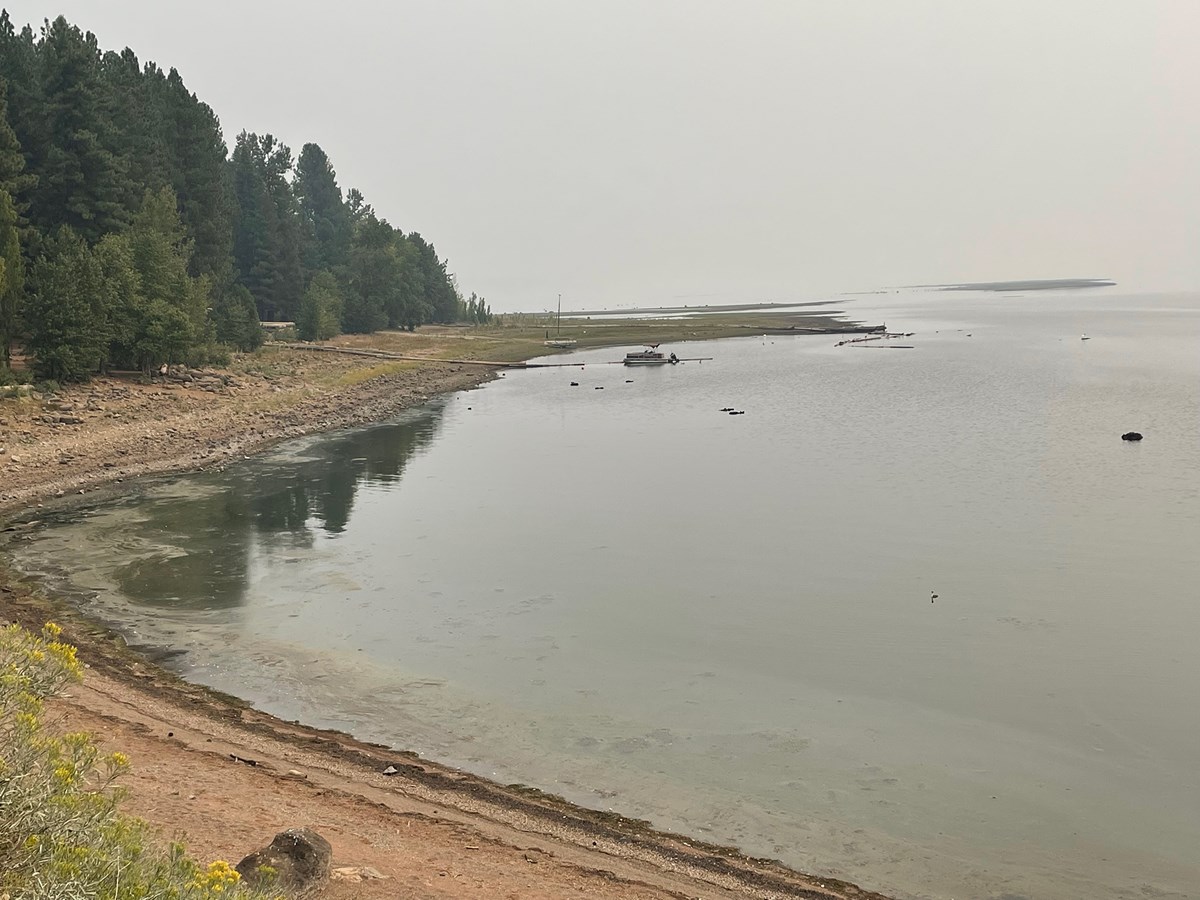 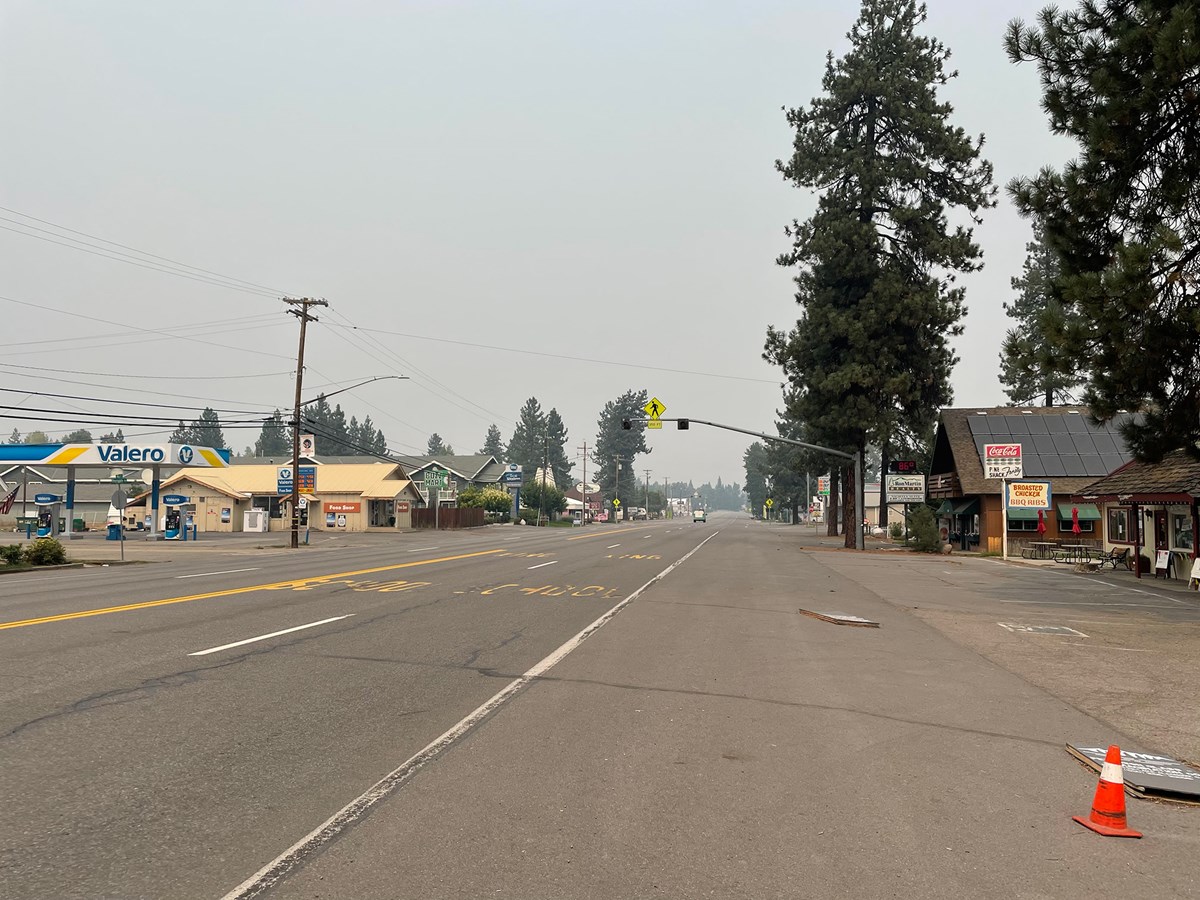 Lake Almanor, like many lakes and reservoirs in California, is very low due to the drought. The main road in Chester is largely dormant, as the town has been under evacuation orders for over a week.Scott Rodd / CapRadio

August usually means streets and shops buzzing with travelers. But Chester has been dormant for over a week, as evacuation orders prompted most to leave. Open signs hang in the windows of some businesses, but the lights are out, an indication of how quickly people fled.

But not everyone left, and not every business remained closed.

The Holiday Market has opened a few hours each night, allowing those who stayed to pick up essentials and exchange information on any fire updates.

Joe Waterman stopped in for some coffee, milk and a few frozen dinners.

“I’m cooking for myself since I sent my wife off,” he said. He added with a laugh, “I’ve lost six pounds so far through this — maybe that’s not a bad thing.”

Waterman spent roughly 40 years working for Cal Fire. The now-retired firefighter says he stayed behind to assist crews however he could.

“I helped them locate dozer line [placements],” he said. “Mainly it’s been just making sure there aren’t any spot fires within our community that we could take care of.”

Cal Fire discourages people from staying in spite of evacuation orders, according to Zuniga, even if they are trying to help stave off the fire.

Waterman says Chester’s ability to rebound will also depend on the region’s vitality.

“We’re always trying to help one another, look out for one another,” he said. “I think the effort is going to be, not just taking care of those as they come back here locally, but how are we going to take care of those in Greenville, and Canyondam? Because we’re all part of the same community.” 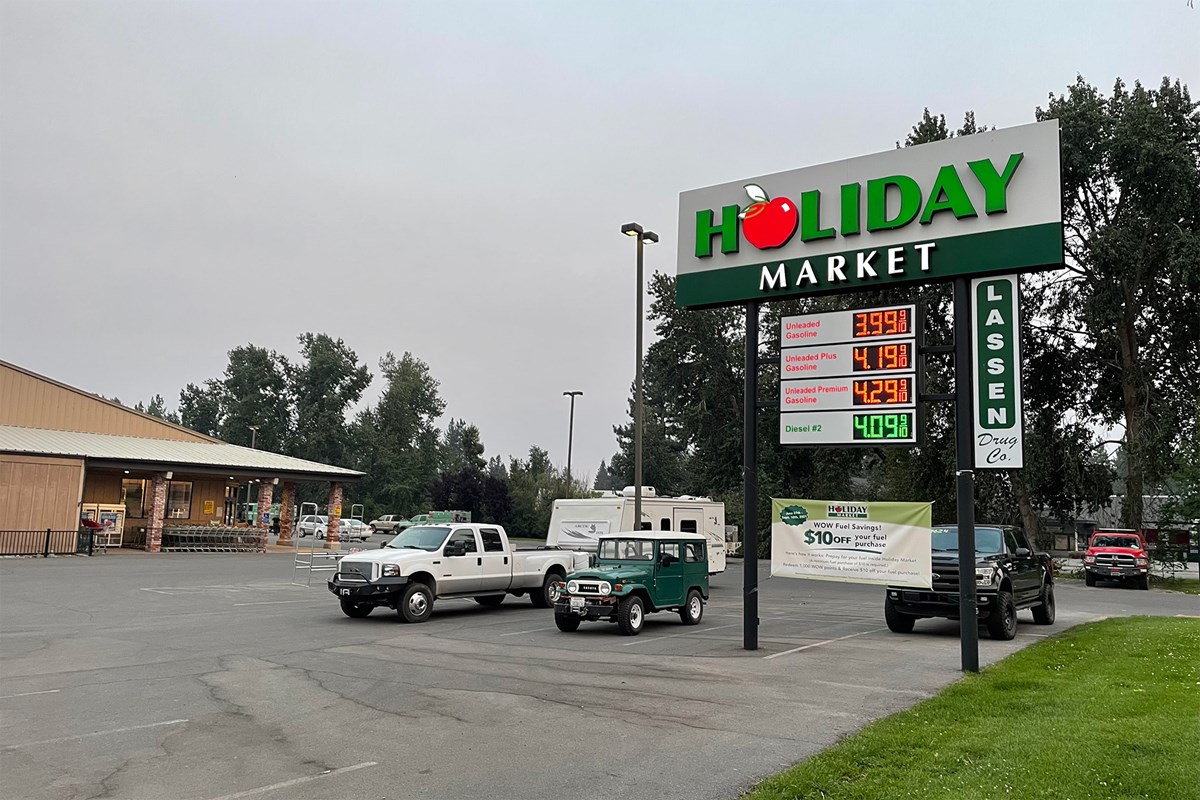 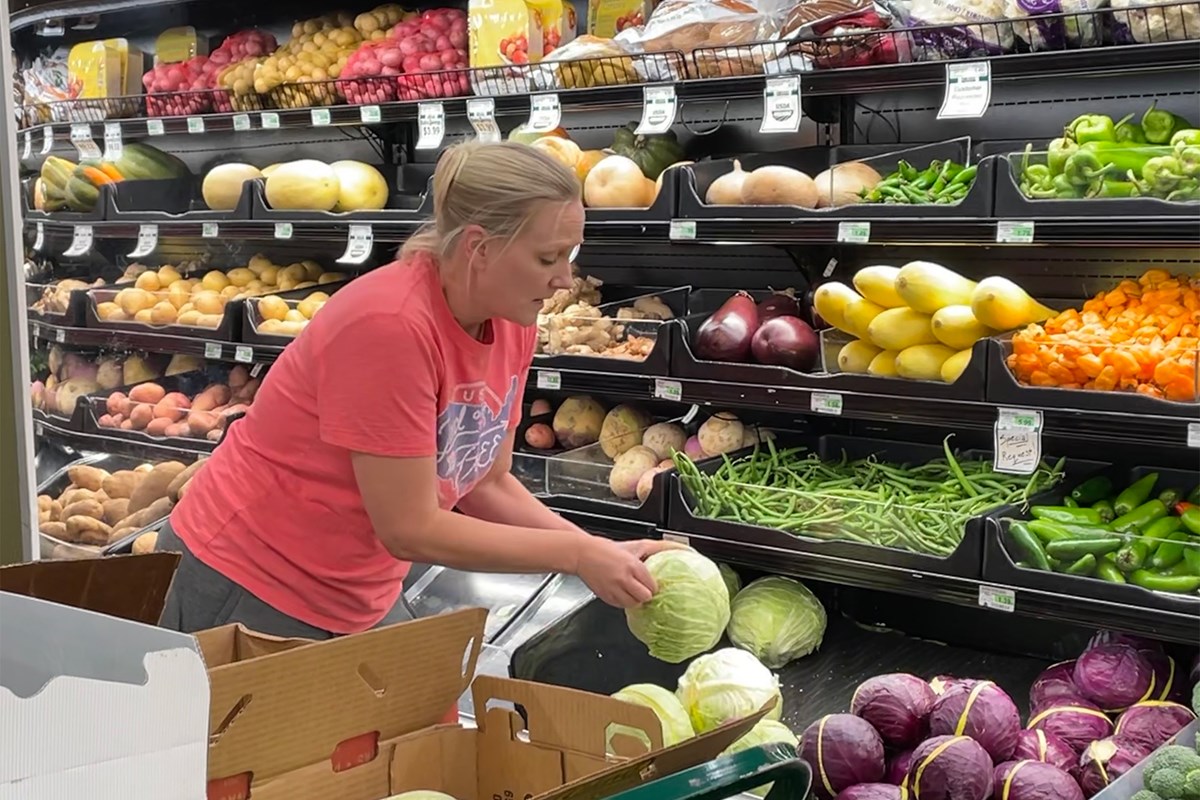 The Holiday Market has opened a few hours each night, allowing residents who stayed to pick up essentials and exchange information on fire updates. Store Manager Emily Rice sorts through produce that can be donated to evacuation centers.Scott Rodd / CapRadio

Emily Rice, store manager at Holiday Market, is already trying to balance the needs of local residents and those in more badly damaged neighboring towns.

She scrambles every afternoon to make sure the store can open for a few hours in the evening, stocking shelves and installing air purifiers to ensure shoppers are safe as they peruse the aisles.

She’s even setting aside produce unfit for evacuees that can be used to feed area livestock.

Rice has lived in Chester for over 20 years. She’s seen the town change and adapt with each passing peak-summer season. But the Dixie Fire could be one of the hardest challenges the town has ever faced.

“The clean-up process, I can foresee that’s going to be a couple years,” she said. “I think that people are going to be very leery to migrate back to the mountain towns when we’re seeing so many fires.”

Rice was the only employee in the market, furiously scanning items at the lone open register. The line of customers grew longer with every barcode beep.

A firefighter, waiting for the rest of his crew, set down his groceries to lend a hand. His yellow nomex suit was smeared with dirt and grime. Standing by the conveyor belt carrying a customer’s purchases, he snapped open a plastic bag and started to fill it.